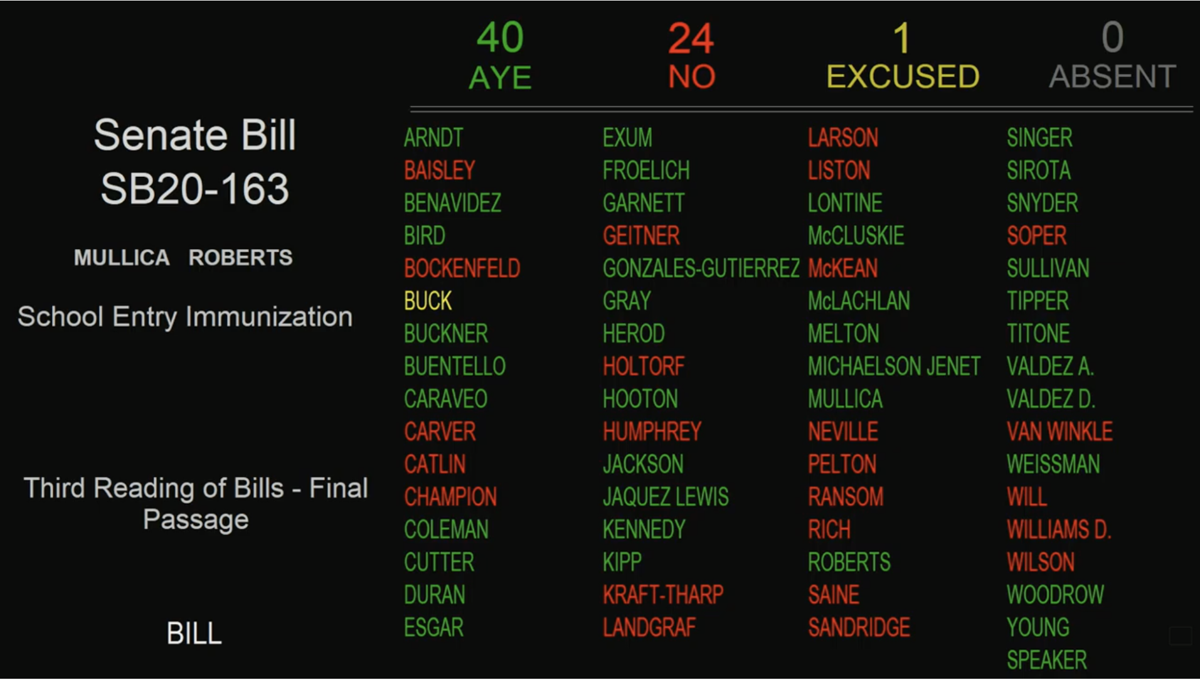 This was the vote on the school immunization registry bill that passed the House Wednesday, June 10, 2020. 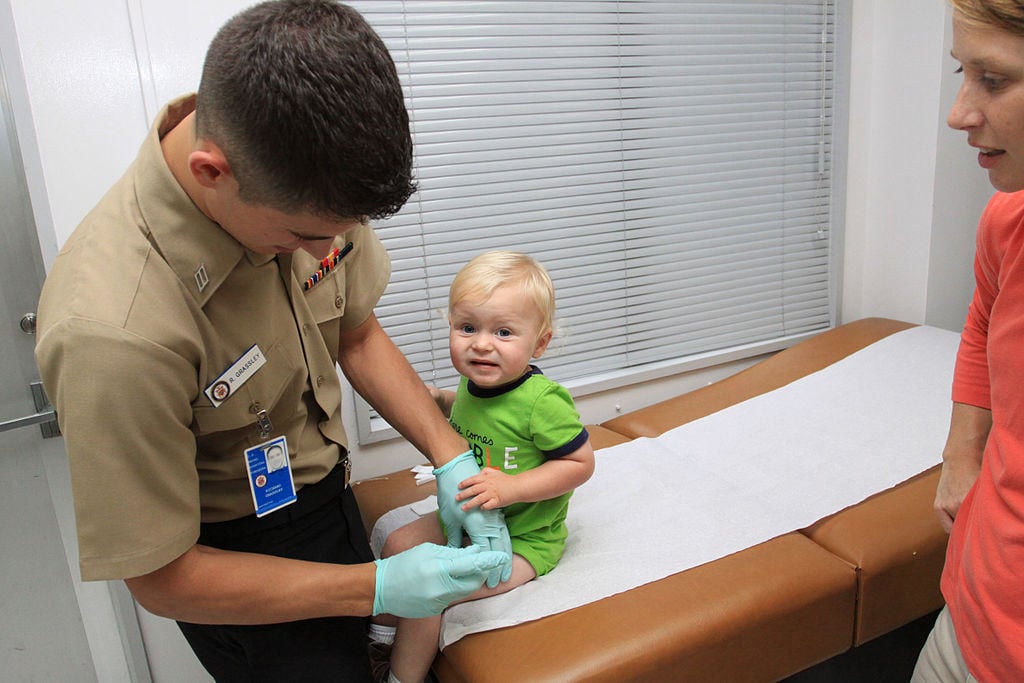 This was the vote on the school immunization registry bill that passed the House Wednesday, June 10, 2020.

The Colorado House passed a bill that will require those seeking a waiver from school immunizations to file a standard report to say why or take an online class.

House Bill 163 passed 40-24 Wednesday morning, but the legislation is still in a race against the clock, as legislative leaders aim to wrap up the session to allow members to campaign ahead of the June 30 primary.

"The status quo is unacceptable," said Kyle Mullica, a Democrat from Northglenn who is a professional nurse and the sponsor of the bill. "The status quo has gotten us to where we are today, and that's last in the country."

Republicans ran dozens of amendments tying up the entire afternoon Tuesday and much of the day Wednesday. Rep. Dave Williams, a Republican from Colorado Springs, said Wednesday he believes educating parents and getting an official signoff on opting out is the first step toward eliminating exemptions entirely.

"This bill at its core is a statement -- it's a statement of distrust for parents," he said. "I think that's a dangerous, dangerous road we're heading down."

Now that it's out of the House, the controversial bill has to return to the Senate, because the House made changes to the bill, where it is likely to draw continued opposition from the right, despite a Republican sponsor in the upper chamber, Sen. Kevin Priola of Henderson.

The bill would require parents who don’t want their children vaccinated to provide a signed note from a health care provider or to go through an online informational course from the Colorado Department of Public Health and Environment.

The bill passed the Senate 20-14 on Feb. 28, with Priola joining Democrats.

Gov. Jared Polis plans to sign the bill once it reaches his desk, the governor's spokesman said Wednesday afternoon. Polis has taken a measured approach to vaccinations, signing an executive order last year encouraging but not mandating their use while respecting exemptions.

Though the bill would help authorities track who's been vaccinated in a state database, its primary goal is to boost the state's immunization rate. Colorado lags behind other states.

Opponents say the state is stepping into parental rights, without exploring other avenues of boosting the measurements before putting an administrative responsibility on parents.

No exemptions are removed by the bill, which means parents can still claim an exemption based on religious beliefs, medical reasons or personal beliefs.

The issue has drawn protesters at the Capitol in each of the last two sessions. While the pandemic limited the fervor this year, vaccine opponents shouted at lawmakers from the House gallery Tuesday afternoon after the vote.

Republican House members continued their opposition before the vote Wednesday.

"This takes us down a dangerous path, members, when the government asserts the authority to do this to its citizens," said Rep. Terri Carver, a Republican from Colorado Springs.

She said she supports encouraging vaccinations.

"This is fundamentally the wrong way to do it," Carver said. "This is coercive. This takes us down a path of further abuse with this database and tracking."

Opponents think Democrats are forcing through a controversial bill in a session where public input is limited by the constraints of the coronavirus pandemic.

Rep. Kim Ransom, a Republican from Douglas County, said the bill is not "fast, friendly or free," which was how legislation was billed when lawmakers returned on May 26 from their coronavirus break that started March 14.

The immunization bill was anything but, she said. "This should not be a governmental decision," she said.

"I can't in good conscience cast a yes vote for 163," said Rep. Tim Geitner, a Republican from El Paso County, who said he was frustrated with the debate.

"... I don't think we necessarily gave the attention 163 certainly deserves."

Rep. Richard Champion, a Republican from Columbine Valley, said he has all his vaccinations.

"I believe in vaccinations," he said. "What I don't believe in is Big Brother telling you how to raise your child."

The plan was to have the hearing for the immunization bill on Friday, but House Republicans vowed to slow things down, which led to an all-day session that didn't break until after 5 p.m. They read newspaper articles, histories, and even a lengthy discussion of eggs. Five bills — mostly short — were read at length.

Senate Bill 163, called the School Entry Immunization bill, now goes to the House Appropriations Committee to determine if its cost is something the budget can handle. Hundreds gathered on the east steps of the Capitol to denounce it.

Opponents fought for home schooled children to be fully exempt from vaccinations, but bill co-sponsors argue that if these students participate in functions in their school districts, they should follow those district guidelines.

Lawmakers in the General Assembly have put to bed a two-year fight to boost the state's last-in-the-nation track record on immunizations.