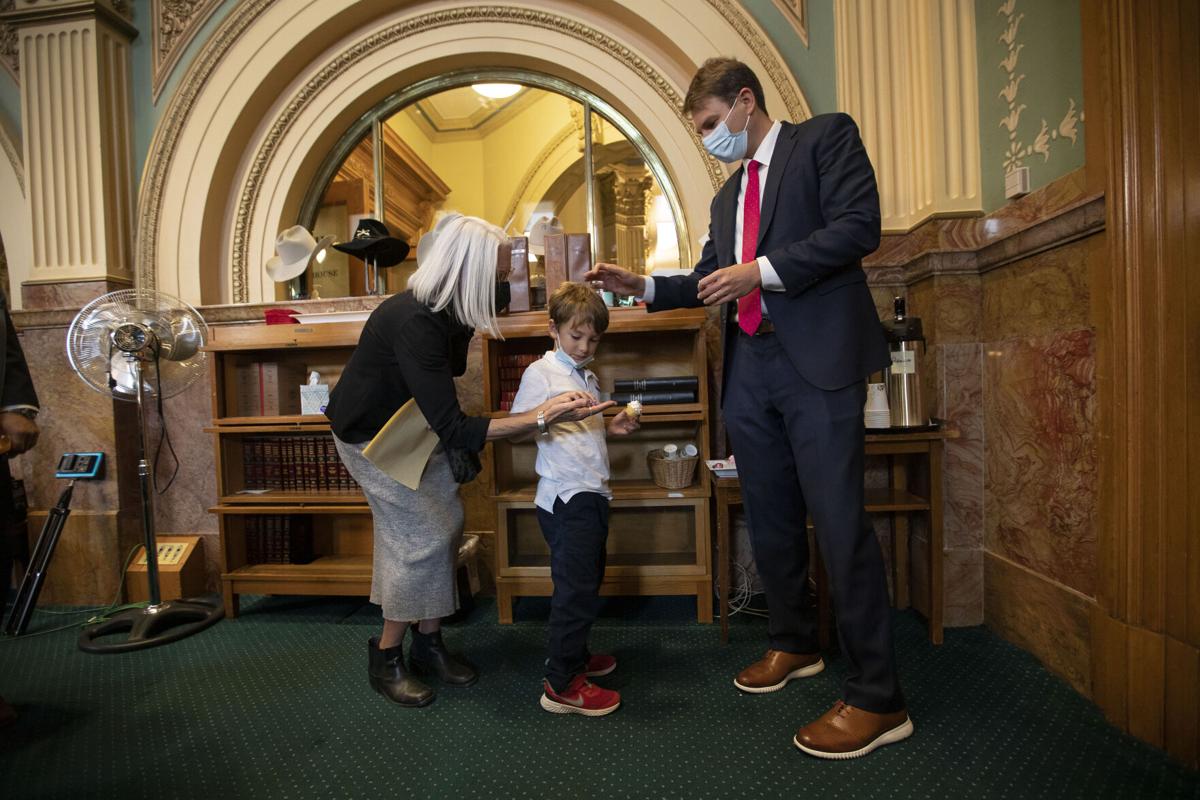 Speaker of the House Rep. Alec Garnett pats his son's head while mother Brenda Garnett hands a piece of chocolate to her grandson during a recess in the first day of legislation at the Colorado state Capital building on Wednesday, Jan. 12, 2022, in Denver, Colo. (Timothy Hurst/The Gazette) 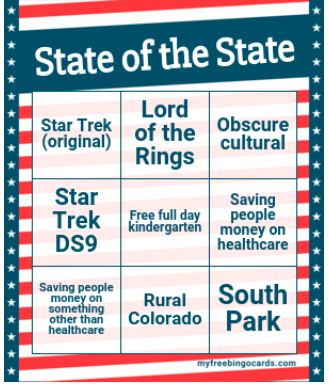 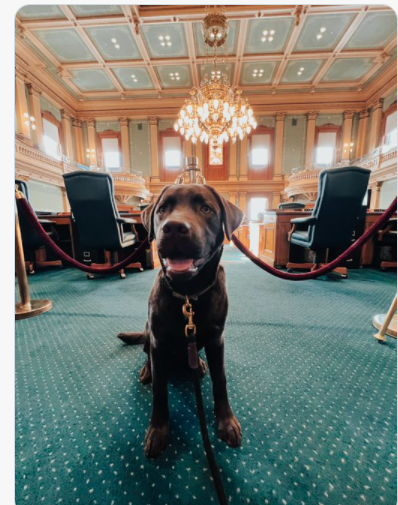 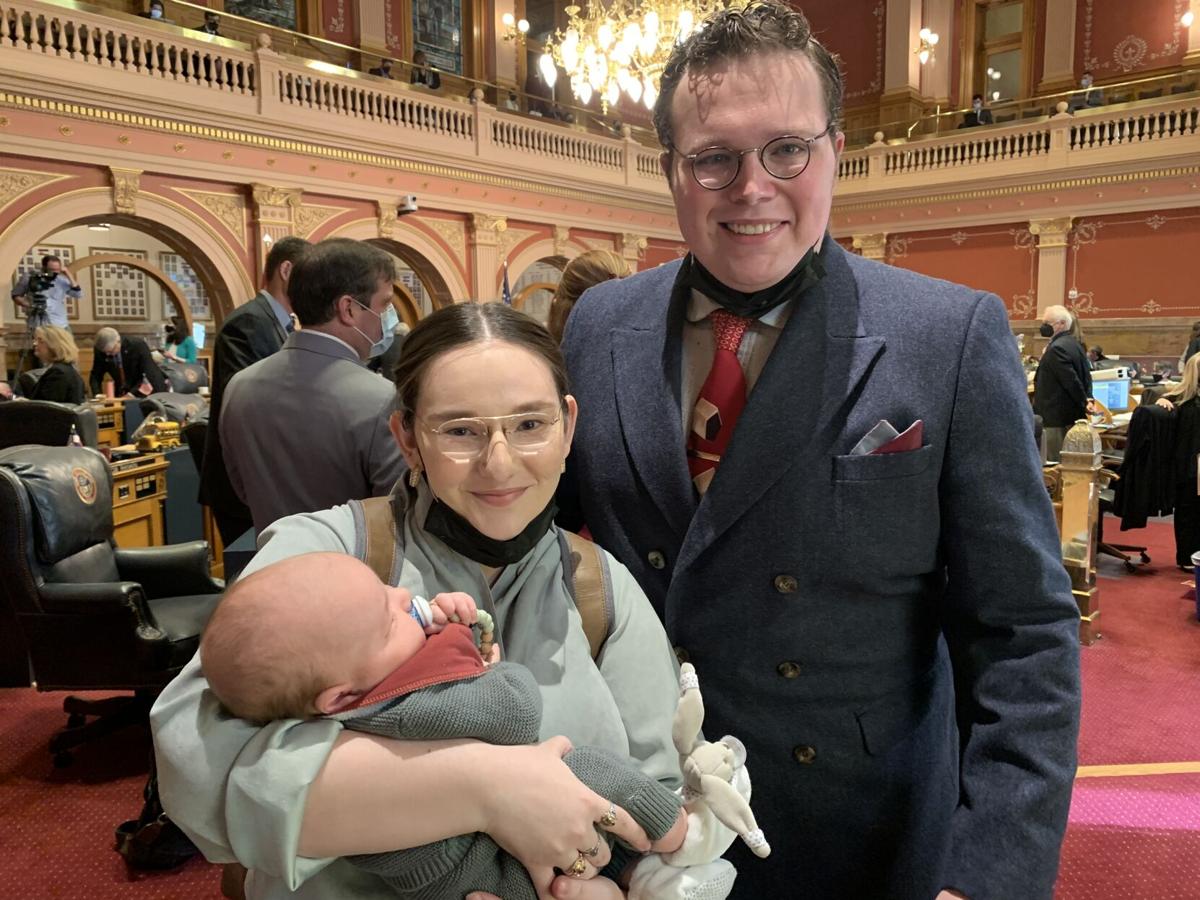 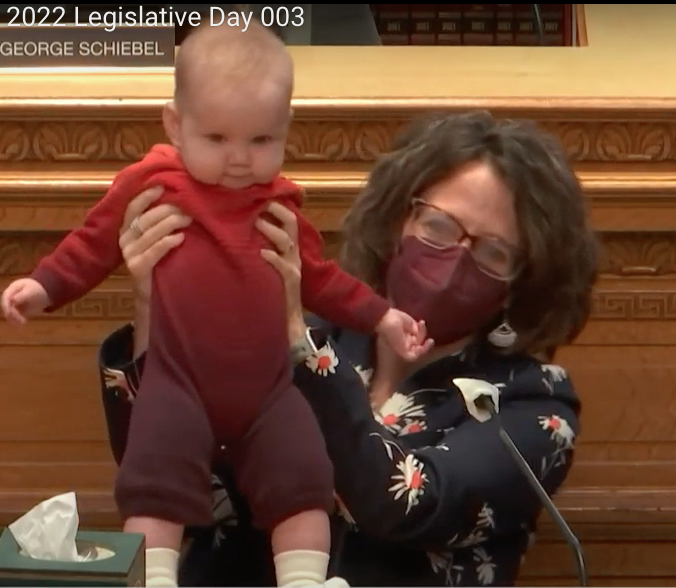 Marlo, daughter of House Majority Leader Daneya Esgar, D-Pueblo and wife Heather Palm, got her formal introduction to the House on Jan. 14. And lots of applause. Screenshot courtesy Colorado Channel. 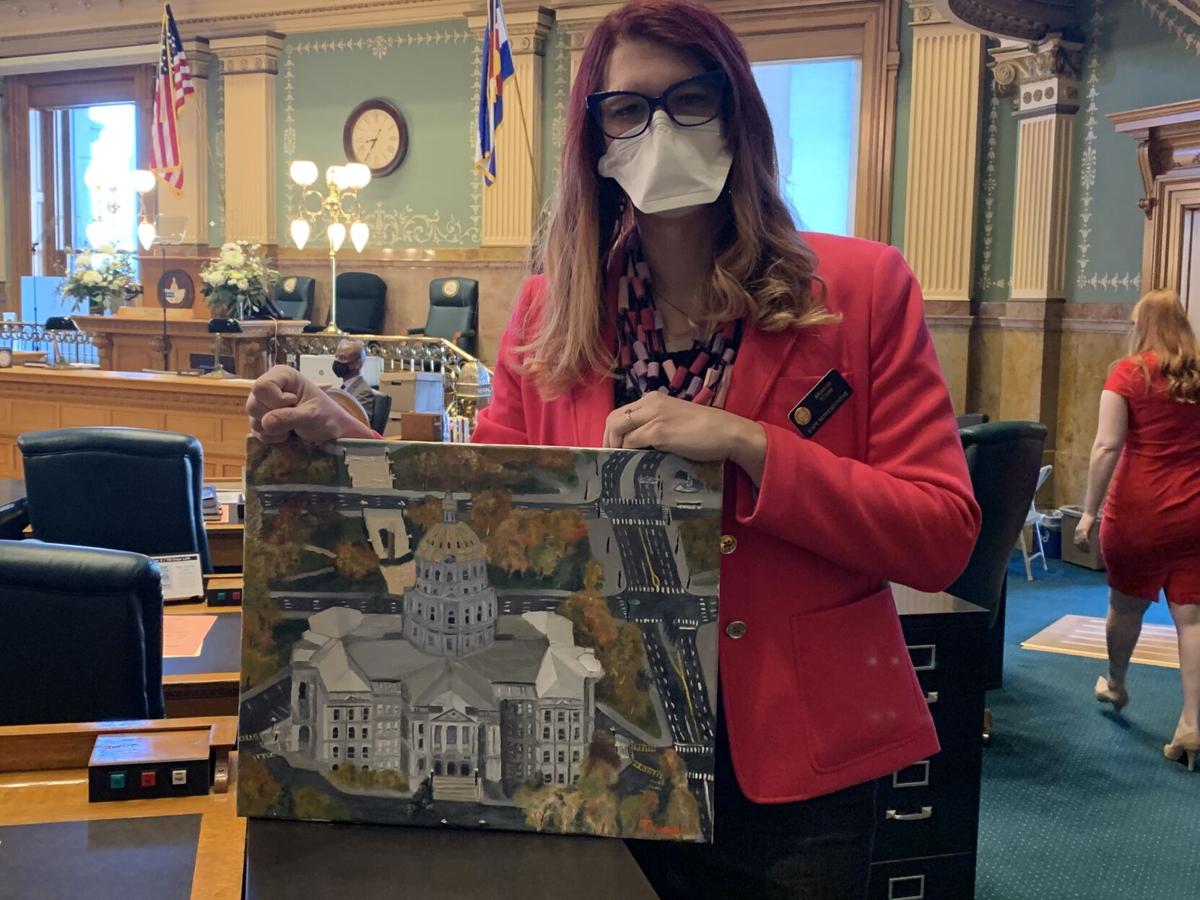 Rep. Brianna Titone, D-Arvada, shows off some of what she's been doing during the interim.

The lighter side of the Capitol, unless it isn't.

The 2022 session is off to a bang (of the gavel) and the return of lawmakers during a pandemic that does.not.ever.want.to.end.

The big question this week: how long the legislature will be able to operate before having to adjourn because of a massive outbreak of COVID. Bets among certain folks range from nine days (Jan. 21) to the end of January.

Given the crowded-like-sardines audience in the House for State of the State, or the Republican press conference on Day One when not one lawmaker wore a mask, it seems likely that the omicron variant could be considered the 101st lawmaker and could wield more power — or at least disruption — than all 100 combined.

That said, Opening Day drew past lawmakers and a new furry friend to the Capitol.

One of the comments about COVID-19 is that the "19" represents how much weight people gained from not being able to get out like they normally would. But the days of gaining appear to be over for several folks at the Gold Dome.

He isn't the only one who's been dropping weight. Rep. Rod Bockenfeld, R-Watkins, is down 100 pounds — he had hip and back work done and is walking without a cane for the first time in a while. He's doing GOLO.

Your correspondent is also down 65 pounds on the way to much more, on Noom.

Speaking of "what did you do during summer vacation" questions, Rep. Brianna Titone, D-Arvada, who does oil painting, showed off an oil-on-canvas painting of the Capitol she did during the interim.

Claremont has already done his first press conference on Wednesday. Sage, in an effort to get everyone to quiet down and get to the business at hand, brought Claremont up to the podium at the start of the presser, and there was an outbreak of OOHs and AHHs. It worked.

On Friday, the House was formally introduced to Marlo, the daughter of House Majority Leader Danyea Esgar, D-Pueblo, and wife Heather Palm. Marlo was born July 12, and she LOVED the applause.

One old dog and one new one also came to the Capitol this week — Gary, the pooch of Sen. Kerry Donovan of Vail, who has grown from a pup to an adult in the state Capitol over the past couple of years, and Rigger, the “pawlicy” advisor to the House GOP, who hangs with House GOP spox Isabelle Daigle.

Opening Day’s lightheartedness lasted about two hours. It was fun while it lasted.

Among the humor: Sen. Ray Scott of Grand Junction actually attended in person and took some ribbing for it. Scott participated remotely during most of the 2021 session, and when he announced he was present for Wednesday’s opening day, lawmakers broke into a round of applause.

Senate Minority Leader Chris Holbert said “119 days to go” when his name was called. Ya think he's ready to be back in the private sector?

Danielson’s daughter, Isabella, answered for her during roll call.

Finally, given the governor's fondness for cultural, even geeky, references, Capitol M offers the following: