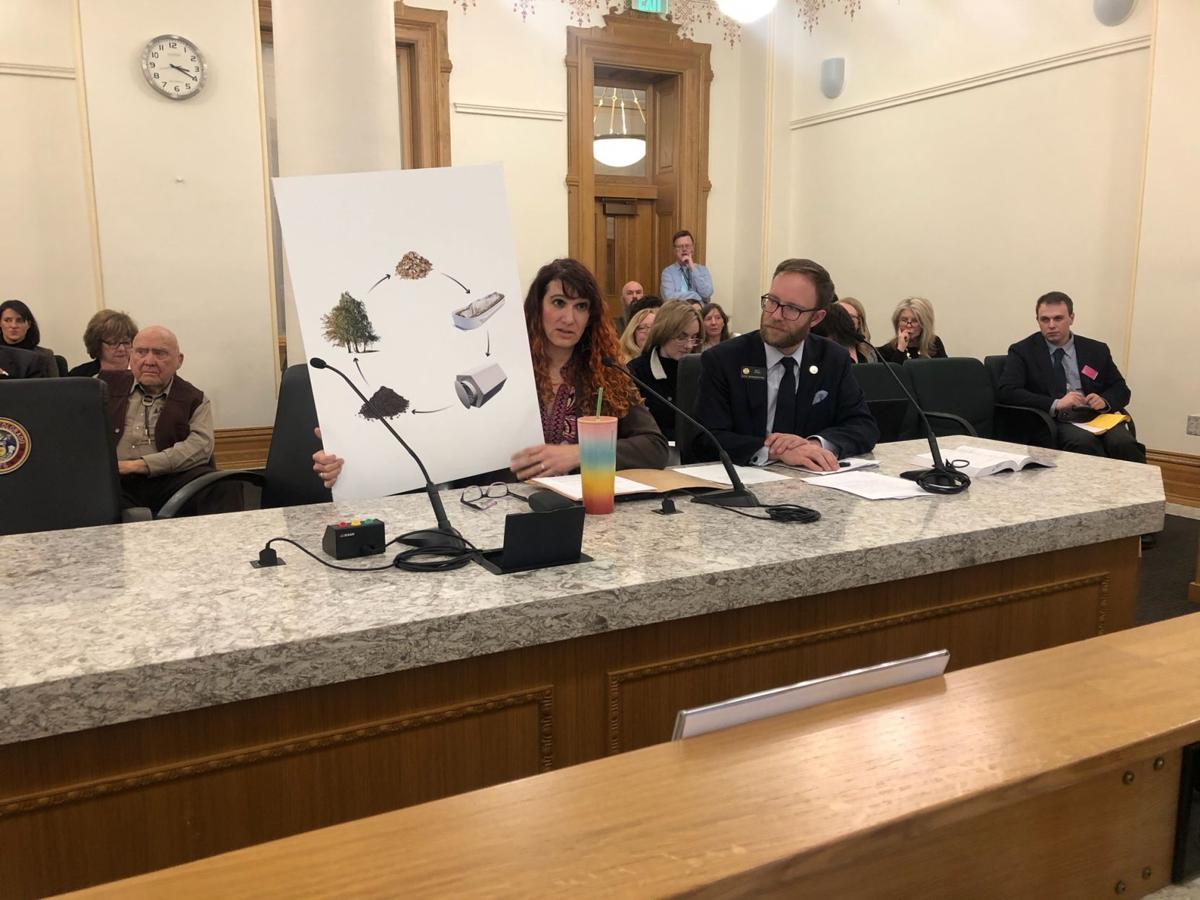 The bill that is likely to produce sophomoric humor for the 2020 session is a weighty issue that cleared the House Energy & Environment Committee Monday on a 10-0 vote.

The issue? Composting ... of dead people.

The idea is the brainchild of Katrina Spade of Washington State’s Recompose, a company that will allow the deceased to be placed in a container with wood chips and alfalfa, and then set to “cook” in its own bacteria for 30 days. What’s left is a pile of dirt, suitable for compost or gardens, so long as it’s flowers and not vegetables. (There’s an issue with metals in the human body that make the byproducts unsuitable for food plants.)

“We’re no longer human after the process is complete,” Spade told the committee. Washington lawmakers have already passed a law allowing it to begin in May. Colorado hopes to be the second state.

House Bill 1060. which would allow Colorado funeral homes to offer the service, is sponsored by Reps. Brianna Titone, D-Arvada, and Matt Soper, R-Delta. The sponsors took the two-hour hearing in stride Monday, braced for all the gallows humor that goes along with talking about death.

Formally, it’s known as “natural organic reduction,” and the process turns the deceased into soil. “It’s not for everybody,” Titone said. But she added “there is a groundswell (groans) of support for this bill.”

“It’s a grave issue,” Soper said, (more groans), one that allows for a new business opportunity in Colorado.

The process is cheaper than burials or cremation, at around $5,500, compared to $12,000 and up for conventional burials, with caskets and burial plots. Feldman Mortuary in Denver is ready to start offering the process as soon as it’s legal, according to spokeswoman Jaime Sarche.

People believe cremation is an environmentally-friendly option, although it isn’t, Sarche explained. “We don’t talk about” the environmental impact of cremation. “This [reduction process] actively feeds the Earth."

Lauren Carroll of Return to Nature in Colorado Springs, which offers cremation and “green” burial service, testified that she’s had at least two dozen calls from people interested in the process since the first news reports started appearing in December. “Coloradans are asking for this,” given that this is an Earth-conscious state, she told the committee.

The idea appeals to environmentalists, such as the Sierra Club. Decomposition in this manner, which Spade said has been common in agriculture for decades for getting rid of animal carcasses, avoids the use of embalming fluids and caskets. It also spares people, including funeral workers, from the chemical pollution caused by cremation, which can release into the air carbon monoxide, fine soot, sulfur dioxide, heavy metals, and mercury emissions from dental fillings.

The decomposition process, in contrast, uses just one-eighth of the energy required for cremation and saves one metric ton of carbon dioxide per individual, according to Smithsonian magazine, which was cited during the hearing.

Jan Douglas of the Sierra Club called natural organic reduction an important option for disposal of human remains. Each time it’s used it protects people from the harmful results of cremation, she said. And more than one million acres in the United States are devoted to cemeteries, which come with it the need for water and pesticides to keep those pristine lawns green.

“People are dying for this,” said Titone at the hearing’s conclusion, another of the groan-worthy puns scattered throughout Monday’s hearing.

Titone and Soper both acknowledged in an exchange with Colorado Politics the dark humor that permeated Monday’s hearing. "It's a heavy topic," Titone tweeted. "Our natural defense mechanism is humor. There's no disrespect to our deceased, but to make the difficult topic of death care a little bit easier to do."

Added Soper, "Humor is the easiest way to be able to talk about a very serious issue - death and what happens to our bodies. Without a few puns, it would be very emotional and hard to wrap our heads around the weighty issues we are talking about."

No one testified in opposition to the bill, and HB 1060 now moves on to the House Appropriations Committee.

Green technology could replace the graveyard in Colorado under 2020 bill

State Rep. Brianna Titone (D-Arvada) and Sen. Robert Rodriguez (D-Denver) have latched onto an idea that's getting a foothold in Washington state: a process to convert dead bodies into compost that can then be used to fertilize a garden, or in conservation efforts.