The General Assembly is looking for an extra $500 million a year to support Gov. Jared Polis's 10-year plan, which was announced last year. The legislature could pass a fee of some sort, but lawmakers would have to refer a tax hike to the ballot, because of the state's Taxpayer's Bill of Rights.

Democrats have suggested a fee on a gallon of gas or on deliveries. 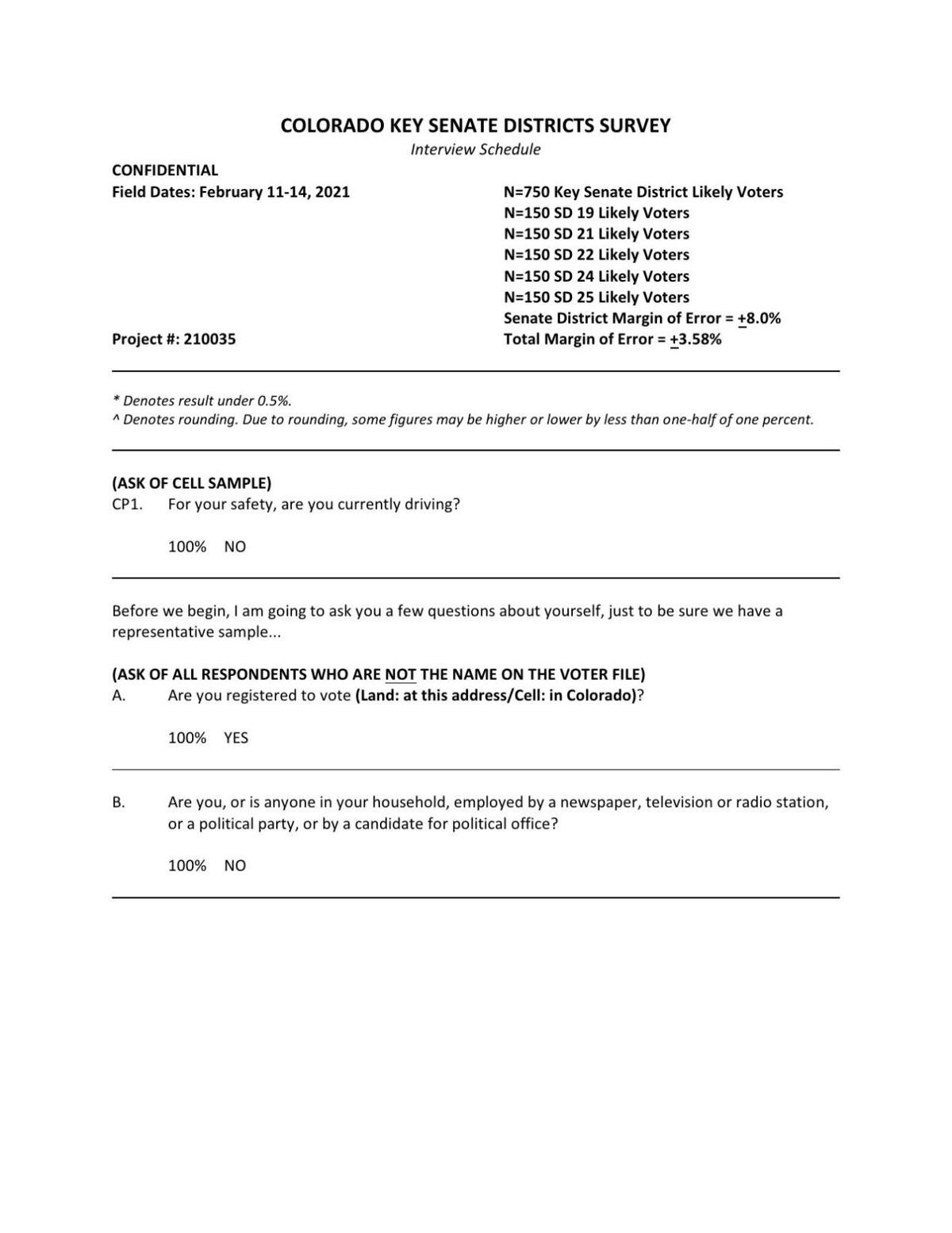 Polling in key Senate districts indicated 56% opposed paying more, compared to 38% who were in favor. Those who said they "strongly" opposed an increase came in at 42%. While those who said they were strongly in favor registered at just 15%.

"On any type of policy question like this, it's really intensity that drives this," said pollster Jim Hobart from the Republican firm Public Opinion Strategies. "When you look at the opposition and it's essentially 3 to 1 in favor of the opposition, it just shows how sharply unpopular this proposal is."

For a fee on deliveries:

The polling including 150 people from five state Senate seats, two considered safely Democratic and three that are prone or likely to flip parties.

Joey Bunch: "Most folks have something they geek out about. One of mine is highway funding."

They were all interviewed by live interviewers — half by cell phone, half by landline — between Feb. 11 to Feb. 14. The poll has a margin of error of plus or minus 3.58%.

All five districts are in the Denver metro area in Adams and Jefferson counties. Priola is the only Republican on the list, and his district is considered a swing seat.

STATE OF THE STATE | Polis lays out path back to prosperity

"A candidate in any of these five districts who supported these new fees would be appealing only to base Democrats, while simultaneously alienating independents and soft Democrats," pollsters said in the summary given to reporters. "Put simply, backing either of these fees is a political nonstarter."

Jesse Mallory, the state director of Americans for Prosperity, said pollsters didn't offer residents alternatives to higher fees, but rather simply whether they were willing to pay more.

Mallory, the former state Senate chief of staff, said the legislature is throwing out mixed messages on helping people at the same time they're talking about raising money through fees.

The Colorado Politics statehouse team took a look at five issues that are likely to dominate the discussions for however long the session lasts.

"Coloradans are either people who desperately need help during this pandemic, or they're people who can afford to pay more," he said. "It's not either/or. I hope the legislature understands this isn't just Jesse Mallory saying this is a bad proposal and people don't want it. I want to give them the information so they can see, hey, their district is not supportive of this."

Republicans and Democrats alike acknowledged the needs caused by Colorado's growth — the Hickenlooper administration set the deficit at $9 billion — but they haven't been able to agree on how to raise the money for the long haul.

Democrats are leery of investing hundreds of millions of dollars annually, when schools and state services are also in dire need, as well. If the state borrows the money, the debt payments will become those needs in lean times.

Democrats routinely say in debates that while they're eager to address transportation, they're not willing to do it on the financial backs of children and poor people.

INSIGHTS | What we spend on roads is overly complicated

Winter, the Senate transportation chair, is a Democrat from Westminster. Pettersen and Zenzinger also are on the committee.

“Colorado’s transportation stalemate has lasted far too long. For decades special interests have been spending millions to curtail progress and derail negotiations, so it’s no surprise they’re at it again,” Winter said in a statement. “The truth is Coloradans don’t want to spend another minute wasted in traffic. They want real solutions, which is exactly what we are proposing. If everyone who uses the roads pays just a few cents more, we could collectively address our state’s growing pains and future-proof our transportation system in a sustainable way.

"I am incredibly proud of the collaborative, problem-solving approach we have taken. Instead of standing on the sidelines throwing rocks, we have confronted the issue head-on and crafted a path forward that doesn’t overburden one group versus another.”

Rep. Matt Gray, D-Broomfield, is the vice chair of the House Transportation Committee.

“It’s not news that the special interest group that has stood in the way of pragmatic transportation proposals in Colorado for years is standing in the way of our common sense approach yet again," he said in a statement regarding the poll. "This is what they do.

"They are choosing to sow division rather than coming to the table to help us find a workable, sensible solution to our state’s project backlog. If we’re going to solve this thorny issue, Colorado needs good faith actors coming to the table with solutions despite those dedicated to standing in the way.”

The poll found that 54% of in the five districts think the state is headed in the right direction, compared to 37% who think it's on the wrong track.

Democratic Gov. Jared Polis got quite a boost from the conservative group's poll: 61% approval to 30% disapproval.

"Those are pretty solid numbers in the these five districts," Hobart said. "... The governor is very, very popular with Democratic voters, both soft Dems and base Dems, not as popular with Republicans, especially base Republicans."

An earlier version of this story said incorrectly that Matt Gray was the chair of the House Transportation Committee. He is the former chair and current vice chair.