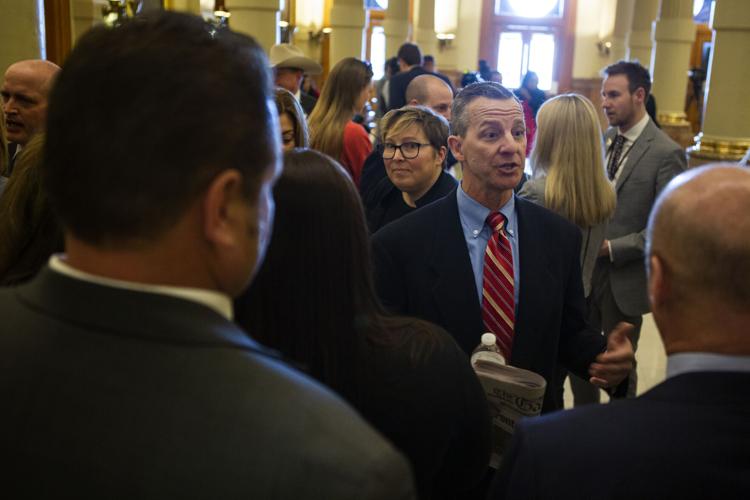 Matt Riviere, who lost both of his sons in the same night to fentanyl poisoning, speaks with other parents and lawmakers after a press conference to introduce a bipartisan bill to address penalties for distributing and manufacturing fentanyl on Thursday, March 24, 2022, in the West Foyer of the Colorado State Capitol building in Denver, Colo. (Timothy Hurst/The Denver Gazette) 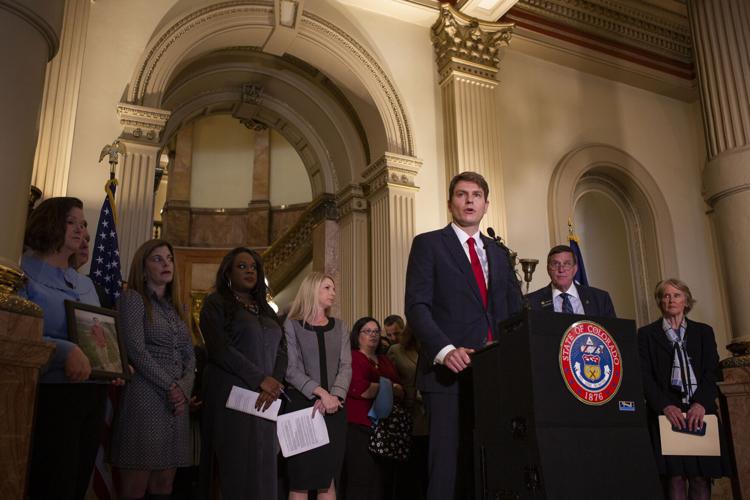 Speaker of the House Rep. Alec Garnett speaks during a press conference to introduce a bipartisan bill to address penalties for distributing and manufacturing fentanyl on Thursday, March 24, 2022 in the West Foyer of the Colorado State Capitol building in Denver, Colo. (Timothy Hurst/The Denver Gazette) 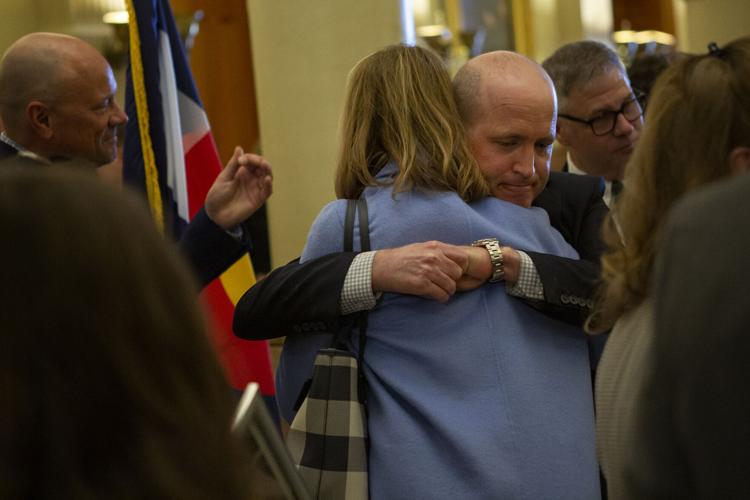 Bridget Young, who lost her son Alex when he was 24 years old to fentanyl poisoning, hugs Adams and Broomfield County's District attorney Brian Mason after a press conference to introduce a bipartisan bill to address penalties for distributing and manufacturing fentanyl on Thursday, March 24, 2022 in the West Foyer of the Colorado State Capitol building in Denver, Colo. (Timothy Hurst/The Denver Gazette)

The Senate Friday, on bipartisan lines, approved a sweeping measure that seeks to confront Colorado's fentanyl crisis by making it a felony to possess 1 gram of an illicit substance that contains the deadly drug.

The full Senate approved House Bill 1326 on a 24-8 vote, a day after the chamber decided that prosecutors shouldn't have to prove users knowingly possessed the drug in order to charge them with a felony offense. The vote included "no" votes from three Democrats and five Republicans, and three excused.

The revision is the most significant and far-reaching change to come out of the Senate's work on the legislature's response to overdoses, which surged nationwide over the past several years, as fentanyl, which is stronger than heroin and lethal in small doses, became an increasingly dominant presence in the illicit drug market. In Colorado, more than 800 people died after ingesting fentanyl in 2021, according to state data.

Senators on Thursday rejected the push to make it a felony to possess any amount of the drug, a law enforcement priority. Instead, they kept the felony threshold in the bill at 1 gram, up from 4 grams in current statutes. They also shot down efforts to tighten penalties for repeat offenders and to set sentencing requirements for dealers whose wares lead to someone's death.

On Friday, co-sponsor Sen. John Cooke, R-Greeley, who noted the nine-hour debate on the bill, said fentanyl is such as deadly drug, with so many dying from the poison, that something has to be done.

"We're at a turning point ... we have a chance to get it right," he said, adding the bill was improved during Thursday's debate.

He also maintained that enforcement is just a small part of the measure, and most of its provisions deal with harm reduction strategies.

Tearing up, Sen. Brittany Pettersen, D-Lakewood, said she has been working on the issue of opioid addiction for seven years. Like so many families, she said, it was because of personal experience — her mom's addiction in her case. That work has largely focused on addressing the state's policy failures on prescription drugs and lack of access to care, she said.

Opioid addiction cost her and her brother their childhood, she said, sobbing, adding they thought their mom chose drugs over her children. Her mom began to overdose at a high rate in 2016. At one point, she wound up in the hospital in critical condition, hooked up to ventilators for 11 days and with organ failure. She survived but went back on drugs and to the emergency room, Pettersen said.

After overdosing three times in one day, Pettersen obtained a court order to get her mom into inpatient treatment, and that's how she finally broke free from addiction. She's been clean for almost five years now, the Lakewood legislator said.

"I think often about how lucky I am and how many families don't have that same opportunity," she said.

There are 450 people on wait lists for treatment, most of them addicted to fentanyl in a state ranked second in the nation for lack of access to treatment, Pettersen said.

"These families are pledging that we act. They are fathers, mothers, sisters, brothers, sons and daughters," she said. "We cannot let this continue."

Sen. Dennis Hisey, R-Colorado Springs, told the Senate that the amendment removing the "known or should have known" language moved him from opposition to support.

Addiction is brutal, said Senate Minority Leader Chris Holbert, R-Douglas County, who talked about how some of his family members fell into addiction.

"As a kid you feel like it's your fault," Holbert said, adding he fought hard not to start crying while he listened to Pettersen. He recounted how he felt when an intoxicated relative said, "The gun isn't loaded" and then proved it by firing.

"Have you ever had that ringing in your ears when the bullet flies past your head and didn't hit you?" he asked.

Fentanyl is deadlier than alcohol, and it is a threat to national security, Holbert said.

"This is doing the best we can on addressing this horrific problem," he said.

Sen. Paul Lundeen, R-Monument, who said lowering the felony charge for possession to zero gram would move him from a "no" to a "yes," cited a Colorado Politics story from a former drug dealer who also advocates for the zero tolerance approach. He thanked the sponsors for the "incredibly heavy policy lift," which he said is harder to bear when there are personal experiences that bring emotional weight to the challenge. He called the effort "almost spiritual."

Allowing possession under 1 gram is still a problem, said Sen. Barbara Kirkmeyer, R-Brighton. One pill – half a pill –  can kill, she said, noting on that issue, "the bill is working around the edges."

She cited law enforcement's position, saying there's no incentive for defendants to agree to treatment or to help get drug dealers off the street, and the bill falls short of protecting communities.

Sen. Julie Gonzales, D-Denver, countered that not everyone who lost a loved one to fentanyl agrees that "felonization" is the answer. She lamented that law enforcement couldn't even make a phone call to investigate the deaths of those lost to fentanyl, attributing that lack of attention to stigma.

This bill will increase the stigma and shame because of the Senate amendment on "knowing," Gonzales said, adding the bill will make it more difficult for people to come forward to obtain Naloxone or testing strips.

"This will save many lives," countered Pettersen, who asked for a "yes" vote for the families.

The view from the streets: A former drug dealer tells his story

The Colorado legislature's struggle on how to deal with fentanyl possession took another turn Thursday, when the state Senate decided that prosecutors shouldn't have to prove that users knowingly possessed the drug in order to charge them with a felony.