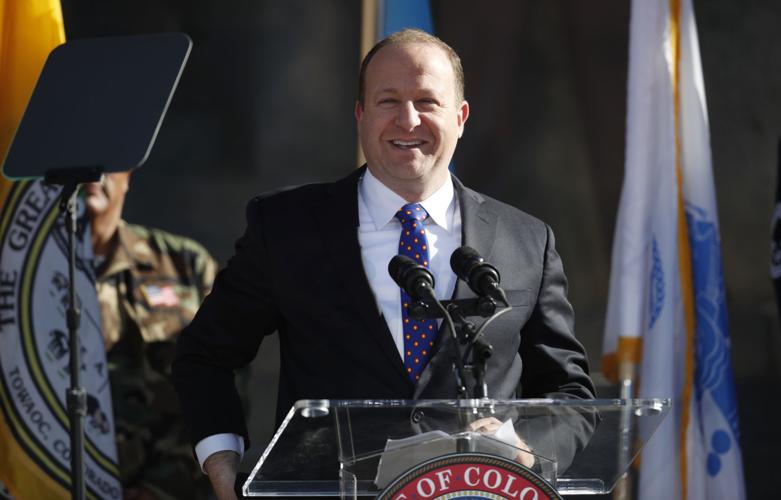 Colorado Gov. Jared Polis steps to the podium to deliver his speech after taking the oath of office to become the state's 43rd governor during his inauguration ceremony Tuesday, Jan. 8, 2019, in Denver. 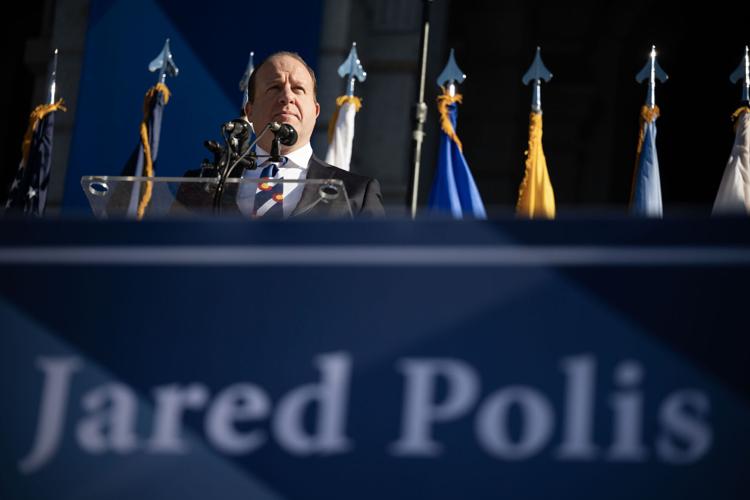 Colorado Gov. Jared Polis steps to the podium to deliver his speech after taking the oath of office to become the state's 43rd governor during his inauguration ceremony Tuesday, Jan. 8, 2019, in Denver.

Jared Polis was sworn in for his second term as governor of Colorado on Tuesday, marking four years since he entered office with the promise of creating a "Colorado for all."

Far from being the state's most prominent leader as he is today, Polis stood in front of the Capitol on Jan. 8, 2019 and vowed to spend the next four years changing Colorado for the better, declaring "now, we will get to work."

Of course, nobody could have anticipated the COVID-19 pandemic, which upended people's lives two years ago, and, to some extent, derailed leaders' best laid plans. So, with Polis' second inaugural address in the books, how did the promises of his first address hold up?

No. 1: "We get to work building an education system that provides every child with the education they need to unlock the bright future they deserve — beginning with high-quality early childhood education."

During his State of the State address two days after his first inauguration, Polis identified providing free, full-day kindergarten as his "top priority" to accomplish in the year following his election. He quickly succeeded, signing a bill for state-funded full-day kindergarten in May 2019, and implementing the program the following August.

Some of Polis' other early promises around education included offering student loan relief for teachers, increasing transparency and protections in the student loan process and investing in student mental health — all of which have been addressed in legislation in recent years.

Within the broad goal of health care reform, Polis started with three policy proposals: Import low-cost prescription drugs from Canada, establish a reinsurance program to reduce health insurance premiums, and empower the Division of Insurance to protect and support consumers facing high health care costs in rural and mountain communities. The latter two goals were achieved in the 2019 legislative session, while the state is still working towards the Canadian Drug Importation Program. After passing initial legislation to establish the program in 2019, the state most recently submitted a proposal to the U.S. Food and Drug Administration in December, seeking approval to import prescription drugs from Canada.

In a similar vein, Polis called for a paid family and medical leave program for Coloradans. He signed a study on the Family Medical Leave Insurance Program into law in 2019, then received voter approval in 2020. All Colorado employers are now required to contribute to the program as of Jan. 1 of this year.

Polis also began his first term aiming to "get a grip on the opioid epidemic," lamenting the more than 550 Coloradans who died from opioid overdoses in 2017. Though he did not name specific policy proposals, Polis vowed to work across the aisle on addiction prevention and treatment. While Colorado has since funded and created numerous programs targeting addiction, the opioid epidemic has only worsened in the last four years. In 2021, more than 900 Coloradans died from overdoses involving the synthetic opioid fentanyl, making up nearly half of the 1,881 total drug overdose deaths that year.

No. 3: "We get to work building an economy where Coloradans from all backgrounds have the opportunity to pursue good-paying, fulfilling careers and pay less in taxes."

Polis has made some strides toward lowering taxes, including ending income tax on social security, eliminating sales tax on diapers, and gradually cutting income and property taxes. He has also openly supported efforts to reduce the state income tax to zero — which has resulted in two successful ballot measures reducing the state income tax rate in 2020 and 2022.

Last week, Polis proposed spending $900 million to fight escalating property taxes in his 2023-24 budget plan, which has yet to be approved by the Legislature. Property owners face a sharp increase in property taxes expected to be in the billions of dollars — unless the state more aggressively intervenes to help them.

Also specified in his economic goals was expanding broadband access throughout the state to provide residents with better access to education and work opportunities. Polis recently kicked this effort into high gear, releasing a plan in October to connect 99% of Colorado households to high-speed internet in the next five years. During this time, Colorado is expected to invest between $400 million and $700 million of federal funds in broadband. In December, the federal government approved Colorado’s plan to invest $170.8 million in broadband infrastructure, connecting 18,000 new households and businesses.

Other specific policy promises included capping the vendor fee for retailers and identifying funding to upgrade Colorado's roads, highways and public transit systems. Polis signed legislation to achieve these goals in 2019 and 2021, respectively. However, in making these changes Polis also increased the vendor fee from 3% to 4%, and established a 2 cents-per-gallon fee on gasoline to help fund a $5.4 billion, 10-year plan to improve roads and transit projects.

No. 4: "We get to work protecting our precious air, water and land — and making sure that every Colorado family can live a great Colorado life with clean air and cheap, abundant renewable energy."

One of Polis' primary campaign issues was transitioning Colorado to 100% renewable energy by 2040. In July, the state announced that it was "well on its way" to achieving that goal in response to a biannual progress report. The report found that the state had invested nearly $270 million in the first half of 2022 on electric school buses, air quality monitoring and enforcement, clean air and decarbonization grants, eBike rebates and programs, building electrification, green rebuilding after disasters, geothermal energy, free transit fares during ozone season, aerial monitoring of industrial emissions sources and expanded public transit. Last winter, Colorado agreed to develop a regional clean hydrogen hub with New Mexico, Utah and Wyoming, and Polis' new budget proposal includes $120 million in clean energy tax credits.

Lastly, Polis committed to identifying a funding source for the Colorado Water Plan — created by Polis' predecessor John Hickenlooper in 2015 to serve as the state's framework for solving its water challenges. While Polis did sign legislation to partially fund the plan, the state under Polis has never fully funded the Water Plan, under which it is supposed to set aside $100 million a year starting in 2020. In addition, Colorado has continued to struggle with drought conditions in recent years, particularly along the Colorado River Basin.

Here are some of this week's top quotes from inside of the state Capitol.