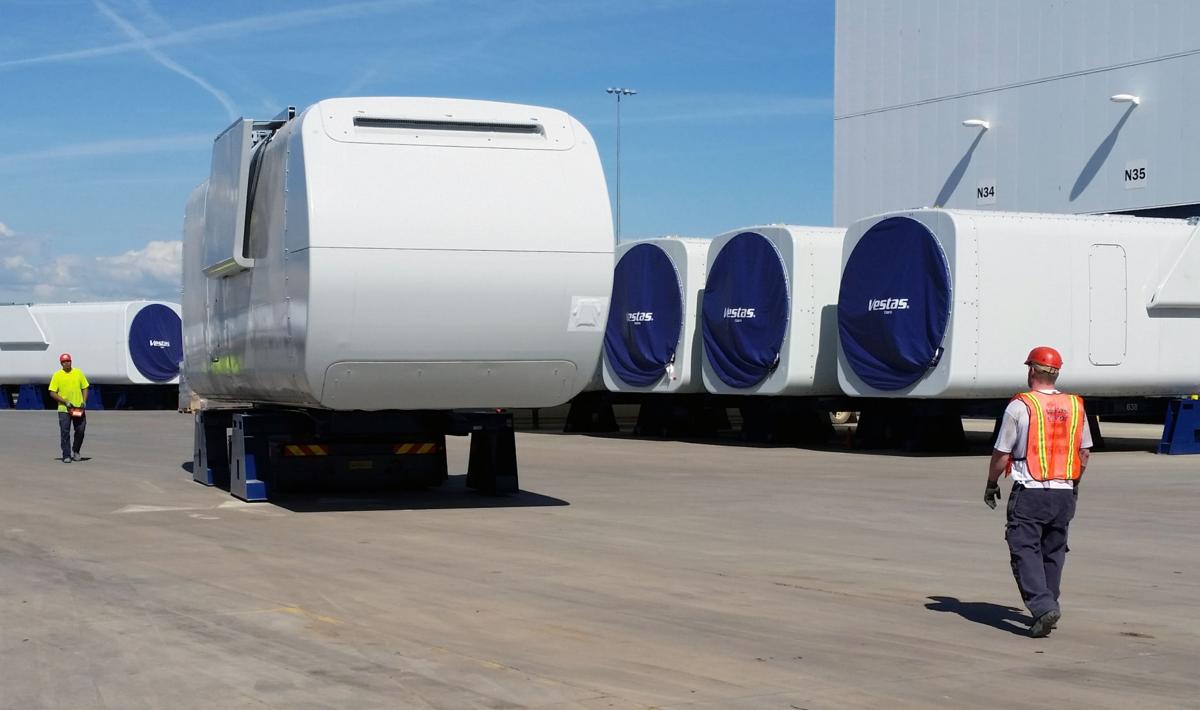 Workers move a wind turbine nacelle April 12, 2016, at a Vestas Wind Systems plant in Brighton. The company announced plans Wednesday to lay off 450 Colorado employees in Brighton and Pueblo.

A Vestas wind turbine spins April 2010 at a plant south of Pueblo. The company announced plans Wednesday to lay off 450 Colorado employees in Brighton and Pueblo.

Workers move a wind turbine nacelle April 12, 2016, at a Vestas Wind Systems plant in Brighton. The company announced plans Wednesday to lay off 450 Colorado employees in Brighton and Pueblo.

A Vestas wind turbine spins April 2010 at a plant south of Pueblo. The company announced plans Wednesday to lay off 450 Colorado employees in Brighton and Pueblo.

Danish wind turbine giant Vestas announced Wednesday it will lay off 450 workers from its plants in Brighton and Pueblo as part of a consolidation triggered by declining demand.

The company said in a news release that it plans to offer other jobs to 150 of the laid-off employees, which include 280 during the next two months at its Brighton wind turbine blades factory that will be consolidated with a similar facility in Windsor. Vestas laid off another 170 Wednesday at a nacelle factory, also in Brighton, and a tower factory in Pueblo. The Pueblo Chieftain reported that 120 job losses were at the Pueblo plant and 50 were at the Brighton plant, about 15% of the workforce at each facility.

Vestas also said it plans to move the North American headquarters for its global tooling unit to the former blades manufacturing plant in Brighton. That business had been spread over six other sites in the Denver area. The unit supports Vestas’ manufacturing, construction, transport and service operations by sourcing, stocking, repairing and distributing about 1 million specialized tools to Vestas operations throughout North, Central and South America. The unit has grown and needs the space that is available in the Brighton plant, which is expected to add 50 jobs in the near term, Chante Condit-Pottol, the company’s director of marketing and communications in North America, said in an email.

Vestas said it will help laid-off employees, if eligible, move to other roles in “growing parts of the organization,” including its service operations that support operations and maintenance of wind turbines. Those who don’t find new jobs with the company will receive severance packages, Condit-Pottol said in the email.

“The wind energy industry in (the) USA has grown tremendously in recent years, which has increased our factories’ capacity and expanded our service business,” Tommy Rahbek Nielsen, Vestas chief operating officer, said in the release. “With a larger fleet under service and lower demand in the near-term, we are therefore consolidating our setup in Colorado to ensure we can cater for our service business’ needs, and are structured in the right way to ramp up efficiently once wind turbine demand requires us to.”

Vesta laid off 185 employees in November from the Brighton plant when it discontinued one of the blade models produced at the facility. The latest layoffs leave the company with 4,500 U.S. employees out of 29,000 worldwide, including more than 2,000 in Windsor, the Fort Collins Coloradoan reported Wednesday.

Pueblo will be home to world’s No. 1 turbine plant

The company said the U.S. remains one of the world’s largest market for wind energy. Vestas told investors in a presentation last week that new orders in North America were down 37.6%, while deliveries were up 53.3% as wind farm owners rushed to get projects up and running before federal tax breaks were cut at year’s end. The company said it expects worldwide revenue to grow 15% this year.