While much of Colorado is still in extreme drought, June and July rains have lessened some of the shortfalls in southwestern Colorado. That's according to members of the state's Water Availability Task Force, who met Tuesday to look at monthly numbers on precipitation and reservoir levels.

But even with above-average precipitation in the last two months in all of Colorado's river basins, the state's average for this water year is still well below normal, according to Karl Wetlaufer, a hydrologist with the Natural Resources Conservation Service at the US Department of Agriculture. (A water year is from Oct. 1 to Sept. 30.)

The precipitation forecast for the next two weeks shows the summer monsoons are coming. While that's good news for farmers and ranchers, it's put water watchers on high alert for flash floods and more damage to the burn scars from last year's trio of record-setting wildfires, according to task force members.

Peter Goble, a climatologist with the Colorado Climate Center at Colorado State University, pointed out that while drought relief has come to southwestern Colorado, it's only gotten worse in the northwestern quadrant of the state.

"The West Slope has not recovered from a poor snow year," Goble told the task force. The last three to four years have been poor snow years, save for 2019, while recent monsoons have also been a disappointment, he explained.

Goble said the state will see wetter than normal conditions through the next two weeks. There's abundant moisture on its way to Colorado from the Gulf of Mexico and the Eastern Pacific, he said, which will produce somewhat cooler temperatures in addition to monsoonal moisture.

But that good news is tempered by lower-than-average precipitation forecasts for Western Colorado, August through October, which Goble called "discouraging."

Among the places where precipitation is above average: the San Luis Valley and Pueblo, both of which got good moisture May through July, Goble said.

Kevin Houck of CWCB said that it's been an interesting summer. "I don't know that we've ever had a summer where we've had more flash flood warnings" than this year, which he said have mostly but not always in burn scar areas. The next seven days will be interesting, he said, but after the precipitation predicted for the next couple of weeks it will dry out again. A year ago, they saw a similar prediction, and after Aug. 1 the rain stopped and the wildfires took off.

"It's not looking good," Houck said. Goble responded that typically the largest fires happen in June and July, in between the cool season and the monsoons. If northwest Colorado sees decent monsoons in the next two weeks, it won't reverse the hydrologic condition, but it can reduce the potential for wildfires.

Water levels at most of the state's 80 reservoirs are lower than average, and that's cause for concern, particularly given that the Bureau of Reclamation has announced it will draw down water from Blue Mesa, in Gunnison County, and Navajo, on the Colorado-New Mexico border. That release is intended to boost water levels at Lake Powell and its power generation. Wetlaufer said Lake Powell is at unprecedented low levels, lower than when it first filled up in the late 1960s. Blue Mesa alone will supply about 36,000 acre feet of water in the drawdown. An acre feet of water is 325,851 gallons, or enough to supply a family of four for one year.

Water levels at the state reservoirs are a key indicator of water demand.

It's part of a sad situation for the state's reservoirs, which are on average at 59% of capacity. Among the reservoirs struggling the most: John Martin in southeastern Colorado, which is at 39% of average capacity. Wetlaufer said there has been a precipitous drop in reservoir storage in the past water year. The only time it's been worse has been in Colorado's extreme drought years: 1996, 2002 and 2013.

The brightest spot in the state has been the South Platte. That's been nothing but good news for water providers in the northern Front Range, with reservoirs full or nearly so, and with above average precipitation for the water year, according to Wetlaufer.

Colorado Politics' Insider newsletter tells you all you need to know about the latest in Colorado's political arena. Subscribe through the newsletter button on our homepage.

A July 1 report from the NRCS shows reservoir levels in the Southwest, Gunnison and Arkansas basins considerably lower than a year ago. For example, Blue Mesa reservoir, which was at 83% of capacity a year ago, is now at 55% and will certainly drop lower when its waters are tapped to help Lake Powell. However, most of the major reservoirs (Pueblo, Lake Granby, Dillon and Stagecoach) are at or just slightly below where they were a year ago. 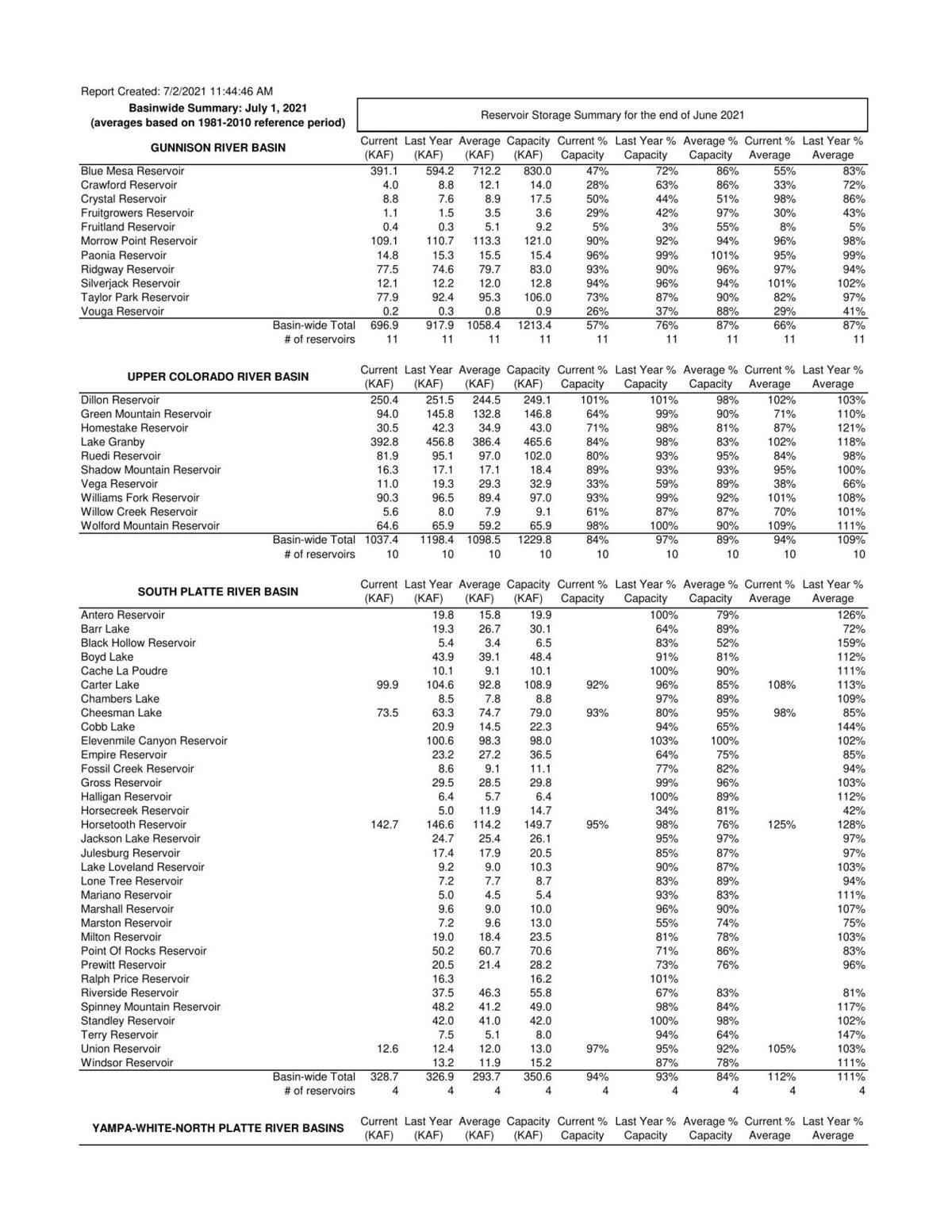 The federal Bureau of Reclamation took the unprecedented step Thursday of starting to release more water from already stressed reservoirs in the Colorado River Basin to support power production at Lake Powell.