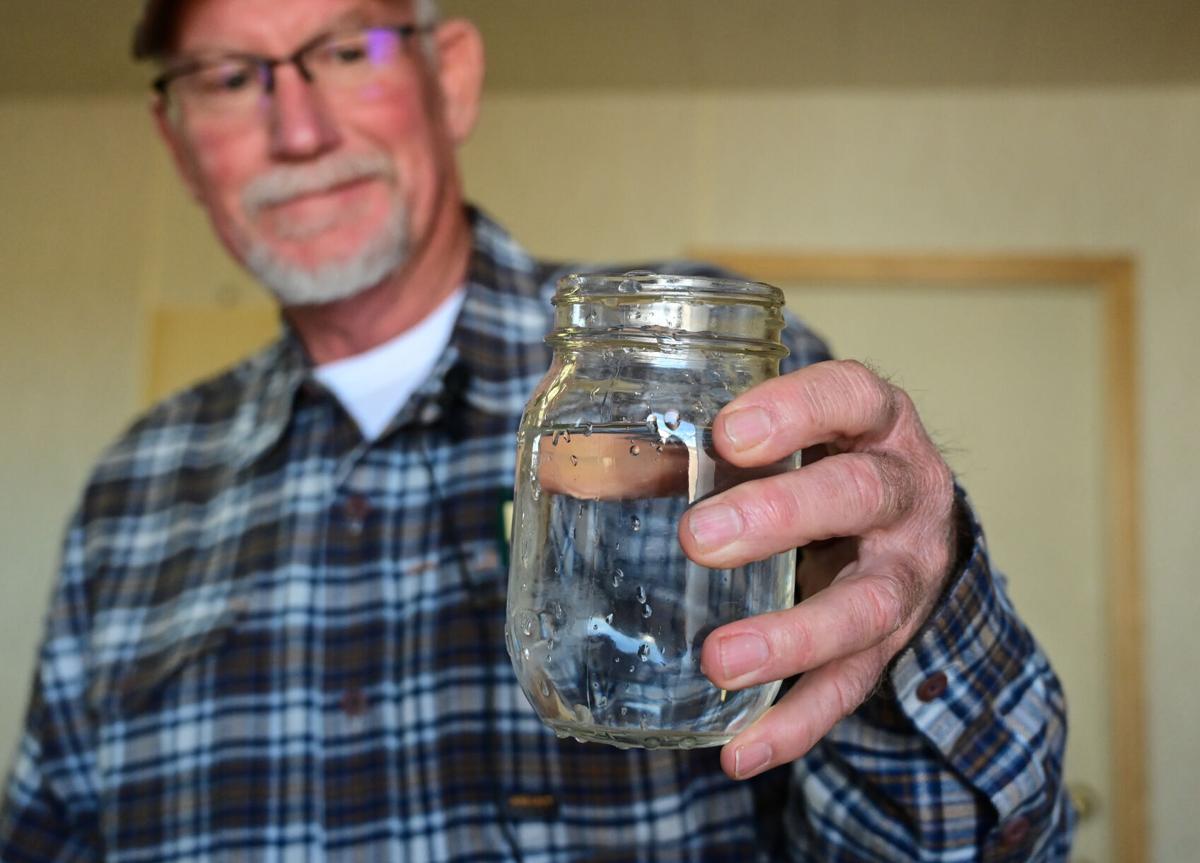 Norman Noe holds up an unassuming looking jar of water from the tap of the South Swink Water Company near La Junta. Recent

data shows some of the highest concentrations of radium in the nation are clustered in rural Southeast Colorado. 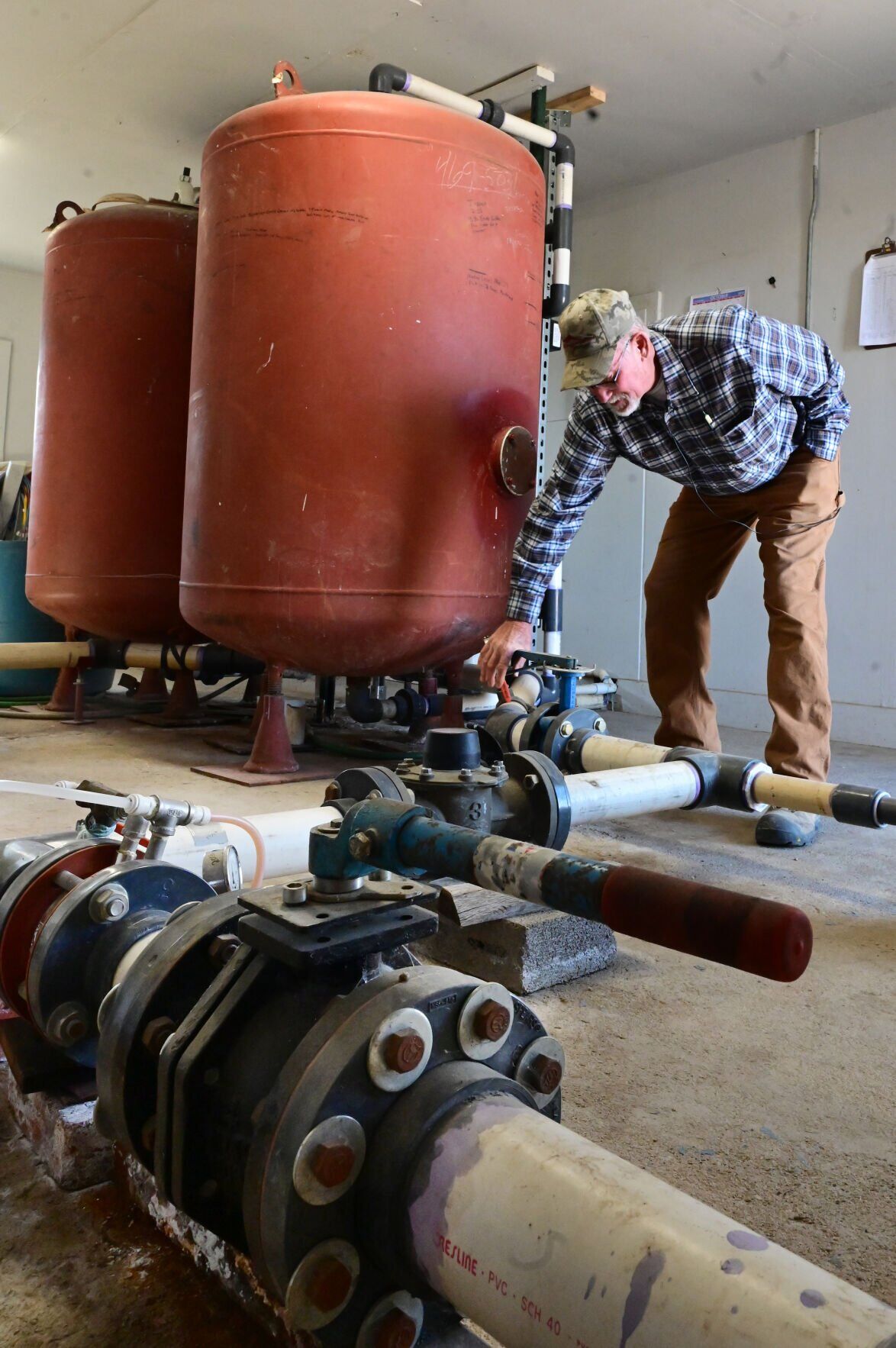 Norman Noe checks on the valves in front of giant iron filters that take iron out of the water for the South Swink Water Company. 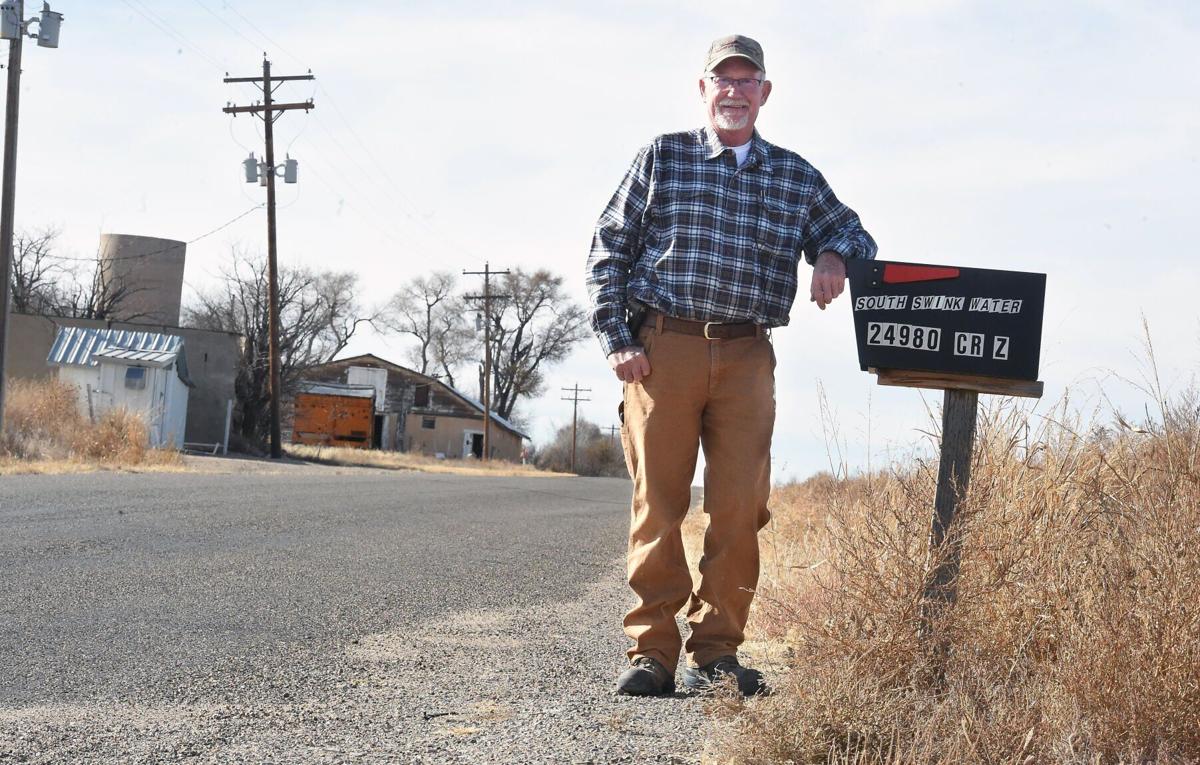 Norman Noe is the registered agent and sole employee of the South Swink Water Company. The small white building in the background is the chloronation building for the company. 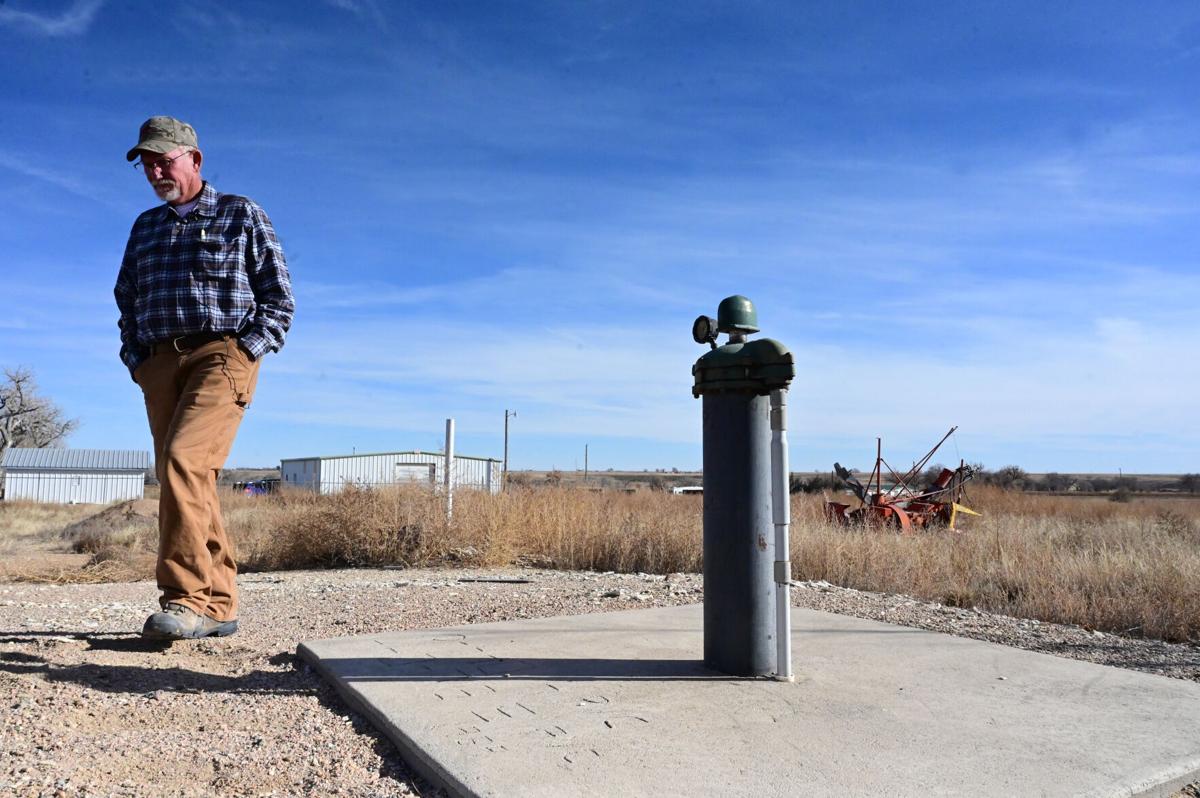 Norman Noe of the South Swink Water Company walks past one of the wells that goes into a deep aquifer and carries radium in the water. A recent compilation of drinking water contamination data shows some of the highest concentrations of radium in the nation are clustered in rural, southeast Colorado. There is no filtration for the radium. Noe is the sole employee that has 260 clients. 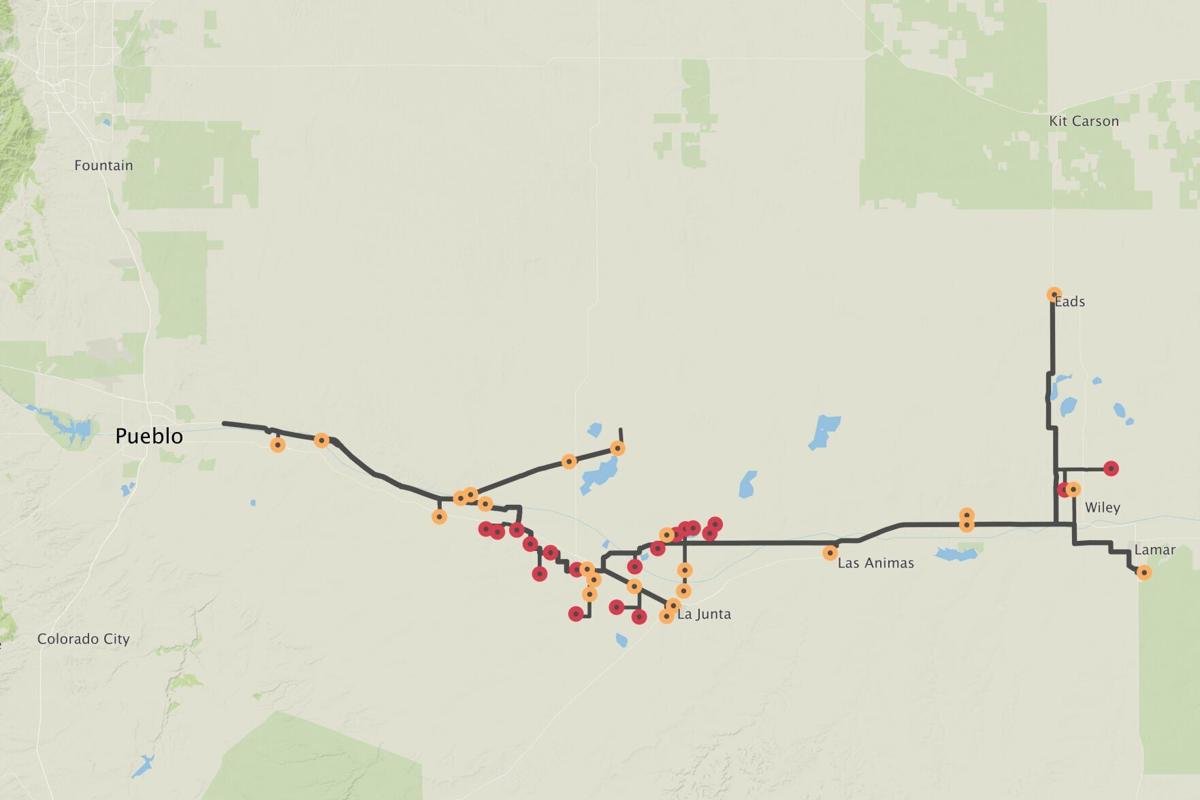 The planned Arkansas Valley Conduit will deliver clean water to areas where the drinking water has radium levels above federal limits (marked in red).

Norman Noe holds up an unassuming looking jar of water from the tap of the South Swink Water Company near La Junta. Recent

data shows some of the highest concentrations of radium in the nation are clustered in rural Southeast Colorado.

Norman Noe checks on the valves in front of giant iron filters that take iron out of the water for the South Swink Water Company.

Norman Noe is the registered agent and sole employee of the South Swink Water Company. The small white building in the background is the chloronation building for the company.

Norman Noe of the South Swink Water Company walks past one of the wells that goes into a deep aquifer and carries radium in the water. A recent compilation of drinking water contamination data shows some of the highest concentrations of radium in the nation are clustered in rural, southeast Colorado. There is no filtration for the radium. Noe is the sole employee that has 260 clients.

Some of the highest concentrations of radium-contaminated drinking water in the nation are clustered in rural southeast Colorado, according to a recent compilation of data.

The problem is hardly new. The presence of radium in the area’s groundwater, which is linked to an increased cancer risk particularly for children, has been known for decades. The newly compiled data shows that out of the 50,000 water systems included in the research, six of the ten worst radium levels in the nation are in Colorado.

The water providers are required to inform their customers of the contamination, and they say they’d like to fix the problem, but providing clean, radium-free tap water in the most remote areas comes with an untenable price tag.

A massive infrastructure project that promises to largely resolve the problem, the Arkansas Valley Conduit, broke ground this year, but its completion is years away and the bulk of its funding hasn’t materialized yet.

For now, most are hopeful that the conduit will be fully funded and fully built, but until then, the faucets in the area will still provide water with as much as four times the legal radium limit.

Exposure to radium, a naturally-occurring radioactive element that exists in the Earth’s crust as a byproduct of the radioactive decay of naturally occurring uranium and thorium, can cause cancer, kidney damage and birth defects.

Radium poses a unique risk to children, because it is treated by the human body like calcium and deposited into developing bones, where it remains radioactive and can kill and mutate cells.

Although the area's groundwater was known to have contaminants, high levels of radium in Colorado’s groundwater became a regulatory problem around 20 years ago, when the Environmental Protection Agency promulgated new radionuclide standards. Federal law allows up to 5 picocuries of radium-226 or radium-228, the most common versions of the element, per liter of water.

But Falco said it’s well-established that there will be about one excess cancer death per 10,000, at the maximum federal limit, and that the risks go up with concentration and accumulate over time.

“So if you have double the MCL (maximum contaminant limit), then it’s two per 10,000,” Falco said, “and that’s assuming that you drink two liters a day, a fair amount, every day, for 70 years.”

According to the Environmental Working Group’s new drinking water contamination data compilation, the worst radium content in the nation is found in Rocky Ford, where there was an average of 23 picocuries of radium per liter of water.

Eighteen other water systems in Colorado contain more than the legal limit. Most are clustered around the small rural towns of Rocky Ford, Swink and La Junta, about an hour’s drive east from Pueblo. The new data show one in every six Otero County resident has tap water above the federal limit.

After years of testing, studies and planning, the solution that‘s emerged is one proposed sixty years ago: The Arkansas Valley Conduit, the massive clean water delivery system proposal that stalled for decades over the project’s equally massive price tag.

Elsewhere in the state the Peak View Park mobile home park, situated on a wooded hillside along U.S. Route 24 in Woodland Park, registered more than twice the legal limit of radium for years, as the owners struggled to get the problem fixed.

Pete LaBarre, the owner, said he found out about the high radium levels about four years ago, when he also learned they were required to test their well water for contaminants. LaBarre described a challenging process to get the issue fully documented, have a remediation plan developed and approved and finally purchasing and installing the required equipment.

“It was a long, long drawn out process,” he said, that began with finding a licensed engineer to work with. “That took a year.”

The engineer oversaw more testing, then drafted plans for a radium extraction system, which required state review and approval. After their plans were approved, LaBarre said they had to purchase the equipment and schedule the installation, which requires additional oversight, and all of which was all delayed because of the global COVID-19 coronavirus pandemic.

All told, LaBarre estimated the system cost around $100,000. The cost, he said, will be absorbed into lot rental rates and should add a small amount of money for each resident.

“The process with the state is very cumbersome,” LaBarre said. “If they had just said to us, ‘Go and fix this and we don’t care how you get the radium out of the water,’ it probably would have taken us six months.”

Ron Falco, with the state health department, stressed the importance of having the systems installed with proper oversight, in order to ensure it’s installed and working correctly and that there won’t be problems in the future.

The new extraction system is now up and running, LaBarre said, and the initial tests show the water is now “well under the maximum 5 picocuries.”

But a key feature of the system Peak View Park installed is the access to Woodland Park’s sewer system. LaBarre said he had to make arrangements with the city’s wastewater treatment officials about the timing of their extraction system’s wastewater disposal, so that they can send the radium-saturated byproduct of the extraction process into the sewer when the system can adequately handle it.

The lack of a sewer system is what cripples any similar efforts in the more rural areas around La Junta. There, where many of the residents use septic tanks, storing an extraction byproduct would be prohibitively expensive.

“Exorbitant. Astronomical,” said Norman Noe, the owner of the South Swink Water Company. “For a rural company, such as us, to treat the water and then hold the high-concentration wastewater — it isn’t feasible.”

Noe said the radium levels have tested high since the 1980s, but when the EPA put the 5 picocuries per liter limit into effect in 2000, his water system was considered out of compliance.

After unsuccessfully arguing in court that the limit was too stringent and should be raised to 15 picocuries per liter, Noe said he and others in the area began having engineers drafting plans to fix the issue. At first, he said, they considered a reverse osmosis system that removes 90% or more radium, but the state health department rejected that plan because there wasn’t an adequate plan for the wastewater produced by the process.

“So in 2003, we started pushing for the conduit,” Noe said of the long-planned Arkansas Valley Conduit.

The idea to provide clean drinking water to the Arkansas Valley dates back to the 1960s, and an often referenced visit by then President John F. Kennedy, who signed the Fryingpan-Arkansas Project Act in Pueblo in August of 1962. The act laid out a plan for the Arkansas Valley Conduit that never materialized, because local funding was never enough to cover the costs.

In recent years, as attention came back to the conduit plans, the new construction costs have been estimated to exceed $500 million.

May Valley Water Association is the largest water utility in the region with radium above the federal limit, with an average measurement about 2 ½ times the maximum EPA level over the past several years.

“New customers receive a packet all about the system and the water quality," said Rick Jones, the utility’s superintendent, “so they know that it’s in the water.”

Jones said the utility surveyed their customers a few years ago about the water and the contaminants.

“Many of our customers have some kind of water treatment, either a water softener or reverse osmosis at their faucets and sinks,” he said. “We don’t make any claims for those products, but they do reduce the radionuclides by a significant amount.”

But Jones, like others, said his long-term hope is with the Arkansas Valley Conduit.

“It’s been engineered and re-engineered — 50 years in the making,” he said. “It all comes down to dollars.”

The project has seen some promising milestones, notably an infusion of money that promises to get ground broken on the first phase of the conduit, starting next year.

Bill Long, the president of the Southeastern Colorado Water Conservancy District, said the towns along the first 12 miles of the conduit, Boone and Avondale, should be getting clean water from the conduit by 2024.

More funding will be needed to finish the project, and Long said he believes there will be money allocated from the recently passed federal infrastructure bill, and that the funds could help get the conduit finished, but that the details aren’t yet clear.

“We think we can reach the La Junta area in five to six years,” he said, “but the new infrastructure could accelerate that.”