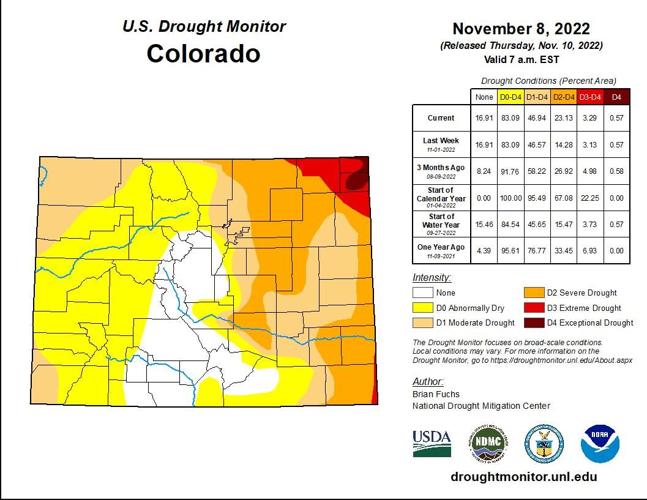 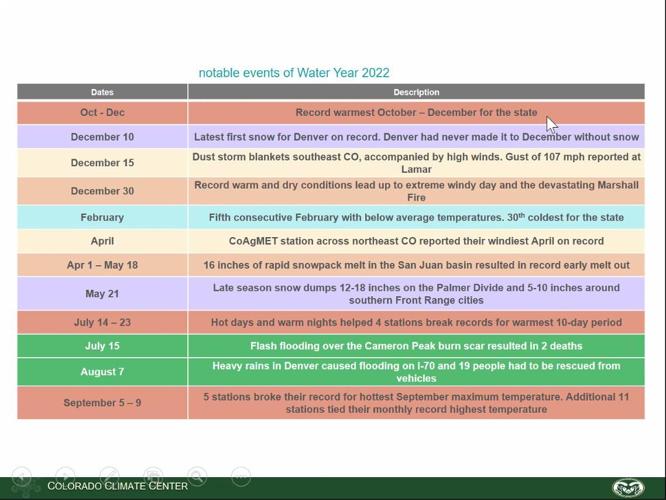 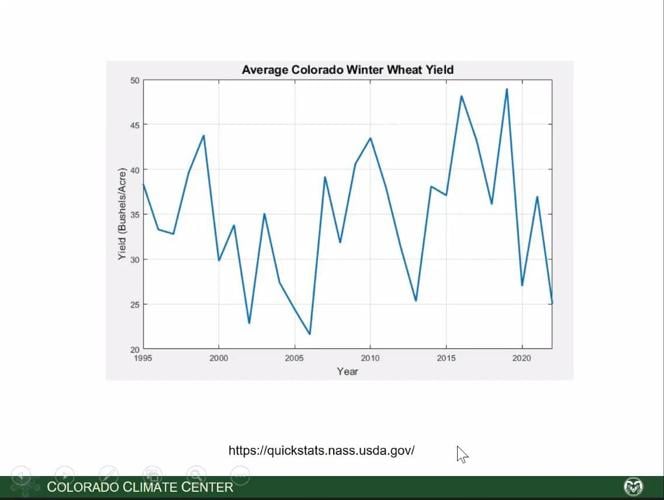 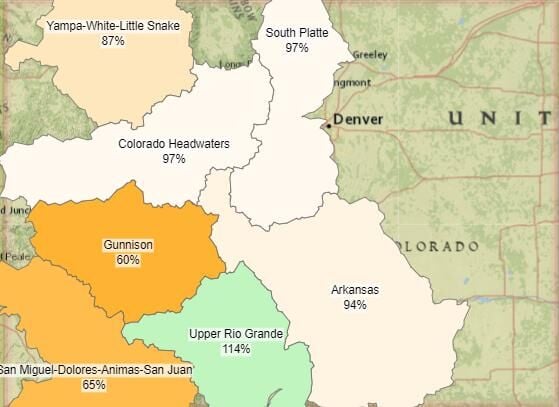 While a third year of warmer and drier conditions through the winter is likely, there's a sliver of hope that cooler and wetter conditions could develop by summer 2023.

That's the best news possible for Colorado's water watchers at Tuesday's meeting of the Water Availability Task Force, a coalition of state and federal water officials and Colorado water providers.

The group first looked at the water year to date. A water year begins on Oct. 1, so Colorado is now into the second month of the current year.

"Some areas of the state are not looking so bad," said Peter Goble, a climatologist with the Colorado State University Climate Center.

While it's been much drier than normal for northeastern Colorado, which has been in the worst drought conditions for months, the strong summer monsoons made conditions west of the Continental Divide better than average.

The water year that ended on Sept. 30 was the 35th driest on record, dating back to 1900. The average temperature over the last water year was the third warmest out of the last ten years, Goble said.

These are typical conditions found in a La Niña weather pattern year, meaning cooler and wetter conditions in the north and warmer and drier in the southern half of the nation.

But the outlook for 2023 has a glimmer of hope.

The La Niña pattern looks to die off in the spring, transitioning into a more neutral weather pattern with an El Niño pattern forecast calling for cooler and wetter conditions later in the year.

Goble estimated the early snowpack — falling primarily in lower mountain elevations of around 10,000 feet — combined with a projection that La Niña could "fizzle" by the end of the winter means Colorado could see the best of both worlds.

While long-term drought remains across much of the state, these are the best pre-snow season hydrological conditions western Colorado has seen in years, Goble said.

Goble also looked at the records set in 2022.

Most notable was the Dec. 15, 2021 dust storm that hit southeastern Colorado. Goble said it devastated the state's winter wheat crop, resulting in one of the worst years for average crop yields since 2006.

On the Western Slope, conditions are considerably better, with more recent precipitation that improves their drought conditions.

One of the bright spots is the situation for soil moisture west of the Continental Divide.

"These are some of the best soil moisture conditions we've seen in years," Goble said.

That's an important factor that impacts the speed of snow runoff in the spring. The more moisture in the soil before the snowpack begins to melt, the longer it takes that snowpack to melt. That early water year moisture should make runoff a little better, Goble said.

The July monsoons were a "saving grace" for Colorado, said Joel Atwood of the Natural Resources Conservation Service, part of the U.S. Department of Agriculture. That rainfall improved streamflow in much of the state, and it's allowing Colorado to start its next water year with decent soil conditions.

The NRCS also provides updates on reservoir storage, and according to Atwood, reservoir storage statewide is about 77% of normal. The low point is in the Gunnison River Basin, where Blue Mesa Reservoir, the state's largest, is at 44% of its capacity. The reservoir was tapped late last year to help water levels at Lake Powell.

Navajo Reservoir, in the San Miguel/Dolores/Animas and San Juan River basin in southwestern Colorado, also sent water down the Colorado to Lake Powell. It's currently at 63% of its capacity.