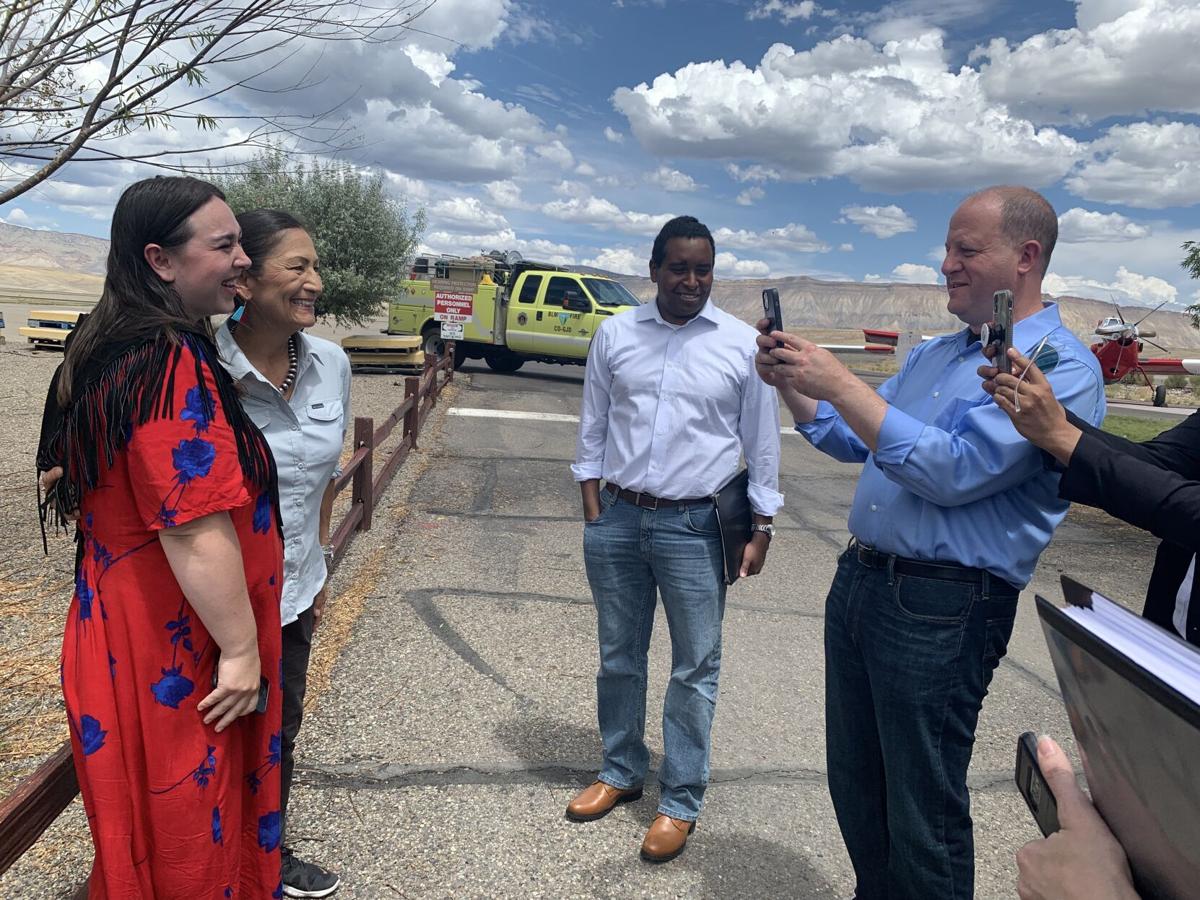 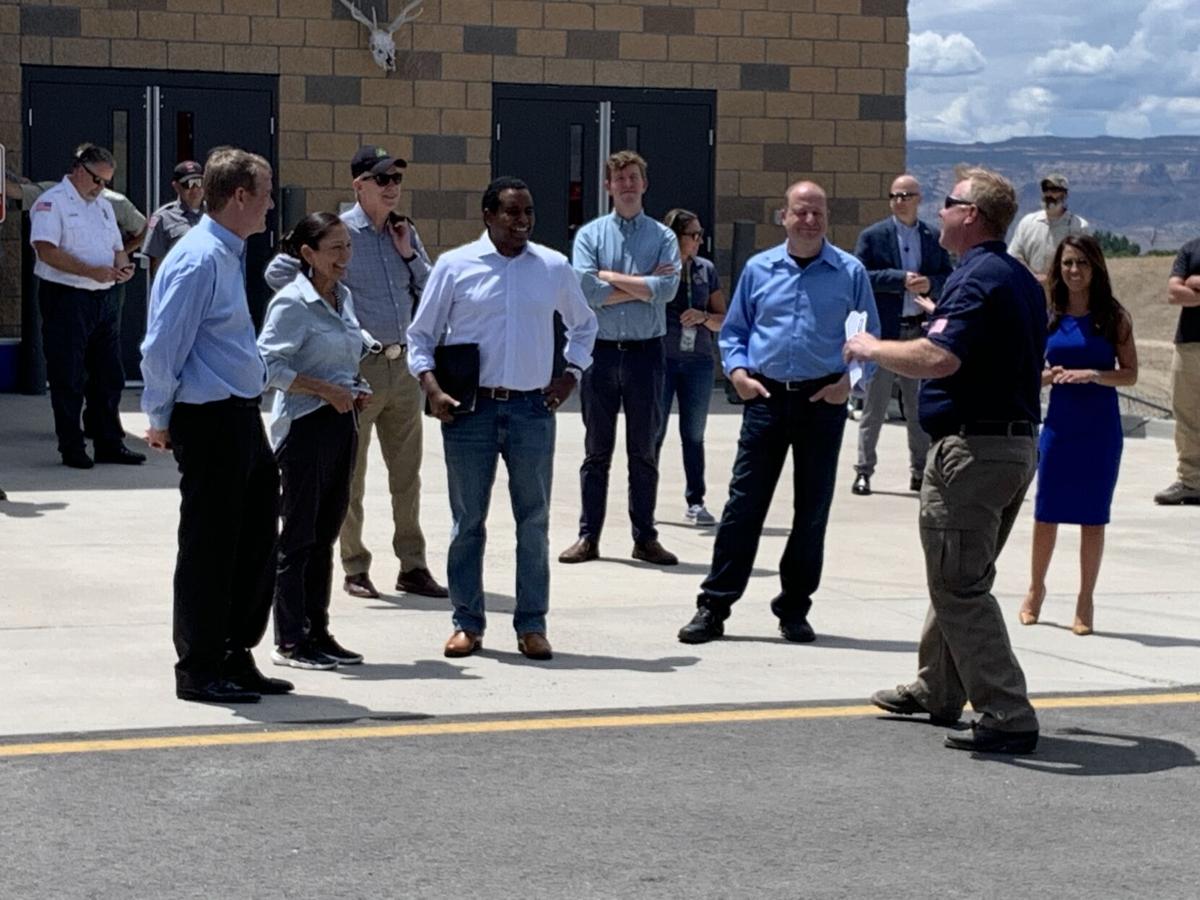 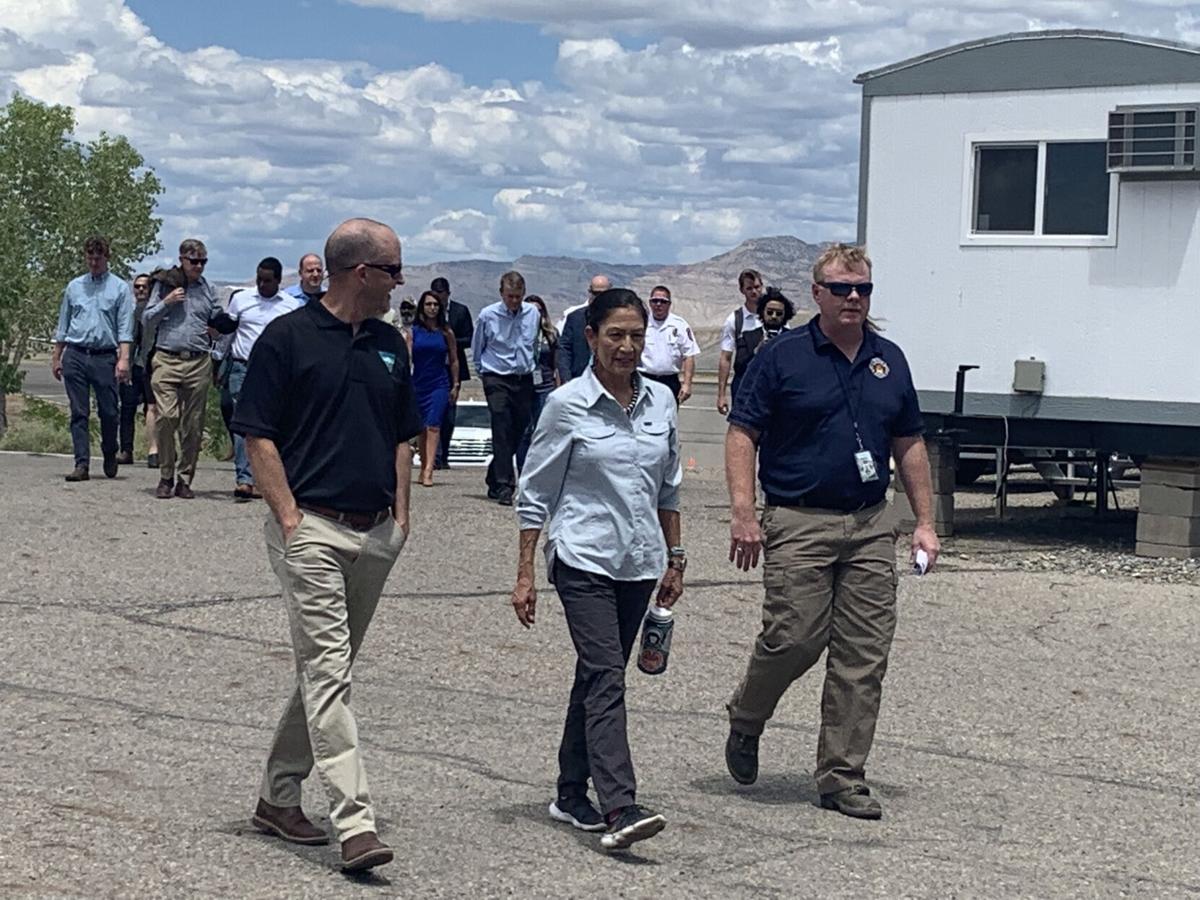 On her second day in Colorado, Secretary of Interior Deb Haaland met with the Grand Junction community to talk about the future of the Bureau of Land Management headquarters.

While Friday's visit to Mesa County and various BLM facilities — including its dispatch and air tanker base at the Upper Colorado River Interagency Fire Management Unit — was supposed to be about fire response and mitigation, Colorado's delegation was singularly focused on persuading Haaland to keep the BLM headquarters in Grand Junction.

Haaland, in her first year as Interior Secretary, was first invited to Colorado by Sen. John Hickenlooper back in January, during her confirmation hearing with the Senate Energy and Natural Resources Committee.

The Biden administration is reconsidering the decision. Even those who support keeping the headquarters out West, including Sen. Michael Bennet, D-Colo., noted Friday that the way the move had been handled had been "counterproductive," both for the agency and for the American people.

Haaland noted that many BLM employees faced significant upheaval in the move. They lost friends and colleagues of many years, even if they hadn't been required to move. Current employees are struggling to implement the bureau's mission, given large numbers of vacancies in the Grand Junction headquarters. Out of 328 positions prior to the move, 287 employees chose to retire or go work somewhere else, and only three actually came to Grand Junction.

Government Executive magazine reported last month that even some of those who accepted relocation to Grand Junction are now looking for jobs in Washington, D.C.

The agency has more than 80 vacancies in the Grand Junction office and many cannot be filled until "we chart a balanced course forward," Haaland said.

The move was enormously challenging and there's no way to "sugar coat" the trauma and disruption that continues to affect the team at Interior, she said. "My first priority is to avoid doing any more harm to the BLM's dedicated employees. We owe them that."

Haaland said that she remains open to the idea that Grand Junction would play a significant role in the BLM's future. "It was an eye-opening experience" that reinforced her conviction to put the BLM employees first and do what is right for them. They don't need more uncertainty from future administrations, but "we owe it to the people of Grand Junction," too, she said.

Haaland said that having BLM leadership connected to the people and communities of the West is a good thing, which helps the BLM be be mindful of the impact of decisions on those who depend on public lands for their livelihoods.

But what the future of the BLM will look like is an open question, Haaland said, but that she anticipates making a decision soon.

As to the vacancies at the BLM office, U.S. Rep. Lauren Boebert, R-Silt, said that she's been to the Interior Department in Washington, and it's like a ghost town.

"We have to have that representation here. It's why we should enlarge reservoirs, which has been denied for decades" and unmanaged forests. The pandemic interrupted a lot of things, she said, and a lot of federal employees are still not working.

"It's not just here in Grand Junction," Boebert said. "I've been in the camp of encouraging people to get back to work ... .  I see it as a failure of your job to sit at home when you can be in your office."

Gov. Jared Polis was part of the Colorado delegation along for Haaland's visit in Grand Junction on Friday.

"We had a very productive meeting this morning with many leaders of the Grand Junction community to talk about the value Grand Junction brings to the BLM," Polis said. "It's not about what BLM does for us, it's what we as Westerners can do for the BLM, to improve employee morale and retention, responsiveness to issues on the ground and to make sure those who manage our public lands are in and around our public lands."

Polis said those who work on public lands have an affinity for them, and there's no better place than Grand Junction for that.

Bennet, also at the Grand Junction event, said Grand Junction and Mesa County are thriving with an important perspective to offer federal agencies. "It's a huge benefit to the American people if their government is closer to them," he said.

Bennet also said Haaland's visit comes at a time when the West is facing a fire epidemic.

"It's not fire season, it's a fire year," he said. It's not just dry conditions and climate change, it's also neglect by the federal government, Bennet said, which he called a lack of investment. "We're working extremely hard for our colleagues to understand the dangers we're facing ... we have a good chance" in the conversations around the infrastructure bill to make some of those investments on forest restoration and watershed protection, vital to farmers, ranchers and communities.

"This is a delegation-wide effort to support the BLM's presence" in Grand Junction, Bennet noted, even from members who weren't there Friday.

Hickenlooper called Haaland a remarkable person and that he looks forward to seeing how she transforms both the Interior Department as well as how the government thinks about public lands. The Air Center is a key to fighting forest fires, and will become a symbol of the investment that has to be made.

There are a myriad of reasons to keep the BLM in western Colorado, added U.S. Rep. Joe Neguse, D-Lafayette, who is also chair of the House subcommittee on public lands, national parks and forests, where he succeeded Haaland from the 116th Congress. He noted his district saw the state's two largest fires last year, and thanked those on the front lines, including from the BLM, who fought those fires.

He also thanked the delegation for its work on the infrastructure legislation, which he said would ensure they are taking the necessary steps for mitigation and reforestation. Haaland and Biden also are calling for a Climate Conservation Corps that would work on public lands.

"To make matters more difficult, the persistent drought is straining water supplies, affecting farmers, ranchers, fish and wildlife, and tribal and non-tribal communities. With so little room for error we must remain steadfast in our commitment to wildland fire preparedness mitigation and resilience ... we owe it to the brave men and women [on the front lines] to ensure we are giving them all the tools and training they need" to protect the lands from fires.

The Center is getting a $6.1 million investment to repair the complex and improve the tanker base. It's part of a $2.8 billion allocation to the Interior Department from the 2020 Great American Outdoors Act, which won bipartisan support from Congress (and was initially sponsored by then-Sen. Cory Gardner, R-Colo.). This investment will eliminate safety hazards by replacing multiple structurally deficient buildings with one building that will reduce operation costs, she said.

Welcome to DC Doings, a weekly look at the Colorado congressional delegation's activity.