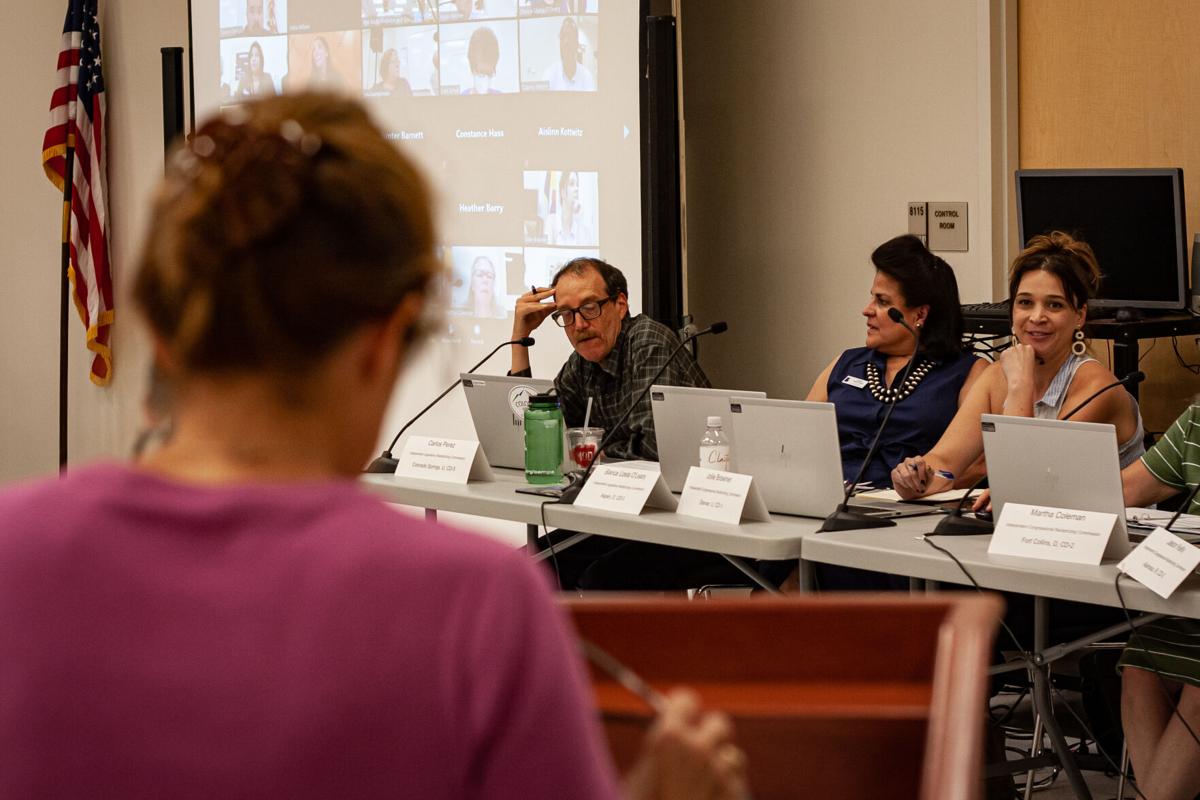 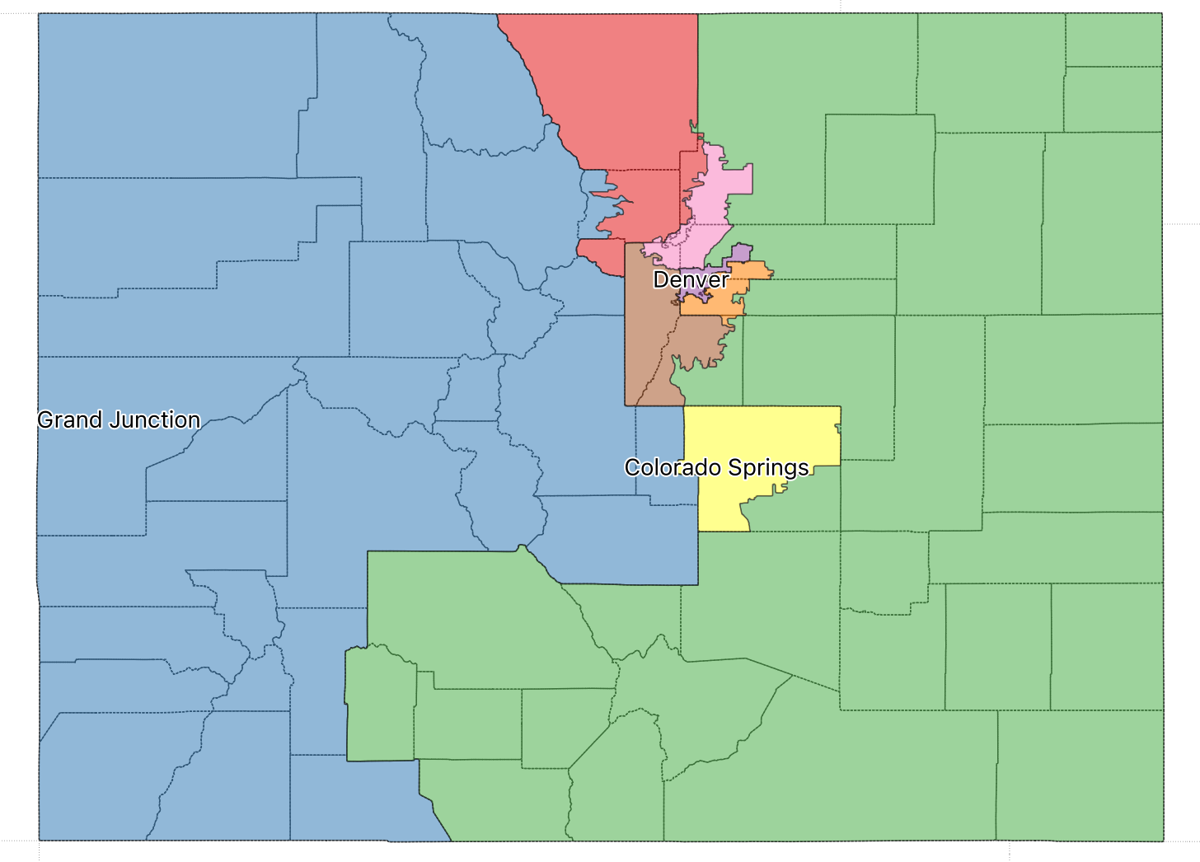 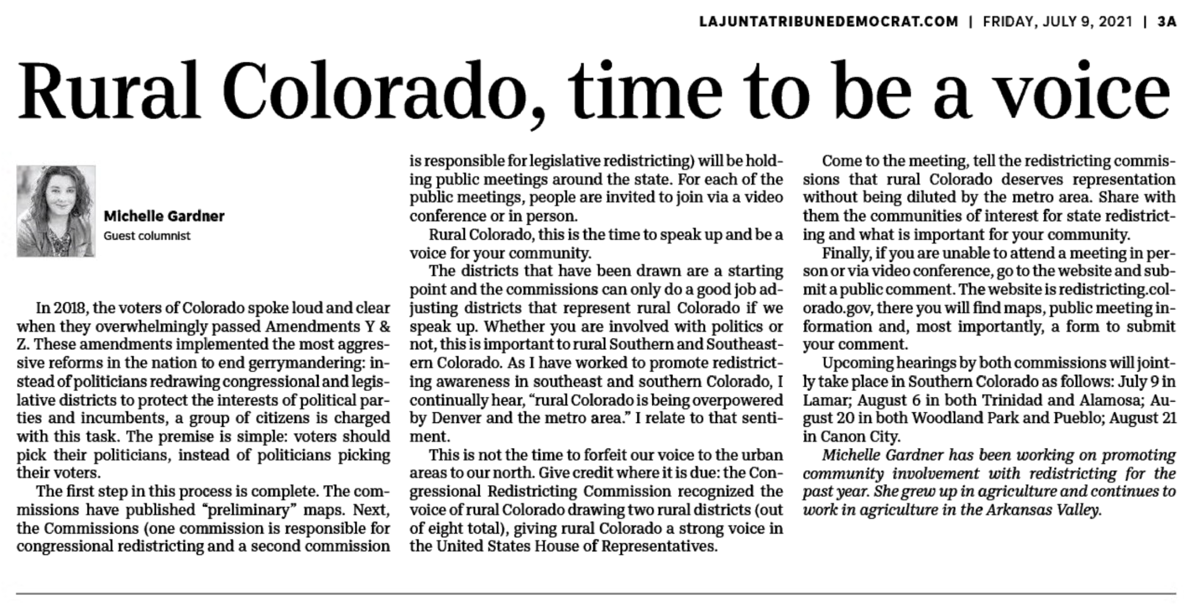 Colorado’s independent redistricting commissioners are in the middle of a statewide tour, listening as members of the public give their opinions on what they want the next decade’s congressional and legislative maps to look like.

But that isn’t entirely what’s been going on.

In at least one example at the commissions’ public input hearing Tuesday in Arvada, a woman who painted herself as an everyday Jane Q. Public and implied no political connection gave specific map suggestions to the commissions after being coached by a paid political consultant. After The Gazette began asking questions about the episode, it has been reported as part of a paid lobbying effort.

And while that’s not against the law, the constitutional amendments passed by voters that created the independent redistricting commissions came with requirements that paid efforts to sway the commission must be publicly reported, using the state’s lobbying disclosure mechanisms.

“I’m here representing myself,” the woman began, before offering specific recommendations to the commission about the congressional map, mostly read from notes on a phone. But when asked for more details about her suggestions by the commissioners, the woman turned around, looking for answers she didn’t have from Tasia Poinsatte, a research director for RBI Strategies, led by the high-profile principals Rick Ridder and Joannie Braden. Poinsatte shouted out answers for the woman to provide in response to the commission’s questions.

Ridder said after The Gazette contacted him about his consulting firm coaching a public speaker at the Arvada commission hearing without disclosing the connection, and after reviewing the lobbying disclosure rules, he decided to report the activity as paid redistricting lobbying.

“She (Tasia) was at the hearing at the behest of RBI Strategies, our firm, and she was talking with one of her friends,” Ridder said. “Under the ludicrous rules of amendments of Y and Z, it could be seen as lobbying.”

RBI Strategies is listed as the client in the lobbying report filed Thursday. The activity wasn’t paid for by any client, Ridder said, and of the $3,400 monthly retainer paid to RBI Strategies by DeGette’s campaign: “95% of that goes to pay for filing those FEC reports.”

Ridder said the rules are too complicated to be easily understood.

Amendments Y and Z included language describing what constitutes lobbying in the realm of redistricting: “Contract or receive compensation for advocating to the commission, to one or more commissioners, or to nonpartisan staff for the adoption or rejection of any map, amendment to a map, mapping approach, or manner of compliance with any of the mapping criteria.”

The lobbying disclosure rules fit into one of the overarching promises of the independent commission system: Increased transparency in the redistricting process.

The amendments go on to empower the Secretary of State to make the detailed rules for how to interpret and apply the law.

Curtis Hubbard, a local Democratic political consultant, said that when he read the Secretary of State’s rules, he decided to register himself as the redistricting lobbyist for a 501(c)4 nonprofit organization called Fair Lines Colorado.

“Even in a communications role,” Hubbard said, “it was clear to me that it would be best to register my activity.”

The group has reported $10,000 in expenditures so far.

While RBI Strategies has now disclosed their effort to sway the redistricting commission, paid efforts to affect the commissions’ maps aren’t limited to Democrats. Republican consultant and strategist Alan Philp has registered as a paid redistricting lobbyist, working for a 501(c)4 organization called Colorado Neighborhood Coalition, and the group has reported spending $2,000 so far.

Even though the spending is reported, 501(c)4 nonprofit organizations are not required to disclose their donors, and when they spend in elections, they’re called “dark money” groups.

But while Philp has reported his paid efforts as formal lobbying, two others paid by the same nonprofit have not.

Michelle Gardner, a Republican activist and Otero County Commissioner candidate in 2018, said she’s being paid by Colorado Neighborhood Coalition to do community outreach. She has met with and presented to the Trinidad City Council and the Rotary Club of Cañon City, and she wrote letters to the editor that appeared in the La Junta Tribune-Democrat. In September 2020 she urged rural Coloradans to apply to the commission, and this month wrote a letter advocating districts that keep rural and urban areas apart.

“This is not the time to forfeit our voice to the urban areas to our north,” Gardner wrote. “Come to the meeting, tell the redistricting commissions that rural Colorado deserves representation without being diluted by the metro area. Share with them the communities of interest for state redistricting and what is important for your community.”

Neither of the letters identified Gardner as being paid by Colorado Neighborhood Coalition, and Gardner said she doesn’t think her paid work qualifies as lobbying that needs to be publicly reported.

“I am being paid by Colorado Neighborhood Coalition, but I’m not lobbying,” Brophy said of his work for the organization. “I don’t have any communications with the commissioners about the maps they’re drawing. I don’t do that.”

Brophy has appeared on local media, such as a Colorado agriculture news talk show called The Barn, to talk about redistricting. In a September 2020 appearance on the show, Brophy advocated for some of the same ideas as Gardner.

“We’re going to need a congressional district, we hope, for eastern Colorado, that doesn't force us into a district that’s dominated by urban counties,” Brophy said.

In March, Brophy appeared on a YouTube talk show run by Action 22, an association of rural counties in southern Colorado, where he promoted “two almost exclusively rural districts,” and said he saw Action 22 as a clearinghouse for promoting those ideas.

Action 22, along with two other rural county associations, submitted a map with two rural districts, like Brophy and Gardner had promoted, and the submission was integrated into the preliminary draft congressional maps now being toured around the state, the commissions’ staff has said.

“I’m encouraging people to participate. I’m calling it grassroots organizing,” Brophy said. “Maybe this will get me a visit with my friends on the ethics committee. Who knows.”

McNulty, the registered agent for the coalition, said the group registered a lobbyist, Philp, who he said will directly communicate with the commissioners, but that others paid by the group are doing community outreach, education and awareness.

Correction: This article has been changed to accurately identify former Rep. Frank McNulty's final leadership position in the Colorado Assembly.

Redistricting is coming to a Colorado city near you. Find times and locations here.

Colorado’s redistricting commissions will be touring the state in July and August, looking for your input on the congressional and legislative maps they’re redrawing.