Denver-based Dominion Voting Systems made good Monday on its indication it would sue a prominent ally of former President Trump, My Pillow founder and pitchman Mike Lindell.

Lindell, like Trump lawyers Rudy Giuliani and Sidney Powell earlier, stands to lose $1.3 billion in the defamation lawsuit for his aggressive promotion of a theory that the election was stolen because Dominion voting equipment flipped votes to Democratic nominee Joe Biden.

Dominion is used across the country, including in 62 of Colorado's 64 counties. 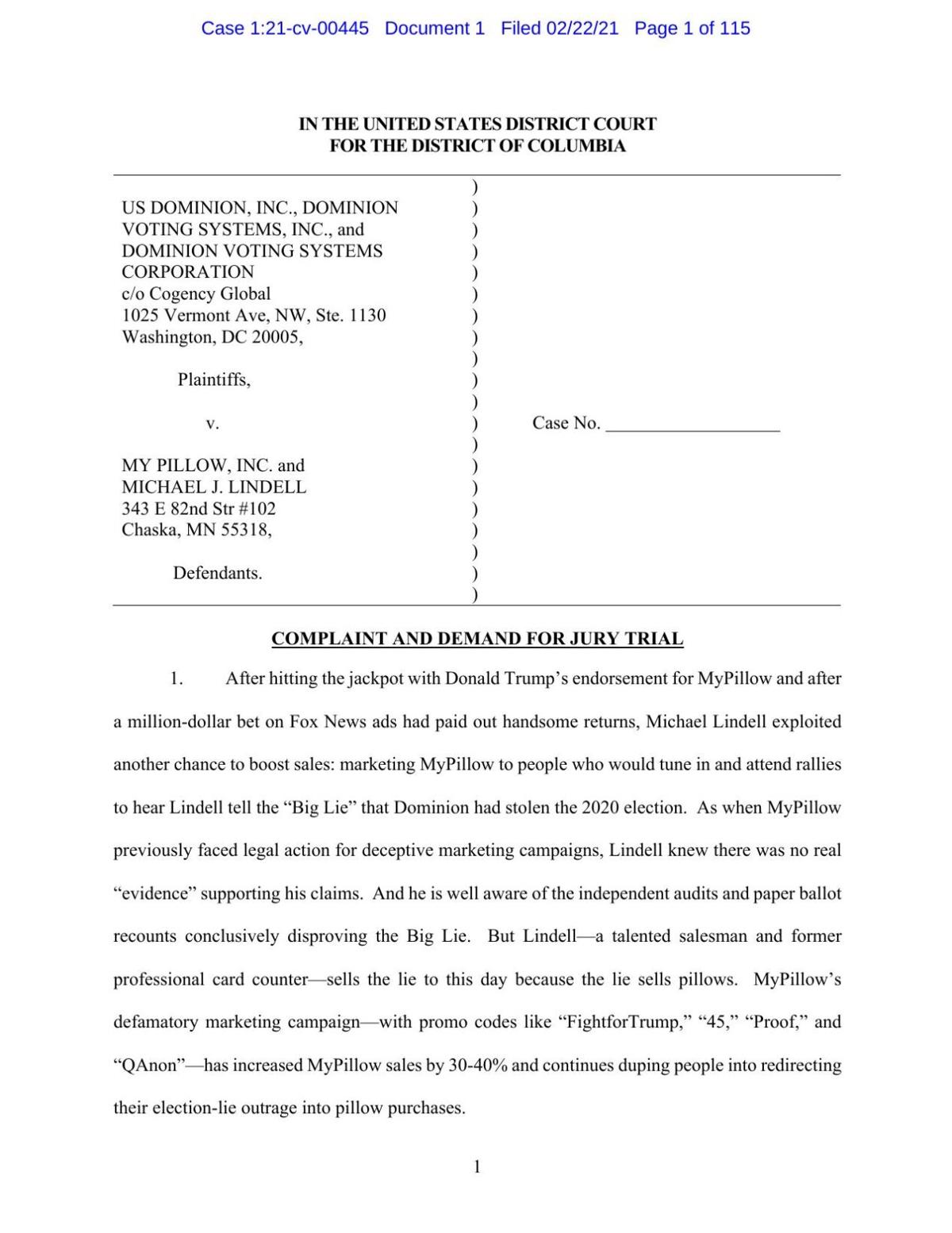 Twitter has permanently banned Trump and Lindell for making the false claims, which were the basis of the Jan. 6 insurrection at the U.S. Capitol that left at least five people dead. (Two Capitol police officers committed suicide in the days following the riot.)

This month Lindell bought three hours of airtime to promote the claim on One America News Network this month. News networks that once touted the "stolen election" story have backed off and aired disclaimers to distance themselves, as litigation began in December.

Dominion filed its claim in U.S. District Court in Washington, D.C., on Monday. The company has signaled others would face lawsuits to prove their conspiracy and vote-flipping allegations.

"After hitting the jackpot with Donald Trump’s endorsement for MyPillow and after a million-dollar bet on Fox News ads had paid out handsome returns, Michael Lindell exploited another chance to boost sales: marketing MyPillow to people who would tune in and attend rallies to hear Lindell tell the 'Big Lie' that Dominion had stolen the 2020 election," the lawsuit states. "As when MyPillow previously faced legal action for deceptive marketing campaigns, Lindell knew there was no real 'evidence' supporting his claims. And he is well aware of the independent audits and paper ballot recounts conclusively disproving the Big Lie.

Dominion said in a court filing that it had incurred unnecessary expenses and taken extraordinary measures to reach Powell, even hiring private investigators and following Powell across state lines.

"But Lindell—a talented salesman and former professional card counter — sells the lie to this day because the lie sells pillows."

Dominion CEO John Poulos said Monday that that the company gave Lindell ample warning, yet he used those warnings to amp up his claims and promised to come forward with proof, but he has not done so.

"These claims have caused irreparable harm to Dominion’s good reputation and threatened the safety of our employees and customers," Poulos said in the statement. "Moreover, Mr. Lindell's lies have undermined trust in American democracy and tarnished the hard work of local election officials.

Dominion sues Rudy Giuliani for $1.3B over 'viral disinformation campaign'

"No amount of money can repair the damage that's been done by these lies, which are easily disproved. Hundreds of documented audits and recounts have proven that Dominion machines accurately counted votes. We look forward to proving these facts in a court of law."

The lawsuits so far are at the center of a sprawling amount of coming litigation over claims by Dominion and another election software company, Smartmatic, of conspiring with foreign interests to throw the election.

Smartmatic announced it would sue the Fox News networks and three of its prominent hosts who promoted the claims for more than $2.7 billion. The three Fox News — Maria Bartiromo, Lou Dobbs and Jeanine Pirro —asked the court to dismiss the lawsuit, countering the media has First Amendment protections.

Separately, in December Eric Coomer, Dominion's security director, filed a lawsuit in U.S. District Court in Denver against local and national conservative figures who have singled him out as a chief conspirator. The claims have forced him and his family into hiding, he said.

Oltmann told Colorado Politics in December he failed to tape the calls he was surreptitiously monitoring for the liberal activist organization's activities.

The CEO aggressively pressed the case that the November election was stolen from President Donald Trump. Last month Dominion, a major election equipment and software maker, filed a $1.3 billion defamation suit against Lindell over his allegations that the company is at the center of a sprawling international conspiracy to switch votes and steal the election.

Trump campaign attorney Sidney Powell alleges that her claims about the election software company at the center of an international conspiracy to switch votes from President Trump to Joe Biden are protected as political speech. Dominion qualifies as a public figure, she asserts.

The countersuit eclipses the $1.3 billion lawsuit Dominion filed in February against Lindell regarding the conspiracy theory that the company switched votes from Donald Trump to Joe Biden in last November's election.

If you have a half hour and a suspicious mind about stolen elections, you can check out a video flagged to reporters by Secretary of State Jen…

The arguments made in a federal court in Denver Tuesday afternoon could offer a forecast of litigation to come over whether the November election was stolen and who bears responsibility if it was, or if the allegations are merely conspiracy theories and defamation.

A U.S. magistrate in Denver dismissed a class-action lawsuit that originated in Colorado against Dominion Voting Systems, Facebook and others accused of conspiring to cost Donald Trump last November's election.

Newsmax apologizes to Dominion executive who sued over 2020 election allegations

Newsmax apologized to an executive at Dominion Voting Systems, one of the companies at the center of former President Donald Trump's election fraud claims, for airing allegations that he was involved in the manipulation of voting machines used during the 2020 election.

A wide majority of Colorado voters want the government to bring down the hammer on powerful social media companies, according to a new survey, though the reasons given vary greatly depending on the voters' partisan affiliation.