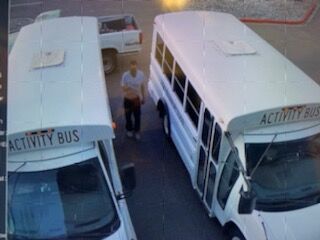 Two suspects stole catalytic converters out of these Atlas Prep activity buses in May in front of the high school near Fountain and South Academy boulevards. 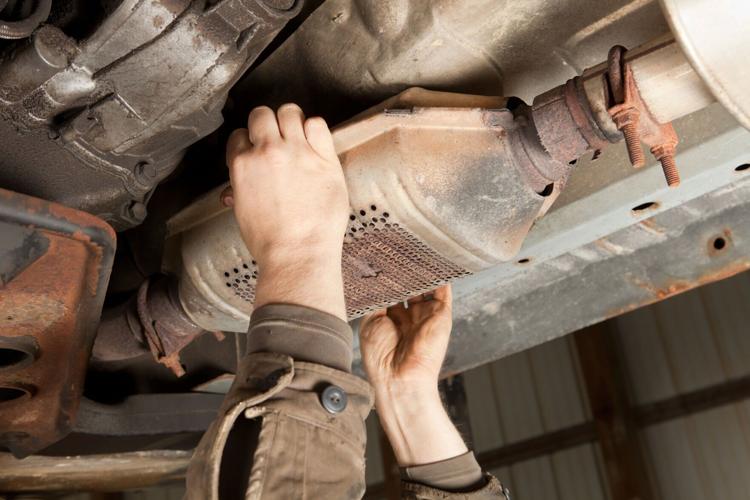 An SUV’s catalytic converter is removed at a salvage yard.

Two suspects stole catalytic converters out of these Atlas Prep activity buses in May in front of the high school near Fountain and South Academy boulevards.

An SUV’s catalytic converter is removed at a salvage yard.

The chair of Aurora City Council’s public safety committee plans to introduce a proposed ordinance next week for mandatory minimum sentences for auto theft in a move he says is intended to make Aurora's ordinances the "most punitive" in Colorado in the hopes of combating the spiraling crime.

The proposal includes a mandatory jail sentence from 60 days up to 120 for habitual offenses, 10 days in jail for failing to appear on a car theft charge and tougher penalties for stealing essential vehicle parts. State law caps jail sentence for violating municipal ordinances at 364 days.

"The goal will be to make Aurora the most punitive city in the state to steal a car," said at-large Councilmember Dustin Zvonek, who is proposing the ordinance. His proposal also includes a resolution making clear the need for a statewide approach to reducing auto thefts.

Also under state law, second-degree motor vehicle theft is a Class 1 misdemeanor if the car is worth less than $1,000.

"State law has become so permissive when it comes to auto theft,” Zvonek said.

Zvonek said Aurora has had a 239% increase in auto thefts from 2019 to 2021, citing data from the city attorney’s office.

He said his goal has been to do “the most that we can do as a home-rule local government to make car theft penalties more punitive in order to hopefully drive down motor vehicle thefts in the city, but understanding that there are some limitations set by state law.”

Zvonek plans to introduce the proposal at the next public safety committee meeting on June 16.

Critics of mandatory minimum sentences don’t deny the problem of spiking car thefts, but they say mandatory minimums don’t work as a deterrent the way proponents intend. Molly Gill, vice president of policy at Families Against Mandatory Minimums in Washington, D.C., said linking deterrence to the harshness of a penalty assumes an educated car thief knows about the penalty when they decide to steal a car.

Crime analysts frequently use the more everyday example of speeding as an analogy: The average person likely doesn’t know the exact penalty at the time they’re driving over a speed limit, so it doesn’t factor into their decision.

“Deterrence theory is presuming you have a rational actor doing this cost-benefit analysis before they commit a crime. And most of the time, we just know that's not true,” Gill said.

Zvonek acknowledged that the sentence, even mandatory, that an individual gets may not deter the next person who steals a car. But he hopes that it will make people less likely to do it once they know what the penalty is.

Zvonek added he hopes the proposed 120-day minimum sentence for habitual car thieves will act as a deterrent for professional car theft rings.

“Once this passes council – and I do believe it will pass council – we will advertise it like crazy. I want people to know what the penalty is," he said.

Mitch Morrissey, a former district attorney in Denver and a fellow at the Common Sense Institute, said he disagrees that car thefts can be compared to the threat of penalties for more everyday behavior, such as speeding or not paying a parking meter in the context of deterrence.

Stealing a car requires a series of deliberate actions, he said, and it also is frequently a dangerous crime because of the use of stolen cars to commit other crimes such as robbery.

"I don't see how you can liken it to not running down and pumping another dollar or two into the meter," he said.

Gill said how frequently the proposed sentence actually gets imposed will depend on charging decisions made by prosecuting attorneys. The ordinance won’t mean that every person who steals a car automatically will get the 60-to-120-day jail sentence because, in general, cases frequently end with plea bargains to a less serious charge.

“The most powerful person in the courtroom isn't the judge, it's the prosecutor,” she said. “And I think also, if you start seeing jails really fill up with people serving these sentences, you might see a different incentive at the local level not to use them – to get people to plead to lesser charges so they do less time and aren’t clogging up the jails.”

The detention facility in Aurora’s municipal center can only hold people for three days. The Denver Gazette has reached out to Adams and Arapahoe County sheriff’s offices to ask how many jail beds are available under contracts with the city.

A spokesperson for the Douglas County Sheriff’s Office said a person arrested in their portion of Aurora for state criminal charges would be brought to the county’s jail, but said Douglas County doesn’t have a contract with Aurora since so little of the city is in their boundaries.

Analysts, such as Gill, say that, broadly speaking, the certainty of getting caught has more of a link to deterrence than the penalty itself, citing clearance rates for auto thefts – cases in which police make an arrest – as a key marker of that certainty.

“I think the city would be a lot better off trying to figure out how they can make it more likely that people will get caught and brought to justice for stealing a car,” Gill said. “And that may have to do with reforms to policing or more cameras in neighborhoods, or better even better streetlights.”

Zvonek’s proposal also includes a resolution that includes a directive for the city manager to create a fund for reimbursing impound fees for people to get their stolen cars back. Zvonek said his plan is for funds to come from increased restitution and penalties for theft of essential parts.

Details aren’t yet clear on how the budget for Aurora’s municipal court will address a potential increase in car theft cases if the ordinance passes. The Denver Gazette has requested data from the municipal court about numbers of cases filed under the city’s car theft ordinance and the outcomes.

Zvonek said while is goal is to decrease car theft cases in the long term, he expects the municipal court’s workload to increase. He said he has asked city prosecutors and the presiding judge to let him know if they need more resources.

“We know that there'll be more [cases], but we don't know how much more,” he said. “We want to ensure that we can balance the additional workload that we inevitably believe that we will have going forward.”