In this file photo, state Rep. Shane Sandridge, R-Colorado Springs, center, meets with opponents of a bill to increase school immunizations by creating a state form that would be required to receive exemptions for school children on May 1, 2019, before a five-hour hearing on House Bill 19-1312. 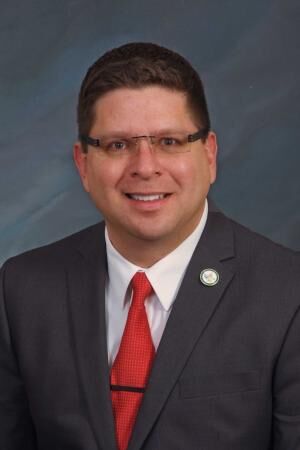 State Rep. Shane Sandridge said on Wednesday that he was suspending his reelection campaign, just days before the Colorado Springs Republican was scheduled to seek the nomination for a third full term at Saturday's GOP district assembly.

Within hours of Sandridge's announcement, former two-term Mesa County Commissioner Rose Pugliese filed paperwork to run in House District 14, a seat that covers portions of the north side of Colorado Springs, including the Briargate and Rockrimmon neighborhoods.

Pugliese, an attorney who moved to Colorado Springs in late 2020 and briefly considered a run for secretary of state, is one of three GOP candidates for the heavily Republican seat.

"I am running for HD 14 because I have been engaged in the legislative process for years and have both the legislative knowledge and political experience to best represent the people of HD 14," Pugliese told Colorado Politics in a text message. "This is an unexpected opportunity, but I am grateful to be in a position to run at this time."

In an email to supporters, Sandridge said he arrived at the decision to halt his campaign after last weekend's record-setting debate over a Democratic-sponsored bill to enshrine the right to an abortion in state law. He added that he was "excited to hand the baton to another freedom fighter" in the district.

"It is time for the next generation in House District 14," Sandridge wrote.

"After five years in the Colorado House of Representatives, I am suspending my reelection campaign and returning to the private sector after my current term ends in January. After the recent 25-hour marathon debate against the radical abortion bill, I realized I gave all that I can give and it will soon be time for fresh blood. For five years, I unapologetically fought for my constituents and conservative values, and never rolled over to the Democrats. I refused to sway and my record shows this commitment."

Added Sandridge: 'It's been an honor to serve House District 14, and I will be on standby if God calls me to service in the future."

The investment consultant and former police officer was appointed to the seat by a Republican vacancy committee in 2017 and has won reelection twice. He replaced Republican incumbent Dan Nordberg, who stepped down after being appointed regional administrator of the Small Business Administration by the Trump administration.

Sandridge has come under fire from fellow Republicans in recent months for his role as a lead sponsor of a bipartisan 2019 state law that reduced the penalty from a felony to a misdemeanor for possession of up to 4 grams of certain illicit drugs, including fentanyl. The potent synthetic opioid has been implicated in an alarming rise of fatal overdoses.

'A mistake was made': Calls grow louder to reverse 2019 law that lowered penalty for fentanyl possession

Republican John Pitchford, an Army veteran and retired dentist who resigned last fall as the El Paso County Republican Party's treasurer, tore into Sandridge in a statement declaring his candidacy in House District 14 on Monday, before Sandridge withdrew and others joined the primary field.

"My opponent in this race reached across the aisle to sponsor a bill to de-criminalize the possession of fentanyl — America’s most dangerous drug," Pitchford said. He added that the recent deaths of five Commerce City residents allegedly due to fentanyl overdoses leads to one conclusion: "[W]e now know the passage of this bill was a deadly blunder which must be corrected."

Gov. Jared Polis, Attorney General Phil Weiser and leading state lawmakers are scrambling to address the crisis. On Wednesday, a coalition of civil rights and health-advocacy organizations asked lawmakers to treat the rise in overdoses as a public health emergency and to refrain from tightening drug possession laws, arguing it would "do more harm than good."

Sandridge pointed out in a recent Colorado Public Radio interview that anyone dealing or planning to distribute illegal drugs — including fentanyl — can still be charged with felonies. He also called out fellow Republicans for telling "lies" by suggesting otherwise in attempts to score political points, CPR reported.

“This is politics. It’s a political year, it’s a voting year," Sandridge said, noting that some "want to go after" state Rep. Leslie Herod, D-Denver, and state Sen. Pete Lee, D-Colorado Springs, "and say that they kill people due to this bill." He added: “I don’t care what party you’re in. Just tell the truth."

Sandridge told Colorado Politics in a text message that the email he sent to supporters summed up his motivation for suspending his campaign, adding that there were "no other issues."

In addition to Pugliese and Pitchford, a third Republican, Chris Hohn, is running for the seat. He filed candidacy paperwork on Wednesday after Sandridge announced his withdrawal.

In order to make the June primary ballot, potential GOP candidates will need to win support from at least 30% of the delegates to the HD 14 Republican assembly, set for Saturday in Colorado Springs.

Democrat Rob Rogers is running unopposed for his party's nomination.

The House on Saturday wrapped up more than 23 hours of debate  — likely a state record — on a proposal to enshrine the unequivocal right to an abortion in state law.