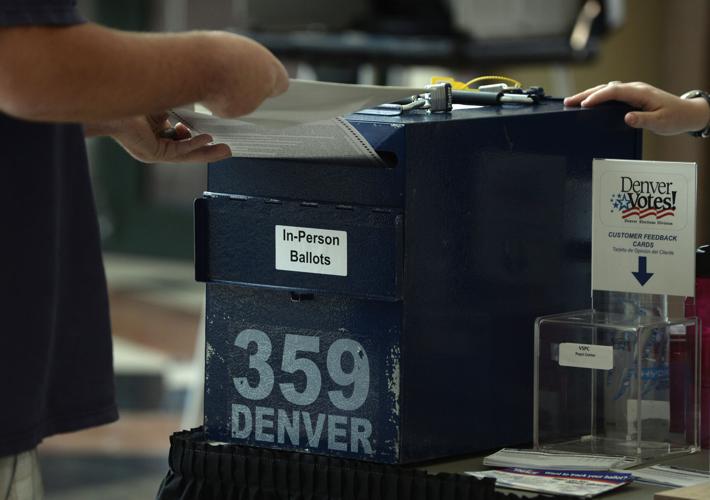 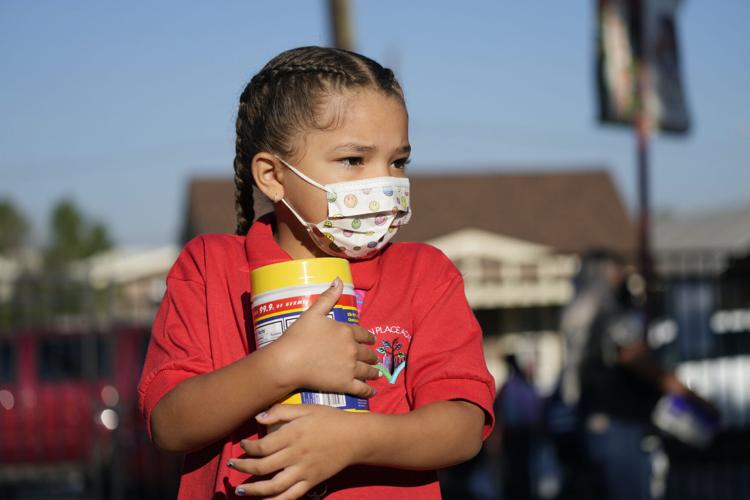 In this file photo, Dezirae Espinoza wears a face mask while cradling a tube of cleaning wipes as she waits to enter the building for the first day of in-class learning since the start of the pandemic at Garden Place Elementary School on Monday, Aug. 23, 2021, in north Denver.

In this file photo, Dezirae Espinoza wears a face mask while cradling a tube of cleaning wipes as she waits to enter the building for the first day of in-class learning since the start of the pandemic at Garden Place Elementary School on Monday, Aug. 23, 2021, in north Denver.

A Republican state lawmaker from Colorado Springs says he's concerned that the controversial chief of the El Paso County Republican Party sent school board candidates a questionnaire that focuses on elections and voting fraud while ignoring some key education issues.

One-third of the questions in an email sent by the county GOP to school board candidates are devoted to matters popular among election conspiracy theorists who maintain the 2020 election was rigged, despite no credible evidence having emerged to support the contention.

The six-part questionnaire, distributed over the weekend by Vickie Tonkins, the El Paso County Republican chairwoman, asks questions on several hot-button topics, including whether candidates oppose teaching critical race theory and support getting rid of mask and vaccine mandates.

It also asks whether candidates will vote to fire school district superintendents who have imposed mask or vaccine mandates, which have sparked controversy and protests in some local districts in recent weeks.

"The El Paso County Republican Party is interested in highlighting great candidates who are affiliated with the GOP and aligned with our issues," Tonkins says in the email. "Even though these races are classified as non-partisan, the county party is willing to step in and help where appropriate."

A pair of questions about the results of the 2020 election and the voting and tabulation equipment El Paso County uses to conduct elections have at least one Republican official crying foul over the questionnaire.

After warning the school board candidates must answer every question in order for their questionnaire to be considered, Tonkins asks if they "support eliminating the use of Dominion Voting Systems" and if they "support implementing a full forensic audit of the 2020 Election in Colorado."

Denver-based Dominion makes the equipment and software used to conduct elections in 62 of Colorado's 64 counties. It's been a target in unfounded claims by supporters of former President Donald Trump that the company's equipment was used to steal the election. Dominion and an executive with the company are seeking billions of dollars in damages from the Trump campaign, members of Trump's legal team and several right-wing news outlets in defamation lawsuits.

“Once again, without even talking with or consulting with the GOP Executive Committee, our lone-wolf chair has inserted herself as the sole arbiter of all candidates running for school boards all across the county," said state Sen. Larry Liston, R-Colorado Springs, in a text message to Colorado Politics.

“While (critical race theory) and mask mandates are important issues, school board candidates have little or nothing to do with the election issues or voting systems," he said.

Liston, who has clashed with Tonkins repeatedly over the last 18 months, added that she skipped a number of questions about education issues many Republicans consider important, including school choice, charter schools and the power the teachers union has over teachers.

In an email to Colorado Politics, Tonkins said: “The questionnaire addressed questions important to voters.”

The Colorado Republican Party unveiled a list of 10 priorities ahead of the 2021 and 2022 elections, ranking "Expand Educational Choices" as No. 3.

A spokesman for the State GOP didn't respond to a request for comment.

Silverton is about as vaccinated as it can get, but COVID still isn’t over there

Southwest Colorado's San Juan County can boast that 99.9% of its eligible population has received at least one dose of COVID-19 vaccine, putting it in the top 10 counties in the nation, according to data from the Centers for Disease Control and Prevention.