Denver City Council made history Monday evening when it approved the mayor’s 2021 budget, an 806-page document that reflects nearly $5.2 million in council amendments — the most mayoral concessions that have ever been given to the city’s legislative branch, according to Council President Stacie Gilmore.

Despite Denver facing an estimated revenue loss of $190 million next year that will require furlough days for city staffers and budget reductions for numerous city agencies, Denver Mayor Michael Hancock agreed to make room in the $1.3 billion budget for the majority of the council’s requests, including a greater investment than what he first proposed toward the Support Team Assisted Response (STAR) program, which sends some 911 calls to mental health professionals instead of armed police officers. Other council wins include funding for eviction legal defense and prevention, a digital inclusion program, park restrooms and an expansion of the Office of Aging, among others.

“It’s historic,” Gilmore said in a phone interview. “I really am so proud of my colleagues. We talked it out — how democracy should work. We debated. We dug into it. We got more information. We raised the bar on how we were vetting asks.”

“We really rallied together,” Gilmore told Colorado Politics on Friday. “I’m elated that we were able to come together to do council’s work and, in partnership with the administration and Mayor Hancock, are able to present to the citizens of Denver a budget for 2021 that I believe reflects both the mayor’s values right alongside City Council’s values, especially from an equity lens.”

The city’s executive and legislative branches spent a month playing tug-of-war over council amendments and funding sources, but the 13-member council ultimately passed the budget in a nearly unanimous vote Monday after Hancock found agreeable pots of money to pull from to support the council’s list of changes. 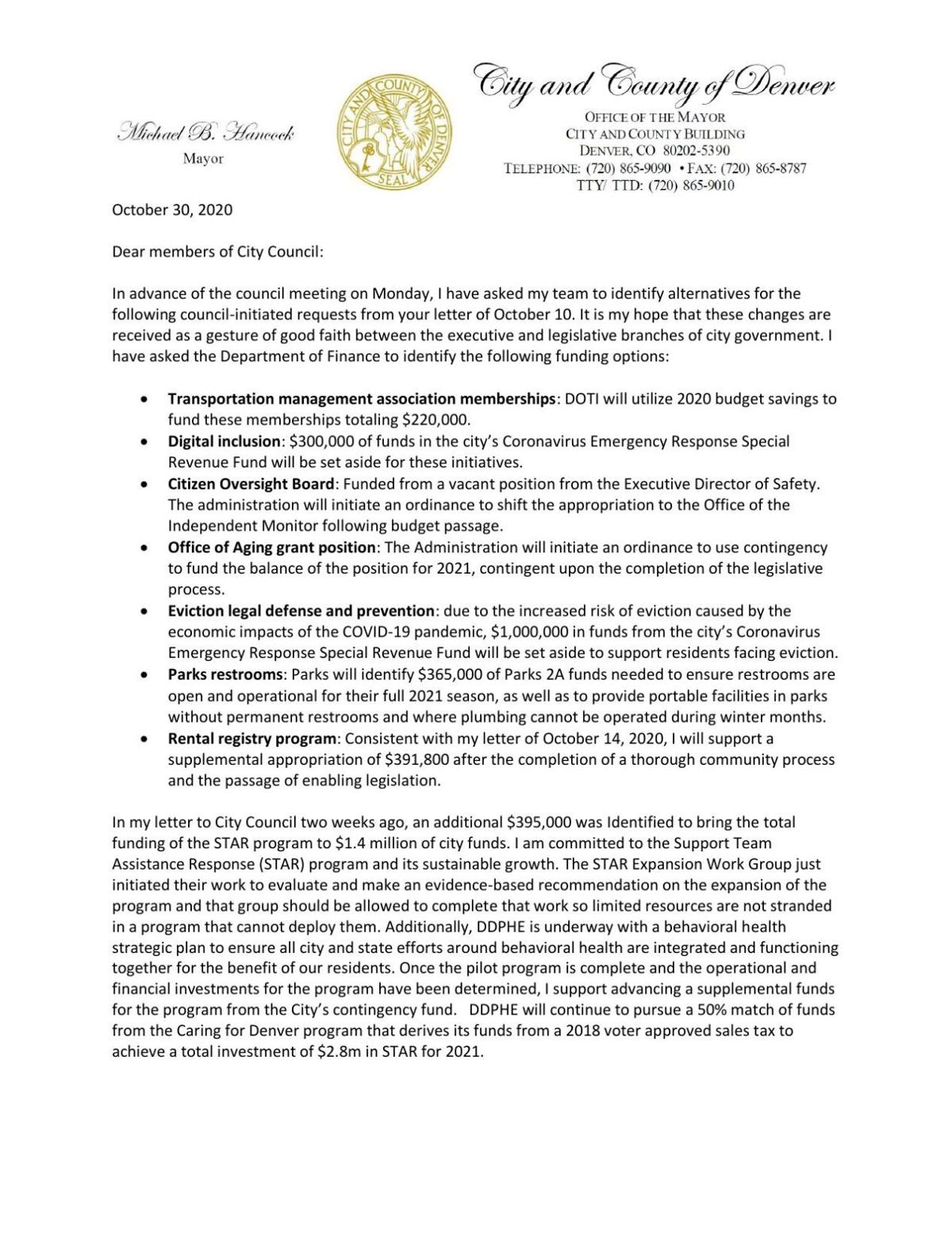 The sole vote against the budget Monday evening came from Councilwoman Candi CdeBaca, who had proposed a handful of budget amendments intended to move millions in police funding for initiatives such as rental assistance, trash service for people experiencing unsheltered homelessness, and equity in the city’s marijuana industry. However, none of the proposals received support from other council members.

“While we forced the Mayor's hand in a few minor amendments totaling more than Council has ever gotten, it was still an imperceptible amount of the budget,” CdeBaca told Colorado Politics in a text message Monday. “Our budget as a moral document reflects major moral deficiencies. In a global pandemic and housing crisis AND racial uprisings demanding we defund the militarization of our city, we did next to nothing to substantially shift our priorities.”

She added: “I hope Council takes their minimal wins in asking nicely and not amending and learns that it was the threat of collective power that moved the Mayor. That threat if it had remained strong did not have to have a limit. Our body could force any and all amendments if we had felt compelled.”

Councilwoman At-Large Debbie Ortega, a council veteran who has voted on 26 budgets during her time as a district and at-large councilwoman, said Gilmore “conducted a fair process that allowed us to push back on the administration, to address the needs for vulnerable communities as identified through public input from Denver residents at our Monday night meetings.”

She also commended Hancock for his “collaboration and willingness” to incorporate the council’s requests.

Councilman Kevin Flynn, who has been following Denver City Council budgets since first covering them as a reporter in 1981 and has “probably been through as many city council budgets as Ortega,” said this budget stands out.

“I think Council President Gilmore has done a really good job structuring a more process-oriented approach this year,” he said in a phone interview. “I think it was very well-run.”

Gilmore and President Pro Tem Jamie Torres made history when they were unanimously elected in July as the first Latinas to lead the council. That same month, the council set budget priorities during their annual retreat, where they agreed to use the city’s stretched resources to address emergencies and the “intense desire” for substantive change, with the goal of rebuilding Denver’s economy and communities more equitably than before.

As Gilmore and Torres led the council into a series of 19 budget hearings, they did so with the deliberate aim of serving those “who have long gone overlooked and under-consulted.”

That goal also applied, they said, to the agencies and offices they were hearing from during budget deliberations.

“Some of those departments had never presented to City Council before,” Torres said in a phone interview, naming the Agency of Human Rights and Community Partnerships and the Office of Children’s Affairs as two examples. “And so it wasn’t just a point of critique, that we want to be able to scrutinize your budget — no — it was also about wanting to be able to elevate the good work that some of these agencies are doing, even if they’re very small, because they matter so much right now when a city is facing a pandemic.”

Torres and Gilmore both hope that their leadership, scrutiny and collaboration set a new bar for council budget processes in the future.

“I think what we're establishing is that any council shouldn't be satisfied to be in the dark on anything,” Torres said. “And what we're doing is not just shining a light on the city budget and department decision-making, but also exposing all of the ways in which we know we need to do our job and creating some kind of conversation to be part of. It's a big city and a deep city budget, so that was definitely our way of putting our foot in the door and opening it a little bit wider.”

“If we're able to accomplish this as an elected body — getting more budget asks than any other council has in this time of our lives — I'm super excited, when we start to move out of this recession and COVID, what this body, by using these tools, could actually accomplish in getting concessions more so,” Gilmore said. “We've set a new floor, and I'm excited to see how councils might utilize that in the future."

The more than 800-page document outlines a plan to close a $190 million budget gap caused by a coronavirus-addled economy. City employees face furlough days and many agencies, including the police department, will see cuts. However, some areas, such as the city’s housing department and a police reform program, will see increases.