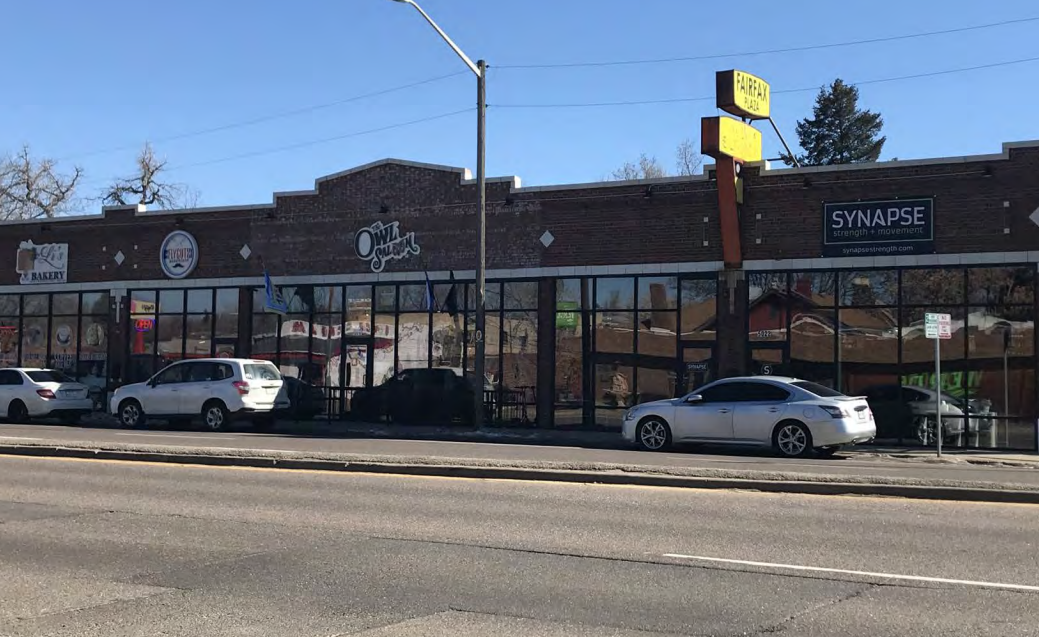 A stretch businesses along the East Colfax corridor in Denver. 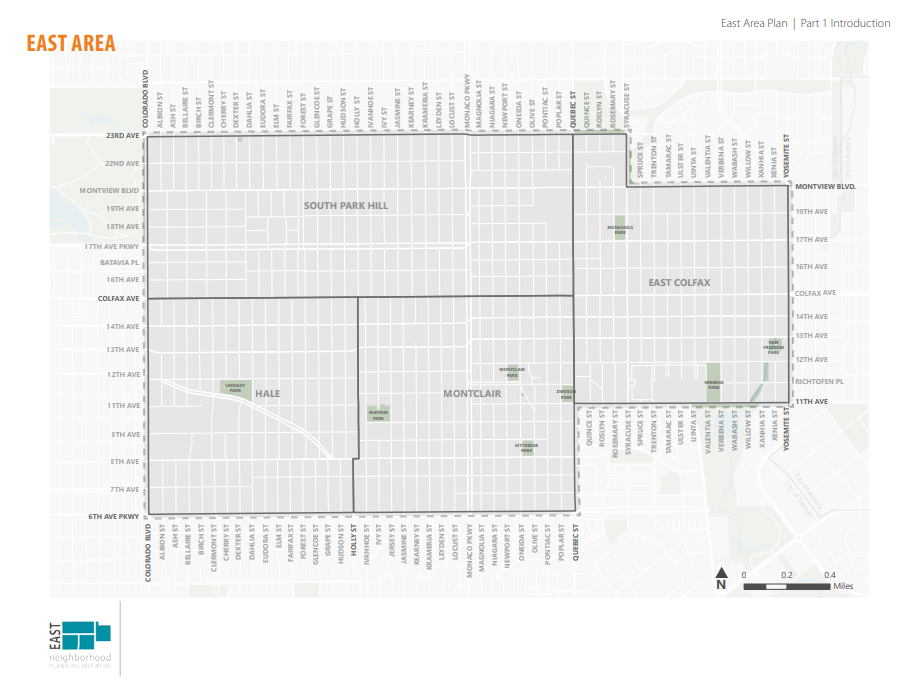 The geographical area of the East Area Plan. 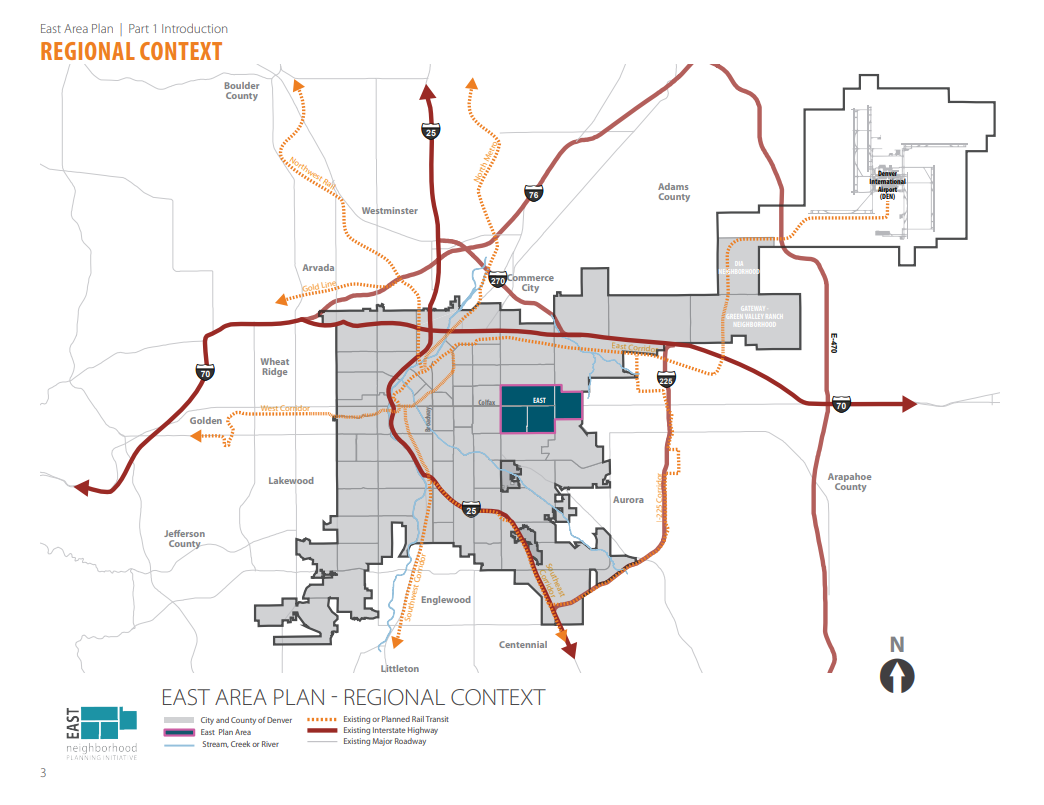 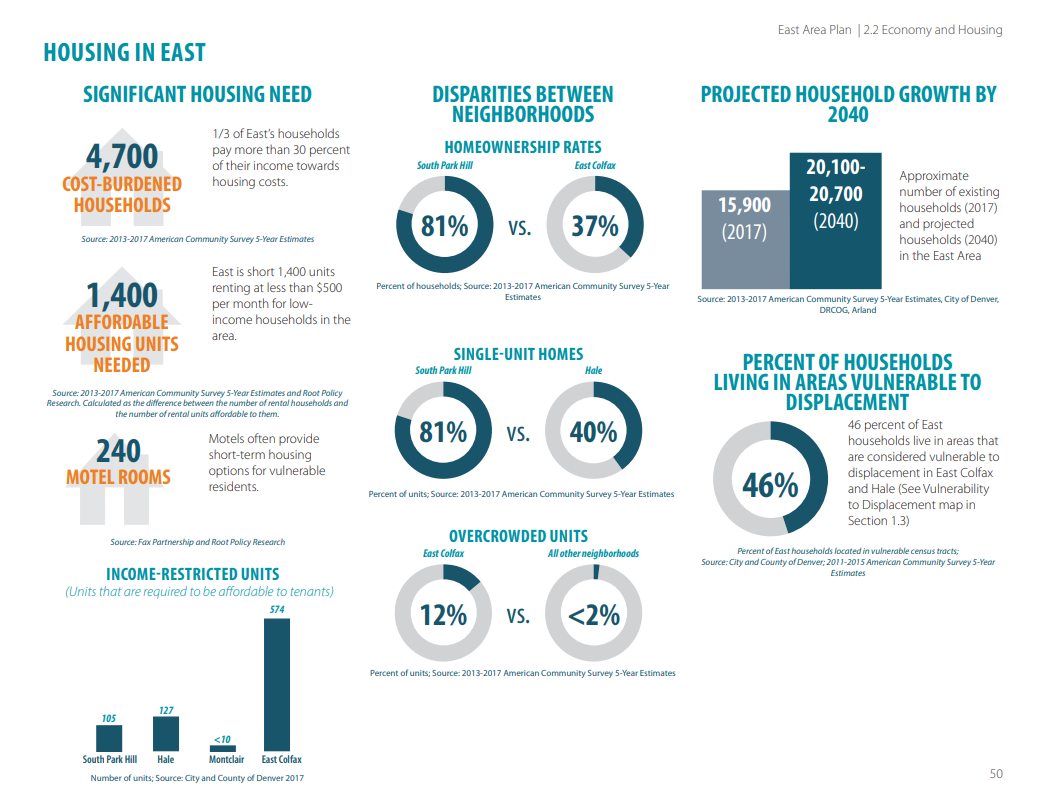 The Denver City Council approved a long-term vision on Monday night meant to guide growth and development over the next two decades in Denver’s Hale, Montclair, East Colfax and South Park Hill neighborhoods.

After a one-hour public hearing and two-hour debate, the East Area Plan was adopted just before 11 p.m. in a 12-1 vote. Councilwoman Candi CdeBaca voted in opposition.

"It was a tough road to get here, but where we have gotten is really amazing," said Amanda Sawyer, who represents the Hale and Montclair neighborhoods. "I'm willing to defend this plan in the grocery line or anywhere else in this community."

The 255-page policy recommendations document that was shaped over a three-year process provides a road map to increasing housing and business density in the four neighborhood corridor, which will support the bus rapid transit project planned for East Colfax Avenue.

The plan aims to beef up the city’s affordable housing stock, ensure local businesses “remain and thrive,” preserve the diversity of East Colfax Avenue and surrounding architecture, and provide more trees and open spaces, as well as make it safer and more accessible to get around.

Some buildings along Colfax are recommended to grow from three stories to five, but only under the agreement that they will provide a “community benefit,” Curt Upton, Denver’s principal city planner, said Monday night. The term “community benefit” includes affordable housing, public parks, preserving a character building and providing afforded commercial space to local nonprofits, artists or existing tenants.

The plan is the third under Community Planning and Development’s Neighborhood Planning Initiative, which gives residents an opportunity to provide input on how citywide goals are applied in their areas.

However, some residents have argued that the council’s vote should have been delayed not only on the basis that there not enough community engagement, but also that the plan would exacerbate displacement, which already threatens 46% of households in the East Colfax and Hale neighborhoods, according to CPD.

In particular, many residents and neighborhood leaders take issue with a sentence in the plan that reads: “Single unit areas should remain primarily single unit.”

The controversial sentence was removed by the Denver Planning Board, whose members are appointed, in a 6-3 vote following a public hearing on Oct. 7. But council members Sawyer and Chris Herndon, who represent neighborhoods included in the plan, pushed forward an amendment Monday to reinsert the sentence, a move they said late last month they planned to do to better reflect community input as a whole.

During a public hearing Monday, Brendan Greene, a member of the East Colfax Community Collective, told council members that the sentence reflected only a small interest and that the full plan does not reflect the group’s input. The ECC is a grassroots organization made up of refugees, immigrants, small business owners, renters and homeowners that advocates for anti-displacement issues.

The group argues that the East Area vision “reinforces rather than challenges broken zoning tools that have historically and continue to fail” people of color and other vulnerable, underserved communities.

But Laura Aldrete, CPD’s executive director, says that prioritizing affordable housing and preventing displacement for both families and businesses along East Colfax is something the plan “tackles head-on.”

Through this three-year process, she said at the council meeting Monday, planners formed “great partnerships” that have equipped the city with “better policy guidance” that will serve residents in east Denver.

“We need to have a range of housing options within each neighborhood that allows for ‘missing middle’ housing — homes like duplexes, triplexes and rowhomes — while ensuring that these new homes continue to reflect the surrounding architecture and design of the neighborhood,” Aldrete said in a recent interview with Colorado Politics. “We have beautiful, historic home designs in Denver, and we can be proactive in protecting what’s beautiful and protecting our diverse cultural legacies while introducing more housing options at a range of price points.”

The East Area Plan is grounded by Blueprint Denver, the city’s land use and transportation plan for the next 20 years.

"I'm proud of the work that we did on this, and not everyone got what they wanted," Herndon said. Juggling a number of constituents, "you find a sweet spot, and I believe we are there."

The Denver City Council approved a long-term vision on Monday night meant to guide growth and development over the next two decades in Denver’s Hale, Montclair, East Colfax and South Park Hill neighborhoods.

Laura Aldrete discusses her first year as director of Denver's Community Planning and Development Department and the directions the city is moving in.