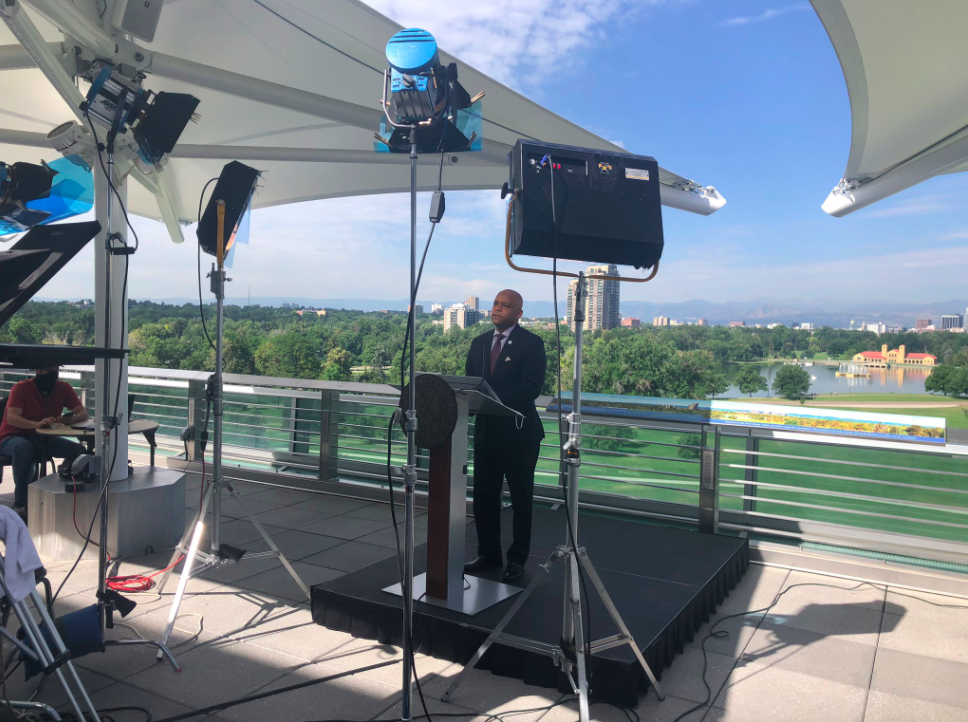 Denver Mayor Michael Hancock delivers the annual State of the City address virtually from the balcony of the Denver Museum of Nature and Science on July 27, 2020. 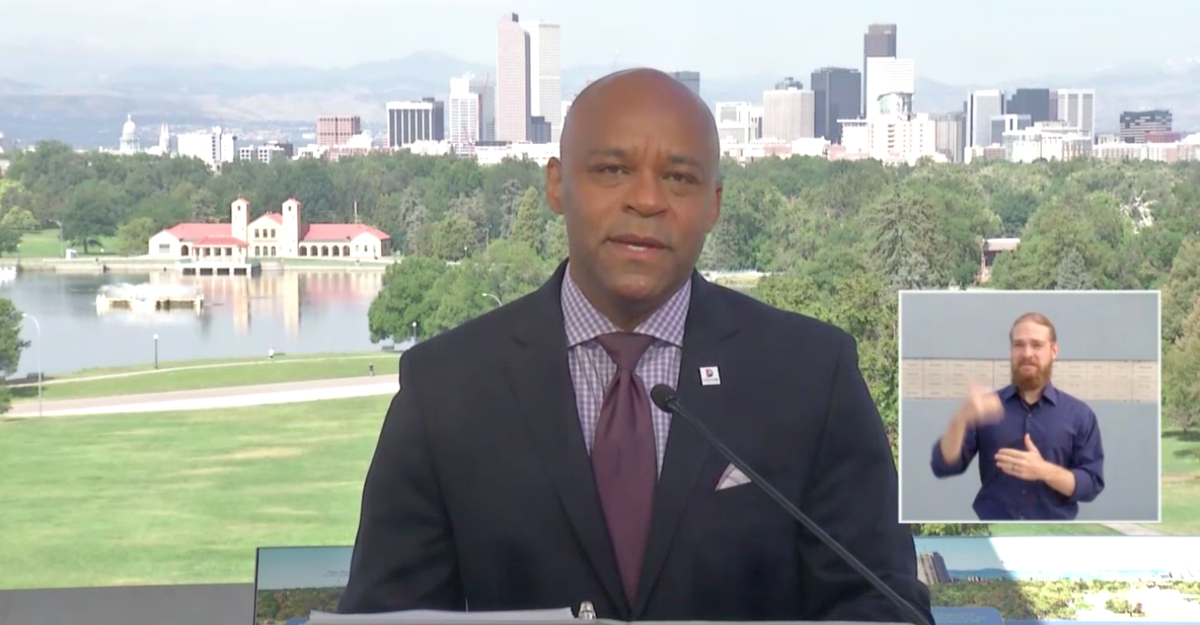 Denver Mayor Michael Hancock delivers the annual State of the City address virtually from the balcony of the Denver Museum of Nature and Science on July 27, 2020.

Denver’s State of the City address looked and felt differently this year.

Mayor Michael Hancock delivered the annual speech — the first to ever be given virtually — from the balcony of the Denver Museum of Nature and Science on Monday morning as a safety precaution in the height of the coronavirus pandemic.

“For now, the best way to be together is to be apart,” the city’s 45th mayor said. “And staying together, as a community, is more important than ever before.”

Hancock’s speech unsurprisingly zeroed in on the pandemic, one that could likely shape his legacy. He somberly acknowledged the hundreds of residents and thousands of Coloradans who have died from the virus and the threat COVID-19 has posed on the city's health care system and quality of life.

“It has wreaked havoc on our economy and left thousands unemployed," he told the community. "But you have shown resolve.”

The mayor praised the city’s essential workers, including grocery store employees and first responders, who he said have “carried us on their shoulders,” as well as the hundreds of city employees who were deployed to the city’s emergency operations center and rose to the challenge.

Hancock touted the two 24-hour emergency homeless shelters the city established in April at the National Western Complex and Denver Coliseum as Denver’s homeless shelters struggled with crowding and staffing shortages during the outbreak. He also highlighted the hundreds of hotel and motel rooms the city has leased for people at high-risk for COVID-19 complications and for people who have been medically referred for isolation but don’t require advanced medical care.

He took a jab at what he said was a lack of national strategy for testing and praised the city and state’s joint effort, despite a lack of federal leadership, to launch in late May the Pepsi Center coronavirus testing site, the largest drive-up testing center in Colorado.

“At that site, and from our mobile testing unit and community testing sites around Denver, we’ve helped tens of thousands of people get tested,” Hancock said.

Hancock also highlighted the fact the city was among the first in the state to take the “painful action” of issuing a stay-at-home order in late March and mandating face coverings in early May.

“This is far from over, and I’m asking you to stay the course,” he said. “The risk of politics interfering in our recovery is too great. A mask isn’t a political statement. Social distancing isn’t an attack on freedom. These temporary public health measures are about social responsibility, yours and mine — to ourselves, each other and the welfare of our city, state and nation.”

Hancock acknowledged the now $227 million budget shortfall the city is facing and his plans to help the city recover, which has included providing financial support to more than 800 small businesses, providing free personal protective equipment kits to vulnerable businesses and nonprofits, and ramping up food drives and free testing.

The city has also set up the Long-Term Recovery Committee, which has developed a Recovery Action Plan, to get the city’s workforce back on its feet.

“Where we are today isn’t where we thought we’d be back in January. But know this: We will come back better than we were before,” he said. “I know this because we have done it before. We did it after the Great Recession when we took Denver from one of the toughest economies in the country to one of the best.”

Hancock pledged to approach the financial challenges through an equity lens, “so the people working hardest, who’ve been hit the hardest, don’t face the brunt of it alone.”

He also promised to continue to call on Congress to renew unemployment benefits and provide direct relief to cities and states.

“Our local recovery must be supported if there’s going to be a national recovery,” he said.

He said he plans to provide more opportunity to small, women- and minority-owned businesses by keeping public projects on track and “work to accelerate our bond and critical infrastructure programs where resources are already secured.”

The mayor said the city would remove barriers to affordable housing, beginning with waiving fees and speeding up approvals for five affordable housing projects and five environmentally-focused projects “to show where our priorities are.”

Hancock also focused on the growing crime rate, particularly among the youth.

Denver has seen a 50% increase in shootings and killings this year compared to last year, according to the Denver Police Department.

In the first six months of this year, 327 guns were reported stolen, DPD data shows, representing a nearly 27% increase in gun thefts compared to the three-year average. Many of those guns were stolen by juveniles.

“The rise in crime, particularly youth violent crime, is unacceptable,” he said. “It’s a troubling trend not just in Denver, but nationwide. I will never allow it to be normalized in our city.”

To help reach the root of the problem, he said, he’s directed City Attorney Kristin Bronson and members of his administration to work with youth and youth-serving organizations to come up with a “community-driven strategy” to address the problem from “a public health perspective, not just a law enforcement perspective.”

Hancock said the city “must also live up to our moral obligation” to provide places to sleep for people experiencing homelessness.

“I know homelessness is top of mind for all of us,” he said. “The encampments that have appeared don’t represent the humane approach we have followed for years. Addressing encampments during the pandemic, following CDC guidelines and caring for those from surrounding communities has complicated the challenge.”

The Centers for Disease Control and Prevention recommends that people living in encampments should remain where they are during the COVID-19 pandemic to prevent exposure and spread of the virus. The CDC also recommends that local and state governments provide sanitation and supportive services to encampments and continue to assist people with accessing health care services, shelter, and housing if it is available.

“COVID-19 is an extraordinary circumstance requiring an extraordinary response,” Hancock said. “That’s why we are permitting temporary — and I emphasize temporary — Safe Outdoor Spaces in more managed, safer, and sanitary conditions where people can be connected to critical services.”

The city is currently in the process of identifying several locations to set up the campsites, which will be managed 24/7 and are expected to house up to 60 people each. The Denver Coliseum parking lot is “under serious consideration” as the first sanctioned spot, city officials have confirmed.

“Last year, when 80 percent of Denver voters rejected a repeal of Denver’s ordinance prohibiting encampments, we said we could do better. And we can do better,” Hancock said.

“There is an uncomfortable truth about the challenge of homelessness in our society. It’s the same truth underlying the challenge of income inequality, a hollowed-out middle class, an alarming disparity in access to opportunity, and the challenges of mental health and poverty,” Hancock said. “To those who think homelessness is just a Denver issue, I invite you to consider the commonality of our humanity and the power of collective action. That is the only way it will be finally resolved.”

Finally, Hancock addressed racism — an issue that has plagued the city and the country for years, but has boiled over in the wake of George Floyd’s death.

“These times have created another uncomfortable, hard truth we must finally face: the hard truth that racism is still a problem in law enforcement across the nation,” he said. “It cannot be ignored. And we have not ignored it in Denver.”

Hancock called the city’s police and sheriff departments some of the best in the nation.

“However, across this nation, and many painful times in our community, some have disgraced the badge through their actions and severely damaged the public trust,” he said. “I can tell you firsthand, these actions have left generations of people, particularly Black people, having a profound fear and distrust of law enforcement. This is a breach in the covenant, and as the prophet Isaiah teaches us, ‘We must be repairers of the breach, restorers of the streets we live in.’”

Following the killing of Floyd in the custody of Minneapolis police, Denver erupted in protests that resulted in violent clashes between protesters and police. At least three federal lawsuits have been filed over law enforcement’s response to protests.

Hancock highlighted the city’s co-responder and Support Team Assisted Response (STAR) programs to dispatch mental health professionals and social workers to non-threatening 911 calls alongside or in place of an armed officer.

“We’ve been moving in the right direction,” Hancock said, “and we hear the urgent call to move faster.”

Hancock noted, however, that by “zeroing in on the actions of law enforcement, is to acknowledge just one symptom of a virus that is killing us.

“Excessive and deadly force by law enforcement disproportionately towards people of color is a symptom of the deadly virus — racism,” he said.

Like any disease or public health crisis, it’s critical to develop a "vaccine," he said, which is why he has “started the process of establishing the Denver Institute of Equity and Reconciliation through public-private partnerships. Over 50 people, some of the brightest minds in academia; civic and civil rights; faith leaders; diversity, equity and inclusion experts; and public safety experts have joined me in this effort.”

The goal, he said, is for the institute to become a national research leader in racism, bias, inclusion, practices of reconciliation, and the programmatic development and trainings for law enforcement as well as public, private and education sectors.

“It’s my hope it will be the physical location where direct and honest conversations about racism will be held,” he said. “We’ll have more on this initiative soon.”

Hancock stressed the importance of a collaborative government, an equitable community and making “some good trouble” to get there, quoting the late U.S. Democratic Rep. John Lewis of Georgia, a giant in the civil rights movement.

“It won’t be long before the markings of protests are washed over, when COVID-19 has been contained through a vaccine, when our economy is reignited, when children can return to the classroom,” he said.

“What will remain is how we will co-exist together, survive together, dream together. This is the opportunity to once and for all triumph over disease and hate, and rise as a society bonded together by our mutual fellowship and hope. I look forward to locking arms with you in triumph.”

Read the Mayor’s 2020 State of the City address.

Red Rocks Community College is hoping to raise $5,000 to help its students produce a documentary titled "Because of George" to examine the "un…