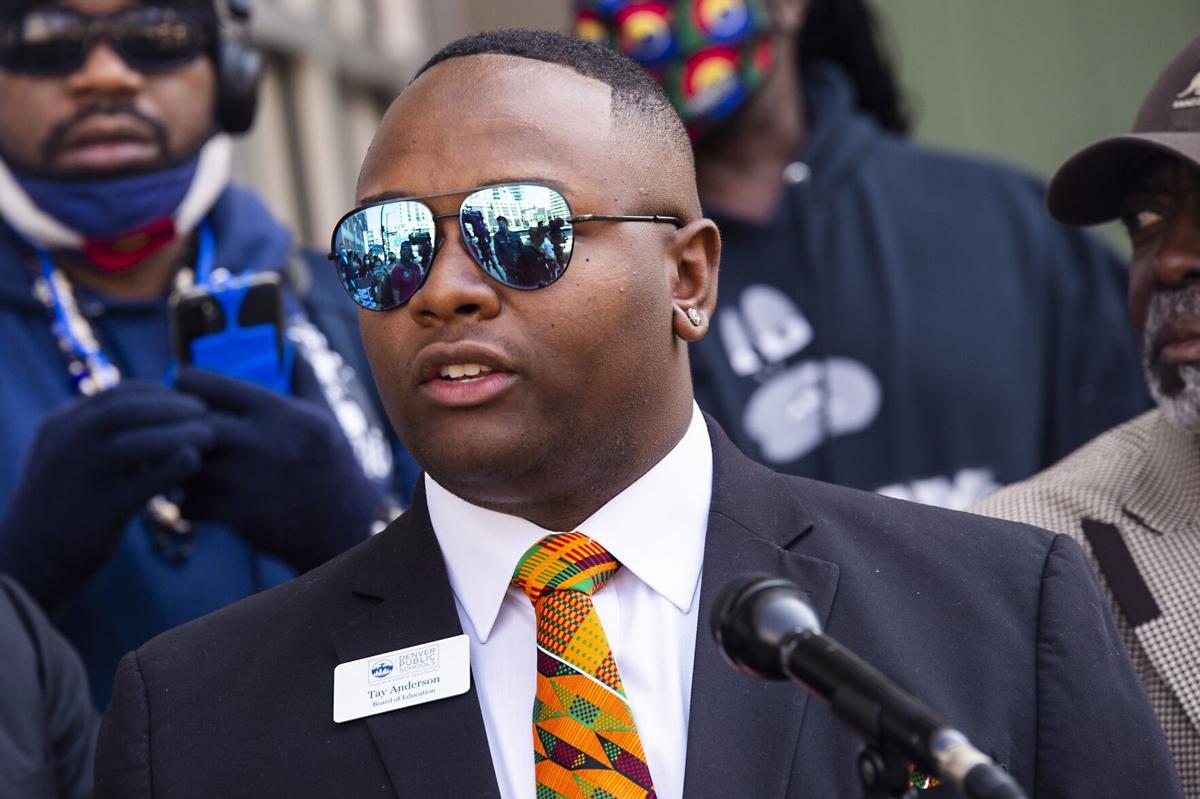 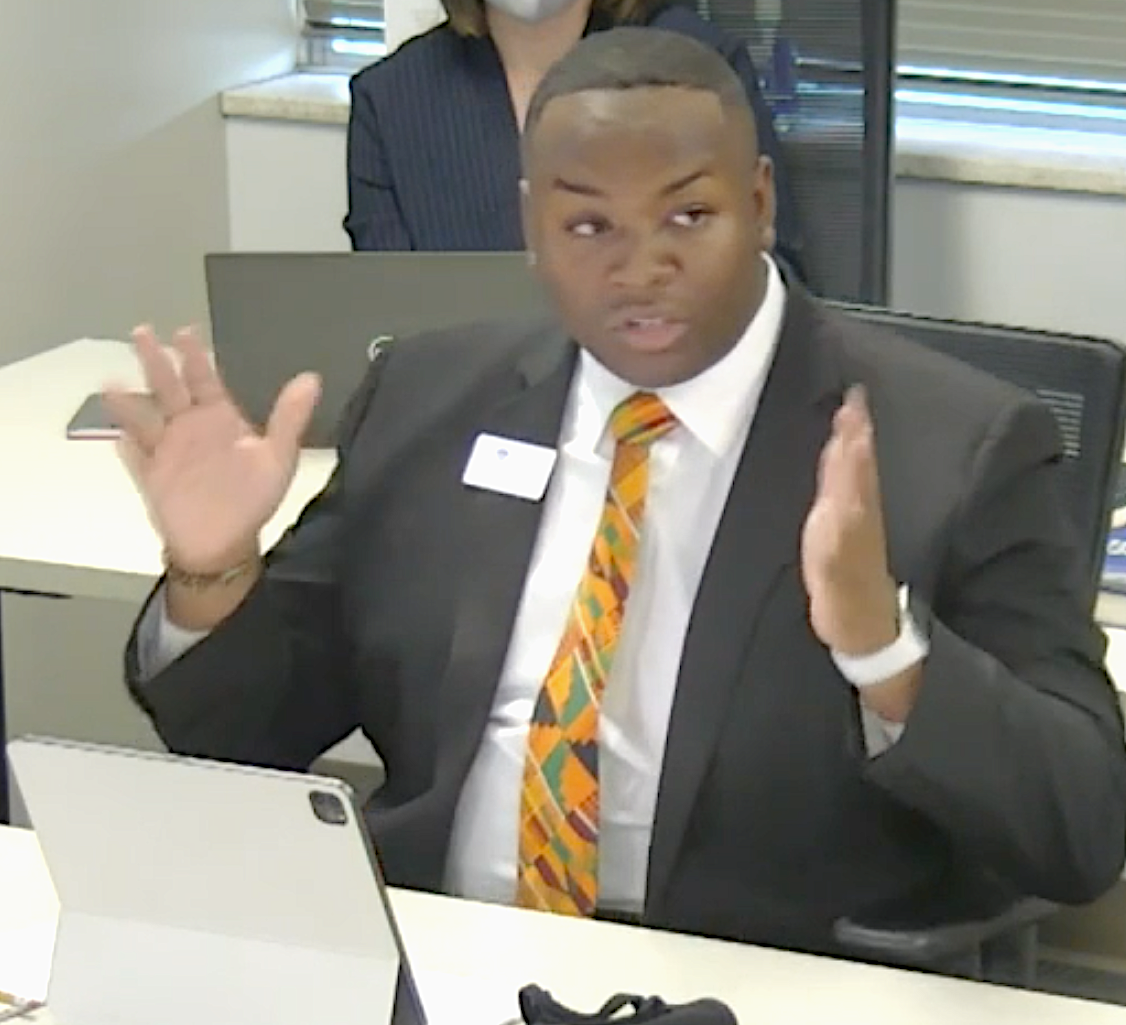 Tay Anderson speaks to fellow members of the Denver Public Schools Board, during a special meeting about his conduct and the results of an independent investigation on Friday, Sept. 17, 2021.

Tay Anderson speaks to fellow members of the Denver Public Schools Board, during a special meeting about his conduct and the results of an independent investigation on Friday, Sept. 17, 2021.

Reaction to the censure of Tay Anderson on the political front Friday was stone silence, but parents who have been critical of the embattled Denver Public Schools board member said they were still convinced he's undeterred.

Michelle Castro said nothing about Anderson's behavior in Friday's meeting surprised her. She didn't know him until she went to a school board meeting in March to complain about her fourth-grader being taught the 13 principles of Black Lives Matter.

"I didn't think that was right," she recalled Friday. "That's political, and I should be the one who decides those things for my child."

As she spoke on the virtual meeting, the board members had their videos turned off, until Anderson turned his on to make disapproving faces at Castro, which she said rattled her at the time.

Afterwards, on his official Denver Public Schools Twitter account, he posted a picture of himself looking at Castro and tweeted, "The face you make when folks make bigoted remarks during public comments. Black Lives Matter — PERIOD."

Castro said she was just a parent who felt she was speaking solely to the board about her concern, and Anderson intimidated her on social media.

"He did not take responsibility, I don't care what he says," Castro said after watching Friday's meeting. "The fact that any adult pursuing a person of a young age or having them on their Facebook or any social media, especially as a school board director, is inappropriate, period."

Tay Anderson says 'I will not resign,' answers no questions

Of both situations, she said, "I expect adults to act professionally, no matter what the subject is. They're elected to represent everybody, not just the people they agree with."

Bob Gerhardt, another DPS parent, agreed that Anderson did himself no favors Friday.

"I was hoping he would own up to his part of it," he said. "I'm sorry would have gone a long way with me. He talked about restorative, or what he called transformative, justice, but the first part of that is taking responsibility. All he did was talk about how bad Tay had been treated, and nothing I heard about how he's treated others."

Anderson maintained his supporters Friday, and they were quick to denounce the process.

Political reaction on Tay Anderson muted, but some parents already pushing back

Democratic activist Hashim Coates criticized school board vice president Jennifer Bacon and members Angela Cobián and Barbara O’Brien by noting they publicly backed Denver Mayor Michael Hancock's bid for reelection two years ago in the wake of a sexual harassment allegations against him.

"O'Brien endorsed him, Cobián opened up the women's tour at Hiawatha Davis Rec Center and Jennifer Bacon had her ass up on that stage too, but yet they want it to punish Tay Anderson? The whole thing is a farce," he said.

O'Brien and Cobian were members of a group called Women for Hancock.

Leaders from the Colorado chapter of the NAACP were also critical of how Anderson was treated, according to a statement Anderson posted on Twitter after the vote.

"The calls for censure smack of unfairness and may indeed open DPS to a civil rights inquiry," the civil rights organization stated.

Neither Hancock nor Gov. Jared Polis had immediate statements about Anderson Friday.

Hancock and Anderson have had their differences.

Last year, after Hancock and former Mayor Federico Peña alleged that the DPS board bore responsibility for the recent departure of Superintendent Susana Cordova, Anderson called the concern "absurd and false."

Twitter was relatively quiet after the meeting, beyond media outlets tweeting out their stories and anonymous critics.

Reaction rolled in from the national media, however.

Arash Mosaleh, a senior producer for "Gutfeld!" on Fox News, tweeted with a hashtag to Anderson, "You play stupid games, you win stupid prizes."

More than 200 students at North High school in Denver staged a walkout protest Monday, calling for embattled Denver Public Schools Board of Ed…