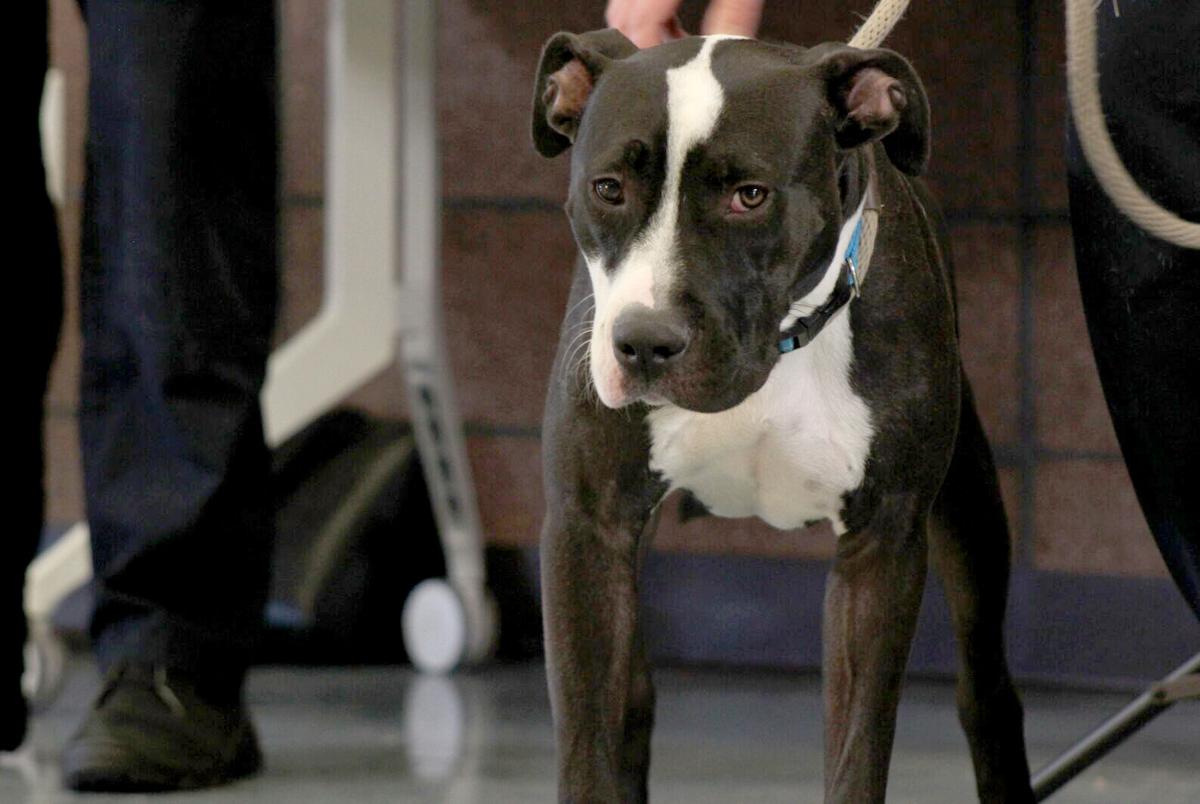 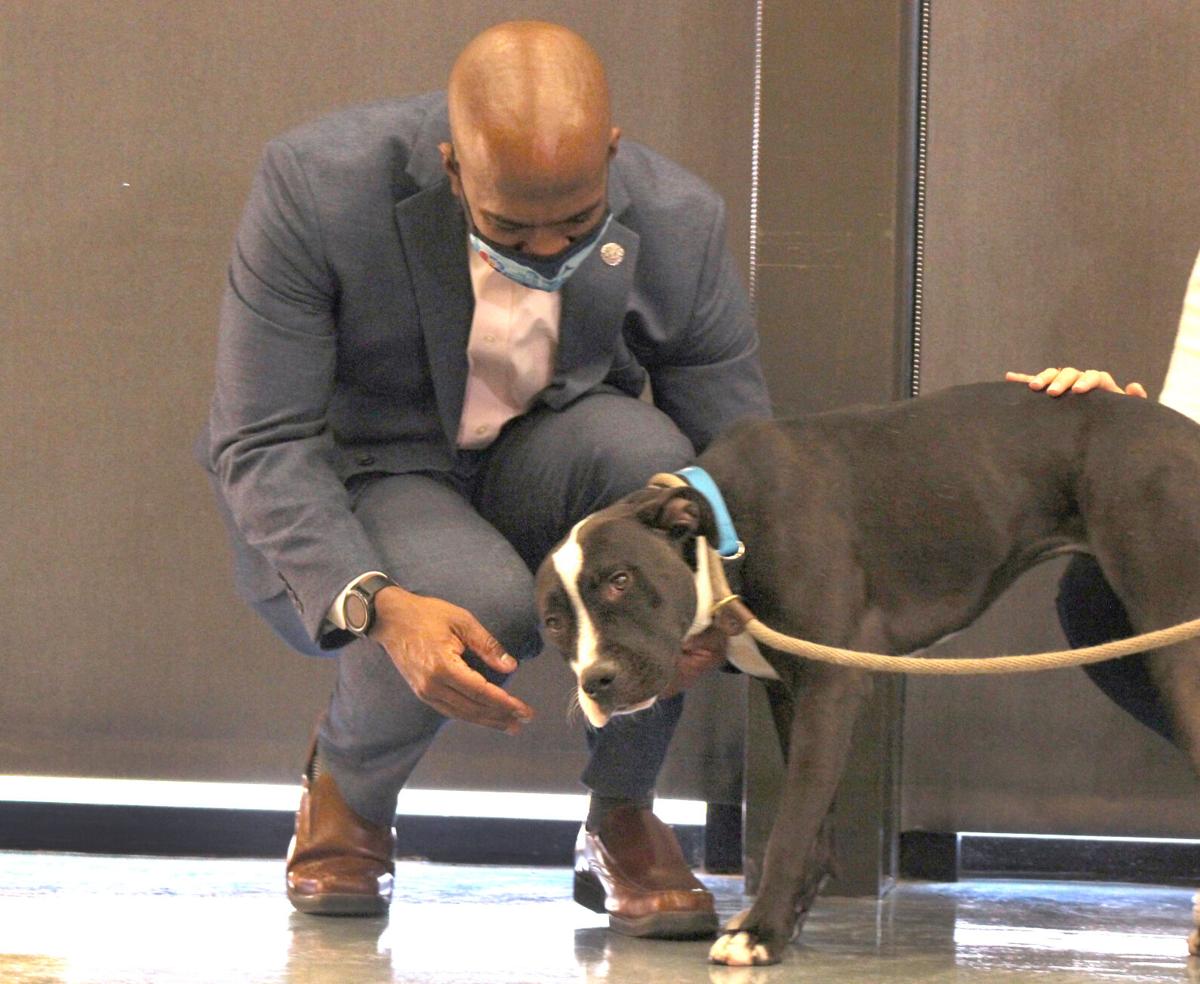 Councilman Chris Herndon of District 8 pets Penguin, a pit bull mix, at the Denver Animal Shelter on Dec. 30. Herndon led the fight to lift the pit bull ban in Denver. 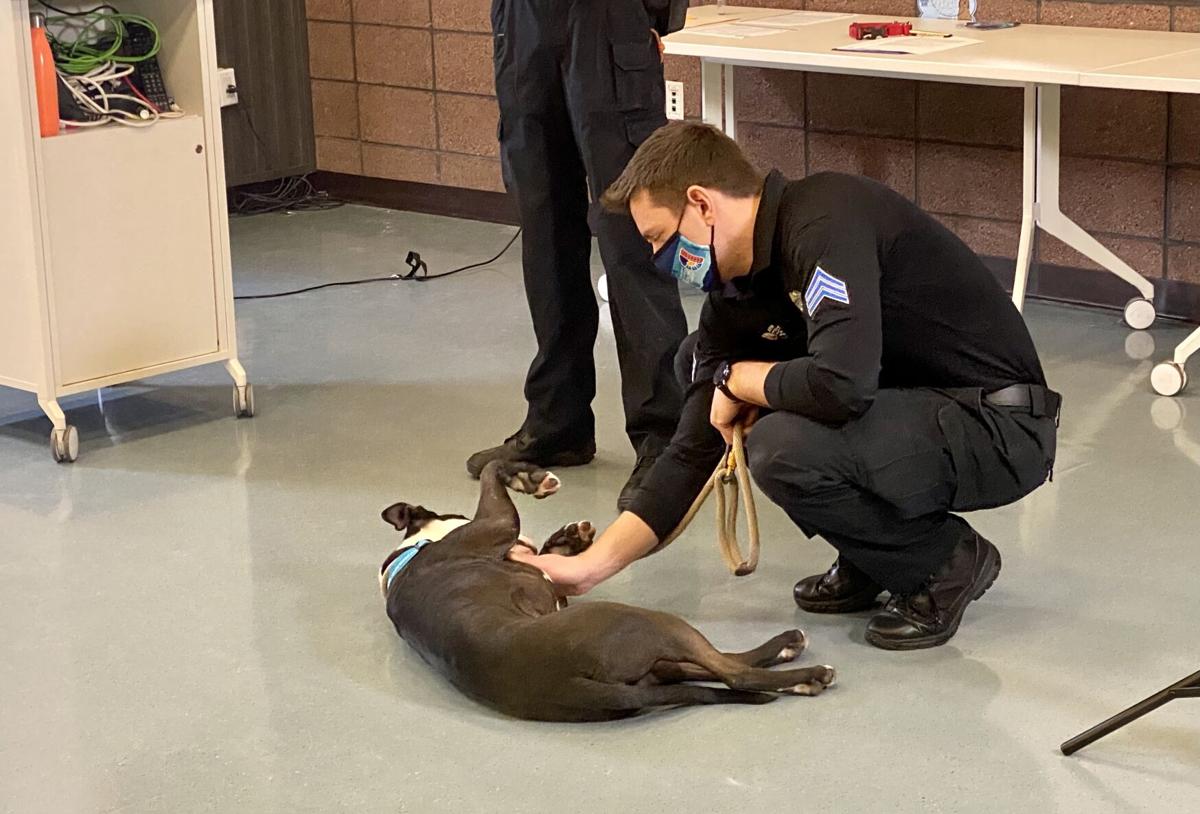 Pit bull mix Penguin rolls over for a belly rub from Animal Protection Sgt. Avery Borden during her inspection.

No one knew her name when she was found on Dec. 7 by Denver Animal Protection, roaming the Montbello neighborhood without a collar or owner in sight.

Flash forward three weeks later, however, and Penguin — inspired by her shiny black-and-white coat — is making headlines as the first adoptable pit bull in Denver in more than 30 years.

Penguin’s eligible adoption kicks off Jan. 2 and was made possible with the help of two-thirds of city voters, who passed Ballot Measure 2J this November and effectively lifted the city’s ban on the American Pit Bull Terrier, American Staffordshire Terrier and Staffordshire Bull Terrier.

“This could be an excellent model for other cities that still have breed-restrictive legislation on the books,” Denver Councilman Chris Herndon, who spearheaded 2J, said Wednesday at the Denver Animal Shelter, where staff were giving reporters a run-through of the pit bull assessment process.

The councilman successfully bypassed Mayor Michael Hancock's first-ever veto in February, when he attempted to block the effort.

As of Jan. 2, any Denverite who owns or wants to adopt a pit bull in the city must contact Denver Animal Protection to schedule a breed-restricted assessment, which is expected to take between 30 and 45 minutes.

Three DAP staffers must complete the assessment independently, each equipped with a checklist of more than two dozen items to help guide the examination of the dog, such as whether it has a “brick-like, broad skull,” “tight or close lips,” a “muscular body,” and a tendency to “carry the tail low.”

The physical checklist is based on American Kennel Club and United Kennel Club breed standards.

Penguin —  who staff estimate is between 3 and 4 years old — patiently cooperated as Animal Protection Lt. Josh D. Rolfe flipped up her ears to show that they were “rose” shaped, tugged at her neck skin, and inspected her tail.

She’s a pit bull mix, he said, sharing certain characteristics but not all.

At one point Penguin grew tired of standing, then sitting, and flopped to her belly with a sigh, as reporters stifled their laugher.

Eventually, she took to her back for belly rubs, and Sgt. Avery Borden obliged without skipping a beat.

The assessment fee is $25 per dog, and no more than two pit bulls are allowed in one Denver home. Additionally, pit bull owners will need to pay $30 to obtain a permit, plus $15 per animal annually over a three-year period, as written in the ordinance.

For more information on Penguin and the pit bull adoption process, visit DenverAnimalShelter.org.

Here's how Denver licensing for pit bull breeds would roll out starting Jan. 1