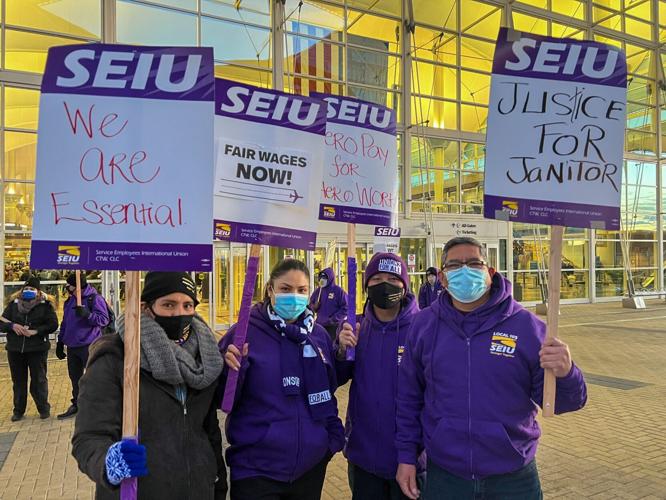 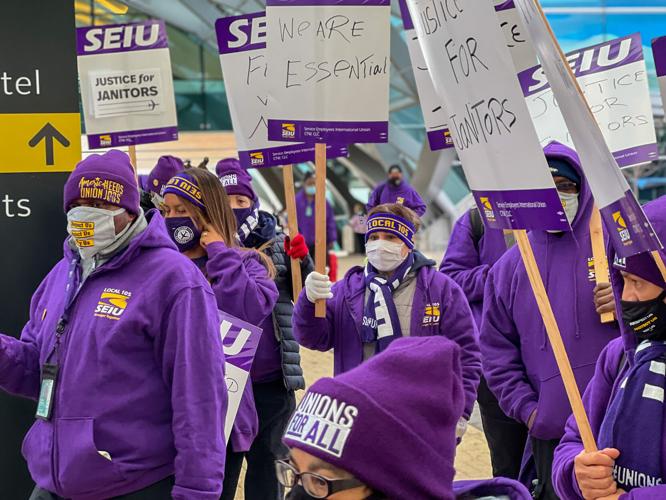 Several hours after 350 janitors walked off the job at Denver International Airport, their union has reached an agreement with the airport's contractor and officially ended the strike, labor and DIA officials confirmed Saturday afternoon.

The janitorial strike at Denver International Airport ended Saturday afternoon, several hours after 350 workers walked off the job site to protest their wages and stalled contract negotiations. The workers had been negotiating with DIA's contractor, Flagship Facility Services, for three months. The last contract expired Sept. 30, and janitors held a one-day strike on Oct. 1.

Janitors will be returning to work as early as tonight, said David Fernandez, spokesman for the Service Employees International Union Local 105. The janitors secured a $4 hourly raise to be rolled in over the next three years, with the bulk of that - $2.50 - coming in March, Fernandez said. The agreement quickly ends a strike that threatened to stretch into Thanksgiving week at an airport that's already among the busiest in the world.

U.S. Thanksgiving dinner cost jumps with inflation on the menu, though deals remain

The workers had the lowest wages of any workers in the airport, Fernandez said, with an hourly wage of $17. The contract still needs to be ratified by the membership, but the action has ended and picketers have left the airport.

The vote to ratify the agreement "will be happening within the next week," Fernandez said. "But with the victories they won, the membership was very happy with the results of the agreement.

In addition to the raise, the contract also includes "workload protections and increased time off," the union said in a statement late Saturday afternoon.

“I’m deeply proud of our members for joining together, being tenacious, and staying unified," Ron Ruggiero, the president of the union's local, said in a statement. “They fought together for a contract that treated them like the heroes they’ve been called for almost two years. This contract isn’t just good for janitors, it’s good for all airport workers. Together, these janitors are fighting to raise the standard and make a better airport for everyone.”

"We are pleased that SEIU and Flagship have reached an agreement and thank both parties for their efforts and partnership to develop an equitable solution for our janitors," DIA CEO Phil Washington said in a companion statement. "The janitorial staff is an important part of DEN, and we thank them for their hard work."

A message sent to Flagship on Saturday morning was not returned.

Fernandez said both DIA and Flagship knew the strike was coming and that mediation had been scheduled to begin Saturday morning at 8, after the strike began. He said representatives from the airport observed the mediation "to make sure the negotiations were going well." He said to his knowledge, no one from DIA had previously sat in on contract negotiations.

Union members had lobbied the city council and held other public actions to raise awareness of their position, Fernandez said.

When it announced the strike Saturday, the union said the action was a "last resort" after negotiations had stalled. It accused Flagship of "unfair labor practices and a lack of fair compromises on wages and workloads." The company's last contract offer before the strike, the local wrote, was below inflation, which the union said amounted to a pay cut.

“We’re on strike for fair wages and workloads,” said DIA janitor Luis Gonzalez said in the announcement. “We keep this place running, we put ourselves at risk every day, and we deserve to be able to put food on the table for the holidays."

The mayor of Aurora and five current or soon-to-be members of its council have asked the city manager not to enforce an indoor mask mandate instituted by Tri-County Health because the agency doesn't have authority over the entire city.