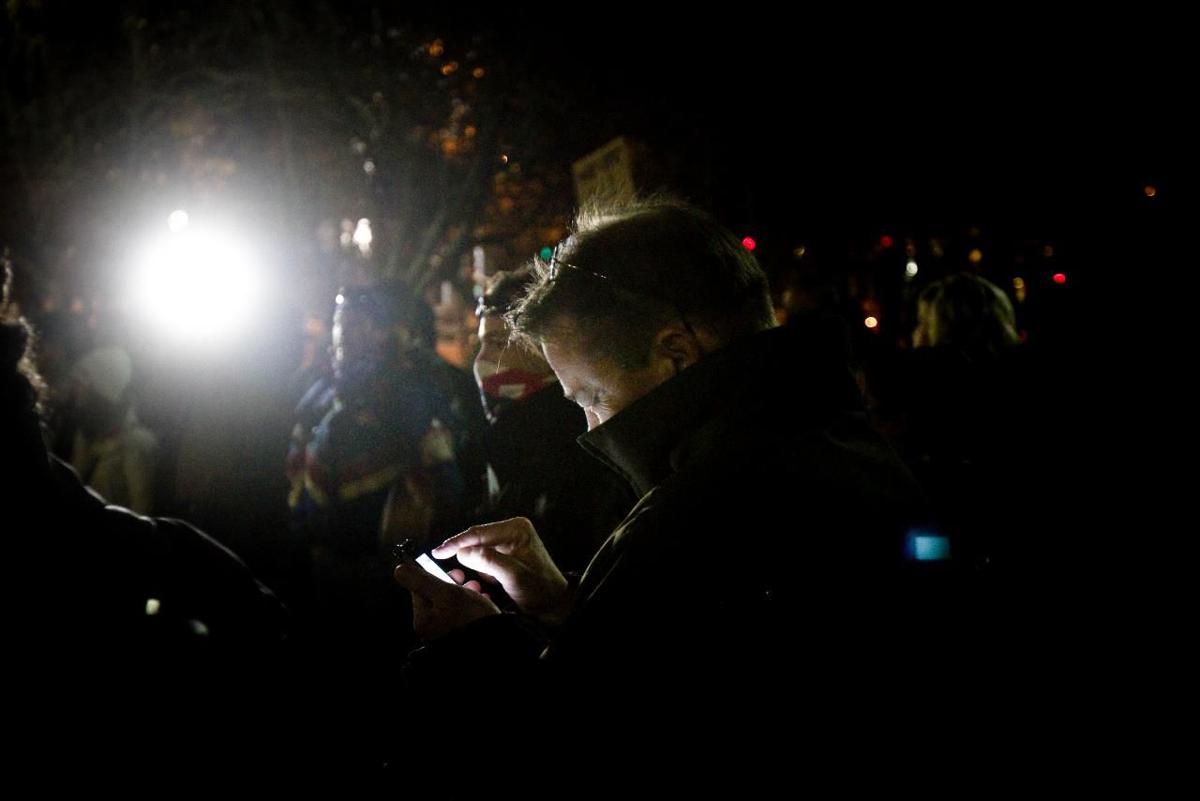 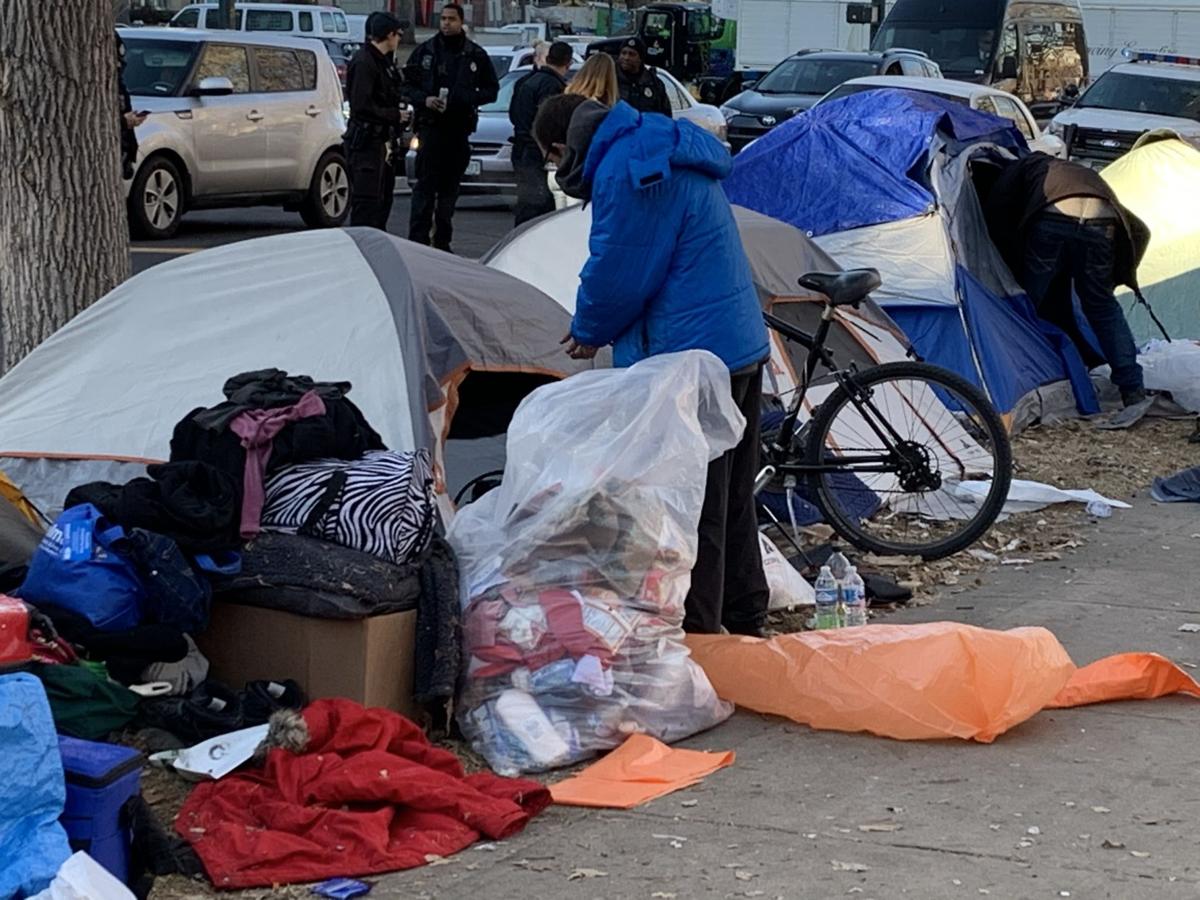 Debris and belongings line the street on jan. 15, 2020, at Denver's Liberty Park near the state Capitol after a weeklong homeless encampment, while the city's urban camping ban is in legal limbo.

Debris and belongings line the street on jan. 15, 2020, at Denver's Liberty Park near the state Capitol after a weeklong homeless encampment, while the city's urban camping ban is in legal limbo.

There are two kinds of shoes on Denver’s 16th Street Mall. I’ve walked in both, even if the beaten shoes of the homeless were just for pretend and just for three days. The public's judgment and my tired bones felt real enough.

It was the record blizzard in March 2003. I was months out of Mississippi, and, sure, I thought it would be insightful to live on the streets for the 32-inch storm to tell a story you can't tell from a comfortable point of view. It’s not the snow I remember most.

I dress nice, OK, almost always a suit. (Blazers are for frat boys, Kiwanians and guys named Stu.) I’m dressed for business, therefore I mean business, I believe, when I strap up in a necktie. When you smell of days and you’re carrying your stuff in a garbage bag, you know people see you as less-than when you walk in a store from the cold, and that aches as much as your feet. The high and mighty should walk that road.

One night, I tried to sleep by the Rock Bottom Brewery, because I thought it would sound good in my story. I was only half asleep, because you never really sleep, when a Denver cop kicked my sleeping bag and told me to move along. I didn’t bother to tell him I was a new reporter in town trying to make a name for myself. I didn’t have the energy. I just moved on to the 15th Street underpass. A dry, safe place to sleep is hard to find.

I think of that night when I think of Denver’s urban camping ban, which gives cops the authority to write a ticket or even jail a person who won’t go to a shelter.

That’s not the whole story.

Councilwoman Candi CdeBaca wants to repeal the ordinance outright, citing the judge’s ruling and calling it “cruel and unusual,” from the Eighth Amendment of the U.S. Constitution.

The homeless people began camping along the perimeter of the park last week, as the Legislature resumed.

Presumably, CdeBaca saw them, but is she also hearing her city’s voters? I doesn't seem so. More than 81% voted against a repeal just last summer.

The mayor's race was punctuated by the issue.

At the statehouse, I covered hours and hours of testimony in three sessions, as former Rep. Joe Salazar, a civil rights attorney and a man of bottomless compassion for the downtrodden, tried repeatedly to pass a Colorado Right to Rest Act to strike down urban camping bans across the state.

Denver wanders on aimlessly in a vast expanse of good intentions on both sides, where all or nothing are the only two choices we're presented in the law: strict enforcement or anything goes. I couldn't tell you why everything in between fails, but it does. I know it first-hand.

Maybe it's that real solutions are expensive and involve things like meaningful investments in mental health, especially for people with nothing who often refuse to accept it.

The city has worked hard to lure tourists and conventions downtown. A cause that lacks political correctness is curbing aggressive panhandlers — many of whom are nowhere near homeless but rather criminal jerks — and people in need of mental health care.

Denver says they’re not rolling or roughing up anyone; the point is to get them off the streets and into care, if they can.

The urban camping ban has been around since 2012. I remember vividly how we got there.

Almost every night during the Occupy Denver movement in the last months of 2011 I reported from the frontlines of the protest. Twice I was shoved around, once by a homeless man who had been drinking and once by a cop in riot gear in Civic Center park. Protesters there, mostly young people, smoked pot without concern, played music, ate the free food provided by allies and left the human waste on the ground, my shoes could attest.

Then-Gov. John Hickenlooper, now a Democratic U.S. Senate hopeful, was the first state official to issue an order to evict Occupiers in mid-October during a sprawling national protest over the control exerted by the nation’s richest 1%.

It was after midnight when the cops showed up in black riot gear, flashing lights and a PA that announced, “This park is closed until further notice.” Twenty-four protesters were arrested that night, but as disbursements go, well, people disbursed.

Two months later the riot cops came back. This time the protesters were ready. On a night I still remember as painfully cold, I watched nervously as cops advanced on the protesters down Broadway like a military flank. A young man near me lit a pizza box from a garbage can fire, then set ablaze the blankets for about 30 yards along the sidewalk. I scrambled away in the smoke with the others, rather than wait around to explain I was a reporter who shouldn't be there.

Denver's Occupy movement fell apart completely soon after. On Christmas, Hickenlooper and Mayor Michael Hancock tried to carry on the tradition of reading the names of those who died on the streets that year on the steps of the City and County Building. Occupy knuckleheads shouted them down, and any nobility left in the movement was lost to the disproportionate lack of civility for their own cause.

People stopped showing up at the park about then, and the next May, the Denver City Council passed the urban camping ban, 9-4.

The damage to the park and the reputation of the homeless had been done. The people hurt most by the politics were the people the movement was meant to help. Ain’t that the way it so often goes, as the politicos go on to the next talking point. Now they're back talking again.

If this is what living with the homelessness feels like, then this is no way to live, Denver.

INSIGHTS | A compilation of the best columns from Joey Bunch

It's a snowy day, so curl up with a hot drink and peruse some of senior reporter Joey Bunch's best columns from the year 2020 to today.

"You delivered," Gov. Jared Polis said to those assembled online for the bill signing. "Working together, our state is making enormous progress to put patients first, ahead of the bureaucracy."

Polis briefed by HUD secretary on Colorado's aid for the homeless

Joey Bunch: "The dump trucks of money left on the doorstep of homelessness in metro Denver could build a lot more houses."