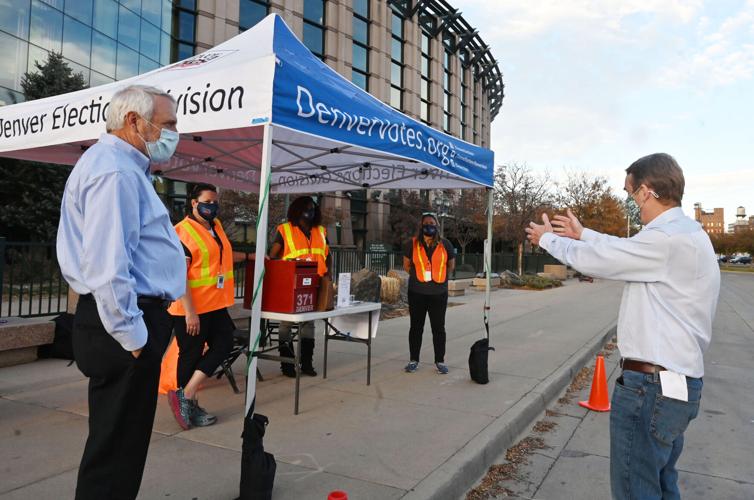 Sen. Michael Bennet (right) gives an air hug to election workers as he was visiting the Ball Arena on Election Day in Denver on Tuesday, Nov. 3. 2020. Bennet and former Colorado Gov. Bill Ritter (left) were making the rounds to visit polling centers to visit with poll workers. (Photo by Jerilee Bennett, The Gazette)

Political strategists Steve Welchert, left, and Dick Wadhams broke down the state of play for Colorado politics in a web forum on Dec. 14, 2020, with the University of Denver's Korbel School of International Students at the Crossley Center for Public Opinion Research.

It was less than two decades ago when it seemingly took Dick Wadhams 45 minutes to call out Jefferson County's elected Republicans at a Lincoln Day Dinner.

Now, only Sheriff Jeff Shrader and state Rep. Colin Larson, a moderate from Littleton, are left to turn off the lights, when the grand old party is finally over.
2020-election

Back when they were at their zenith, Colorado Republicans could count on a few things.

Arapahoe and Jefferson counties were the bellwether swing counties, while El Paso and Douglas counties were conservative population centers where the GOP could run up the score against Democrats in Denver and Boulder.

Donald Trump lost Jefferson County by 19 percentage points and Arapahoe County by 25 this year. He won El Paso and Douglas counties with 53% and 52%, respectively.

INSIGHTS | After Trump and #copolitics, it’s time to quit Twitter

He lost Colorado by 13.5 points, while U.S. Sen. Cory Gardner lost to former Gov. John Hickenlooper by 9 to complete the double drubbing for the GOP. The state House and Senate, unsurprisingly, stayed in the clutches of the Democrats.

That year Bill Owens was reelected governor in a landslide, and both of Colorado's U.S. senators were Republicans, as were five of the seven House members. The secretary of state and state treasurer hailed from the GOP, along with the majorities in the state House and Senate. Ken Salazar, then the attorney general, was the lonely Democrat atop state government. Things looked bleak.

Democrats put in the work and the money while their kind of voters streamed into Colorado.

These days Colorado is just plain blue, said Steve Welchert, a Democratic consultant who puts the A-plus in political analyst.

“Not purple, not periwinkle, not powder blue,” he explained in the Dec. 14 Zoom chat with friends of the University of Denver and a handful of us politicos.

The problem shows up in the math.

Registered Republicans trail registered Democrats by nearly 81,000 voters to begin with, but unaffiliated voters are the state's largest bloc with 39%.

"The power of the unaffiliated voter cannot be denied," Ciruli declared, noting unaffiliated voters overwhelmingly requested Democratic primary ballots this year. Welchert characterized most of them as "closet Democrats."

Wadhams doesn't think it's all ideology. The remedy he prescribes for his beloved GOP is to find better candidates.

In the 10 elections for governor or U.S. senator since 2002, Republicans have won only one, when Gardner unseated Mark Udall six years ago.

"As long as we nominate bad candidates, we're never going to win an election," Wadhams said.

Things can change fast in politics, if Republicans are up to the task.

If Hillary Clinton had won four years ago, Gardner might have had a shot at reelection, if Democratic baggage had been at issue. Trump brought more baggage than a Greyhound bus.

He was at the top of the ticket, but he also was up and down it, as well.

In the 2022 midterm election, Coloradans will be voting on a Democratic White House, which could complicate reelection prospects for Sen. Michael Bennet.

Democrats maintained a commanding majority in the House, 41-24, in November, but they didn’t pick up any seats there and just one in the Senate in what was expected to be a blue wave. A plateau usually precedes a decline.

Independent commissions for the first time will redraw legislative and congressional districts next year. If the commission favors competition over partisan certainty, newly competitive districts could shift the balance of power in the statehouse.

Barring seismic blunders or Republicans getting their act together, he has a better chance of losing the Democratic primary in two years than he does the general election. Remind me then if I’m wrong. I won’t be.

Polis can write himself a $20 million check, whenever he feels like it. And that’s the starting point of his fundraising juggernaut. He has a proven political machine and the free spotlight of incumbency. All he can do is mess up a sure thing.

Republicans need younger candidates speaking to younger voters' beliefs and needs, rather than wait for 18-year-olds to care about tax cuts. You open the door talking about student debt, not trade policy and culture wars.

The Colorado GOP has that talent.

That talent is also smart enough to realize timing is everything. They'll need some convincing that now isn’t the time to burn up their political capital against a juggernaut; the seat will be open in 2026.

Joey Bunch: "Colorado Democrats have their own problems, including a splintering party. Last year, a handful of qualified women of color were in the primary for U.S. Senate. None got traction, and ultimately the party oversaw the race as it dwindled down to two white guys."

Joey Bunch: "Of all the big-shot politicians, operatives and wonks I’ve known, Doug is the highest ranked one whose personal cell phone number I possess, and he’s the first big shot in Colorado who ever told me anything newsworthy."

INSIGHTS | Is Lauren Boebert a danger to Democrats … or Republicans?

Joey Bunch: "Guns won’t keep a drop of water on the Western Slope or keep the oil and gas industry alive."

INSIGHTS | Polis takes a shot at defeating himself next year

Joey Bunch: "The first gentleman, Marlon Reis, not-yet-40 and spry as an athlete, found his way to the front of the essential worker line for a COVID-19 vaccination this month ... I haven’t heard anybody yet tell me this was a good idea. They also don’t want to anger the governor by calling him out publicly, which is why I get the phone calls urging me to do it."

Ken Salazar rumored to be up for ambassador to Mexico

The Biden administration is considering the former senator from Colorado (and Obama Cabinet member) Ken Salazar as ambassador to Mexico, according to Axios national reporter Hans Nichols, co-author of the weekly Sneak Peek newsletter.

Joey Bunch: "Let me see if I have this straight: Politicians like some more reporters more than others. In other news, birthdays come with cake. Twitter hyperventilated over it for a couple of days, but Twitter is a dank coal mine of unimportant thoughts."

Joey Bunch: "You can say about Jared Polis on a lot. Trust me, I have. The one thing you must say is he’s Colorado's best baseball governor, just as it’s hard to deny John Hickenlooper was the best beer governor."

Heidi Ganahl to make political announcement, but for what?

As Colorado's only Republican statewide officeholder, Heidi Ganahl is widely speculated to be the consensus GOP candidate to take on incumbent Gov. Jared Polis, who is seeking a second term next year.

Republican Heidi Ganahl will kick off her Colorado gubernatorial campaign with a seven-day state tour starting Tuesday in Monument, followed b…

“Our experienced campaign team will tell the story of our work to deliver for all Coloradans," Bennet said in a statement.