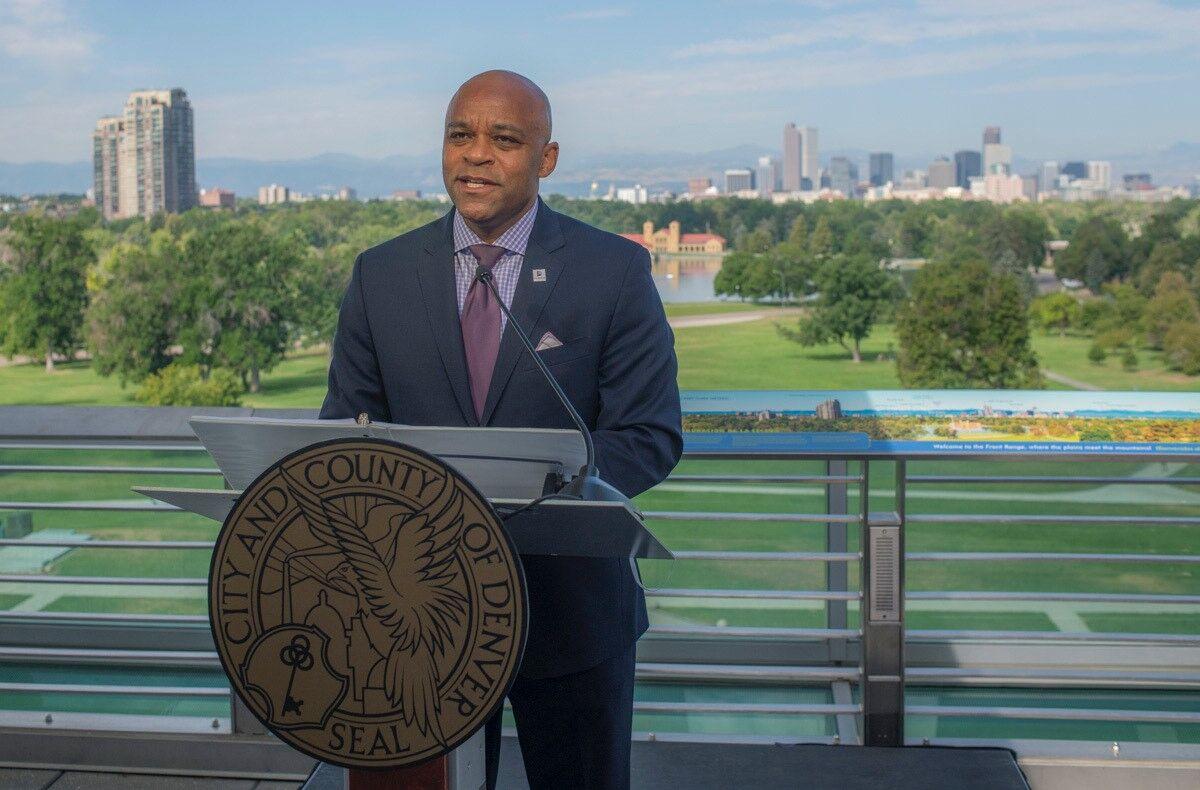 Denver Mayor Michael Hancock delivers the annual State of the City address on the balcony of the Denver Museum of Nature and Science on July 27, 2020. 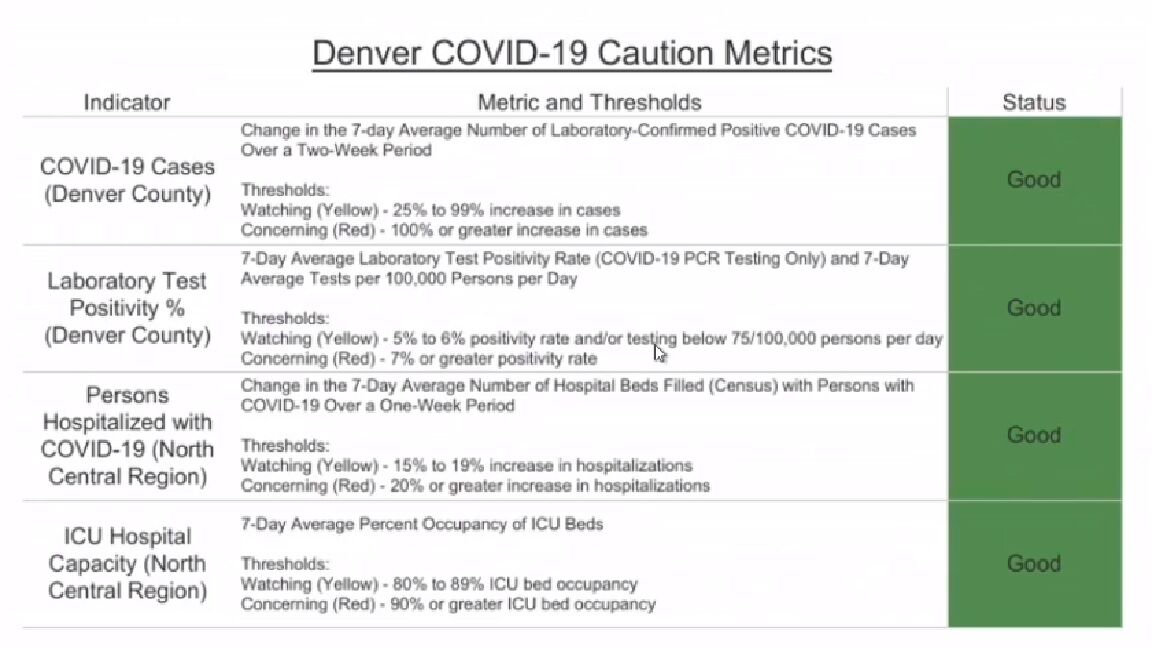 A graphic from the Denver Department of Public Health and Environment about COVID-19 caution metrics, presented on July 31, 2020.

Denver Mayor Michael Hancock delivers the annual State of the City address on the balcony of the Denver Museum of Nature and Science on July 27, 2020.

A graphic from the Denver Department of Public Health and Environment about COVID-19 caution metrics, presented on July 31, 2020.

Denver Mayor Michael Hancock’s administration defended on Friday the handling of the city’s coronavirus response for individuals experiencing homelessness, and revealed that it would take a doubling of citywide infections over a two-week period for things to be deemed “concerning.”

“We have a balancing act that we have to achieve here and we have to not only take care of and protect those who are in the encampments, but we have to protect and keep safe the general public,” Hancock said.

On Wednesday, police officers assisted in the clearing of Lincoln Park near the Capitol after the city’s Department of Public Health and Environment deemed it to have “significant public and environmental health risks.” The temporary restriction on encampments resulted in the removal of reportedly 75 to 100 people from the park.

“If the department determines that it’s reached that point [for] any of these encampments where there’s an imminent public health risk, there is not a requirement to post notice and move immediately,” DPHE executive director Bob McDonald said of the procedure for evacuations generally.

Hancock listed a number of harms that arise from the encampments, including “hep A, you’ve got COVID, you’ve got rat infestations, you've got needles that are haphazardly around.” He also mentioned assaults and other violence.

When asked why he could not speak to a timeline for the cleanup of Morey Middle School in central Denver, where people have settled along its perimeter, the mayor laid blame on protesters and their allies on City Council.

“We have people who want to put our public health workers ... and our law enforcement officers in danger by tipping off folks who want to come in and escalate the situation,” Hancock said. “We know for a fact there is a city council member who is texting and sending out information, trying to get people to show up at protests. It’s putting everyone at risk.”

He did not mention the council member by name, but early on Wednesday morning Councilwoman Candi CdeBaca, an critic of the mayor at times, tweeted about the operation. She later wrote on Facebook that "I am so disgusted and sorry that this is happening under our watch. I don't know how to open these so-called leaders' eyes to the pain and destruction our most vulnerable amongst us are experiencing. I am open to ideas about what we can do together to leverage our collective power."

Councilman Paul Kashmann, the chair of the safety committee, said after Hancock's press conference that “The only reason I have been given for the sweeps is to be protective of public health.”

Britta Fisher, the city’s chief housing officer, maintained that “our shelters are safe” during the pandemic. She said a survey of people residing at the National Western Complex found that 16% of respondents were unhoused before they came to the facility.

“That environment, with good meals, assigned beds, plenty of space, has attracted people who were formerly sleeping outside to come inside and seek services,” Fisher said.

Also during Hancock’s press conference, the administration said that COVID-19 caseloads were increasing. The seven-day average of new daily cases was 72.3 as of July 17. By July 30, it had risen by nearly one-quarter to 89.7.

However, a graphic that McDonald presented labeled a seven-day doubling of cases during a two-week span as “concerning,” while a 25% to 99% increase only merited “watching” status. Denver has had the greatest number of infections of any Colorado county since the pandemic began, currently in excess of 9,500. The city lists itself in the “green” zone for infections, percentage of positive tests, hospitalizations and intensive care unit capacity.

Although other cities and states are having success with suppressing COVID-19 cases — Toronto, North America’s fourth-largest city, had only one new reported case on Monday — McDonald said that it would take a doubling of cases for Denver to be “on our way to having serious conversations about closing things back up.”

He later clarified that the city is still concerned about the infection levels Denver is seeing, and that the easy spread of the virus will always merit worry. If the city being in the green zone implies that the status quo is fine, he said, “that’s not really what that means.” McDonald added that the city is looking to shift testing to smaller, community locations.

Hancock emphasized that “while it’s going to be the perfect weekend to be out” in Denver, “wearing your mask or face covering when you’re out in public is not a political statement.” The city issued approximately two dozen citations for violations of public health orders in recent weeks, most of which pertained to mask usage, he said.

The Colorado National Guard announced on Thursday that it had assisted with testing 20,000 individuals for COVID-19 to date, with a presence in 28 counties and 34 cities.