As one group of tenants’ advocates has filed a ballot initiative to fund legal representation for Denver renters facing eviction, two city council members plan to introduce a similar proposal through the legislative process.

Councilwomen Candi CdeBaca and Amanda Sawyer solicited feedback at a virtual town hall meeting on Friday, and expect to unveil the legislation at a second event on April 9.

But No Eviction Without Representation Denver, a project that grew out of the local Democratic Socialists of America chapter, has already filed an initiated ordinance with the Denver Clerk and Recorder’s Office to establish that right through the ballot box. 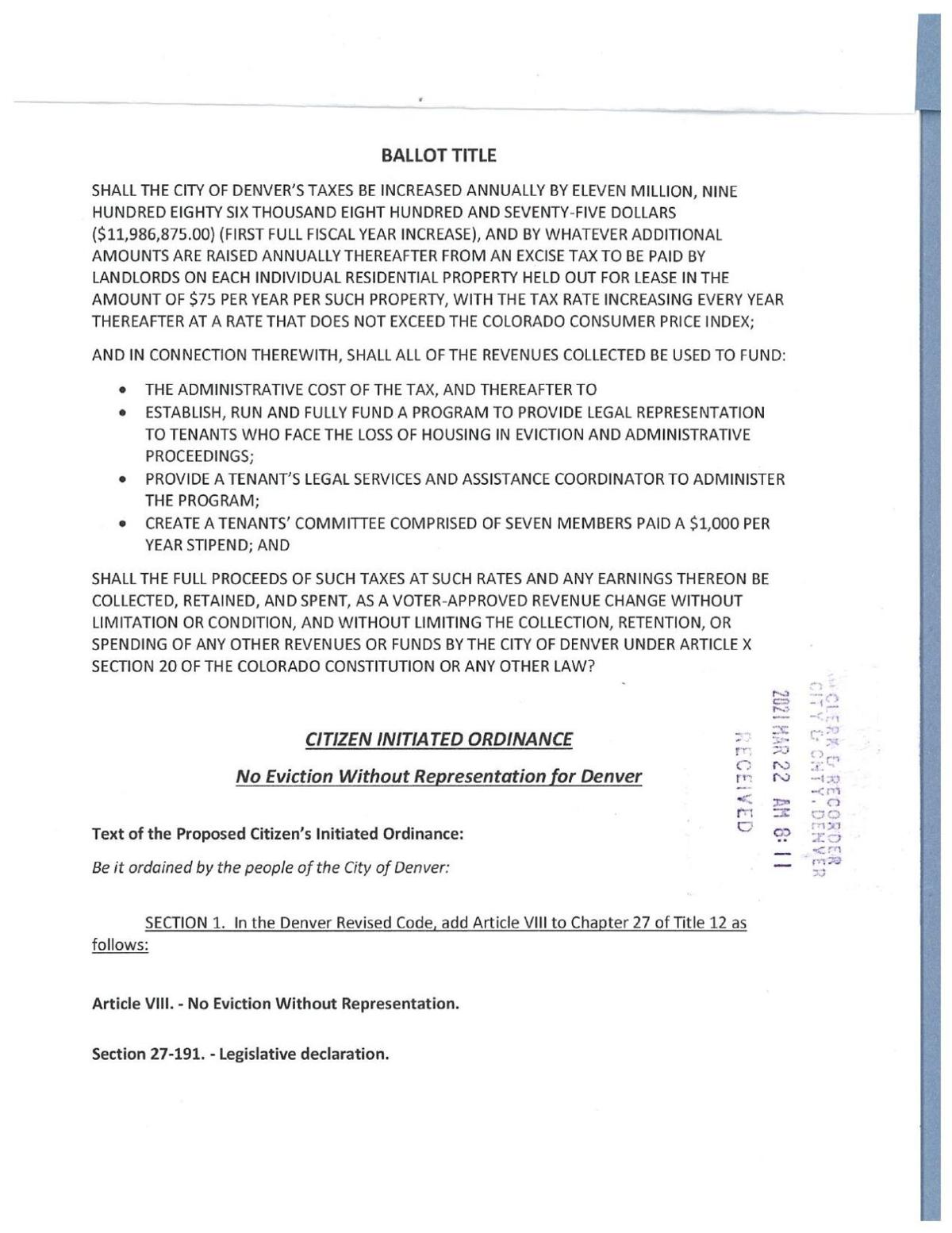 Under the initiative, taxes would increase by approximately $12 million annually through a $75 assessment imposed on landlords for each residential unit for lease. In exchange, the city would institute a program to provide legal representation to all tenants facing eviction – to the greatest extent possible.

"We want to make sure that anyone facing eviction has effective representation, and that means full-scope representation. So five years down the line, someone who is seeing a notice to vacate on their door is automatically provided information about who to contact if they would like to have assistance navigating that, and that person is available to help from start to finish," Ruby Pierce of NEWR Denver told Colorado Politics.

An eviction — known formally as a forcible entry and detainer — is the legal removal of a tenant from the owner’s property. Eviction Lab, a project at Princeton University, found that in 2016, there were a total of 7,600 eviction filings in Denver, with a rate of nearly 9.8 evictions per day. Failing to pay rent or violating conditions of a lease are among the typical grounds for an eviction.

An eviction does not include when a tenant leaves voluntarily after receiving a notice to pay or vacate (or simply a notice to vacate) from the landlord. An informal survey that CdeBaca and Sawyer conducted among a small sample of renters and landlords found most tenants who faced eviction reported “self-evicting” rather than appearing in court.

However, the possible reason for that choice undergirds the motivation for the eviction defense proposals: in legal proceedings, landlords almost always have an attorney. Tenants almost never do.

Statistics suggest that legal representation does make a difference in the outcome of cases. A 2017 study from the Colorado Coalition for the Homeless and the Colorado Center on Law and Policy found Denver renters in privately-owned units faced a successful eviction rate of around 68%. Among the much smaller population of renters with lawyers, between zero and 14% ended up with an order to leave.

“If the industry was behaving equitably we would not need the protections in the first place,” said Benjamin Dunning of Denver Homeless Out Loud, who added that his group supports the proposed initiated ordinance.

A stated goal of both the initiated ordinance and the anticipated council version is to stave off homelessness, and therefore cut down on the money expended to assist those experiencing it.

"The cost of this program really pales in comparison to the benefits," said Pierce of NEWR Denver, whose day job is with Warren Village, a program that provides affordable housing to low-income, single-parent families in Denver.

CdeBaca, who found the long-term consequences of eviction include financial dependence on others, an inability to rent in one's own name afterward and homelessness, likewise emphasized the prevention over the cure.

Those ill effects represent "tens of millions, in some cases hundreds of millions of dollars in taxpayer money that we are spending to solve a problem that we might be actually be able to spend a little bit of money on the front end to prevent," she said during the virtual town hall meeting.

NEWR Denver patterned its initiated ordinance after Ballot Issue 2B in the city of Boulder, which nearly 59% of voters approved last year. While the logistics are the same, the amount of annual revenue raised — $1.9 million in Boulder – is substantially less than the 160,000 rental units in Denver would generate.

Councilwoman Jamie Torres worried about using Boulder’s ordinance as a template for Colorado’s largest city without an evaluation beforehand.

“I have been supportive of my colleagues, Councilwomen CdeBaca and Sawyer, in their thoughtful attempts to go at this same subject though an informed process, like gathering Denver-based data and gathering Denver resident input and really trying to identify how something like this could be set up and successful,” she said.

The initiated ordinance does include a data-collection component, but it is a report-as-you-go system. Every year by Sept. 1, a coordinator will submit a review to the mayor and council that tallies the number of people who experienced an eviction, the number receiving representation and the demographic characteristics of each person, among other pieces of information. A tenants’ committee of renters would oversee the eviction defense program.

In a statement, the Colorado Apartment Association, which has more than 3,000 members that manage 300,000 apartment homes across the state, called the initiated ordinance flawed, given that federal COVID-19 relief money has already included rental assistance to counteract the economic turmoil of the pandemic.

“There are two fundamental issues with the proposal: the money will fund lawsuits, not support residents in paying rent, and the funding source that is at the root of keeping people in their homes comes from the rental housing provider, instead of society as a whole,” said Drew Hamrick, general counsel and senior vice president of government affairs for the association. “Right now, the best use of money to help people maintain housing is emergency rental assistance.”

NEWR Denver responded to Hamrick’s claims by pointing out his opposition to a federal eviction moratorium last year, and clarifying that the landlord, not the tenant, initiates the legal action.

“These programs are temporary,” the organization said, referencing the pandemic rental relief. “Denver’s affordable housing and eviction crises are not, as Denverites well know. Denverites refuse to return to a status quo where thousands are subject to displacement without a fair hearing in court.”

New York City enacted a right-to-counsel program in 2017, in a jurisdiction where 70% of households rent. The city's Office of Civil Justice found that by the middle of fiscal year 2020, 38% of renters were represented by attorneys in eviction cases, compared to 1% in 2013.

"At the same time that access to quality legal assistance for tenants has been increasing, the number of New Yorkers being evicted from their homes has been on the decline," the office reported. "Residential evictions by New York City marshals — which once numbered almost 29,000 per year — have declined by approximately 41% since 2013."

New York's program, which phased in by ZIP code, is intended to cover the entire city in 2022. Some housing advocates warn, however, that the goal of such a program should not be merely to prevent evictions, but to improve housing stability overall.

Colorado's Special Eviction Prevention Task Force, which issued a report in October of last year, echoed that view by listing the circumstances that make some tenants inherently more vulnerable to staying housed — including low-wage employment, a criminal background, discrimination or being undocumented.

One finding of CdeBaca's survey of 147 landlords was that 53% actually preferred mediation to resolve tenant issues, whereas fewer than four in 10 wanted to go to court. (The state task force also recommended tele-mediation in addition to legal defense as solutions to eviction.) NEWR Denver's initiated ordinance would cover such alternatives.

"The idea is to help in facilitating tenant-landlord relationships, and this initiative would increase the likelihood of an agreeable outcome for both parties, like a payment agreement that helps a small landlord stay solvent," said Anish Advani, also with NEWR Denver. "We're not just looking at the tenant perspective."

In 2018, the Denver city council funded a similar $131,500 pilot program to provide legal eviction assistance. Then last week, Denver’s Department of Housing Stability requested proposals to address eviction defense and prevention through at least December, given an "increased risk" due to the pandemic. Data that CdeBaca compiled listed 9,249 eviction filings in Denver in 2019, and 3,912 in 2020. Those numbers existed despite federal and state policies encouraging a halt to evictions during the public health emergency.

Cathy Alderman, the chief communications and public policy officer for the Colorado Coalition for the Homeless, said her organization does not have a position on the initiated ordinance, and in particular wants to know how the annual tax would affect nonprofit housing providers. But in general, the coalition supports the underlying concept.

"We do believe renters need eviction protections and legal defense, and that is the right way to balance the scales," Alderman said. "I’m also really interested to know how this works with some of the other proposals out there.”

Besides CdeBaca and Sawyer's planned ordinance, council President Stacie Gilmore is pushing for a registry that would enumerate and license parcels of land with rental units.

Beyond the practical necessities of collecting data, reducing expenditures and preventing homelessness, the idea of eviction defense also taps into the legal ideal of the "civil Gideon" movement. Named for the 1963 U.S. Supreme Court decision of Gideon v. Wainwright, in which the justices determined anyone accused of a state crime had a right to an attorney, "civil Gideon" champions seek to expand that right to high-stakes civil cases. NEWR Denver's initiated ordinance even cites the landmark case in its introduction.

"When we see a huge disconnect between the percentage of renters that are evicted without representation versus those that do have counsel, it's evident that representation is the only way to ensure that's not the case," Advani said.