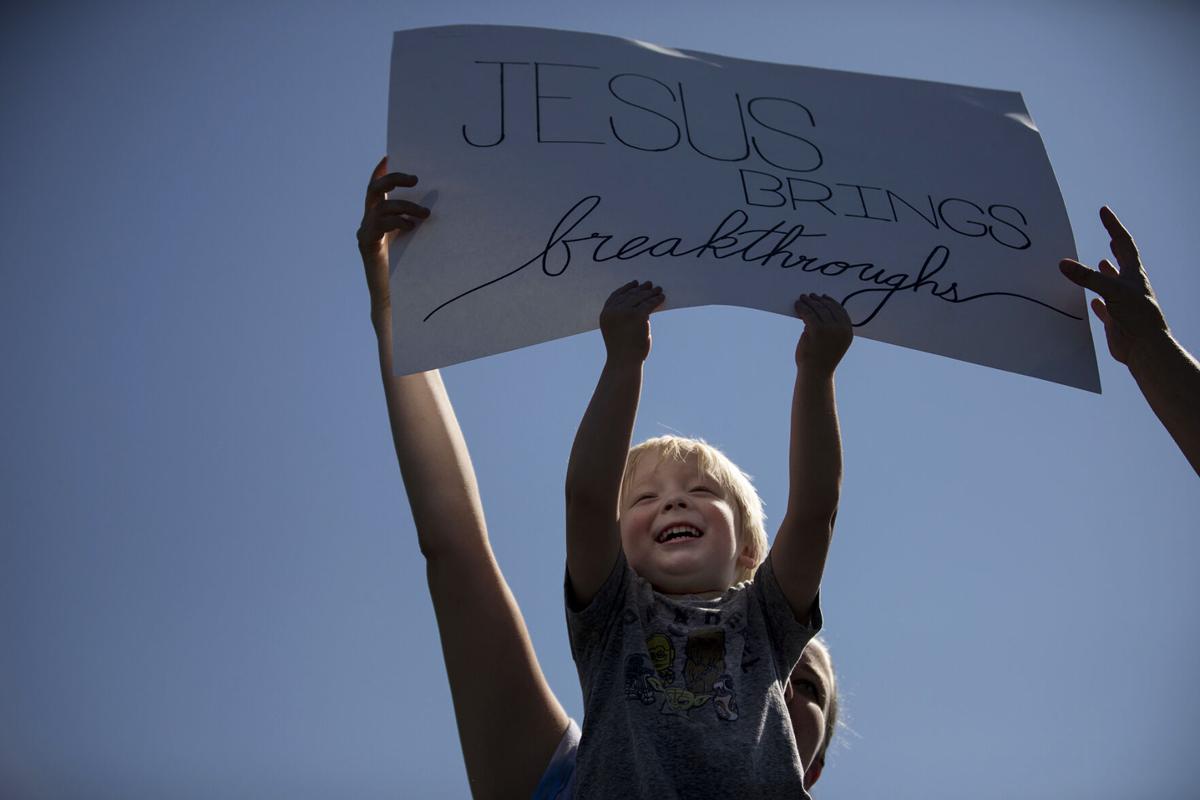 Bentley Cobler, 3, sits on his mother Megan Lucken's shoulders during the "Let Us Worship" community event at Memorial Park in Colorado Springs, Colo., on Saturday, Sept. 12, 2020. Dr. Steve Holt, senior pastor of The Road at Chapel Hills Church, coordinated the event. Worship leader Sean Feucht lead the "peaceful protest and worship," with other participating pastors, with an estimated over two thousand people in attendance. The event was held to promote peace and unity in Colorado Springs. The prayer rally was mask-optional. (Chancey Bush/ The Gazette) 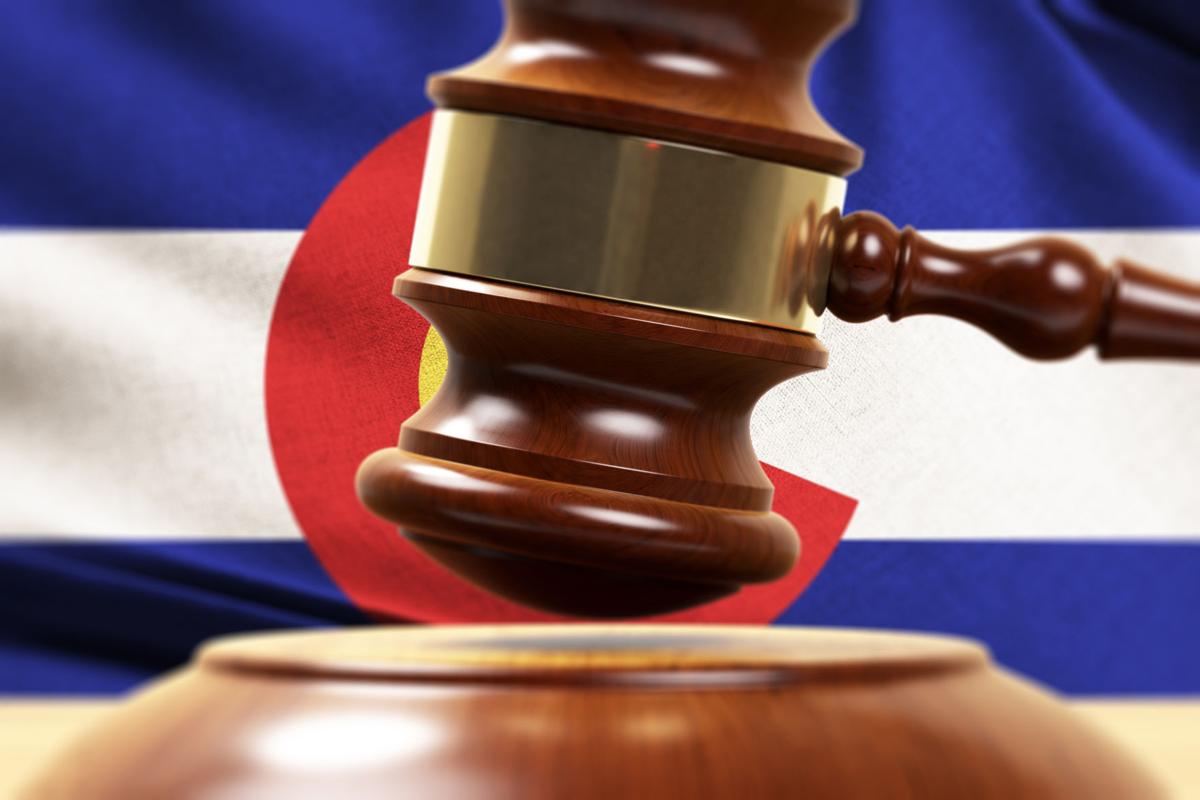 Bentley Cobler, 3, sits on his mother Megan Lucken's shoulders during the "Let Us Worship" community event at Memorial Park in Colorado Springs, Colo., on Saturday, Sept. 12, 2020. Dr. Steve Holt, senior pastor of The Road at Chapel Hills Church, coordinated the event. Worship leader Sean Feucht lead the "peaceful protest and worship," with other participating pastors, with an estimated over two thousand people in attendance. The event was held to promote peace and unity in Colorado Springs. The prayer rally was mask-optional. (Chancey Bush/ The Gazette)

A federal judge has exempted two churches from the state's mandate on wearing masks indoors and cap on the number of people at indoor gatherings, public health orders intended to slow the spread of the coronavirus, but seen by some as discrimination and a violation of First Amendment guarantees of religious freedom.

In August, Denver Bible Church in Wheat Ridge and Community Baptist Church in Brighton filed a complaint challenging state health orders as being void due to their vagueness and infringements upon religious freedom. The churches also alleged that the health orders “restrict or prevent religious speech" based on "how closely plaintiff pastors can be to persons in their congregations, and in how closely congregants can be to each other, to meet, pray, talk, stand, sit, walk, sing, pray, embrace, shake hands, smile or facially express their thoughts, opinions and emotions.”

In an order issued on Oct. 15, U.S. District Judge Daniel D. Domenico said he didn't believe the plaintiffs would succeed at trial in proving the majority of their claims against the government, but did grant a temporary restraining order preventing the state from enforcing the face covering mandate and capacity limits against the two churches.

“The court does not doubt that the state made these decisions in good faith, in an effort to balance the benefits of more public interaction against the added risk that inheres in it,” Domenico wrote. “But the Constitution does not allow the state to tell a congregation how large it can be when comparable secular gatherings are not so limited, or to tell a congregation that its reason for wishing to remove facial coverings is less important than a restaurant’s or spa’s.”

The crux of the judge’s ruling is that Gov. Jared Polis' public health order treats houses of worship differently than secular establishments, such as public schools, and essential businesses, including Walmart and Amazon warehouses, or meat-packing plants, that pose an equal risk of spreading COVID-19. The decision comes as COVID-19 cases are spiking in many counties statewide, with Polis issuing a warning this week that continued increases could lead to more severe restrictions on daily life.

Whether the churches will prevail is up to the 10th Circuit Court of Appeals. The Colorado Attorney General’s Office on Monday filed an emergency motion for a stay, or suspension of the injunction, pending the outcome of an appeal.

"Nothing in the state defendants’ public health orders reveals discrimination or bigotry targeted at religion," the motion states. "If anything, Colorado’s orders treat religious organizations more favorably than comparable organizations that are nonreligious. The Governor’s executive order requiring face masks in public places, for example, exempts individuals who are officiating at a religious service."

The same issues have been raised by other churches, with some saying they would neither follow the mask mandate nor the limit on congregants. Andrew Wommack Ministries in Woodland Park also sued before holding Bible and ministers conferences this summer attended by hundreds of people. The Teller County health department sought to shut down both for violating state public health orders.

"I think it's the right ruling," said the Rev. Brady Boyd, pastor of New Life Church in Colorado Springs, which has 15,000 members in seven congregations. "The vast majority of churches are going through extraordinary measures to keep people safe, and the government restrictions are not necessary."

But other religious leaders have said they can worship and protect people from a potentially deadly disease.

“Judaism teaches that pikuach nefesh — saving a life — is the highest principle. To exceed safe numbers and to not require masks is a flagrant violation of this principle,” said Rabbi Rachel Kobrin of Denver’s Congregation Rodef Shalom.

“I do not see these decisions as political or that the state of Colorado is trying to stifle us,” said the Rev. Ronald Patrick Raab, pastor of Sacred Heart Parish in Colorado Springs. His church conducts eight Masses per weekend with 50 people each, per state guidelines.

The Right Rev. Rev. Kimberly D. Lucas of the Episcopal Church in Colorado, saw no tension between the government's COVID-19 restrictions and the spiritual duties of her congregation.

"I consider the governor's orders, which are based on scientific evidence regarding the spread of the COVID-19, the bare minimum we can do," she said. "We follow a savior that said, 'If anyone forces you to go one mile, go with them two miles.' To that end, I've asked congregations to go above and beyond the minimum: wearing masks, physical distancing, limiting time together indoors, because that is what walking in love demands."

Domenico's ruling was hailed as a victory by Mat Staver, founder of Liberty Counsel, the Florida-based nonprofit that engages in litigation related to evangelical Christian values and represented Wommack in its dispute with the county and state.

“This a major win for places of worship, the First Amendment and the people,” said Staver.

It also could negate the state and county health departments' pending lawsuit against Wommack Ministries that seeks to prevent it from holding more conferences at its Woodland Park campus, Liberty Counsel attorneys will argue at a hearing on Tuesday, Staver said.

The health departments argued that such an event put the public at great risk, citing a COVID-19 outbreak that they attributed to the family conference.

This article has been updated.

“These arguments are familiar to us. Over the last several years, multiple Colorado marijuana dispensaries have challenged the IRS’s ability to investigate and impose tax consequences upon them,” wrote U.S. District Judge Mary Beck Briscoe in an opinion issued on Tuesday. “The dispensaries have lost every time.”