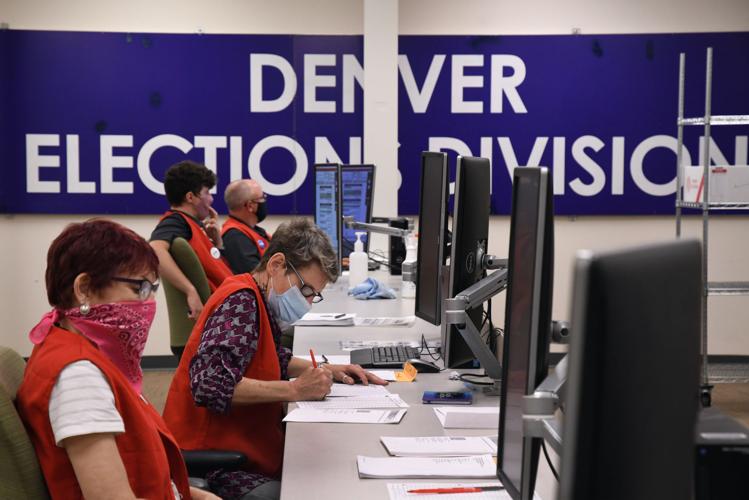 Election judges at the Denver Elections Division receive, prepare, and process ballots on June 30, 2020, in Denver. There are fewer judges working in the normally filled rooms to maintain physical distancing, and voting stations are cleaned continuously as a precaution due to COVID-19.

Election judges at the Denver Elections Division receive, prepare, and process ballots on June 30, 2020, in Denver. There are fewer judges working in the normally filled rooms to maintain physical distancing, and voting stations are cleaned continuously as a precaution due to COVID-19.

The Denver City Council unanimously agreed Monday night to refer an initiative to the November 2020 ballot that will ask voters if the legislative branch should be required to approve 14 key mayoral appointees.

The proposal, spearheaded by Councilwomen Amanda Sawyer of District 5 and Candi CdeBaca of District 9, would give council members the authority to approve 11 cabinet appointees, plus the sheriff, and fire and police chiefs. Because it is a change to the city’s charter, which functions likes the city’s constitution, the proposal must be approved by voters.

“If we have learned anything from the demonstrations that have happened over the murder of George Floyd and the public comment that we’ve heard in this chamber, … it’s that people of the city of Denver are crying out for more transparency and accountability,” Sawyer said when presenting her proposal during a Finance and Governance Committee hearing on June 9. “Now more than ever, we owe it to our constituents to give them a more representative government.”

In a recent interview with Colorado Politics, Mayor Michael Hancock laughed when asked if the mayor’s office has too much power.

“Here’s a better way for you to ask that question: Would these members of council be asking that question if the other person had won?”

In May, Hancock’s spokesman Mike Strott said that the proposed charter change “seems more about politics than anything else” and is “a solution in search of a problem.”

Hancock doesn’t deny there is an increasingly strained relationship between his office and the City Council, as is evidenced in part by a handful of charter changes the Council is pushing forward that chips away at his power.

Still, the mayor says the structure of the city’s executive branch makes sense for the same reason the council is pushing forward this proposal: more accountability.

In addition to Denver, Hancock listed Los Angeles, Orlando, Houston and Chicago as “cities that are working today, that you’re talking about today, and I think their governance structure has a lot to do with it. Because you know there is a person accountable for running the city. You don't have to ask who's in charge of parks, who's in charge of street lighting, safety. People know where that central government works.”

Hancock acknowledges that progress can't happen without City Council. "City Council absolutely plays a role. And I have never come in here and acted like a dictator," he said. "It's always been a collaboration.”

Starting Monday, the Council’s meetings will be held online for safety reasons.

“Following the guidance of Denver’s top health official, City Council will be conducting its meetings via a virtual platform,” said Council President Jolon Clark in a statement. “Virtual participation will allow voices to be heard while allowing for maximum safety in a time of pandemic.”

Initiative 284 would protect natural gas as a consumer choice for new or remodeled homes and businesses in Colorado. Initiative 304 would provide more information to voters about the cost of future ballot initiatives.

Ballot Measure 2C, led by Denver City Councilwoman At-Large Debbie Ortega and earned 54.8% of the vote, will give City Council the authority to hire professional services,