Denver City Councilwoman At Large Robin Kniech, the first out LGBTQ person to sit on the dais, took time at the start of the Monday evening council meeting to acknowledge the Supreme Court’s decision earlier that morning that made it illegal for an employer to fire someone for being gay or transgender.

Now is the time to "reflect on the fact that there are many people of color who are gay and transgender and experience intersecting discrimination," she said, "and that our work is connected for LGBTQ equality to racial equality. The two have to go together because we are all connected in those types of oppressions.

“It’s important to remember that the arc of history can curve towards justice, and it did today,” she continued. “It's an important moment to pause and celebrate as we continue the important work that needs to continue to make the law a reality. Because we know that the law is not the end of the journey. It's just the beginning.”

Denver Councilman Chris Hinds, who represents the Capitol Hill neighborhood, then read aloud the proclamation he sponsored, which declared June 2020 as Pride month in Denver and June 19, 2020, as The Center on Colfax Day.

“June marks the 51st anniversary of Stonewall, the beginning of the modern Lesbian, Gay, Bisexual, Transgender, and Queer rights movement, resulting in the recognition of June throughout the world and in Denver as Pride month to acknowledge and celebrate the contributions of LGBTQ members of society,” Hinds read the proclamation aloud. “The Center on Colfax has provided a strong voice for Denver’s lesbian, gay, bisexual and transgender communities for 44 years, playing a pivotal role in initiatives aimed at reducing harassment and discrimination.”

Hinds, who wore a black shirt with “Love Is Love” and a small rainbow on it, echoed Kniech in highlighting the “intersectionality” of racial justice and gay rights.

“We are all interested in equality and equity,” he said. “We all are people, after all, and we’re all looking to be treated as equals. That’s, I believe, what this is about.”

The council unanimously passed the proclamation in a 13-0 vote.

Denver's 45th annual PrideFest will be held virtually this year, on June 20 and 21, due to the coronavirus. 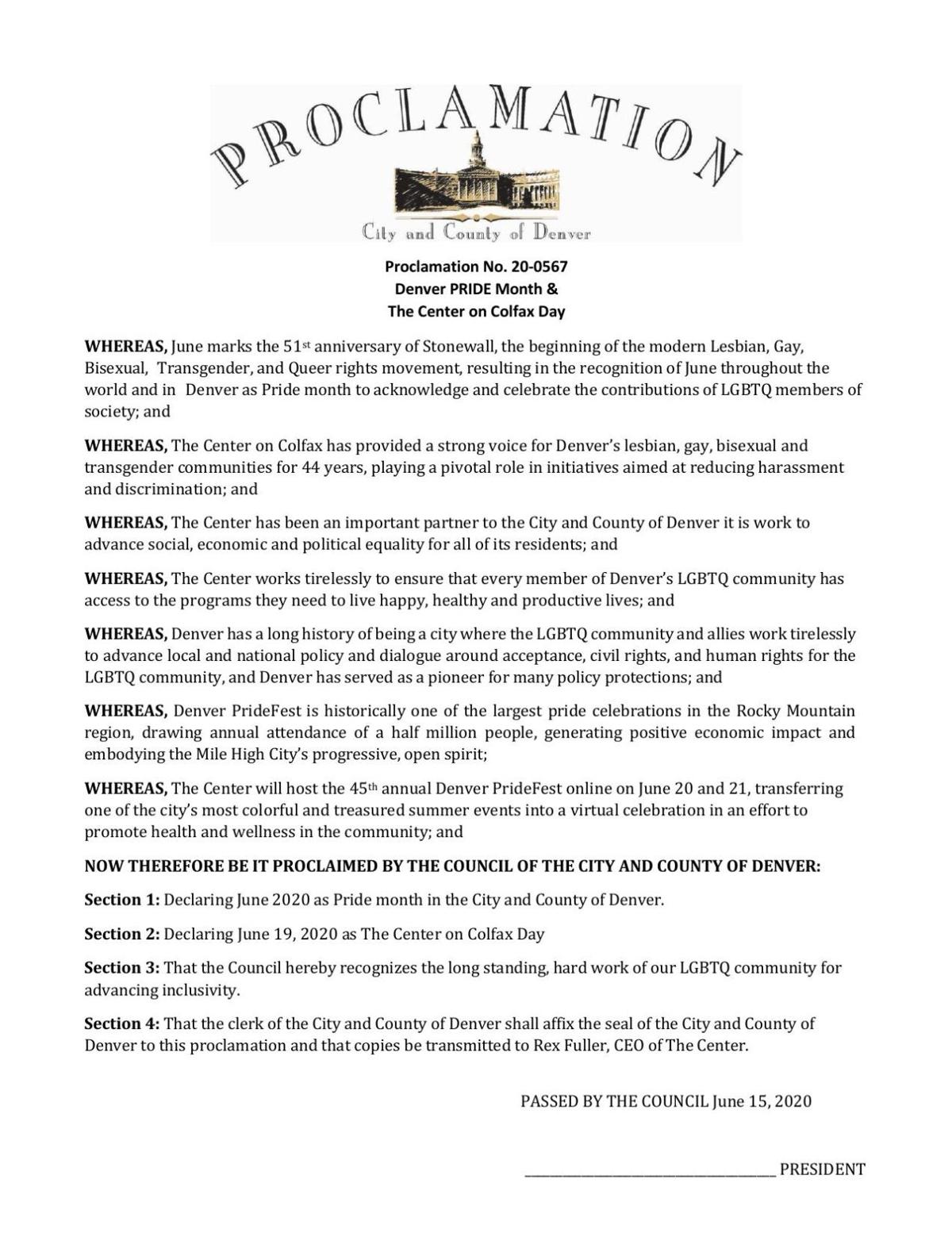 Days after a 6-3 U.S. Supreme Court decision outlawed employment discrimination on the basis of sexual orientation or gender identity, a webinar explored the frustration some Colorado conservatives felt at the consequences, the case’s legal reasoning and the man responsible for it.