An officer with the Denver Police Department filed a city ethics complaint against Councilwoman Candi CdeBaca for comments she made last month in front of protesters that were allegedly intended to “dehumanize and humiliate” police.

In the Sept. 4 Equal Employment Opportunity complaint that Officer Mallory Lutkin submitted to the Denver Board of Ethics, she details an Aug. 19 incident involving CdeBaca that occurred after a confrontation between protesters and local authorities who were breaking up a homeless encampment.

Lutkin said in her complaint that she had been called to the scene in the area of 2900 Glenarm Place after two officers had been assaulted by an “armed party.” Once she arrived, she was advised to hold a line to help secure the scene as the crowd grew.

Shortly after, CdeBaca came to the scene and “demanded” to speak with a supervisor, the complaint reads.

"CdeBaca approached Ofc. Wallace Sam and I," Lutkin wrote. "CdeBaca pointed at Officer Sam (who is black) and stated, ‘You should be ashamed.’ CdeBaca then pointed at me (I am white) and said ‘You, I would expect this from you.’ CdeBaca went on to tell us to look up the laws pertaining to slavery. When CdeBaca made these statements toward me, I felt she was bringing my race into the issue she had with officers being called to this area. The statement directed at me insinuated I am racist because I am white."

The incident was captured on body-worn camera footage from DPD, which can be viewed on 9NEWS, a news partner of Colorado Politics. (Note: The video contains graphic language.)

The complaint goes on to detail CdeBaca calling police officers “[expletive] guard dogs," who didn't know how to read and were only doing what they’re told from Mayor Michael Hancock, who she called a “dumb [expletive] … who thinks he can just sic his dogs on his own [expletive] people.” (Hancock's office did not immediately respond to Colorado Politics' request for comment.)

The complaint also alleges her comments “incited other protestors to demean officers and encourage them to continue to verbally abuse officers."

“While we find the timing of the complaint interesting — just as the Police Protective Association contract for raises is up for a Council vote tonight — we will respond once our legal advisor has an opportunity to review it,” Lisa Calderón, CdeBaca’s chief of staff, told Colorado Politics in a text message Monday.

The ethics complaint also claims that a protester stole a body-worn camera from one of the two officers allegedly assaulted, gave the camera to CdeBaca, and it took 51 hours for the camera to be returned to police.

By withholding the camera, Lutkin alleged, “she was in effect making it impossible for this officer to do his job under the law," and added that "CdeBaca made no effort to contact police and advise that she was in possession of the camera.”

The complaint is being forwarded to the Denver City Council, the Denver Mayor’s Office and the Denver Board of Ethics.

The Denver Board of Ethics is required to screen any complaint it receives within 31 days, and that screening process is done in executive session, where “essentially the question is whether the Board has jurisdiction to investigate or take other steps,” Lori Weiser, the executive director of the Denver Board of Ethics, told Colorado Politics in an email. “If there is not enough information to make the screening decision, the Board can vote to ask me to do further investigation. If that happens, the Board will again screen the complaint, with any additional information at the next meeting, normally within 30 days.”

After the screening process, if the complaint is not dismissed, the board will either ask for written arguments or issue a Notice of Hearing and set a public hearing.

The board lacks authority to sanction, however, if a violation of the Code of Ethics is found to have occurred. The board can only make recommendations to the appointing authority, who will determine disciplinary action.

It’s unclear who the appointing authority is for a council member, Weiser said, as the board “has never had to face the situation of having to recommend corrective action/discipline with respect to an elected official.”

The Board will vote Tuesday morning on what action they will take, Weiser said. If a decision is made tomorrow, an opinion will be issued in writing roughly a week after the meeting.

Last month, CdeBaca sprung a sudden proposal to replace the police department with a largely unarmed “peace force,” an idea that received the cold shoulder from the rest of her left-leaning colleagues, who said they felt “blindsided” by the bill.

The Colorado and Denver GOPs have called for her resignation over the Aug. 19 incident, specifically in light of her likening police officers to dogs.

“Councilwoman CdeBaca continues her push to divide our city by insulting the men and women who serve our community to keep us safe,” Denver GOP chairwoman Kristina Cook wrote in a text message. “Coming as they do from someone who ran to become a leader in our city, she instead is proving that her only aim is to implement a radical agenda that will leave Denverites less safe, with fewer opportunities to create a better life together as a community.

“Her resignation would allow us to focus on healing the divide she and others have created,” she said.

Read the full ethics complaint below: 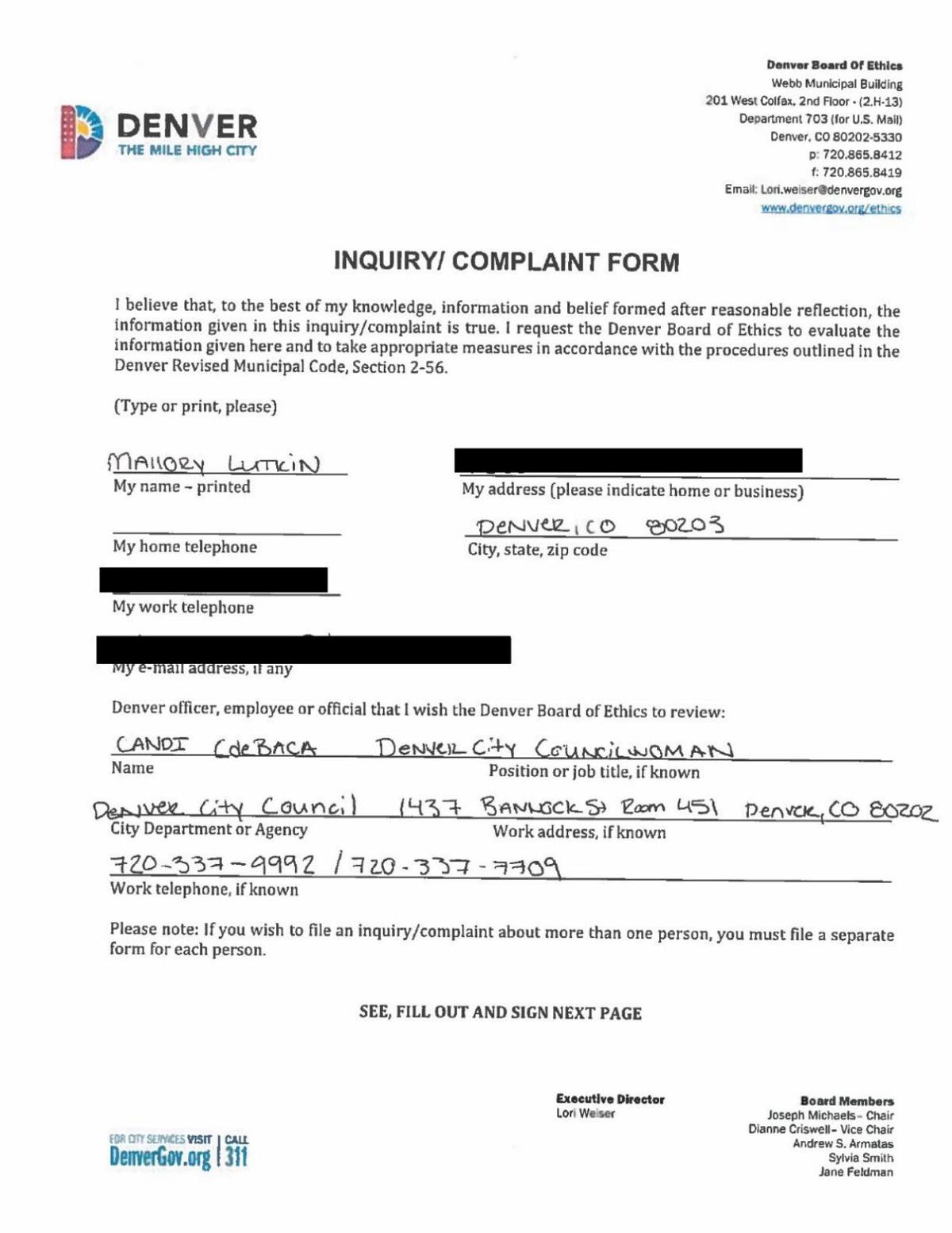 U.S. Rep. Joe Neguse is among the House members sponsoring the Our Lawn Act, a bill to expressly prohibit the use of federal property, including the White House, from use in political conventions or fundraising events.