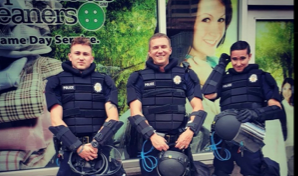 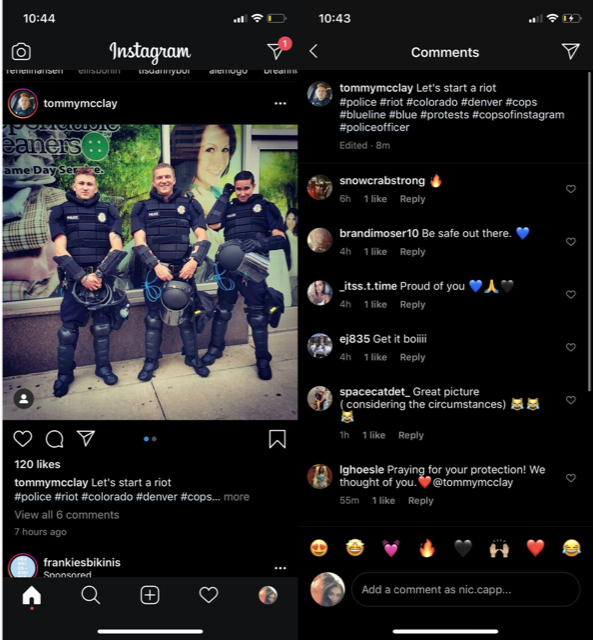 A post purportedly from officer Thomas J. McClay on Sunday, May 31, 2020, was shared on the site Reddit.

The Denver Police Department is investigating a social media post in which a police officer allegedly shared a picture of himself and two other Denver officers in riot gear with the caption, “Let’s start a riot,” before the fourth consecutive night of clashes related to the George Floyd protests.

The photo, which appears to have been posted on Instagram by officer Thomas J. McClay, was shared on Reddit late Sunday night.

Mayor Michael Hancock’s spokesperson Theresa Marchetta was not aware of the incident when contacted by Colorado Politics around noon Monday, and said she would “need to share and look into this.”

“Thank you for bringing it to our attention,” she wrote in an email.

Denver City Councilman Paul Kashmann, who chairs the council's safety committee, is calling for the examination of police's response to protests.

“We are in very disturbing times," he told Colorado Politics in an email. "The murder of George Floyd has once again infuriated people of conscience who cannot tolerate the injustices perpetrated on people of color in America.

"Photos like the one being attributed to a Denver police officer fan the painful flames burning in our cities right now and it is beyond my ability to understand how any thinking person could find it humorous in any way.

"I would expect the Department of Safety to take strong disciplinary action if the allegations prove true," he said. "As Chair of City Council’s Safety Committee I have asked Safety Department leadership to come before Council in the coming weeks to discuss the use of force in crowd control situations. Reports of excessive use of force and targeting of journalists in recent days are concerning and must be investigated."

Kashmann said it "would be appropriate" for the Office of the Independent Monitor to do a "comprehensive evaluation of DPD’s response to the protests to give the public confidence that our oversight role is being taken seriously and to uncover any breaches of service that may have arisen along the way.”

Denver City Councilwoman Candi CdeBaca, who attended the Thursday, Friday and Saturday protests, said, "As a first-hand witness to the police violence and antagonizing of innocent and peaceful protesters, I am appalled yet unsurprised.

"This photo shows exactly what countless people have documented and reported, police came ready to START a riot," she told Colorado Politics in a text message. "We absolutely need protesters and anyone seeking justice to help us advance our efforts with the charter change and making the independent monitor truly independent."

Councilwoman Amanda Sawyer said McClay's post is "extremely upsetting and unacceptable," but cautioned that more information is needed before any conclusions can be made.

Nevertheless, she said, "Why anyone would think that's appropriate or a good idea is beyond me."

Other councilors, including those who sit on the council's safety committee, did not immediately respond to requests for comment.