Denver Mayor Michael Hancock sent a message on Wednesday to a group of council members who, in late April, had written to him requesting a temporary “Safe Outdoor Space” for people experiencing homelessness during the coronavirus outbreak.

Hancock’s message was this: You have the green light, now let's work together to find spots to set up camp.

On July 1, the mayor announced “with some reluctance” his support of a proposal from the Colorado Village Collaborative that will provide emergency support for up to 50 people in Denver’s homeless community. The coalition, which runs the city's “tiny home” village, first brought forth their idea in April.

Hancock said he based his decision on these being “extraordinary times that require extraordinary measures,” a pivot that comes eight years after the city passed its urban camping ban and barely a year since Denver residents voted overwhelmingly to uphold it. (A Denver county judge has since ruled the camping ban unconstitutional, and the city has appealed that decision.)

In Hancock’s letter to Robin Kniech, Candi CdeBaca, Amanda Sandoval, Jamie Torres, Paul Kashmann, Stacie Gilmore, Debbie Ortega and Chris Hinds, he said the city’s intent was to work closely with the Colorado Village Collaborative to set up two to three 50-tent campsites in the city.

He also listed off several reasons why council members should help him in the process.

“Depending on the site, there may be license agreement, zoning or other approvals required by City Council and the Administration. In some cases, Council approval may not be required,” Hancock wrote. "In addition, we do not have a formal process in place to identify sites, regardless of whether they are owned by the city, another public entity or a private enterprise.

“This is why I am writing to you today. Nobody knows your Council district better than you.” 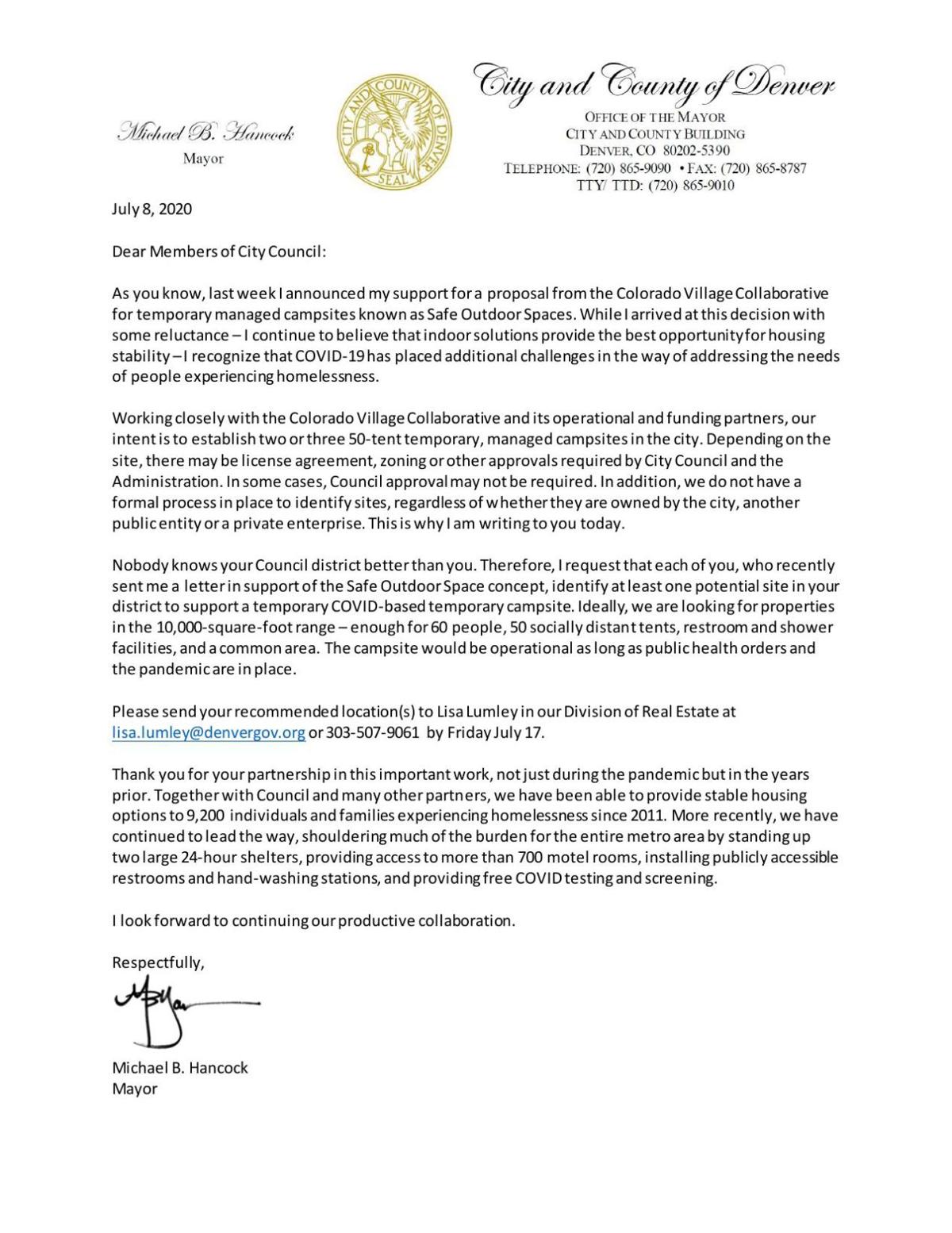 Sandoval, who represents District 1 in northwest Denver, told Colorado Politics she is "thankful the Mayor asked for my input because my council office is usually the first line of defense, more accessible and in touch with community."

CdeBaca, who represents District 9 in the central business district and neighborhoods to the north of Colfax Avenue, said she "hardly" expects "to see a single site outside" of her district, but says she "will put a little faith into his inquiry and see if he is willing to walk the talk of equity." Her plan is to "put up a post and see what community says and make our recommendation based on that."

Kashmann, who represents District 6 in southeast Denver, said when it comes to regulated camping, he has "long thought of larger event sites: The Coliseum, Pepsi Center, Mile High Stadium, National Western. All have enormous parking areas that are seldom used and would make sense to consider," he wrote in an email to Colorado Politics. "I’m wanting to hear more from the Mayor on how such sites might be managed."

Hancock asked that council members identify by July 17 a property in “the 10,000-square-foot range – enough for 60 people, 50 socially distant tents, restroom and shower facilities, and a common area.”

Hancock said the campsites would be operational amid the coronavirus pandemic as long as public health orders are in place. 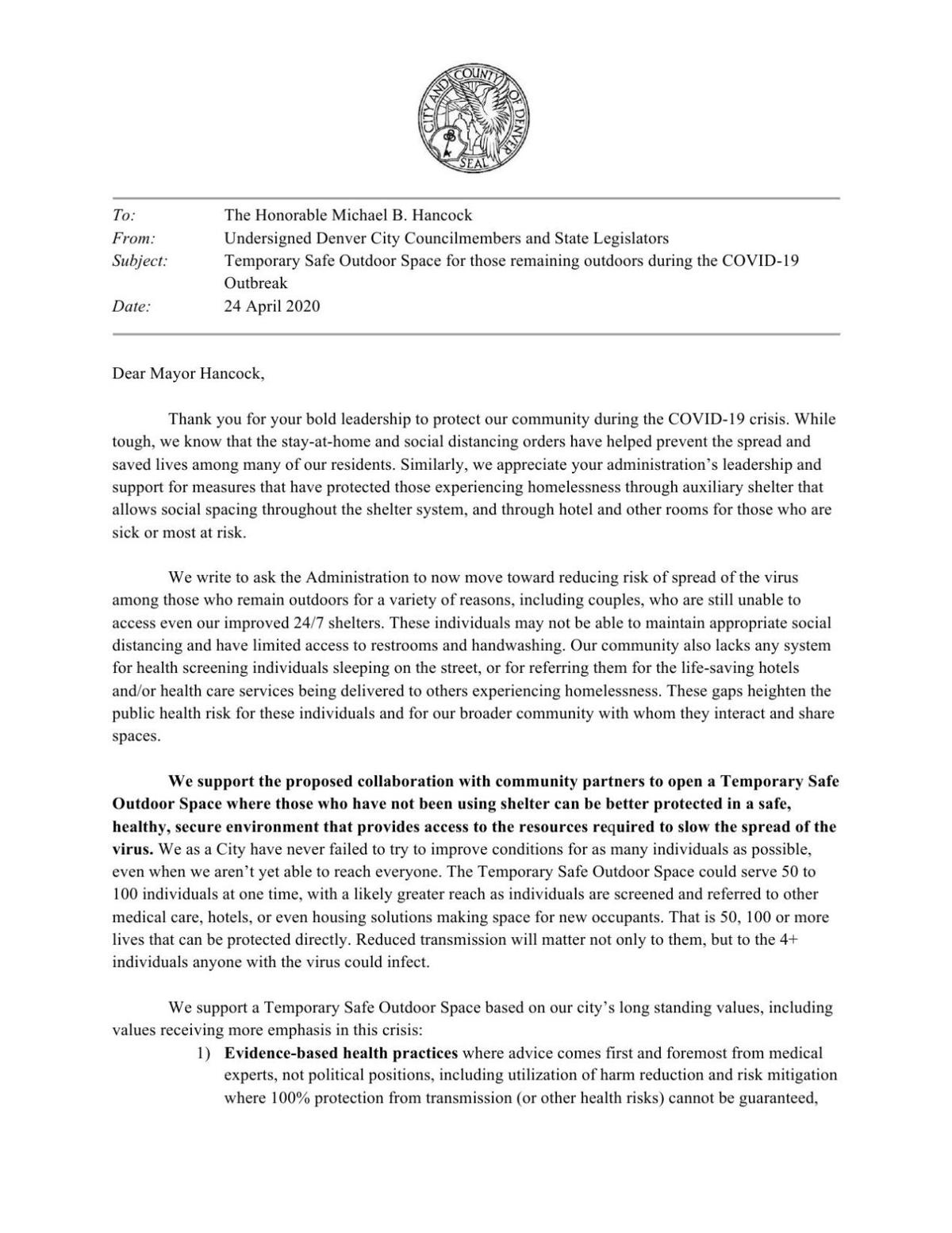 Polis, Hancock tiff on homeless is an unanswered question

Whether the blame Gov. Jared Polis leveled at the city of Denver over homelessness Thursday exposes a rift with the mayor was an unanswered qu…

Denver Mayor Michael Hancock revealed on Facebook Saturday afternoon that a piece of city property in Five Points has potential for a managed campsite for homeless people.