Denver Mayor Michael Hancock on Monday issued a new “stay-at-home” order as the city and county's confirmed coronavirus cases mark the highest of any county in the state.

The public health order will go into effect at 5 p.m. Tuesday and last until April 10, although Hancock said the date could be extended if needed.

“This isn't a recommendation anymore. People need to stay at home,” Hancock said. "We will enforce when and where necessary."

The order requires that all residents stay home and businesses implement work-from-home policies and delivery of goods "to the greatest extent possible."

Residents will be allowed to leave their homes for groceries, medical supplies and to check in on vulnerable residents who might need help. Any other activities, including gatherings in parks for sports games and picnics — which he said the city observed over the weekend — are banned.

Outdoor activities in parks, such as walking, hiking and running, will still be allowed, as long as social distancing is practiced, but playgrounds will be closed. Park rangers will be tasked with ensuring compliance, Hancock said.

Just three hours after the mayor issued the new order, a sea of people flooded the city's liquor stores and dispensaries before they were set to close Tuesday evening. But then the city decided to walk back some of its rules.

In other words, officials with Denver's Office of Emergency Management said, that means ensuring patrons remain 6 feet apart from each other at all times.

The city also clarified that all construction operations and projects will be exempt from the stay-at-home order.

To-go orders at restaurants also will still be permitted. 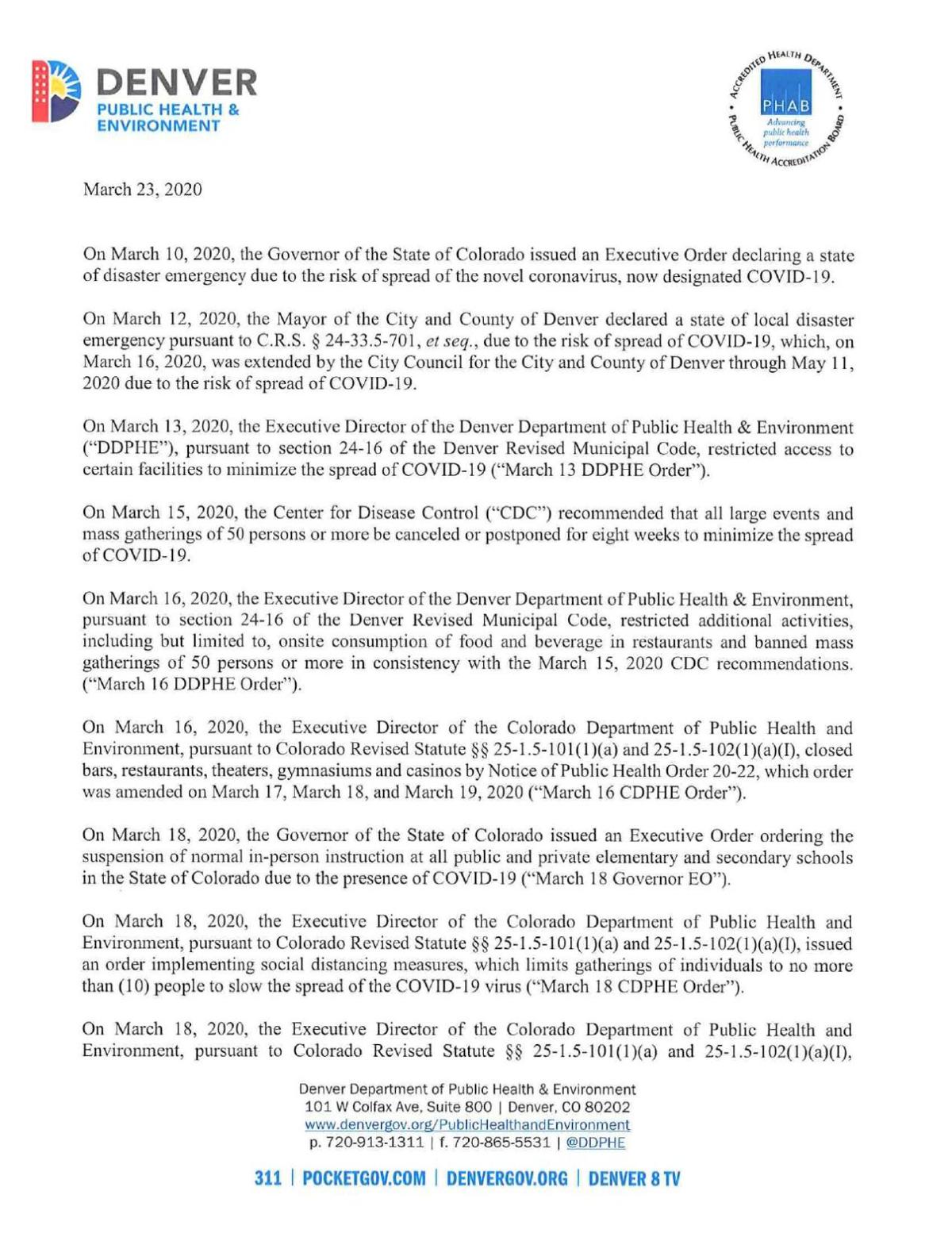 Denver International Airport will continue to operate. The city would need to go through a federal advisement, Hancock said, if it wanted to shut down the airport outside of the imminent threat of safety.

"The bolder and quicker we move, the faster we can end this economic trauma in our economy," Hancock said. "We don't want to extend the economic pain of the people of Denver, and that's why we have to take bold moves to begin to help this city get on the other side of this curve."

Polis on Monday responded in a statement to the mayor's stay-at-home order:

“I’m strongly in support of these local efforts, and it’s extremely important that just as our state is acting boldly and urgently, that our county health departments are also taking strong actions guided by science, data, and the real-life situation on the ground including taking into account local factors like population density and concentration of Coronavirus cases, to best contain the spread of the virus."

As of Monday afternoon, 720 COVID-19 cases have been confirmed in Colorado, and seven people have died from the disease, according to the state health department. At least 148 cases have been identified in Denver.

"We're going to get on the other side of this by everybody cooperating and staying at home," Hancock said.