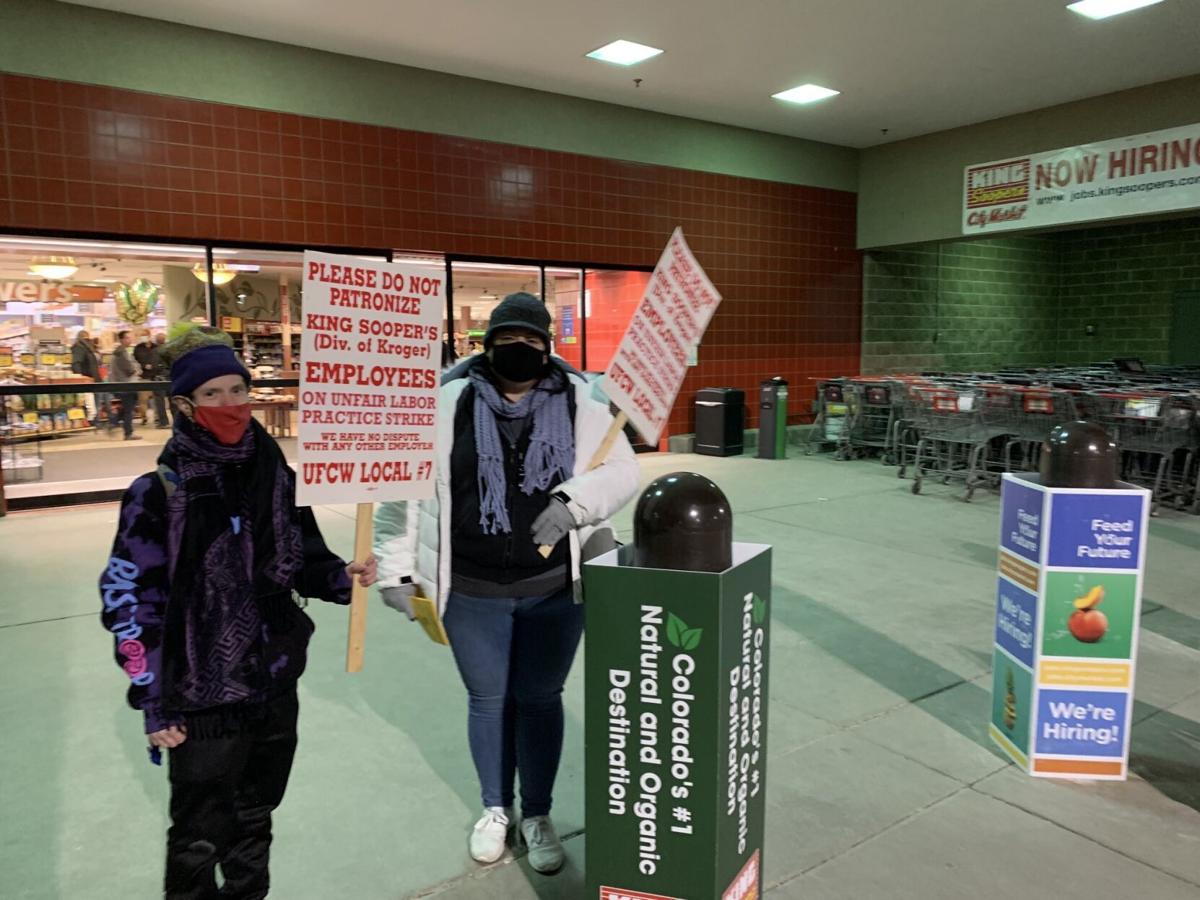 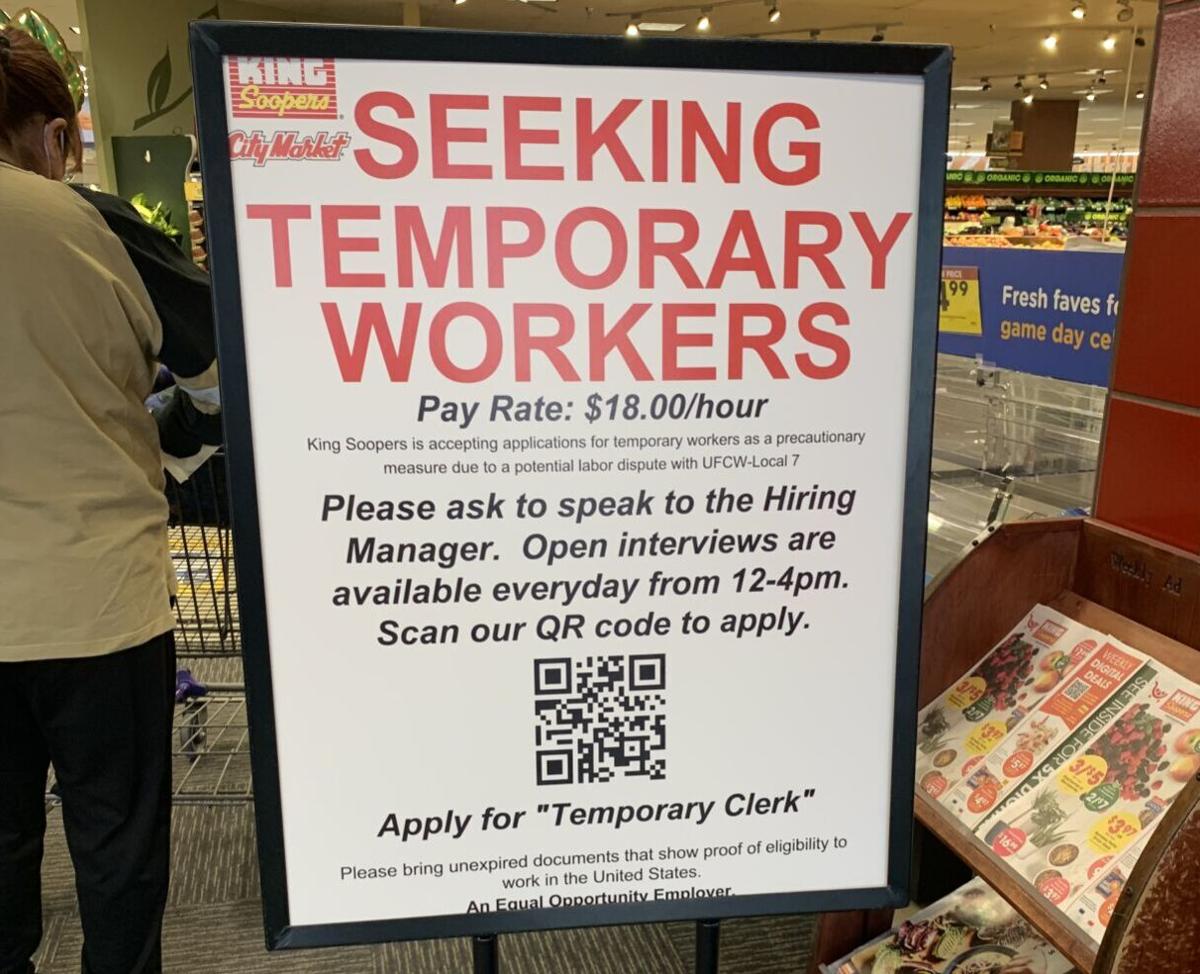 Signs calling for temporary workers (at $18/hour) are appearing in front of all metro Denver King Soopers store Tuesday as they are bracing for a strike of United Food and Commercial Workers Local 7 union workers Wednesday morning. About 8,700 workers at 78 Denver metro area stores are scheduled to strike.

Signs calling for temporary workers (at $18/hour) are appearing in front of all metro Denver King Soopers store Tuesday as they are bracing for a strike of United Food and Commercial Workers Local 7 union workers Wednesday morning. About 8,700 workers at 78 Denver metro area stores are scheduled to strike.

Picketers were out bright and early in the sub 30-degree temperatures with signs and hope their efforts could prompt a change.

On Tuesday morning Scott Siddons was serving lattes to King Soopers Parker customers at the store on Lincoln and Jordon roads. At 5 a.m. Wednesday, he assumed his "picket captain" duties in front of a store with one other picketer. A store manager and security guards lectured the pair about staying out of customers way, and off the sidewalk in front of the store entrance. They argued the girl scouts are allowed to be on the sidewalk.

"We'll have about 4-5 picketers out today," Siddons said, noting half the store's workers are non-union members.

Michael Smith, 24, deli worker at the Stroh Ranch King Soopers in south Parker, said they expect to have 10-20 picketers throughout the day.

An example for his department is corporate bringing vendor Boar's Head into the stores to stock the shelves, taking jobs from union workers.

"They've got security guards in there like they're expecting a riot," he said. "We're not here to get in customers' way. We're not mad at anyone."

"That $16 per hour hiring wage hasn't hit us. They pay us $12.35 because we're unionized and they haven't changed the wages yet."

The strike is expected to last until Feb. 2.

Union members get $800 a week to strike 40 hours. There's also an option of $100 per week for non-picketers who don't cross the line, Smith said.

"This means a lot to me personally. I went on disability and that's all through the union," said Smith.

“Local 7 is putting politics before people and preventing us from putting more money in our associates’ pockets,” said Joe Kelley, president of King Soopers/City Market, in a news release. “It’s time for (UCFW Local 7 President) Kim Cordova to put our associates, her members, first instead of denying them the opportunity to vote on this unprecedented investment. Creating more disruption for our associates, their families, and Coloradans rather than negotiating for a peaceful resolution is irresponsible and undemocratic.”

Shopper Dawn Perez, 48, of Parker said Tuesday evening she would not return to her neighborhood store on Parker and Cottonwood roads until the strike is over.

"I'm a former Local 7 member. I won't cross," Perez said. "These corporations are making a lot of money off these workers' backs. And they only offered 13 cents over minimum wage?"

"I've watched all the news, but I don't know if I can trust either side," said Perez. "But we stocked up anyway and are not coming back until they pay their workers."

The strike caps an acrimonious period of “unfair labor practices” accusations being tossed from both sides after the union’s 8,700 grocery workers in metro Denver stores voted overwhelmingly to strike. The union represents about 17,000 of The Kroger Co.’s 22,500 employees in Colorado King Soopers or City Market stores.

Colorado Springs stores, and others not in metro Denver like those on the West Slope, are not impacted by the strike as their workers have different contract timelines.

Union representatives are hoping the strike will have a debilitating effect on the grocery chain, Kim Cordova, president of UFCW Local 7 in Colorado and Wyoming, said previously.

Labor shortages already have hit King Soopers, which like other stores has seen some employees out of work because of COVID-19 or because they chose to quit as part of the Great Resignation that's swept the nation. It’s not clear if the strike will force full-store shutdowns or adversly impact customers' shopping experience. Denver Gazette journalists witnessed longer-than-normal lines Monday night and Tuesday mornings at metro Denver stores. There were also security guards present, where there had been none before, and prominent “Seeking Temporary Workers” signs advertising $18/hour jobs.

King Soopers officials vowed Wednesday not to close any stores.

Cordova said the union could pull workers from stores all at once or pick and choose from which stores to pull workers and do so incrementally.

“We know what we’re doing, our members and us know what stores we’ll be selecting, what stores go out at what time,” Cordova said. “We can pull them out at any time we want. … There’s a lot of strategy around this.”

Local 7 and King Soopers began negotiations in October, but talks became contentious last week after the votes Jan. 1 and 3, where union members in Denver and Colorado Springs, respectively, overwhelmingly authorized a strike.

"I'm not coming back until they pay those workers fairly," said Vicky Caler, 63, of Parker at a King Soopers Tuesday evening. "From day one of the COVID, they've been there like first responders, police and firefighters. They should get paid."

Caler said she'd shop at other grocery stores until the strike is over.

Other shoppers said they might skip King Soopers stores just to avoid the hassle.

"We'll probably go to Safeway or Wal-Mart," said Steve Santi, 49, of Parker. "It's the path of least resistance, and it's hard to tell which of the two sides is right."

Other shoppers said they would "absolutely" keep coming to their neighborhood store, but declined to be identified or comment further as to why.

As far as pharmacies, each store is different as to whether the pharmacy technicians are union members and thus possible impact to service levels because of a walk out. Contact your store for specifics.