Opinions among Denver City Council members vary as leaders wrestle with the reopening of indoor dining and relaxation of capacity restrictions that went into effect Monday.

The move comes in response to Gov. Jared Polis’ announcement last week that all Level Red counties across Colorado would be downgraded to orange, the third-highest tier, with certain restrictions eased in part to throw a longer lifeline to restaurants, whose profits have been slashed in the wake of public health orders.

Only heightening uncertainty is the recent discovery in Colorado of a coronavirus variant that has spread throughout the United Kingdom and resulted in a harsh new lockdown announced by Prime Minister Boris Johnson on Monday.

“I hear a lot about reopening because we have hospital capacity, but I have yet to see any analysis on how increasing circulation and in-door dining without masks — just as the mutation hits Colorado — could impact [Denver Public Schools'] planned school reopening,” Kniech told Colorado Politics.

DPS officials have said they are still on track to bring students back for in-person learning later this month.

Hinds revealed he was “worried” about the relaxing of rules, citing a September report released from the Centers for Disease Control and Prevention that found adults carrying the virus were “twice as likely” to have reported dining at a restaurant than those who tested negative for COVID-19.

With possible gatherings over the holidays, CdeBaca suggested city health officials should have waited to see if cases spike before taking any policy action.

“I don’t think it’s wise coming off of a holiday to ease restrictions,” CdeBaca wrote in an email. “Many of us witnessed social media posts of larger-than-allowed maskless gatherings over the last week. We should at least give it two weeks to assess the impact of those gatherings before we ease restrictions."

However, Mayor Michael Hancock’s administration has applied to roll the rules back further for some businesses, a move he said he felt "strongly" about.

On New Year’s Eve, Hancock sent a letter to Denver City Council to announce he would be submitting an application later that day to participate in the governor’s 5 Star State Certification Program.

The program is designed to create a certification process for businesses that meet "enhanced" safety guidelines in qualifying counties to open at greater capacity.

“We have too many unemployed residents, too many small businesses at risk of shutting their doors permanently and too many livelihoods at stake to reject this opportunity," Hancock penned to council members on office letterhead. "We also have an obligation to keep COVID-19 from spiking disastrously and taking lives. This application will not jeopardize that overriding priority.” 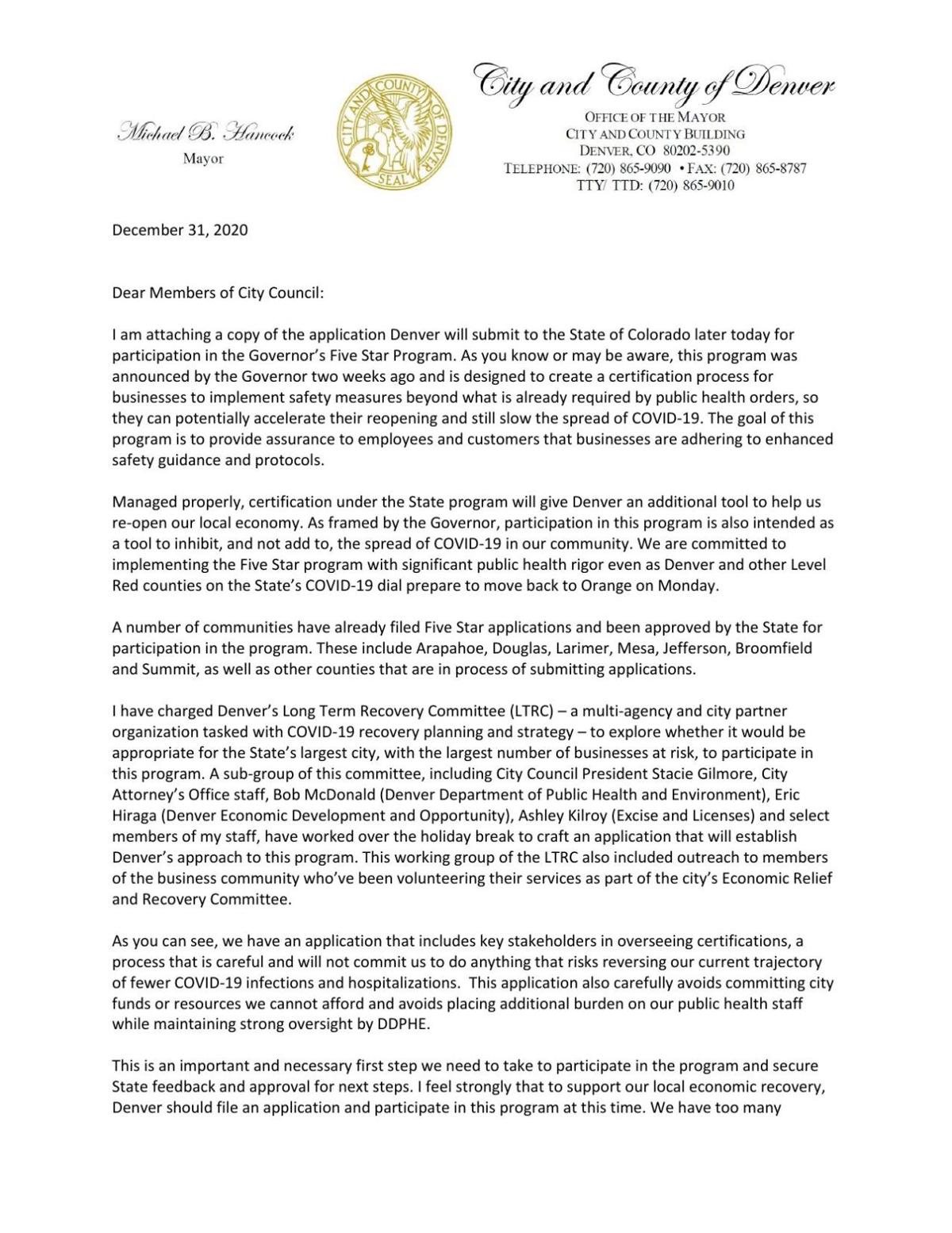 Until the city receives approval into the 5 Star State Certification Program, District 4 Councilwoman Kendra Black said the city’s new orange status is a “good interim step,” adding that she has “confidence” in the city and state health departments’ decisions.

“They have been very cautious and conservative thus far,” she told Colorado Politics. “I am comfortable with their decisions and know that they will monitor cases and hospitalizations and make future decisions based on that data.”

District 2 Councilman Kevin Flynn said with the introduction of the vaccine and the public health metrics to quality the city for the 5 Star State Certification Program, he remains “cautiously supportive” of the city’s choice to apply.

“Maintaining orange-level numbers for at least two weeks is a benchmark we all want to see before the slow re-opening can begin,” he wrote in an email, “and I know that our public health professionals will closely monitor our case numbers in the event they start to spike again."

Under the new limits, restaurants can have as many as 50 people eating indoors at once.