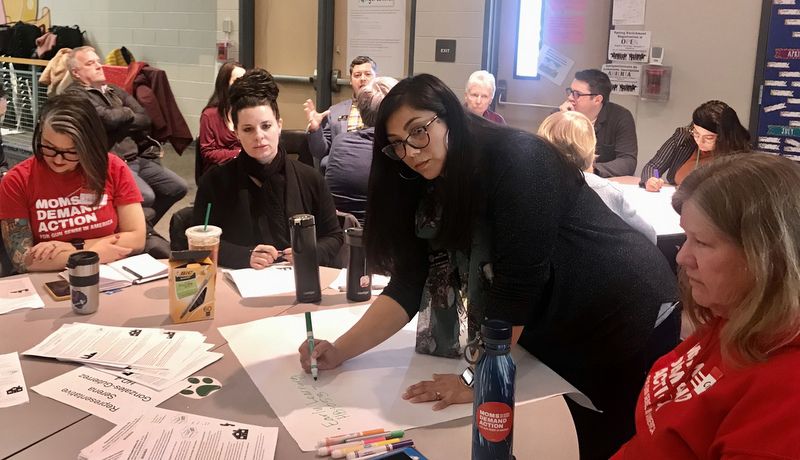 Rep. Serena Gonzales-Gutierrez of Denver writes down topics that town hall attendees talked about during their 20-minute session with the lawmaker. A number of those who initially sat at her table were members of the group Moms Demand Action. 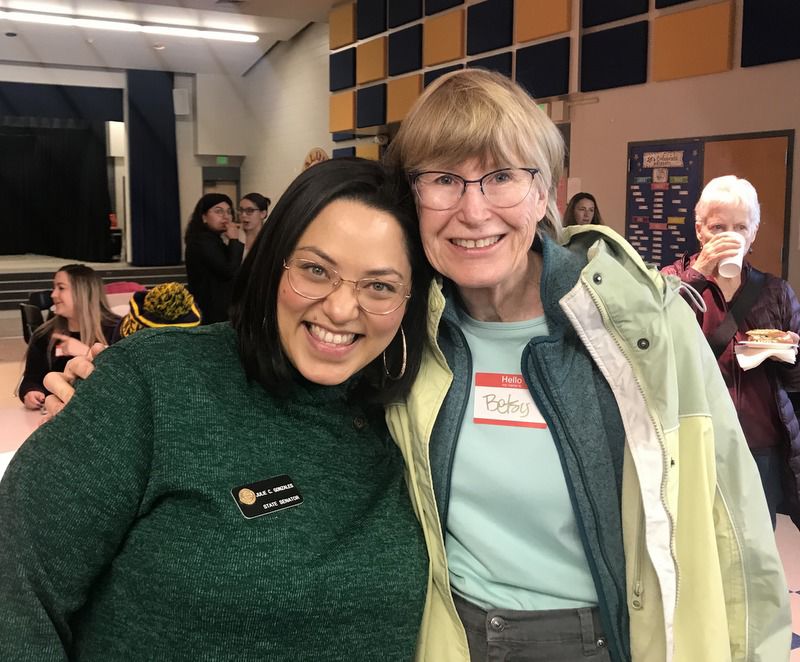 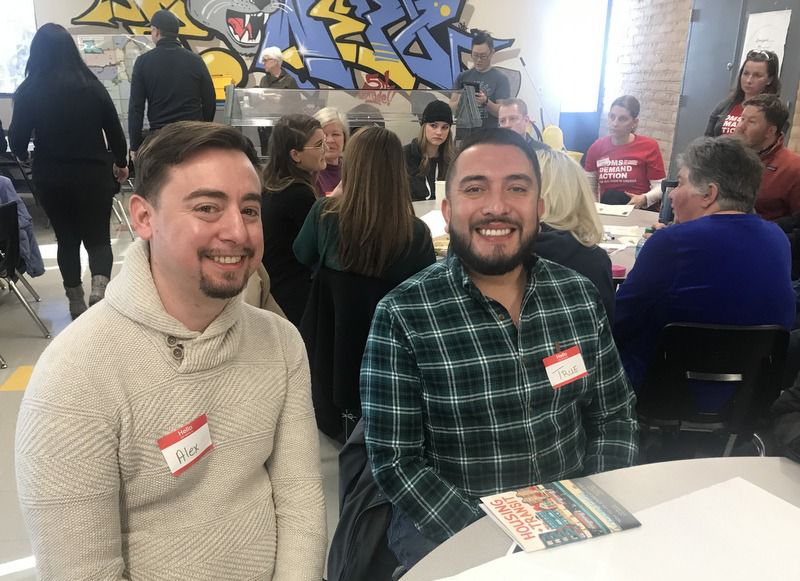 Alex Apodaca-Cobell, left, and True Abodaca-Cobell, who were married last September, expressed concerns about affordable housing and the Regional Transportation District's future at a town hall in north Denver on Feb. 8. 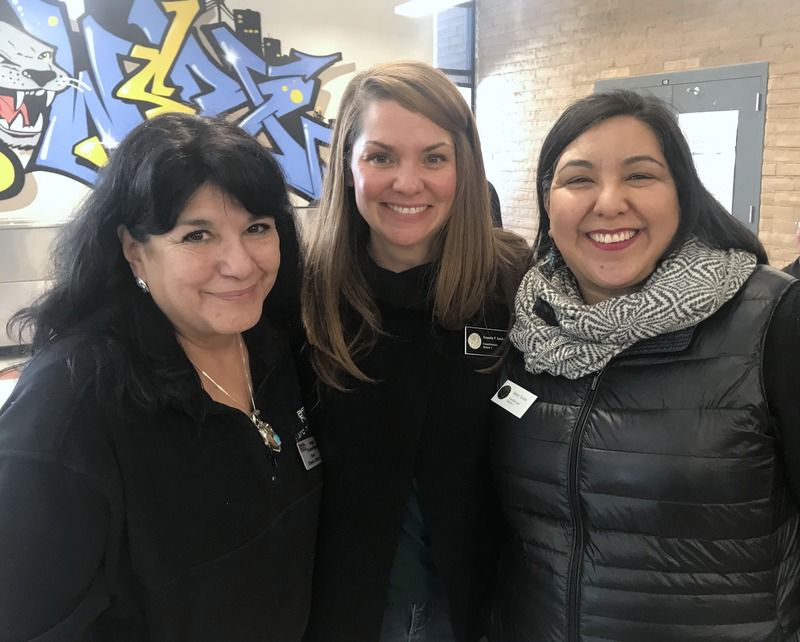 Three of the elected officials who participated in the Feb. 8 town hall at Valdez Elementary School were (from left) Angie Rivera-Malpiede, chairwoman of the Regional Transportation District board, and Denver City Councilwomen Amanda Sandoval and Jamie Torres. 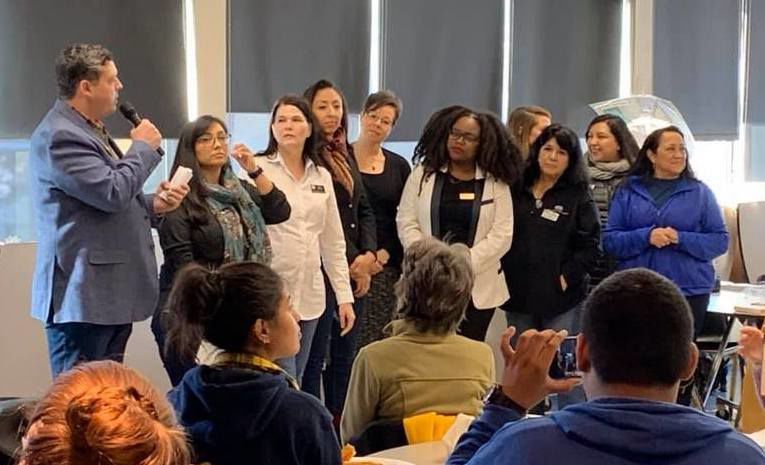 A number of elected officials participated in a Mega Town Hall Saturday at Valdez Elementary School in north Denver on Feb. 8. From left to right: Reps. Alex Valdez, Serena Gonzales-Gutierrez and Susan Lontine; Denver City Councilwomen Candi CdeBaca, RTD board member Shontel Lewis next to RTD board chair Angie Rivera-Malpiede; behind them are Councilwomen Amanda Sandoval and Jamie Torres and to the right is Councilwoman Deborah Ortega.

Child care. Homelessness. Affordable housing. The issues that elected officials and concerned citizens discussed over tamales and bagels on a Saturday morning weren’t too surprising — except for now and then.

The “Mega Town Hall,” as it was billed, featured Denver state lawmakers, Denver City Council members and board members from the Regional Transportation District. Most hail from central and west Denver.

“The number of people who communicated that they feel isolated by social media, and how they believe social media is leading people to lose the ability to have a productive conversation,” he said. “People seem ready to feel a real sense of community again.”

Transportation. Tiny houses. The Taxpayer’s Bill of Rights, or TABOR, which they believe has crippled government from funding needed services.  The discussions were friendly but at times intense.

She didn’t think of inviting Denver school board members until the last minute and they couldn’t attend. They will be given plenty of notice before the next meeting, Gonzales said.

I lived in north Denver for more than 20 years so I wasn't surprised that the conversations veered left.

“I hope I never have to drive by a park again while a sweep is taking place; it’s heartbreaking,” Valdez said, referring to homeless camps.

And I thought to myself, “I hope I never have to drive by a park when the city is cleaning up after a sweep.”

In mid-January, city officials evicted campers from Liberty Park across from the state Capitol because of “hundreds of rats.” When Occupy Denver occupied that same park in 2011, stories about the feces clean-up were horrific.

Among those attending the town hall:

Betsy Daniel, the chair of House District 4, represented by Serena Gonzales Gutierrez. Daniel is getting an award in April at the Colorado Democratic Party’s Obama dinner for her volunteer work. “I have nothing but positive things to say about what Julia, Serena and Alex have started with public participation,” Daniel said.

Mary Helen Sandoval, mother of north Denver City Councilwoman Amanda Sandoval. “Breaking into these small groups and having people say what was on their mind was really effective and energizing,” the elder Sandoval said.

The councilwoman said neighbors met neighbors and talked about a “pay as you throw” trash policy based on the amount of trash generated, and the need for more bike and pedestrian infrastructure throughout Denver.

Councilman Chris Hinds had planned to attend but couldn’t get out of his building because of the snow. Hinds uses a wheelchair and his predicament led to discussion about accessibility.

“I loved that so many people came out in the cold weather to share their input on many important community topics with the hope and expectation that these issues find their way to policy changes in work we do in city and state government,” Denver City Councilwoman Debbie Ortega said afterward.

Councilwoman Jamie Torres said her favorite moment was watching all the raised hands when Gonzales asked if this was their first town hall.

“Every day we are trying to reach new residents, and our job is to change our format and meet our residents in new ways. This was one great example of how we can do that,” she said.  “Most town halls involve lots of speeches from electeds and I was excited that this one would not be that.”

Rep. Serena Gonzales-Gutierrez said one of her constituents talked about “decolonizing” events and spaces by acknowledging the original indigenous people who occupied the land.

“I think it’s important to never forget that, and I am even thinking of how this can be incorporated in our work every day,” she said.

After meeting with community members, elected officials shared what they heard.

RTD chairwoman Angie Rivera-Malpiede got a big laugh when she said she was heartened to hear how many people love the transit agency. The Regional Transportation District is going through rocky times. Ridership is down and fares are up.

The most worrisome moment for me: private prisons. It’s no surprise that folks want them to close and are grateful the legislature has taken up the effort, but I was alarmed at what seemed to be a lack of compassion for the communities where they are located.

Rural Colorado is not Denver. There aren’t signs on every other business begging for workers.

But for the most part, the town hall was exceptional in so many ways.

“There was this moment in one of the breakouts when my small group realized that I wasn't going to respond to every individual comment, and the whole dynamic shifted,” Gonzales said.

“People started talking to each other. Within just a few minutes, one person talked about the importance of gun violence prevention policies, while another person said that they felt there was also a need for more mental health resources in schools. A third person chimed in to comment about the need to stop putting cops in schools and use the funding to instead hire more school psychologists and counselors.”

That afternoon, Gonzales got an email:

“That was the best organized and (most) worthwhile civic engagement event I’ve ever attended.”

That’s a sentiment shared by many who gave up their Saturday morning.