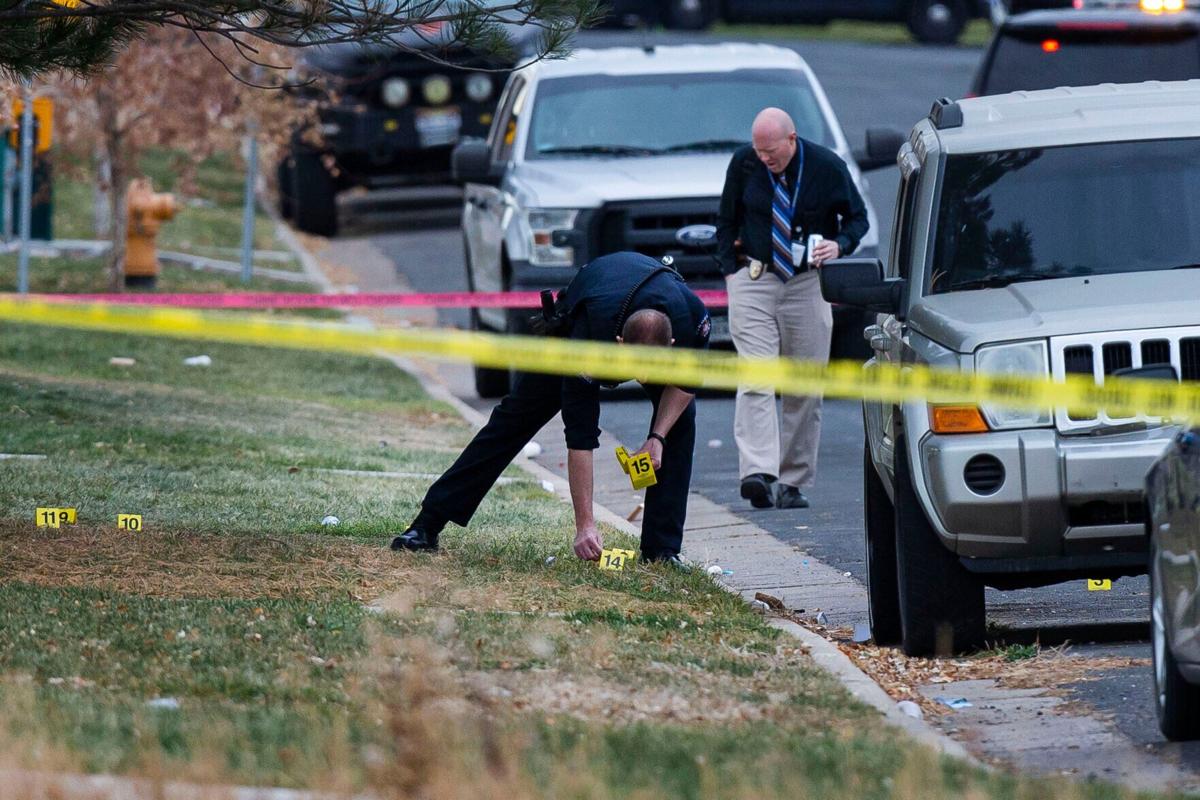 An investigator marks evidence at the scene of a shooting at Nome Park on Monday, Nov. 15, 2021, in Aurora, Colo. (Timothy Hurst/The Gazette) 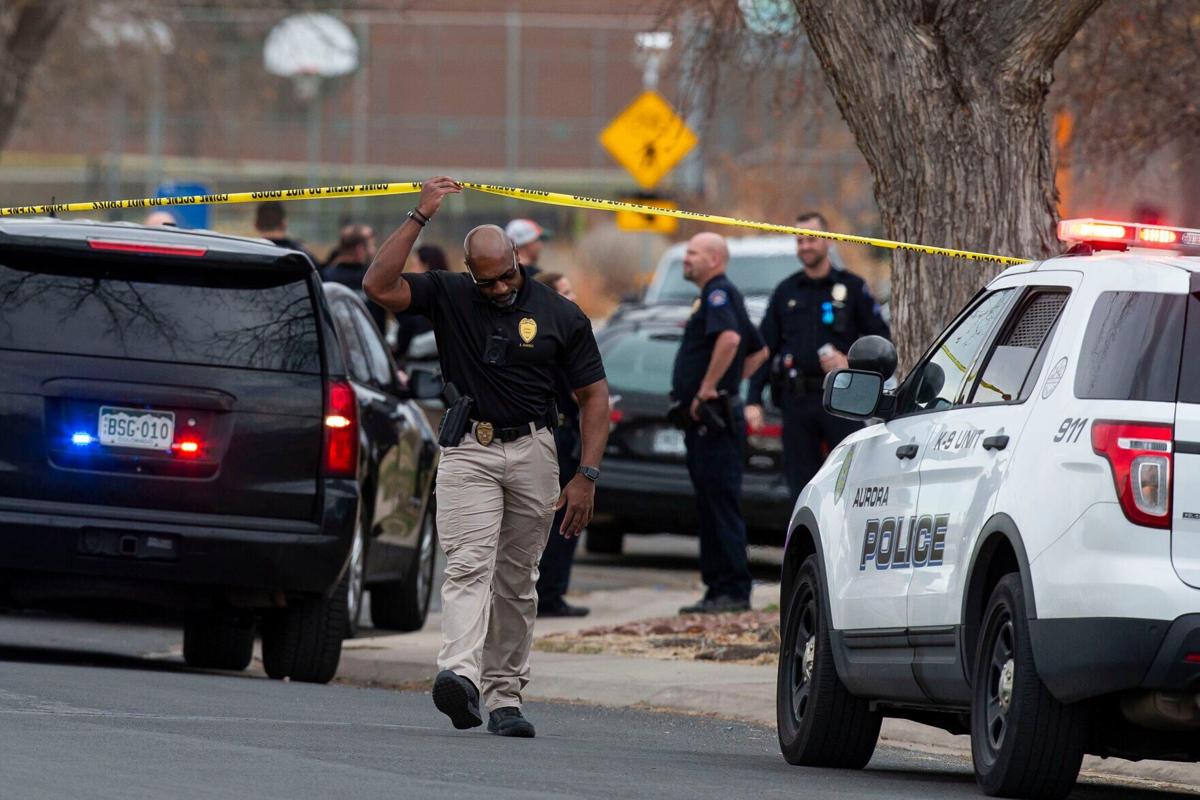 An investigator walks under crime scene tape at the scene of a shooting at Nome Park on Monday, Nov. 15, 2021, in Aurora, Colo. (Timothy Hurst/The Gazette) 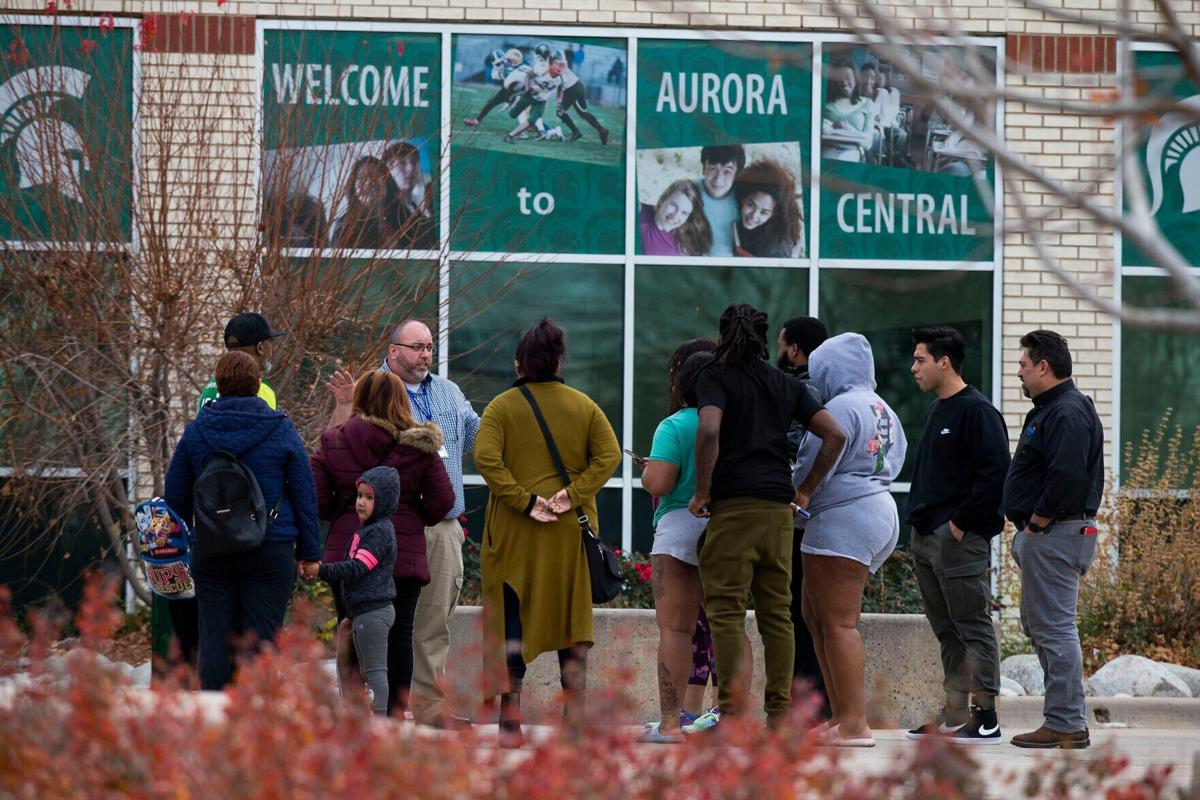 A school official talks with gathered community members outside Aurora Central High School which had restricted access due to a shooting that occurred at neighboring Nome Park on Monday, Nov. 15, 2021, in Aurora, Colo. (Timothy Hurst/The Gazette) 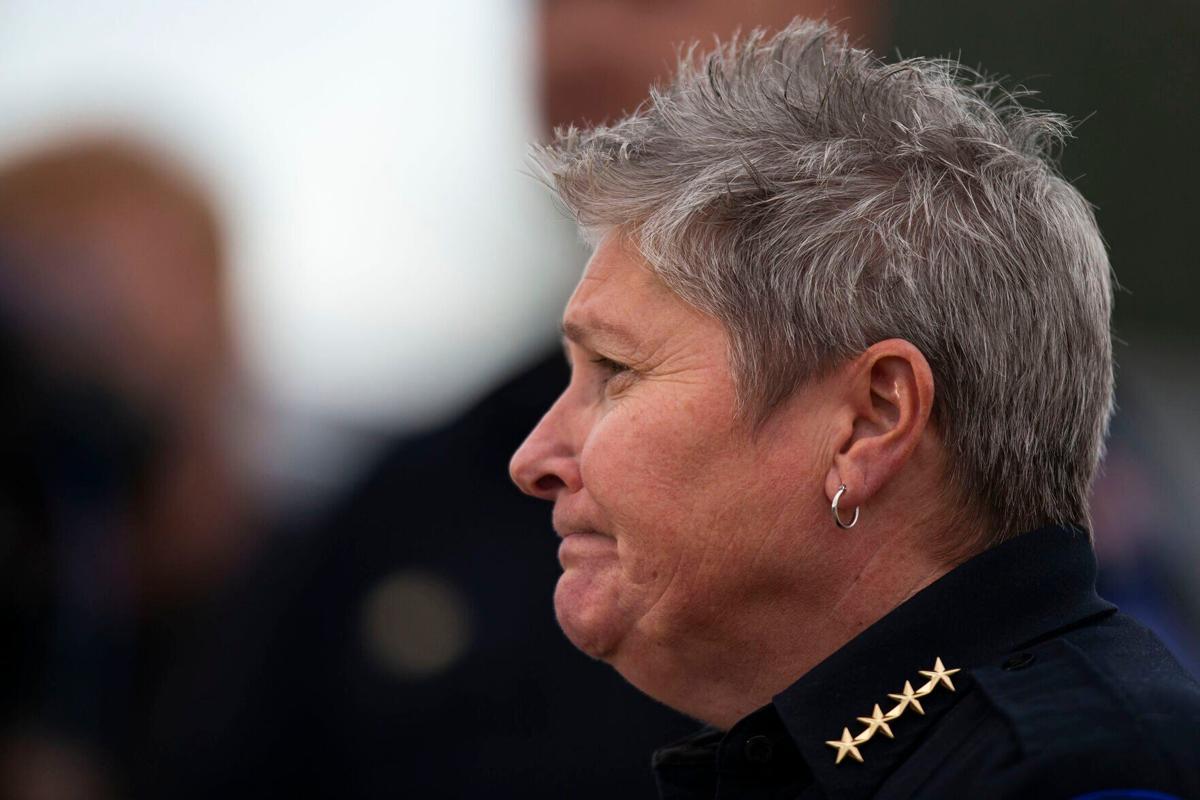 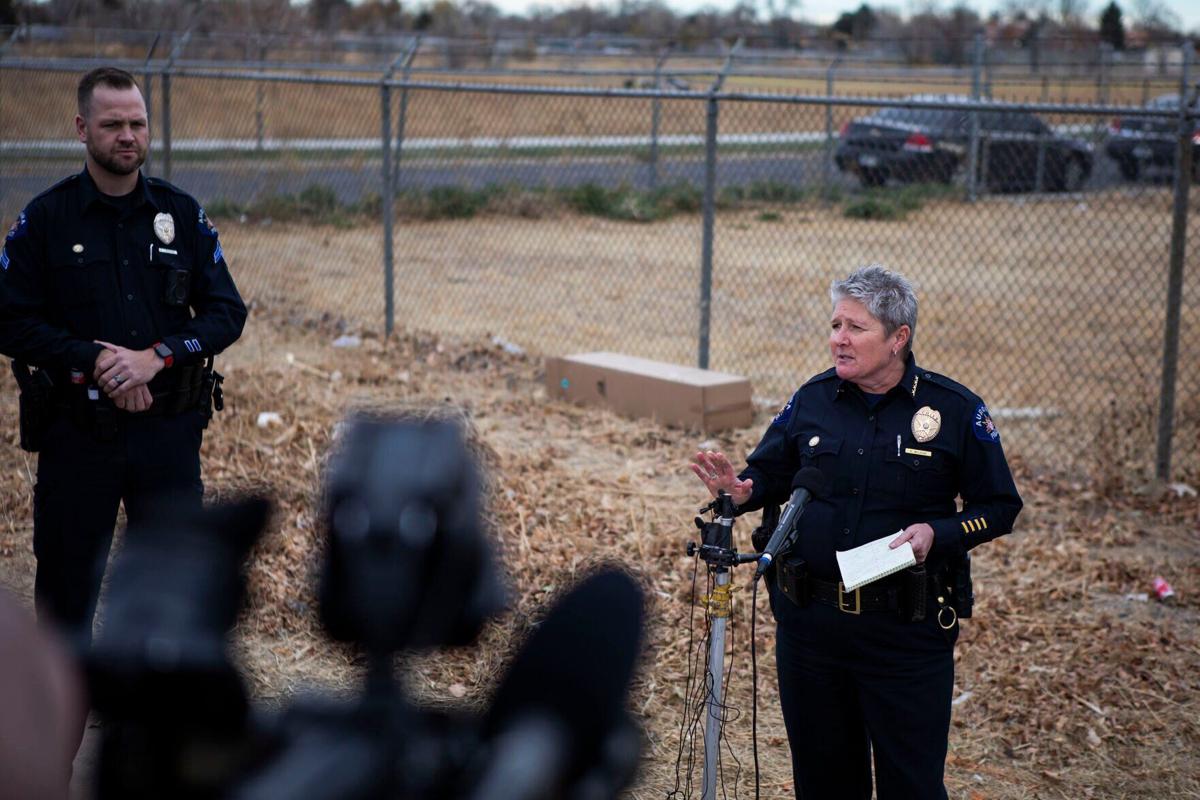 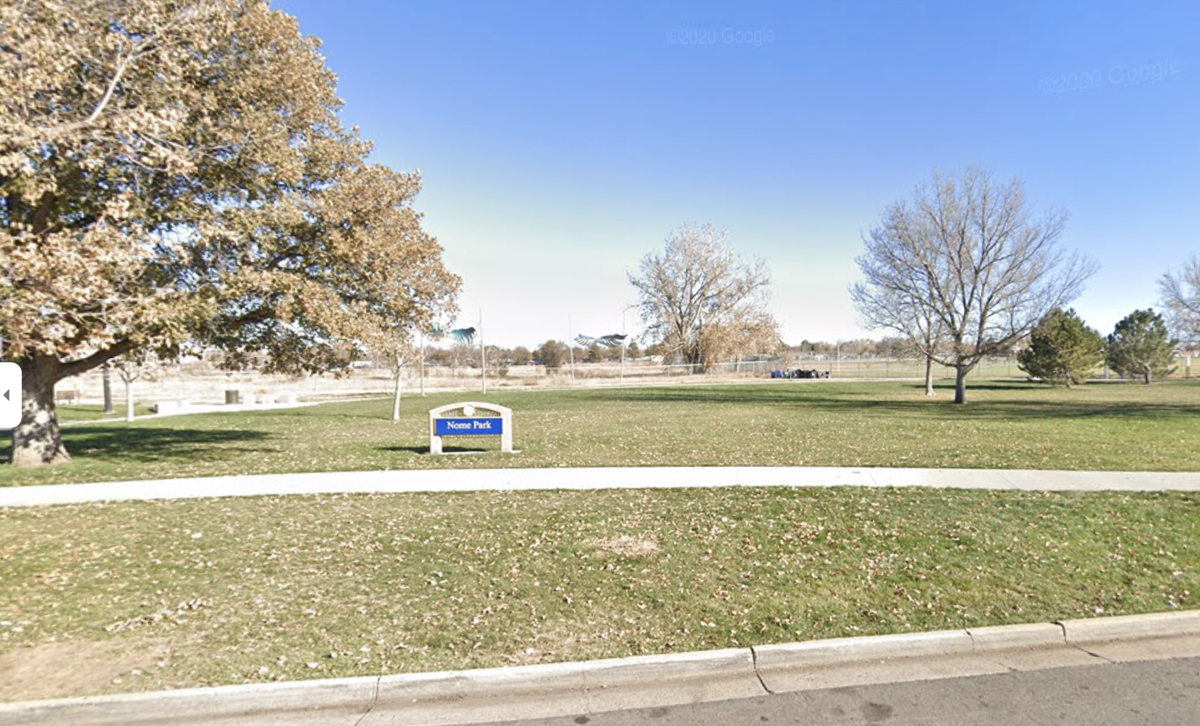 An investigator marks evidence at the scene of a shooting at Nome Park on Monday, Nov. 15, 2021, in Aurora, Colo. (Timothy Hurst/The Gazette)

An investigator walks under crime scene tape at the scene of a shooting at Nome Park on Monday, Nov. 15, 2021, in Aurora, Colo. (Timothy Hurst/The Gazette)

A school official talks with gathered community members outside Aurora Central High School which had restricted access due to a shooting that occurred at neighboring Nome Park on Monday, Nov. 15, 2021, in Aurora, Colo. (Timothy Hurst/The Gazette)

Six teenagers were wounded Monday afternoon in a shooting at a park near an Aurora high school, the Aurora Police Department announced.

Police found five victims between the ages of 14 and 17 at Nome Park at Peoria Street and East 13th Avenue, just north of Aurora Central High School. Police announced the shooting at 1 p.m.

A sixth victim, who is 18 years old, showed up at a hospital with minor injuries, police said.

All six victims are students at Aurora Central High School.

“I need all of us to be outraged by what happened here today,” Wilson said during a news conference. “There’s a violence crisis across the nation right now. ... Enough is enough.”

Police were searching for suspects who left the scene before officers arrived. Wilson said some of the gunshots came from a vehicle driving by, but police believe another shooter may have been on foot.

It is not yet known whether the suspects are also students at Aurora Central High School.

As of Monday night, no arrests had been made and no suspect information had been released. Wilson said neighbors described seeing suspicious vehicles in the area right before the shooting.

All six victims were near each other when they were shot, but police do not know if the group was targeted. Wilson said Aurora and Denver's gang units are investigating the shooting, but it is too soon to know whether it was gang related.

Dakota Newland and Taniyah Moore, both ninth graders at Aurora Central High School, said they were used to hearing gunshots near the school.

“It’s just the area,” Moore said. "It’s the area and the people that live around it.”

Persais De Haro, a 10th grader at the school, said she wasn't concerned about the shooting until she heard one of the victims was someone she knows, a friend of a friend.

“At first I didn’t really get scared because it’s pretty normal around here," De Haro said. “He’s a good student, a good friend, as well. … He’s special to everyone.”

De Haro said if the victim were to be seriously hurt or killed, “it would break a lot of hearts.”

Students frequently hang out at the park over the lunch hour, said Happy Dyer, who lives across the street from the park. They’ll eat or throw a football around, and sometimes there will be fights there, he said.

Shootings are also common, Happy Dyer said. Someone opened fire in the direction of the park and then sped off in a vehicle just a few weeks before. That wasn’t the first time, he said.

Darlene Dyer, Happy’s mother, said she was in her bedroom when the family’s three dogs started barking Monday. Darlene Dyer is hard of hearing, and the dogs bark at everything; when she saw there was no one at the door, she went back to her room.

But the dogs kept barking, and the next thing Darlene Dyer heard were sirens. She went outside and saw paramedics and officers treating two people — a boy and a girl — on the grass two houses down, across the road from the park.

The girl was loaded onto a gurney with her elbow wrapped, she said, while the boy was propped up between two officers and carried to an ambulance. His clothes had been cut away by first responders, and he had a blanket draped over him. When he was put into the ambulance, Darlene Dyer said, the vehicle “took off.”

The Dyers have a camera on the front of their home, and early Monday evening, an Aurora police officer stopped by to get the footage. Though the shooting took place out of view, Happy Dyer said you can see a group of teens hanging out; then a few begin to run, followed by the rest a moment later.

A teenage boy can then be seen hopping across the street toward a house two doors down from the Dyers; it was that home’s lawn where first responders treated two apparent victims, Darlene Dyer said.

“Here we go again,” she thought after the shooting, Darlene Dyer said. “How many times has this happened?”

This is the city's second shooting involving a teenager in as many days. On Sunday night, an 18-year-old victim was shot and killed in Aurora in the 13000 block of East 33rd Place.

Last month, at least eight teenagers were victims in shootings throughout the city:

“Violence involving teenagers and young adults is distressing and is sadly a public health problem in communities across the nation," said Aurora City Manager Jim Twombly. "The safety of young people in our community is a priority and that is why we have joined with other metro communities in working collaboratively to address youth violence as a public health crisis."

"Addressing youth violence is complex," Twombly said. "We believe these efforts combined with robust, ongoing community input will help reduce the impact of youth violence across the region.”

Gov. Jared Polis said in a statement Monday evening he is "so saddened" by the news of the shootings. He said his prayers are with the victims, families and students in Aurora, and he has spoken with Mayor Mike Coffman and offered his administration's support as the investigation evolves.

"Our children need to feel safe in parks, in our schools and parents need peace of mind that their students are safe in our neighborhoods," he said.

Police are asking anyone with information about Monday's shooting to come forward immediately, including neighbors who may have surveillance footage of the suspects involved.

"Any information you have, no matter how small, we need it," Wilson said. "Please."

Anyone with information is asked to call Metro Denver Crime Stoppers at 720-913-7867. Tipsters can be anonymous and are eligible for a $2,000 reward for information leading to an arrest.

Aurora Central High School was put on lockdown immediately after the shooting and then was downgraded to a secure perimeter status. The shooting did not happen on school property.

A school resource officer responded to the shooting and provided a "life saving" tourniquet to the victim who underwent emergency surgery, Wilson said.

Students were released to their parents shortly after 3 p.m. Monday.

School will be back in session Tuesday. There will be increased police patrols in the area in the coming days, Wilson said.