As first reported by Colorado Politics, the first-year congresswoman blocked at least a half-dozen individuals from following her @laurenboebert account on Twitter. Many of those blocked are Boebert's constituents in Congressional District 3.

RELATED: U.S. Rep Lauren Boebert is blocking users on Twitter, which could open door to lawsuits

Attorney David Lane, who is representing Buentello, said in a statement Sunday that Boebert "apparently believes that the Constitution begins and ends with the Second Amendment. Despite her incessant whining about the alt-right being censored on social media, she has a Twitter account and she routinely blocks anyone critical of her authoritarian views.

"Our client, Brianna Buentello, is a former elected state legislator who lives in Boebert’s district and is very concerned that Boebert has no knowledge of, nor concern with, the United States Constitution beyond the notion that somehow everyone can carry guns anywhere they so desire. Boebert has blocked Buentello, along with many other people, who are critical of her authoritarian politics.

Buentello told Colorado Politics Sunday that she has questions — "lots of questions" — about Boebert's service in Congress, what she will do for families, to protect communities or alleviate the COVID-19 crisis.

"The bottom line is that she doesn't seem to be interested in any of that," Buentello said. "She doesn't even seem to be interested in following the rule of law" as it applies to elected officials on Twitter. "She's not above criticism. I know that better than most as a former representative myself. My hope is that she wakes up one day and stops trampling on the First Amendment and stops blocking people."

Buentello added that Boebert seems to think "her election was some kind of crowning." To Boebert, she said, "you're an elected official. If you can't muster up the chutzpah to do the job, you shouldn't do it. If she won't follow the law, I'll do what I can to make sure she does, including taking her to court."

Elected officials, including President Trump, have lost lawsuits for blocking people on Twitter, even when using what's viewed as a personal account. In Colorado, Sen. Ray Scott, a Grand Junction Republican, settled a lawsuit filed by a critic he blocked from his Facebook and Twitter accounts. Senate President Leroy Garcia of Pueblo also settled with a man who was blocked from his Senate President Facebook page.

Boebert has two Twitter accounts; the @laurenboebert account appears to be where Boebert makes all of her public statements on Congress, while the @RepBoebert account mostly retweets posts from the former.

The lawsuit seeks a preliminary injunction to force Boebert to unblock Buentello.

"While trying to teach an authoritarian politician to respect the Constitution is akin to trying to teach a pig to sing – (generally it wastes your time and annoys the pig) – nevertheless, we persist," it reads.

Others blocked by Boebert in the first two weeks of her term include the Colorado Democratic Party, former Democratic U.S. Senate candidate Trish Zornio and Rural Colorado United, a grassroots PAC that has been organizing protests against Boebert in the 3rd Congressional District.

Boebert's chief of staff, Jeff Small, told Colorado Politics that the congresswoman's office would not comment on the pending litigation. 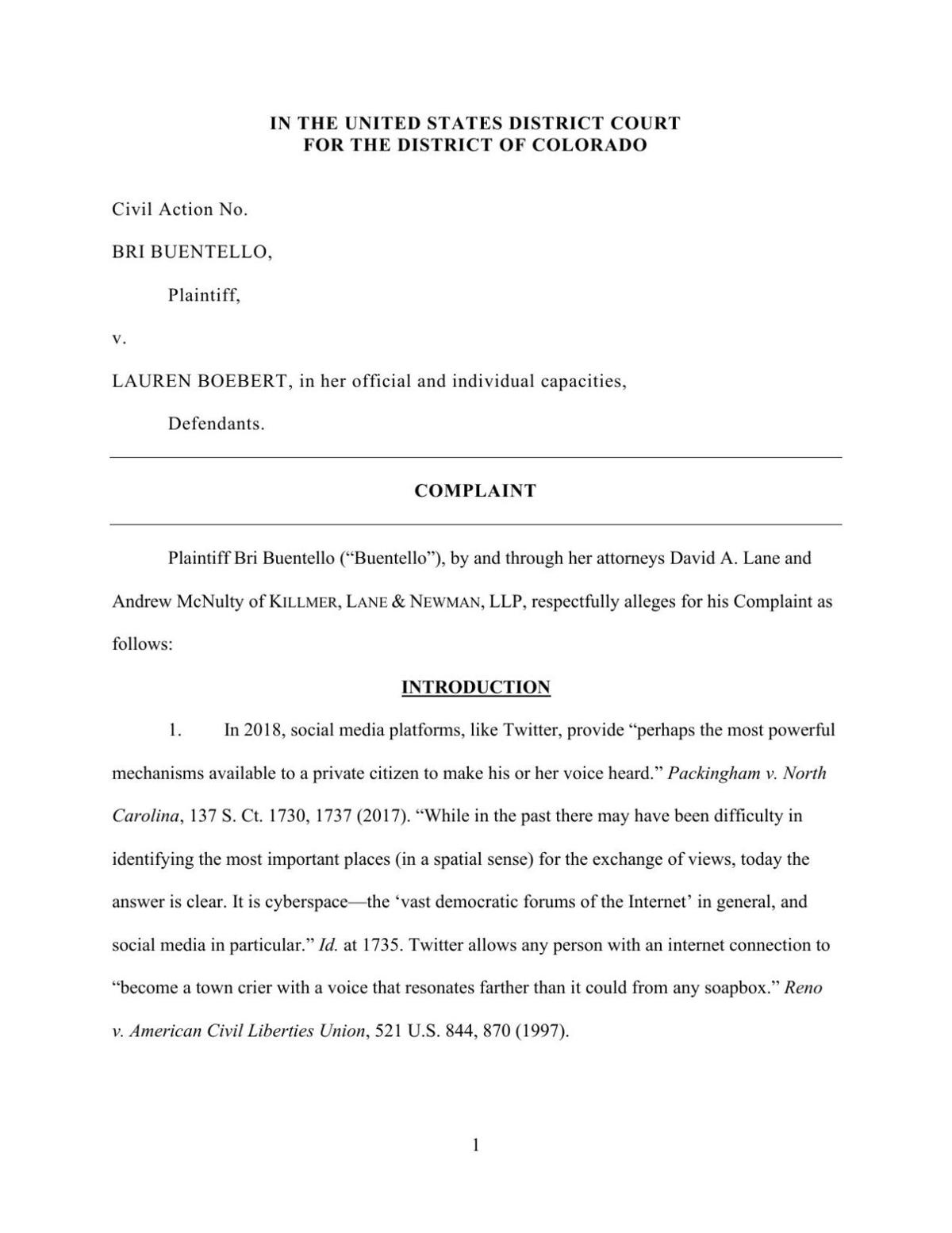 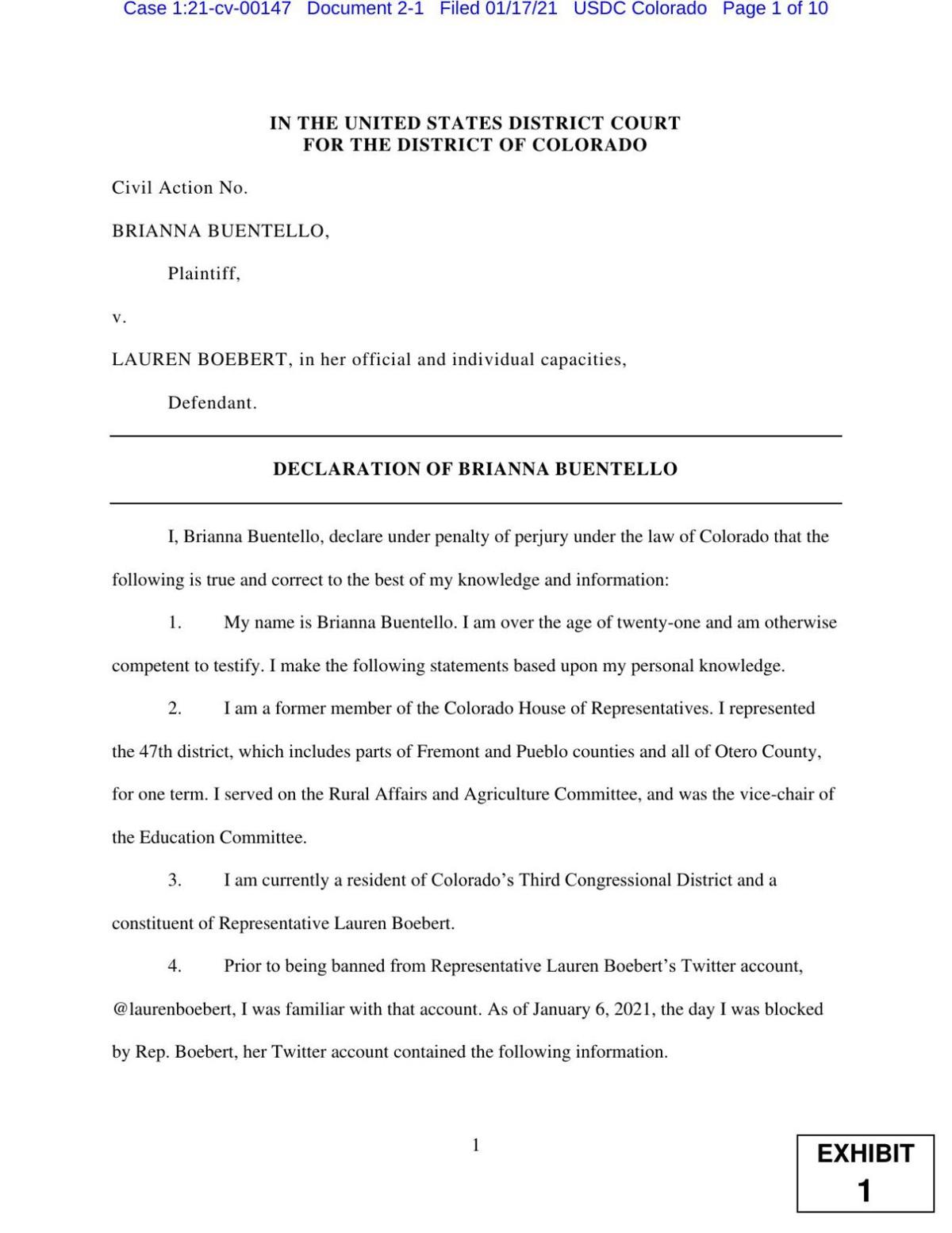 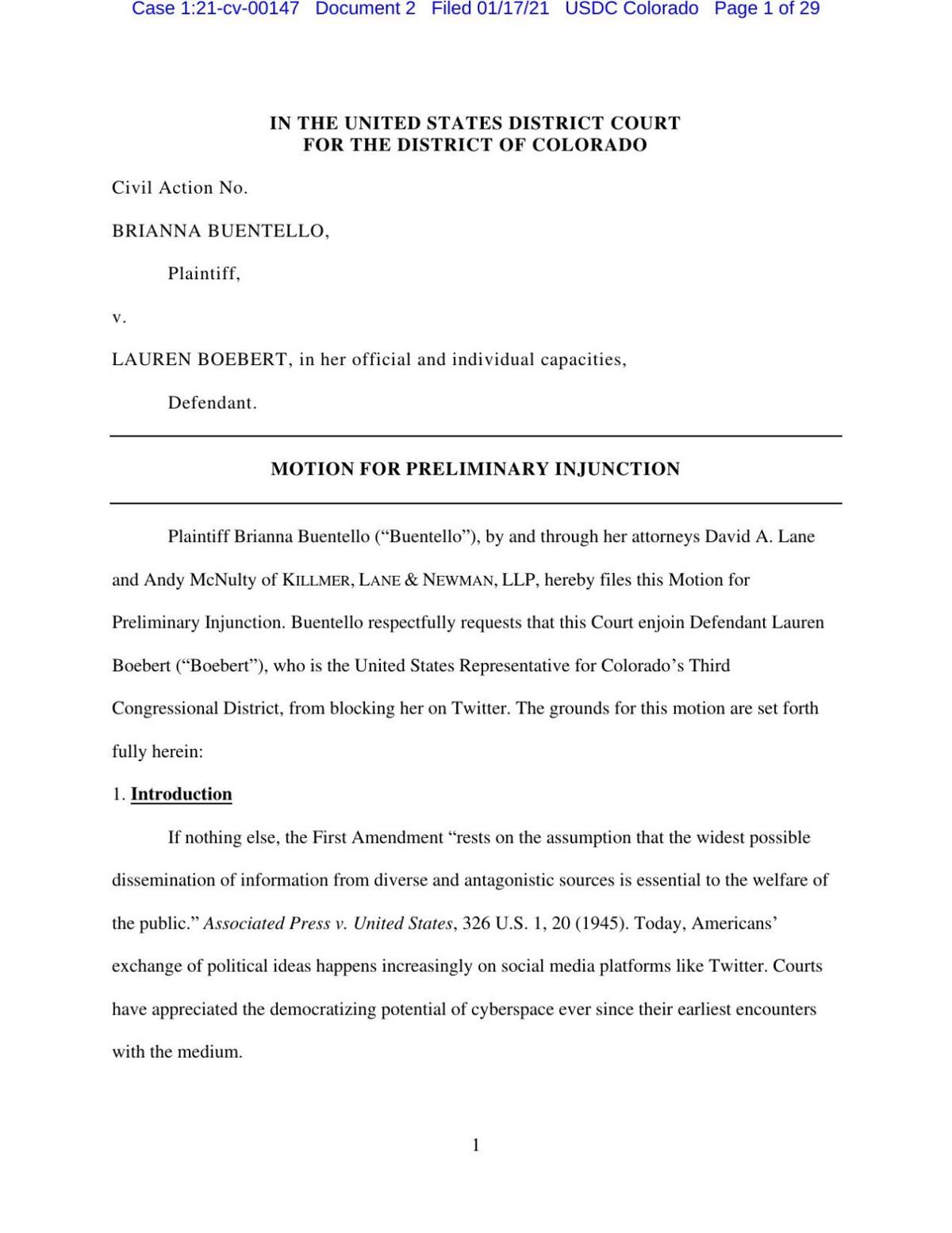 U.S. Rep Lauren Boebert is blocking users on Twitter, which could open door to lawsuits

Several people have notified Colorado Politics that the gun-toting rep has blocked them on her @laurenboebert account, one of two that she holds. The second — @repboebert — appears to primarily retweet posts from the first account.