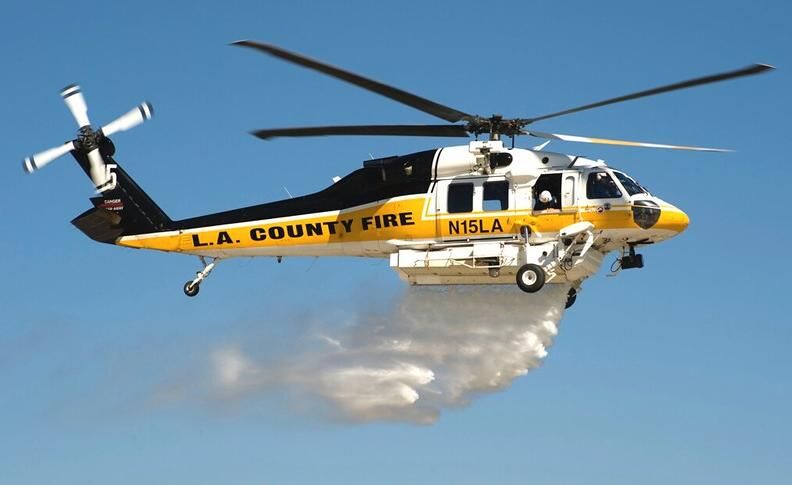 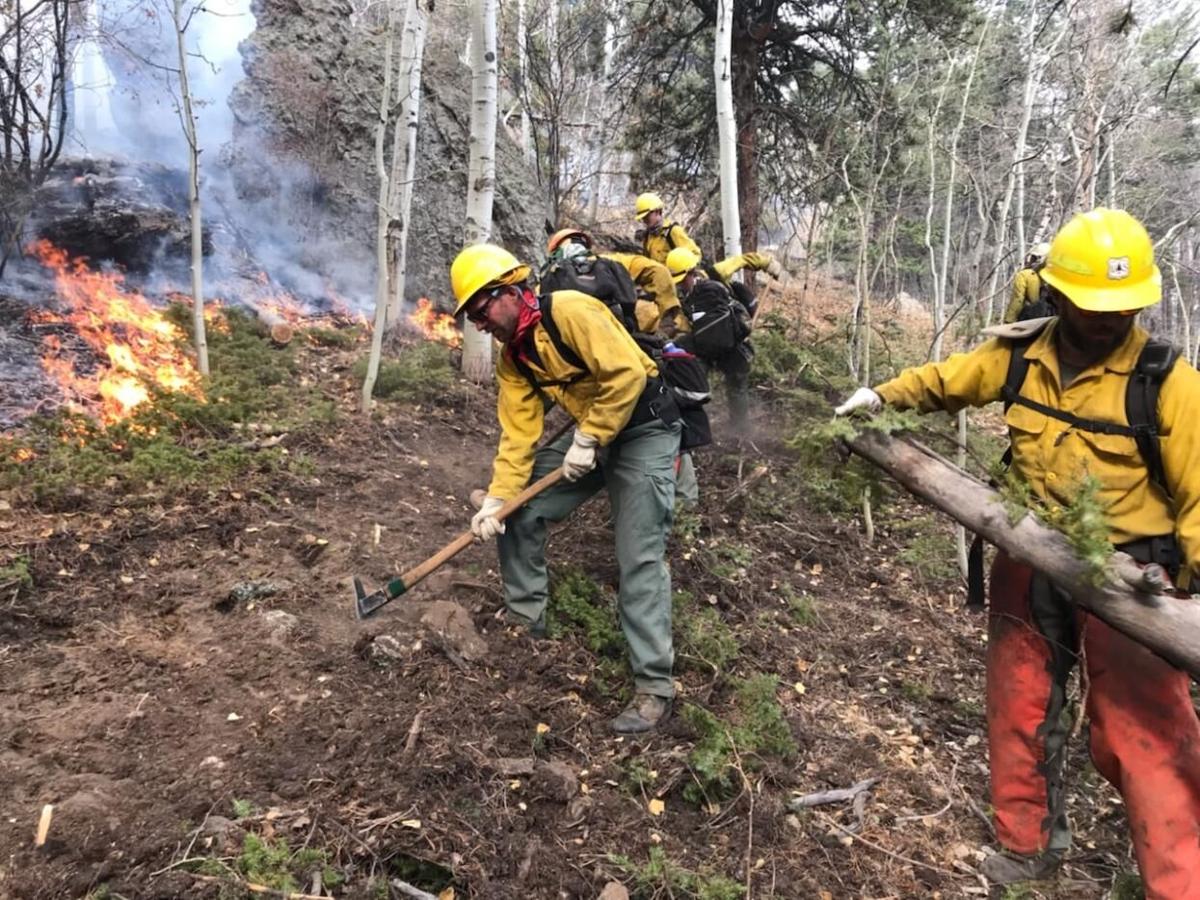 With Colorado coming out of its second worst drought year since 2002 and with scant expectations for a better 2021, the state’s public agency that deals with wildfires is hoping a California solution could help tamp down the biggest wildfires in the years to come.

It’s called the Firehawk helicopter. Its manufacturer, Sikorsky, claims it "can attack fires at night, in strong Santa Ana winds, maneuver with agility and safety in canyons and terrain from sea level up to 10,000 feet altitude, while dropping water with tremendous precision and force.” The Firehawk is a major component of California's firefighting efforts, with a dozen purchased in 2020 alone.

At a cost of $24 million, plus $3.8 million in annual operating costs, Colorado's Department of Public Safety and its division of fire prevention and control can afford just one, but with hopes that more can be added in the years ahead.

It’s the Firehawk's ability to go into rugged and high-altitude terrain that makes it attractive for fighting wildfires in Colorado, according to Mike Morgan, director of the fire prevention division. It could be a “game changer” for firefighting in Colorado, he said.

“Colorado has some of the most extreme terrain,” he recently told Colorado Politics. "There isn’t another helicopter that performs with the same capabilities."

The new chopper is part of the balance that the division has to strike between mitigation and suppression efforts, Morgan said. “We know that mitigation alone will not fix the problem” of Colorado’s expanding wildfire season, he added.

The Firehawk would become part of the division’s tools for the aggressive initial attack on a wildfire. But it's also part of a shift in strategy in fire mitigation and suppression, according to a joint presentation last month among the state agencies that deal with wildfires. The agencies are "moving away from the traditional wildland fire model to have year-round firefighters available for response and fuels projects."

Morgan also told Colorado Politics that the choice of the Firehawk boils down to safety, that it’s been a “tried and true” helicopter for the military and it’s becoming the standard for public safety organizations.

Vince Welbaum, also with the division, noted its water-carrying capacity. The most any of the state’s wildfire-fighting helicopters can carry is about 300 gallons, he said. The Firehawk has a capability of 800 to 1000 gallons.

It also can transport far more firefighters and their gear, up to a dozen, tripling the capacity of most other helicopters used by the state.

The Firehawk’s ability to fly in high altitude helped with the choice. Welbaum said that when a person walks in high elevation, they may have trouble breathing. It’s the same for helicopters, he said.

Morgan and his team pointed out that the helicopter will help solve one of the problem they experienced last year: lack of availability of the Global Supertanker. While the supertanker has been based in Colorado, it was never available during the 2020 wildfire season as it was tasked to fight California wildfires.

“Where that aircraft went was not our decision to make, no matter how badly we needed it,” Morgan said. The Firehawk would be under operational control of the state.

According to Vaughan Jones, also with the division, the helicopter’s primary purpose would be to meet Colorado’s needs. However, firefighting is an interagency business, and the division could allow its firefighting resources to help partners in other states. But the chopper would be on a “short leash,” Jones said. “We have the control to bring it back.”

And it will have uses beyond firefighting, according to the division. That could include helping Colorado Department of Transportation with avalanche or rockslide control. It could help the Department of Natural Resources with wildlife counts, or the Department of Agriculture, which moves hay to livestock stranded on the Eastern Plains during blizzards. It could help local law enforcement and with search and rescue operations.

The chopper is part of a stimulus proposal submitted to the Joint Budget Committee by Gov. Jared Polis.

In their budget presentation, the Department of Public Safety pointed out that contracting for a Firehawk would cost the state $145 million more than purchasing it over a 30-year period. They also pointed to the long lifespan, with some helicopters of a similar type still in service 40 years later.

In a budget document, the division said “there is high confidence that the aircraft will be flown and supported for a minimum of 30 years. An advantage of this make/model of helicopter is that the military uses the same aircraft. Therefore, we can expect the manufacturer (Sikorsky) to support the aircraft for a very long time with components, parts, and engines. In addition, the State would have access to many pilots and mechanics that have flown and worked on similar platforms. This is unlike many other non-military fire aircraft, where there is minimal to no manufacturer support and a small pool of pilots and mechanics familiar with the aircraft.”

The purchase of the Firehawk would take place in this year’s budget, according to the stimulus proposal.

In addition to buying the Firehawk, the stimulus funding would cover exclusive-use contracts for a large air tanker, single engine air tanker, helicopters or other aviation equipment for use during fire season. It would also cover the cost of unmanned aerial systems, updates on radio equipment and matching funds for federal hazard mitigation.

DNR Executive Director Dan Gibbs said during the Jan. 12 joint hearing that based on the 2020 wildfire season, Colorado is "just one drought season, one lightening strike or one unattended campfire away from Colorado's next mega-fire. This is a critical time to invest in our watersheds and protecting our communities." Gibbs, a certified wildland firefighter was called up on several occasions during 2020 to help fight the Cameron Peak and Grizzly Creek wildfires.

"Mitigation and suppression are the only ways to get there," Morgan told the JBC, in describing the stimulus proposal. On average, Colorado has 5,112 fires per year that burn 167,386 acres. That number is expected to grow fivefold by 2050, he told the JBC, acerbated by the expected growth of about three million people in that same period. He also said the state's wildfire season is now 78 days longer they were in the 1970s.

As to the JBC's reaction, the committee appeared supportive of the ability of the Firehawk to be used for multiple state agency needs. However, the committee has not settled on whether it supports buying versus contracting or leasing the Firehawk.

FIRE LINES | Mitigation and suppression efforts in search of money

An occasional series of conversations with experts on the science and policies regarding fires.