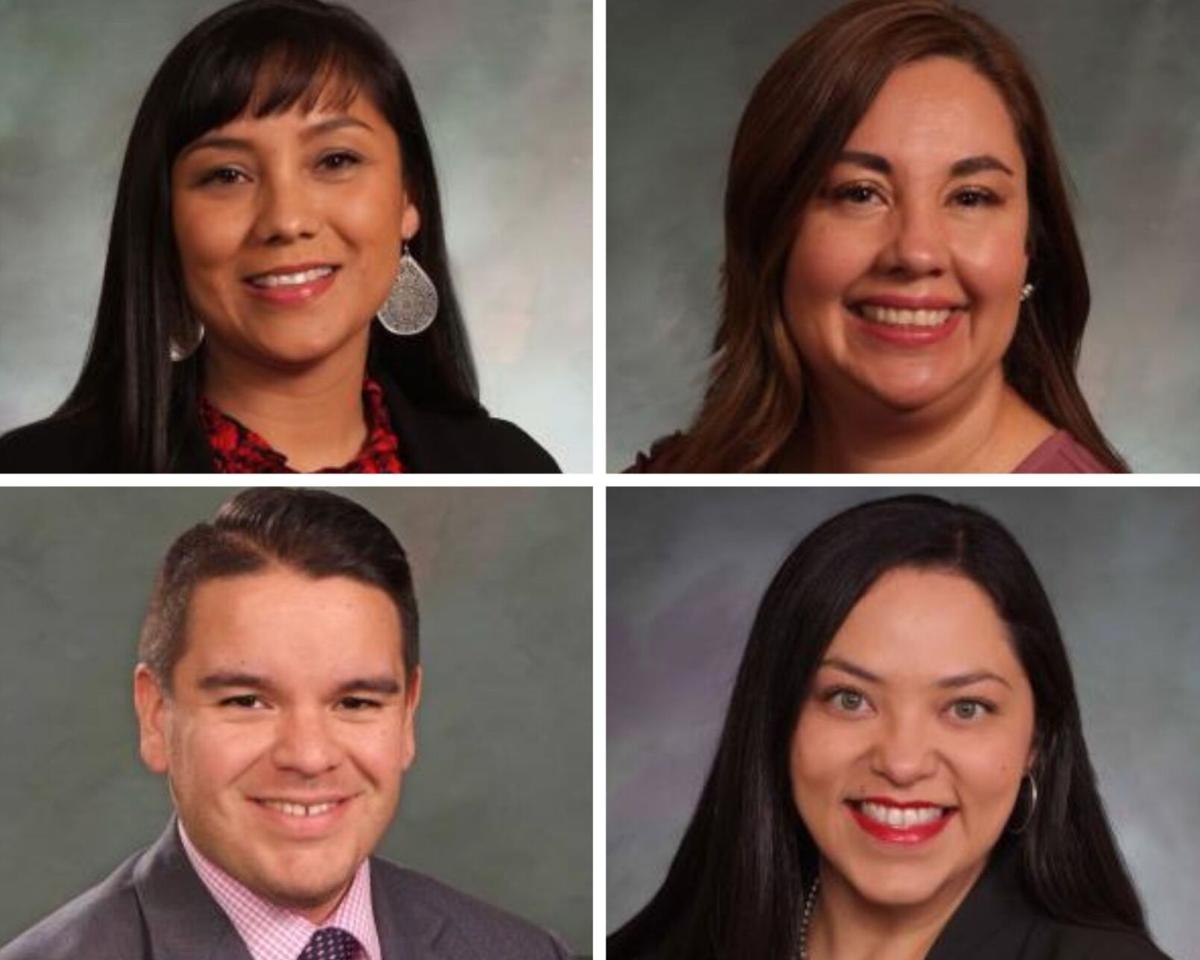 Reps. Serena Gonzales-Gutierrez of Denver and Yadira Caraveo of Thornton and Sens. Dominick Moreno of Commerce City and Julie Gonzales of Denver 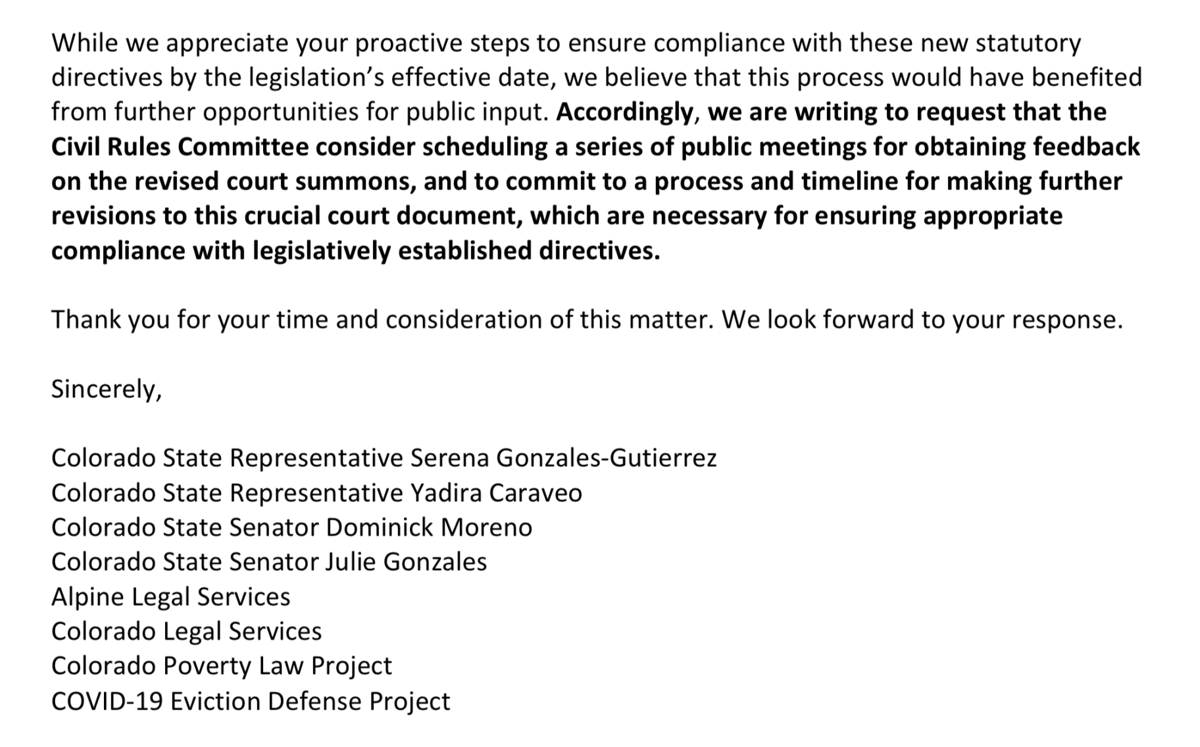 An excerpt from state lawmakers' letter to the Colorado Supreme Court.

State lawmakers who sponsored tenant-friendly changes to eviction protocols earlier this year are concerned that the Colorado Supreme Court did not fully comply with the law when it updated the legal paperwork for renters facing eviction.

On Oct. 29, the seven justices received a letter from four Democratic legislators emphasizing that Senate Bill 173, which the governor signed into law in June, was meant to clarify the rights and responsibilities of renters in the eviction process. A key portion of the legislation touched on the court summons issued to a tenant in response to a landlord's filed complaint.

"To that end, we are concerned that the revised court summons fails to convey information regarding a defendant’s required participation, opportunities for fee-waiving, and other essential due process rights, in a manner that is clear and understandable to many members of the general public," read the letter.

The bulk of SB 173 comprised tenant-rights provisions about late fees that landlords may charge and remedies if a unit is not habitable, among other features. But the issue for the bill's sponsors was the new rules of civil procedure for evictions the Supreme Court adopted in October. Those were based on a judicial task force's work to get tenants to more knowledgeably respond to a landlord's eviction complaint, and dovetailed with part of the new law.

A 2017 report from the Colorado Coalition for the Homeless and the Colorado Center for Law and Policy found that while landlords had legal representation virtually every time in nearly 1,200 eviction proceedings reviewed in Denver, tenants were represented only 2% of the time. Earlier this year, the Denver City Council approved a $4 million eviction legal defense program for low-income renters, pointing to those disparities in representation.

The results of a similar initiative in New York City suggest that rates of tenant representation affect their likelihood of remaining housed. The city saw a 41% drop in residential evictions from 2013 to 2020, while legal representation rose from 1% of renters who appeared in housing court in 2013 to 38% by 2020.

In that vein, the sponsors of SB 173 cited a desire to inject fairness into the eviction process, in part by improving self-represented tenants' ability to respond in court.

Meanwhile, the judicial branch was undertaking a similar project. According to a March 16 memorandum from Court of Appeals Judge Lino S. Lipinsky de Orlov, a task force originally began exploring eviction protocols and paperwork independently of the General Assembly in March 2020. The objective, he wrote, was to reduce the occasions "in which a defendant has a meritorious defense but nonetheless loses the case by default because he or she lacks sufficient knowledge of the legal system to present that defense to the court."

The problem is not unique to Colorado. In voiding a 2013 agreement for a tenant to surrender possession of her apartment, an Illinois appellate court found the renter had not understood what she was agreeing to.

"Countless tenants, confused and pressured in court, sign orders presented to them by the landlord’s attorney that they may not understand requiring them to leave their homes," observed an essay from faculty and students at the Chicago-Kent College of Law in response to the ruling.

As adopted, the uniform summons paperwork in Colorado now contains a list of legal and housing resources pursuant to SB 173. Among the more basic changes was the addition of the word "eviction" to the summons, which previously listed only the legal phrase for an eviction: forcible entry and detainer.

Several other revisions to the paperwork put instructions in plain English. For example, instead of directing tenants to describe the "grounds upon which you base your claim for possession and denying or admitting all of the material allegations of the complaint," the summons now tells those being evicted to state "Why you believe you have a right to remain in the property" and "Whether you admit or deny the landlord's factual allegations."

But the lawmakers and legal aid groups believed the judicial branch should have sought input from the public and made further changes in line with the law.

The revised summons fails to note SB 173's requirement that courts will enter automatic judgment in favor of the landlord only if tenants do not appear by the end of the day of their scheduled appearance, rather than by a particular time. That requirement, though, appears to be in conflict with another bill the governor signed this year mandating language about the specific date and time of a court appearance.

The letter also suggested that the use of the phrase forcible entry and detainer on the court summons is "foreign to most non-lawyers."

"We are concerned," the letter continued, that the court's revisions have "insufficiently fulfilled the General Assembly's intent in passing the legislation and has failed to comply with the dictates included in the new statutory language."

The Supreme Court's Committee on the Rules of Civil Procedure has placed the letter on the agenda for its Nov. 12 meeting.