A federal judge in Denver on Monday afternoon ordered lawyers who filed a sprawling lawsuit to raise doubt about the 2020 presidential election to pay the attorneys' fees for those they accused.

Denver attorney Gary D. Fielder and Ernest John Walker, who practices in Michigan and Colorado, filed a class-action lawsuit challenging the results of last year's election and sought to recoup damages and donations to fund the case, capitalizing on supporters of President Donald Trump.

Subsequent testimony convinced U.S. Magistrate Judge N. Reid Neureiter that the lawyers had done little or nothing to verify their claims of a stolen election.

He ordered the pair to to pay a total of $186,952.50 in legal fees for five sets of defendants in the original lawsuit:

Fielder nor Walker could not be reached immediately for comment Monday evening. They had sought to limit awards to $10,000 for Facebook, CTCL and Dominion. 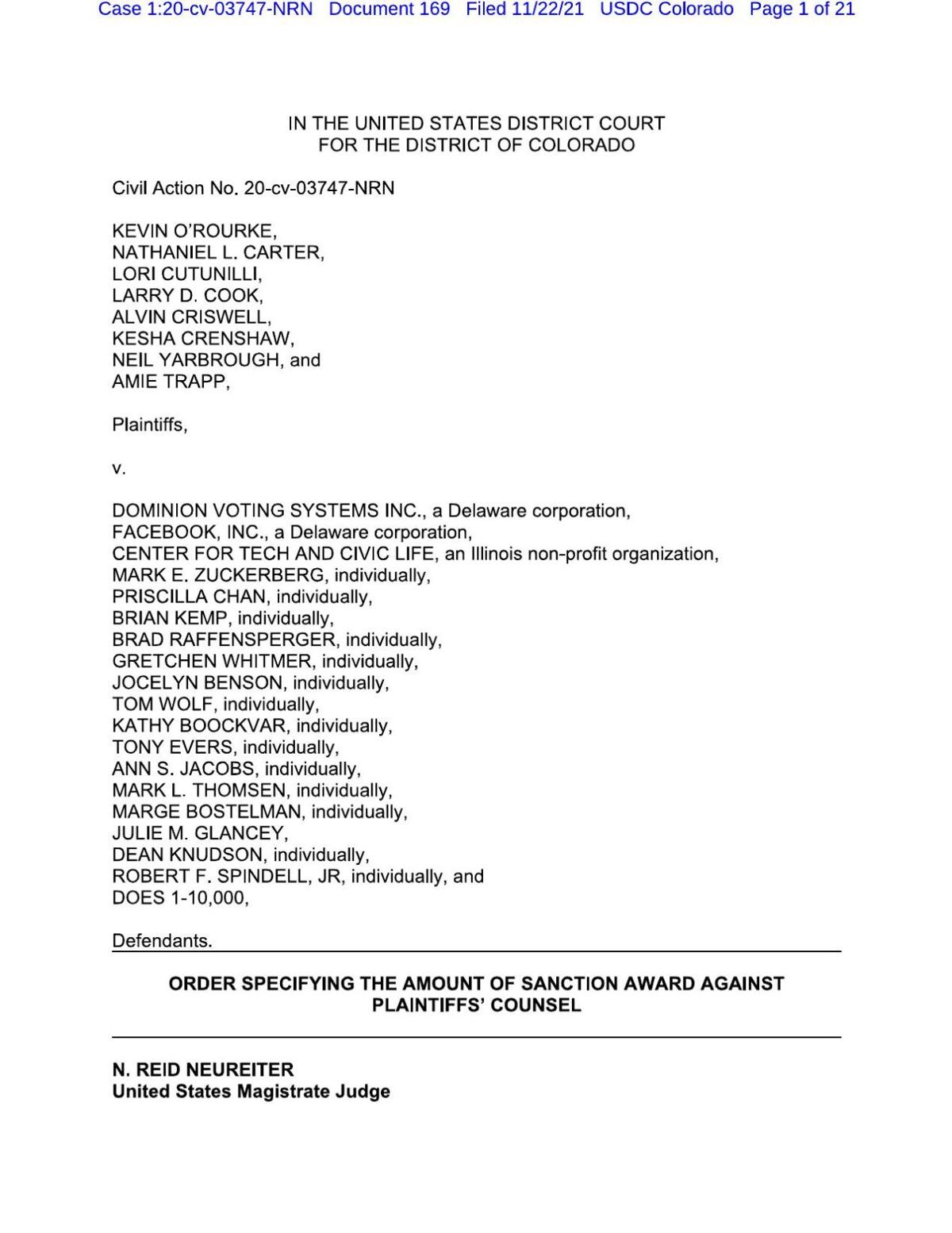 As he did during oral arguments, Neureiter took a scolding tone in Monday's order.

"I also take into account the risk that this substantial sanction might chill zealous advocacy for potentially legitimate claims," he concluded. "But I conclude that the repetition of defamatory and potentially dangerous unverified allegations is the kind of 'advocacy' that needs to be chilled. Counsel should think long and hard, and do significant pre-filing research and verification, before ever filing a lawsuit like this again."

Fielder and Walker filed the original lawsuit purportedly on behalf of all registered voters and sought $160 billion in damages. Their claims of election fraud repackaged the types of conspiracy allegations that other courts have thrown out since November 2020.

Neureiter previously slammed the pair for failing to properly investigate their claims and acting in bad faith, calling the lawsuit "the stuff of which violent insurrections are made."

"This was not a client-generated lawsuit," Neureiter wrote in his Monday order. "This is exclusively a creation of the Plaintiff’s counsel. They are experienced lawyers who should have known better. They need to take responsibility for their misconduct."

He added that Fielder and Walker's lawsuit may have served to "manipulate gullible members of the public and foment public unrest."

The magistrate judge's decision to dismiss the lawsuit is on appeal to the U.S. Court of Appeals for the 10th Circuit. In a YouTube video posted on Sunday, Fielder defended the lawsuit as legitimate and foreshadowed election-related violence.

Fielder also mentioned that around the time he filed the lawsuit, "I thought we were a breath away from a civil war. And now, I don't see how that's going to be avoided."

The attorneys have noted on the lawsuit's website that they have "temporarily" suspended it and "look forward to restoring it soon."

"Defendants made, published, ratified, endorsed, adopted, and amplified attacks on Dominion that they knew were false or acted with reckless disregard for their truth or falsity," Dominion's attorneys wrote.