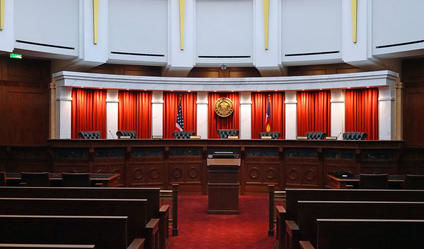 Welcome to Court Crawl, Colorado Politics' roundup of news from the third branch of government. The state Supreme Court issued a key decision involving the state's obligation to children who are eligible members of an Indian tribe, and appellate courts reversed several convictions out of Arapahoe County.

What is Colorado's obligation to Indigenous children?

•  The Colorado Supreme Court last week issued a major decision involving custody proceedings for Indigenous children. The Indian Child Welfare Act, which Congress passed four decades ago amid high rates of tribal children being removed from their households, allows Indian nations to take part in child welfare cases. But what if the children involved are only eligible to be tribal members, and not yet enrolled?

•  "ICWA simply does not apply when the children before the court are not Indian children," wrote Justice Richard L. Gabriel for the Supreme Court. In other words, there is no legal obligation for Colorado's counties to help children enroll as tribal members.

•  While not the prevailing view, Chief Justice Brian D. Boatright believed counties should be required to educate parents about the advantages of tribal membership and assist in enrolling them.

•  The Supreme Court ruled 6-1 that an Arapahoe County judge could not decide after the fact that he had declared a mistrial due to COVID-19. Although mistrials allow the state to extend its six-month deadline to bring a defendant to trial, retroactive mistrial declarations don't count.

•  There is an established protocol for handling a defendant's claim during jury selection that the prosecution is excluding someone from the jury based on their race. But an Arapahoe County judge (now-Justice Carlos A. Samour Jr.) didn't adhere to the process, and the Court of Appeals reversed the murder conviction and lifetime sentence for the defendant as a result.

•  The Court of Appeals also found fault with another judge who made a defendant choose between letting the jury listen to an altered video of his arrest (which made him seem more guilty), or letting them see the full video but also hear about his prior convictions.

•  The state Supreme Court agreed to review two notable cases: whether the El Paso County sheriff could be sued for intentionally detaining people at the request of immigration authorities far beyond the normal window, and whether the state's arson statute allows someone who sets a single fire to be convicted based on the number of buildings, people and property endangered.

•  Next month's oral argument schedule features cases about Medicare and Medicaid billing, the legal deadline for restitution and organized crime.

•  Our partners at The Denver Gazette are reporting on the monthlong trial of one of the alleged murderers of STEM School Highlands Ranch student Kendrick Castillo in May 2019. Last week, the court seated a jury and held opening statements.

•  The governor has also chosen Kristan K. Wheeler, a magistrate in the 17th Judicial District, to fill a county court judgeship in neighboring Jefferson County. She will succeed Judge Thomas E. Vance on July 1.

•  An inmate filed an excessive force claim against prison officials and asked for the surveillance video. The Colorado Department of Corrections responded that they had erased it. A federal court found the department should have retained the footage, and believed the inmate should be able to raise the issue at trial.

•  The Court of Appeals decided Denver Public Schools did not violate its collective bargaining agreement with the teachers union by excluding its representatives from investigatory meetings, but lawyers for the union decried the ruling and its impact on teacher misconduct investigations.

To secure a drunk driving conviction, Arapahoe County prosecutors relied on a misleading, redacted video, which the trial court judge improperly used to create leverage over the defendant, the Court of Appeals decided on Thursday in overturning the conviction.