While there are now early signs that the novel coronavirus pandemic could be approaching a peak in reported cases, one area shows no signs of slowing: outbreaks at non-hospital health care facilities, such as nursing homes, assisted and senior living residences and rehabilitation centers.

On April 5, one month after the first reported case of COVID-19 in the state, the Colorado Department of Public Health and Environment listed 37 facilities in nine counties with outbreaks.

Just over a week later, the number has more than doubled to 80, including facilities reported by Denver, El Paso and Jefferson counties that are not yet on the CDPHE list. Fifteen counties now report at least one facility with a COVID-19 outbreak. Arapahoe County has the most, with 16.

That includes Juniper Village in Aurora, a memory care center, which made headlines over the weekend with an outbreak that has killed five and another three deaths from COVID-19 suspected. Out of the facility’s 49 residents, 33 have tested positive for COVID-19; out of the facility’s 25 staff, 16 have the virus.

The total number of deaths at nursing homes and other facilities has not been reported by the state, although that information is due to be released for the first time Wednesday.

Colorado’s death toll from COVID-19 exceeded 300 on Monday. The majority — 239 — are those ages 70 and up, according to CDPHE. About one-third of those 70 and older are hospitalized, but that doesn’t include those who are sick but not sick enough to be hospitalized and are at a non-hospital health care center.

Polis, when asked what the state is doing about these rising number of outbreaks last week, pointed to the executive order issued on March 11 that restricted visitors to the facilities.

But the outbreaks have spiked just in the past week, and when asked about it again on Monday, the governor again pointed out the limits on visitors. He acknowledged that the fatality rate for COVID-19 at nursing homes is higher. “We know many of the most vulnerable live in long-term facilities,” he said Monday.

He added that CDPHE is working with operators on infection control strategies, such as closing off building wings with infection. Facilities check the temperatures of their workers and others who come into the buildings, he said.

“Additional steps will be taken,” Polis said. “We’re doing our best to keep those facilities safe.”

He wasn't more specific than that, despite repeated questions.

At Centennial Healthcare in Greeley, a skilled long-term nursing home, 14 of its residents have died from COVID-19. Fifteen other residents have tested positive.

The Greeley Tribune reported on Friday that 14 of the 15 are being isolated at Centennial and one is hospitalized. A statement from Centennial said they’ve increased communication with resident representatives, staff, families and partners as a result of the outbreak.

Neither Centennial nor Juniper Village disclose on their websites that they’ve had COVID-19 outbreaks. It’s more unusual for a facility to make that disclosure than not, based on a check of two dozen facilities on the state’s outbreak list.

Avamere Transitional Care and Rehabilitation Center in Brighton does better than most. While it hasn’t disclosed that it has had COVID-19 at the facility on its website, the site does provide a wealth of information about the virus, along with links to public health agencies in the nine states in which it operates. It also posts, in giant red letters, NO VISITORS.

Jeanine Genauer, a spokeswoman for Juniper Communities, which operates Juniper Village, said if there’s an issue, they do call the families, but “no one’s going to post it publicly” on a website. Cases are reported to the agencies that require it, she said. Juniper Village doesn't mention COVID-19 at all on its website, not even the state ban on visitors.

In a March 12 news release, RiverPointe Senior Living, a high-rise senior apartment building in Littleton, said it had no cases. RiverPointe showed up on the CDPHE list on March 31. The website hasn’t been updated since March 12.

Someren Glen in Centennial was among the outliers. It has provided information, including town halls, on its website every few days, that also reports the number of cases among residents and staff, and even disclosed when there have been deaths. Columbine Manor in Salida also disclosed that it had positive cases among residents and staff, and three deaths, as of April 10.

Doug Farmer, president of the Colorado Health Care Association, of which nursing homes and other non-hospital health care facilities are members, thinks the reason is not one of transparency, but of privacy.

"These are health care facilities or people's homes," he said Monday. "Reporting any kind of illness with specificity could violate privacy rights," and he said there's been sensitivity about that issue at CDPHE as well.

Testing, PPE at a premium

One of the issues pointed out by the facilities themselves is the lack of personal protective equipment, whether it’s masks, gloves, gowns or other gear, and the lack of testing.

At Juniper Village, everyone got tested because the owner, Juniper Communities, ordered it.

Genesis Healthcare systems operates 400 facilities in 26 states, including at least eight in the Denver metro area and in Colorado Springs. To date, one facility — PowerBack Rehab in Lakewood — has been identified as having a COVID-19 outbreak by the Jefferson County Department of Public Health.

The Genesis website said they have adequate PPE — standard face masks, gowns, gloves and N95 respirators — by “shifting supplies among our facilities and resourceful sourcing. We have also been following Centers for Disease Control and Prevention (CDC) and U.S. Food and Drug Administration (FDA) recommendations to re-use and extend the use of face masks. However, as this pandemic expands, this is not a sustainable solution,” the Genesis statement said.

They also asked for more help from the federal government and state public health departments “to ensure that testing is available and test results are prioritized at nursing homes. We are seeing some states take welcome action on this front for nursing home residents, patients and workers, such as Massachusetts, Maryland and Rhode Island.”

Polis said the testing is being done on a facility-by-facility basis. Some of the facilities are run by chains, which means some have access to testing and others don’t.

But he insisted that these facilities are a priority for PPE, just not a top one. Medical personnel in the hospitals are at the top, and in the next tier are those who work with the most vulnerable — the non-hospital health care sites.

Farmer confirmed that his members do not have enough access for PPE, a problem both at the national and state level that has been known for several weeks.

But the competition for PPE between hospitals and non-hospital facilities isn't really a matter of priority.

"I'm not sure it's the most efficient system in the world," said Julie Lonborg, vice president for communications at the Colorado Hospital Association. When a facility — whether a nursing home or a hospital — needs PPE, a request is submitted to the local public health agency. When those supplies come in — and Colorado has been getting small batches from the strategic national stockpile — the supplies are parsed out through that local agency.

For now, everyone is in conservation mode as it applies to PPE, Longborg said. That means reusing as much as possible to save supplies. "We knew the supply chain would be unreliable," she said. 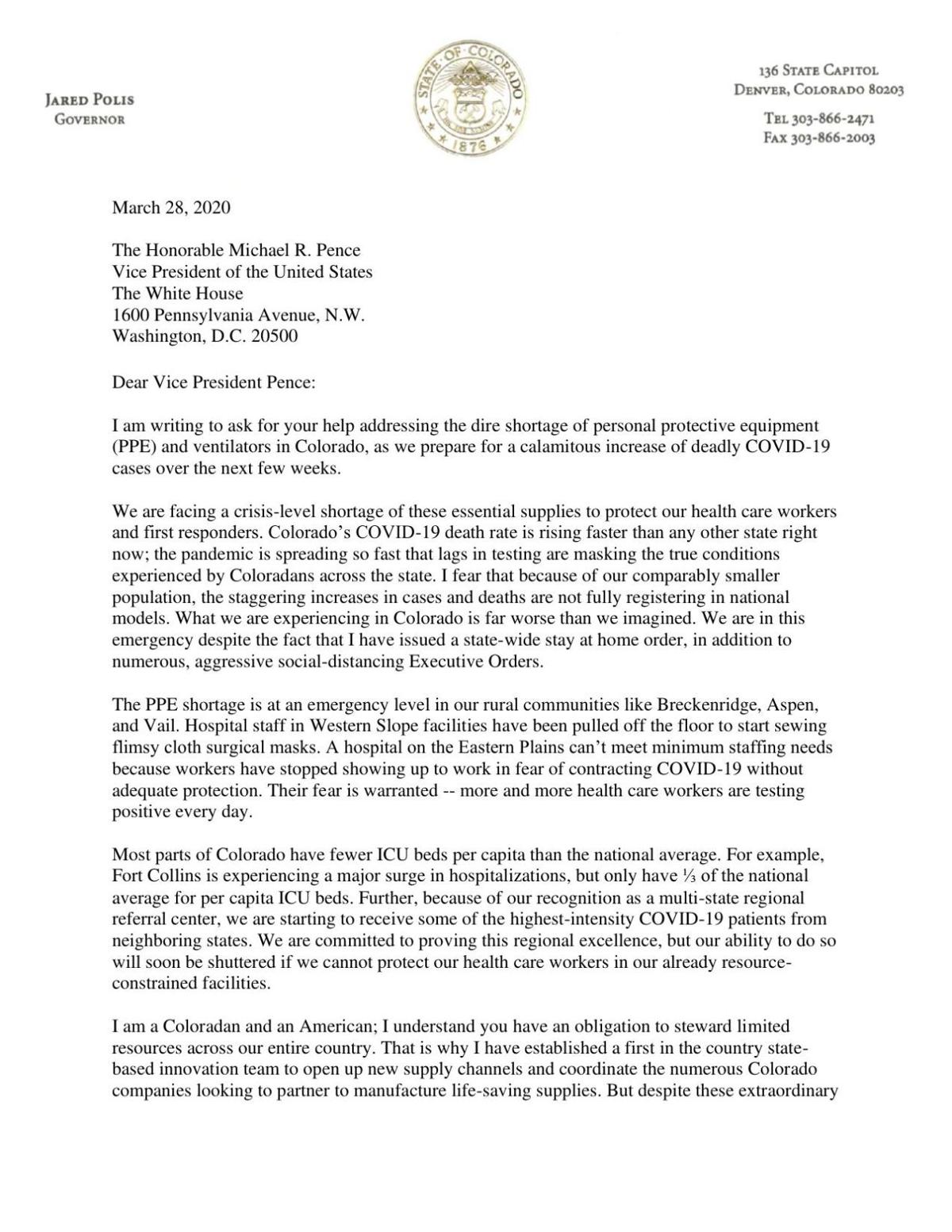 In a March 28 letter to Vice President Mike Pence, Polis wrote that Colorado faces a “crisis-level shortage of these essential supplies to protect our health care workers and first responders ... . The PPE shortage is at an emergency level in our rural communities like Breckenridge, Aspen, and Vail. Hospital staff in Western Slope facilities have been pulled off the floor to start sewing flimsy cloth surgical masks. A hospital on the Eastern Plains can’t meet minimum staffing needs because workers have stopped showing up to work in fear of contracting COVID-19 without adequate protection. Their fear is warranted — more and more health care workers are testing positive every day.”

The letter didn’t mention the need for PPE for second-tier facilities.

AAA announces 20% refund for Colorado drivers amid drop in travel

"As many Coloradans face financial hardship during these challenging times, we hope this refund can help provide a measure of relief at a time when our members may need it most,” said AAA spokesperson Skyler McKinley.