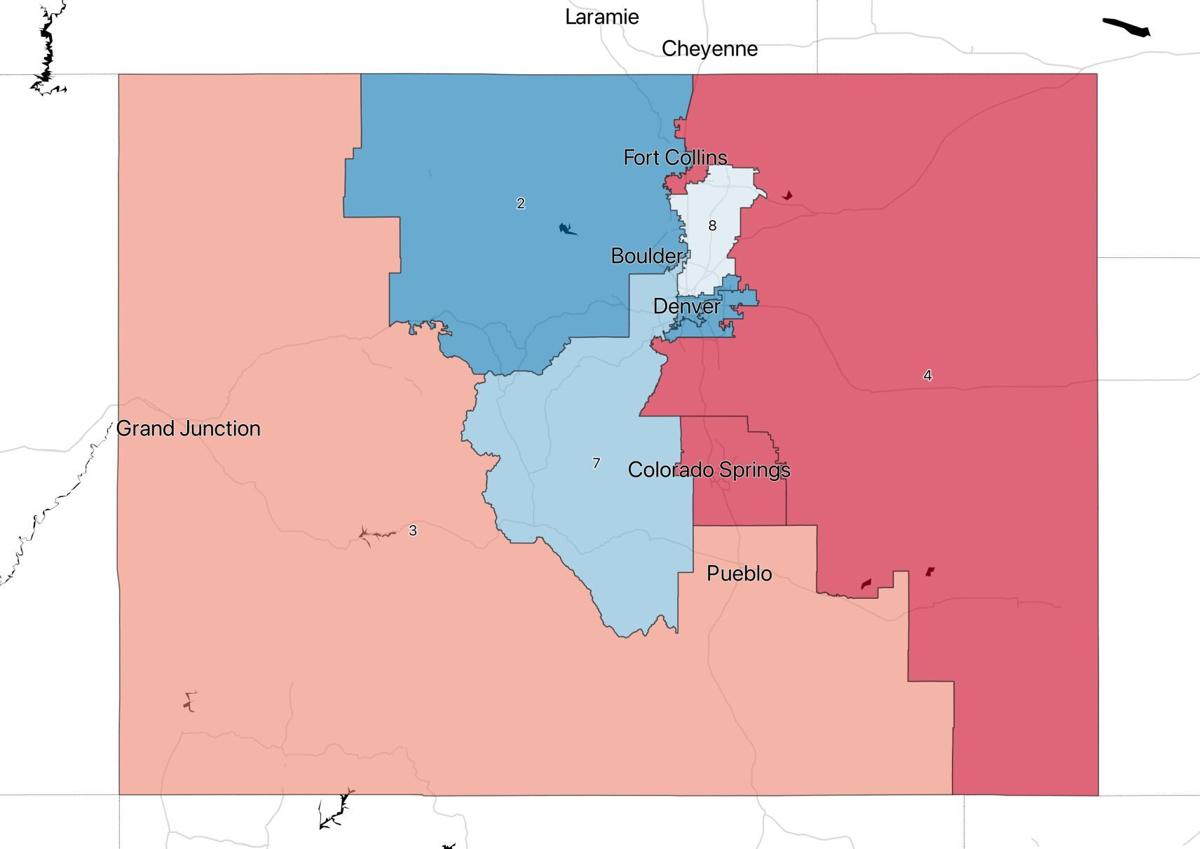 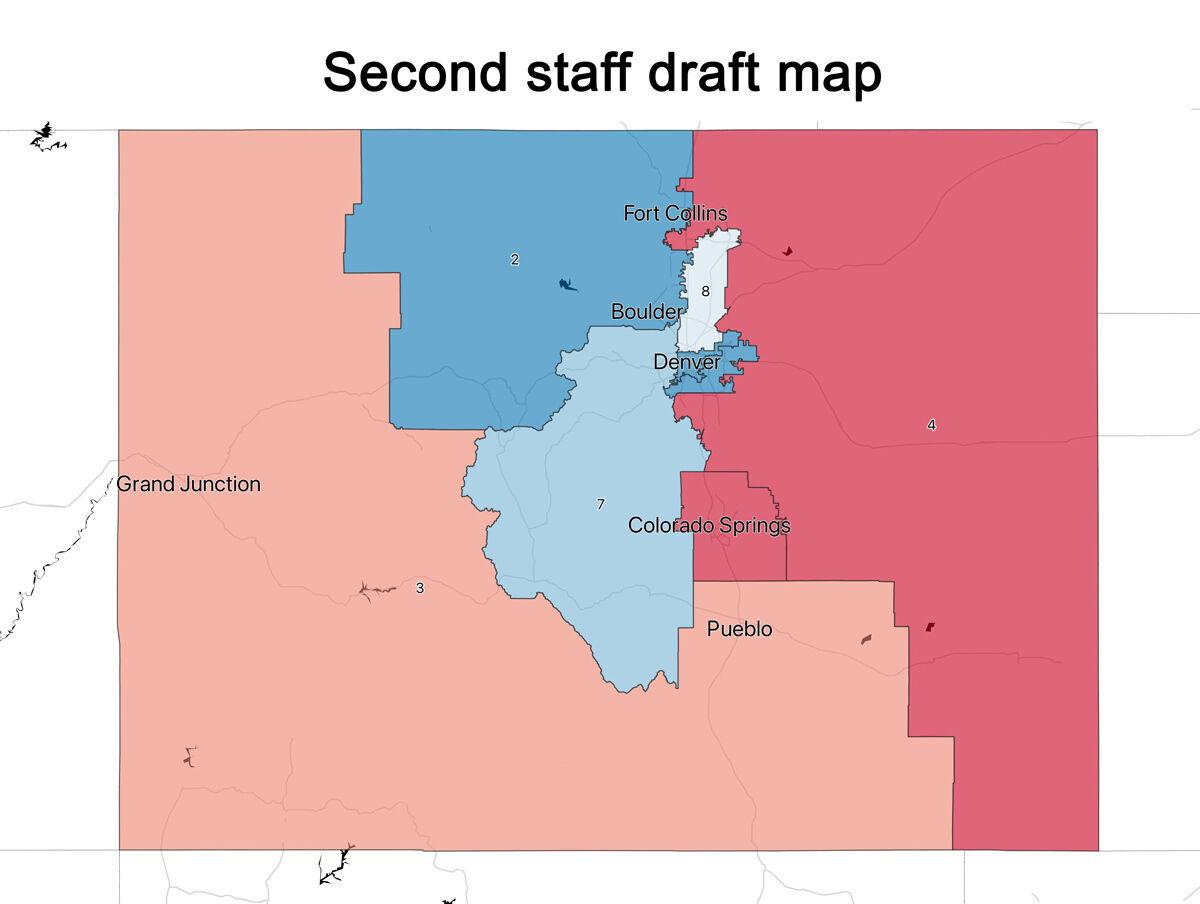 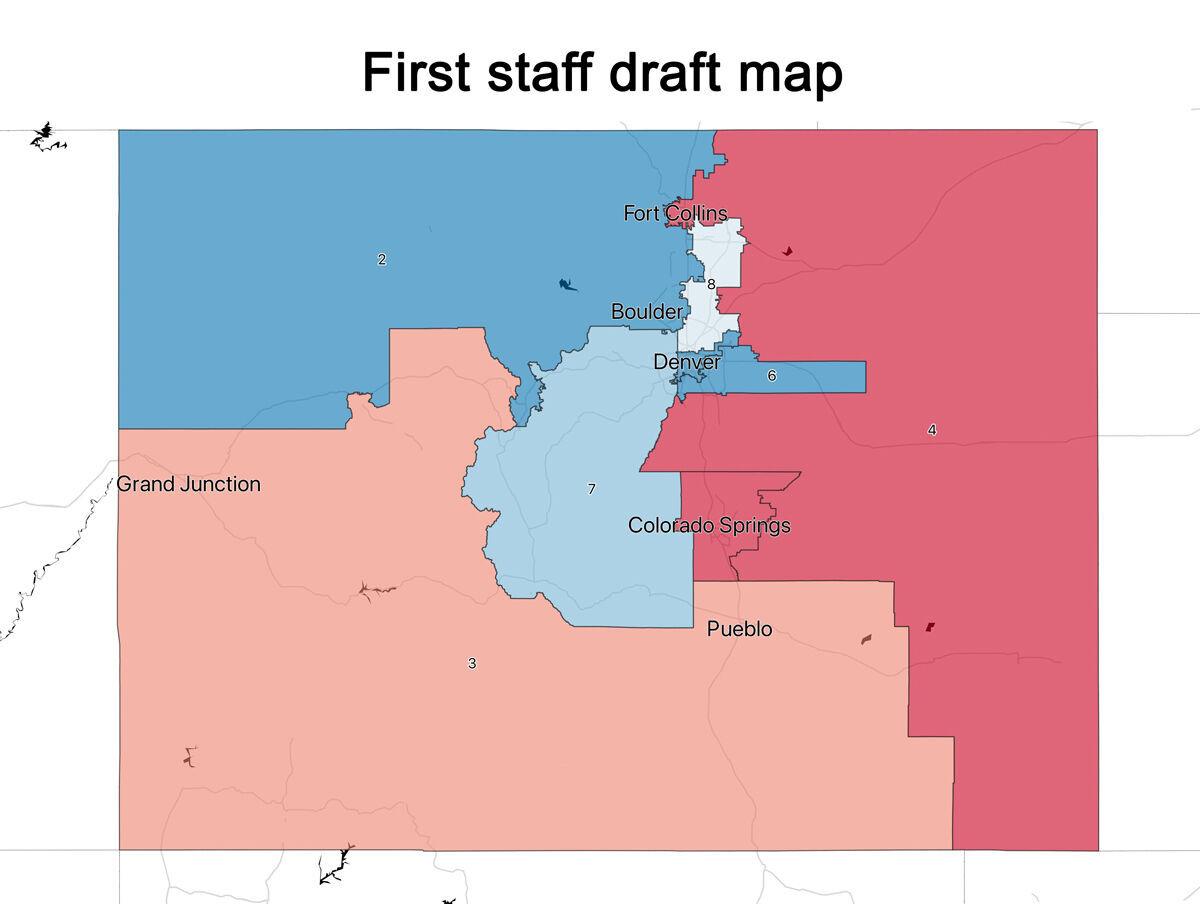 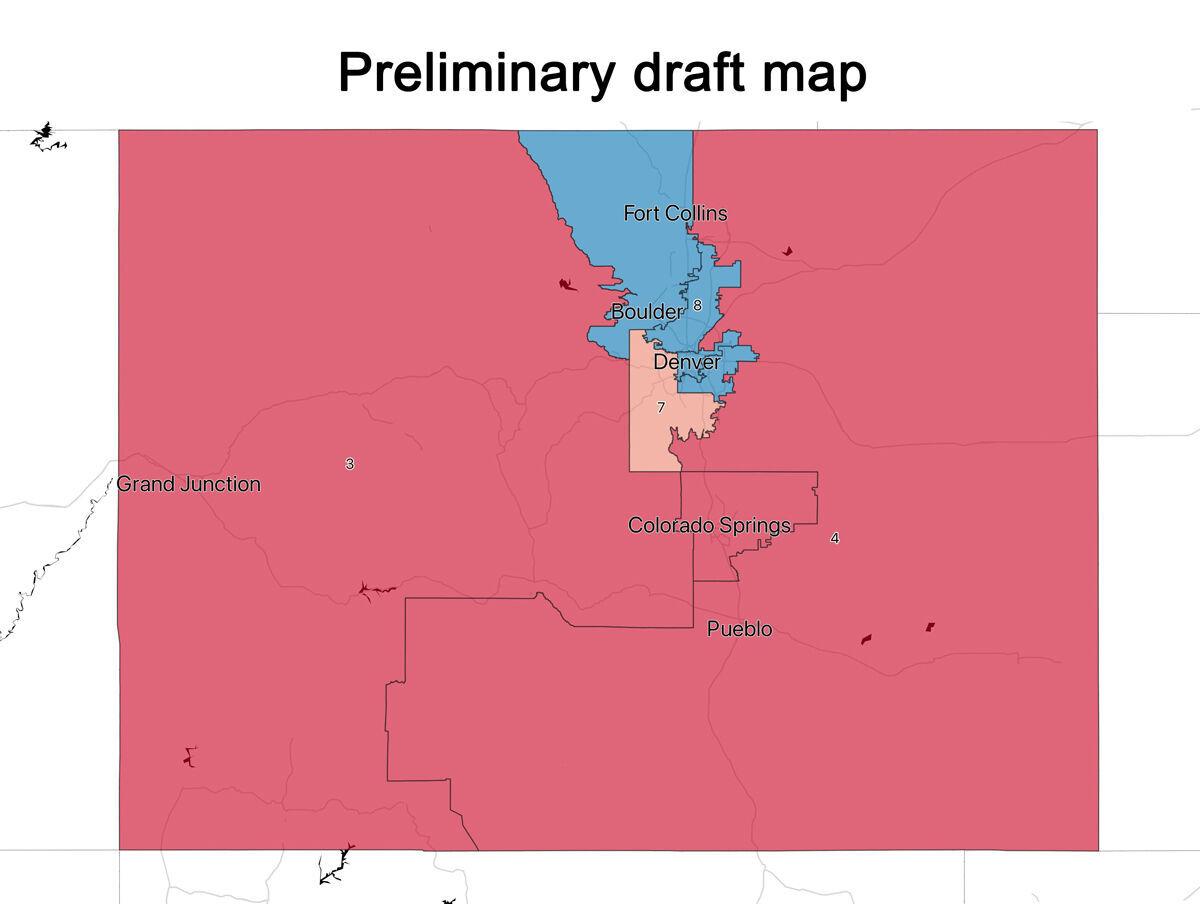 Colorado's congressional redistricting commission has released the latest in a series of new eight-district congressional map proposals, but this one could end up being the map used for the next decade.

The commission can still offer, discuss and debate other map proposals. But if by Tuesday they can't agree on one — and the state constitution requires the support of at least 8 of the 12 commissioners, including at least 2 of unaffiliated commissioners to select a final map — the map released Thursday will be the one adopted by default and submitted to the Colorado Supreme Court for review, approval and adoption.

Their "third staff plan" draft map, released Thursday, follows a "preliminary" draft map released in June, and two subsequent "staff plans" released in the past several weeks that reflect the direction of the commissioners and the public input they've received over the past few months.

The new draft map is built around a few key concepts, which the commissioners and their staff have refined in the most recent iterations.

The new 8th Congressional District, earned by Colorado's booming population, has been drawn to include the suburban areas stretching from the northern edge of Denver, north through Adams County and into parts of Weld County, including Greeley. The new district was designed to keep areas with significant Hispanic populations together, in an attempt to prevent diluting their voting power, and the newest configuration has 38.5% Hispanic population. The district's current configuration would fall into the partisan range that is often considered competitive, but with a likely slight Democratic lean. A combination of results from eight previous elections used by the commission to gauge partisanship shows a 1.3 percentage point Democratic lean, and the two-way party registration figures favor Democrats by about 5 percentage points.

The latest map also reflects a desire to similarly empower Hispanic Coloradans in southern Colorado by grouping together the pockets of areas with significant Hispanic populations in an expansive L-shaped district that stretches from the northwestern corner of the state south to Four Corners and east to include Pueblo, Otero and Las Animas Counties on the district's eastern edge. It includes the San Luis Valley and some of the High Rockies, like Gunnison County, Pitkin County and parts of Eagle County. The district would have a 9-to-10 percentage point Republican lean, based on previous election results and party registration.

The approach was dubbed the "southern district" concept by the commissioners and has been a focus of consternation among the commissioners, after the preliminary draft was largely designed around creating two large rural districts that split the Colorado's non-urban areas into one expansive Western Slope 3rd Congressional District and another expansive Eastern Plains 4th Congressional District. As drawn in the latest version of the maps, the state's rural areas are split into four districts.

Alan Philp, a Republican political consultant and registered redistricting lobbyist for Colorado Neighborhood Coalition, a 501c4 organization that doesn't disclose its donors, has advocated for the "two rural districts" approach, and lamented the splitting of rural areas. He also said he had hoped to see a one or two more competitive districts, but that the newest map seems to be a compromise.

"I don't think anyone is thrilled with the map," he said, "but I think it's in a sweet spot where everyone can swallow hard and live with it."

"To their credit, the staff's plan didn't abandon a major concentration of Latino voters in Greeley to a district where their interests would be diluted," he said, referring to the previous map, which would have put Greeley in the heavily Republican 4th Congressional District.

Colorado’s independent congressional redistricting commissioners will either vote to adopt a redrawn map of the state’s U.S. House districts Tuesday, or else the most recent map drawn by their staff and released last week will be adopted by default.

TRAIL MIX | Redistricting has been kind to Colorado's congressional incumbents, except once

Since 1971, none of the state's sitting House members have wound up in hostile districts or found themselves drawn together with another incumbent. Except once, 50 years ago, when the redrawn map spelled defeat for the Coloradan who managed to carve out what could be the most congressional power ever wielded by a lawmaker from the state.