A new survey finds Coloradans in favor of the "safer-at-home" restrictions imposed last week by Gov. Jared Polis by a wide margin, with an even larger share of metro-area residents approving their local officials' decisions to extend stricter "stay-at-home" orders through this week.

The poll also shows other efforts to slow the spread of the coronavirus win overwhelming support, including nearly 80% of Coloradans agreeing that people should be required to wear face masks when they venture out in public to stores or workplaces.

The survey, released Wednesday by Colorado-based Democratic firms Keating Research, OnSight Public Affairs and Mike Melanson, found 68% of state residents approve of the new safer-at-home order, with 21% in opposition to the measure. In addition, 78% of the residents of Adams, Arapahoe, Boulder, Broomfield, Denver and Jefferson counties support extending stay-at-home order restrictions through May 8, with 16% opposed.

Despite much-publicized protests and calls to lift restrictions, support for requirements to limit gatherings and group activity cuts across the political spectrum, with registered Democrats, Republicans and unaffiliated voters all favoring the measures by large margins, according to the poll.

Through Tuesday, 903 Coloradans have died from the novel coronavirus, 2,919 have been hospitalized with the disease caused by the virus, and 17,364 have been infected, according to numbers released by the Colorado Department of Public Health and Environment.

The poll found a strong majority of 62% of Coloradans believe the coronavirus pandemic will lead to a long-term economic downturn that will last for years, compared to 26% who think the economy will quickly rebound from the virus and attempts to contain its spread.

Just over one-third of voters say their personal financial situation has worsened since the onset of the pandemic, and 58% say their situation is the same. 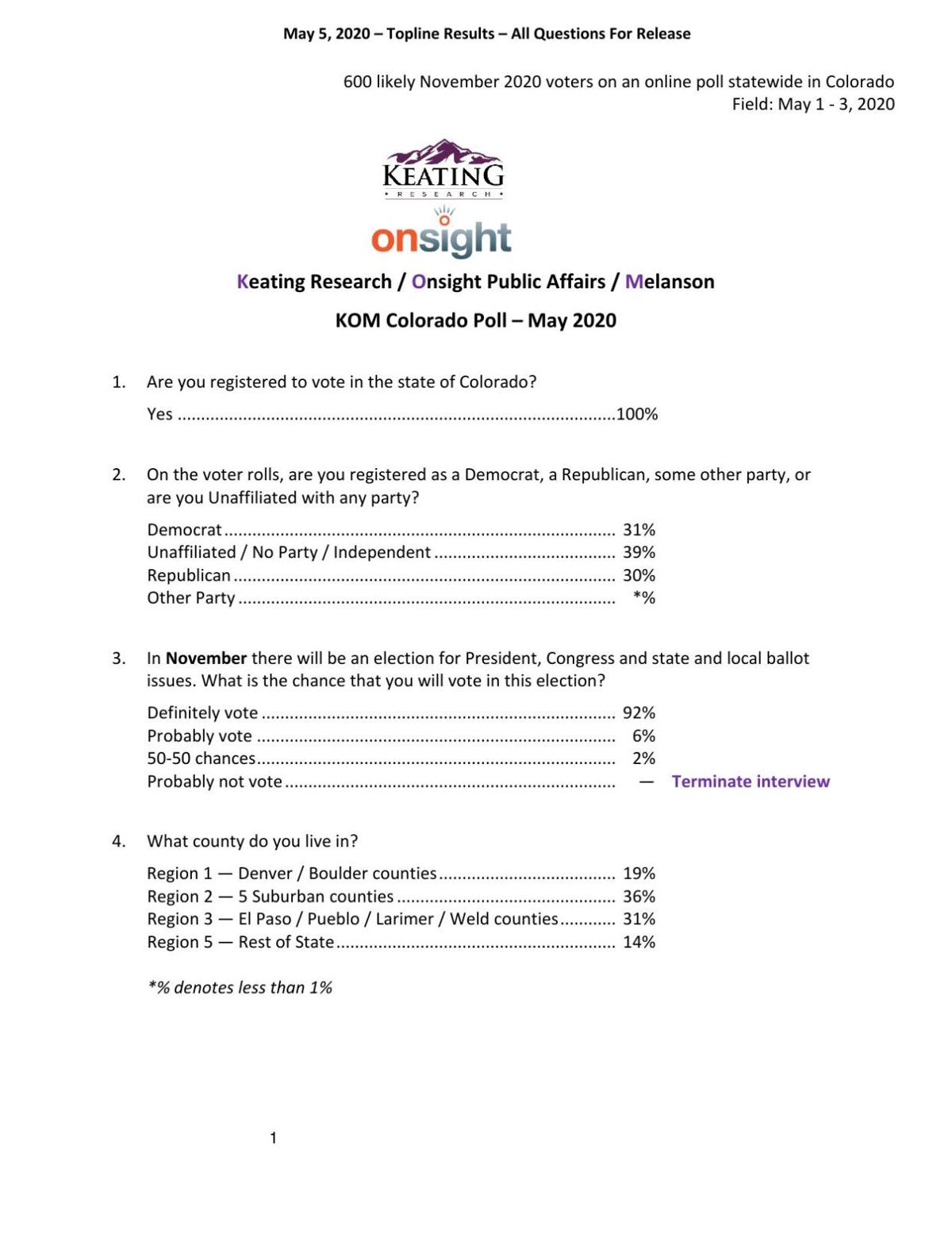 At the same time, however, the state remains optimistic, with 56% of residents agreeing that Colorado is headed in the right direction and 36% saying it's heading in the wrong direction.

Polis scored well with voters, with 71% approving of his handling of the pandemic, compared to 19% who disapprove. The governor has also seen his favorability increase to 66% from 50% in a survey conducted by the same pollsters last summer.

Denver voters give Mayor Michael Hancock marks nearly as high, winning approval from 69% and disapproval from 18%.

President Donald Trump, however, is upside-down with Colorado voters by several measures. Only 34% approve of the job he's doing on the coronavirus outbreak, while 59% disapprove. Asked to assign Trump a grade for his performance as president, 47% would give him an F, and just 17% say he should receive an A.

"This is a snapshot in time," pollster Chris Keating told Colorado Politics. "People in Colorado are so fed up with Trump and his shenanigans and the Lysol and waving his arms and siding with the protesters. They’re just fed up with it. They want good leadership."

Results of the poll released earlier on Wednesday showed former Gov. John Hickenlooper, a Democrat, ahead of Republican U.S. Sen. Cory Gardner by 54% to 36% in a hypothetical U.S. Senate contest. Former Vice President Joe Biden, the presumptive Democratic presidential nominee, was leading Trump by a slightly wider margin, 55% to 36%.

The KOM Colorado Poll of likely Colorado voters was based on a sample of 600 surveys conducted online from May 1-3, and the sponsoring firms paid for it. The margin of error is 4.0 percentage points.

Trump administration pushes back on Polis' claim about ventilators

"FEMA has not and is not seizing or taking supplies or personal protective equipment (PPE) from the state of Colorado or anyone lawfully engaged in acquiring or distributing PPE."