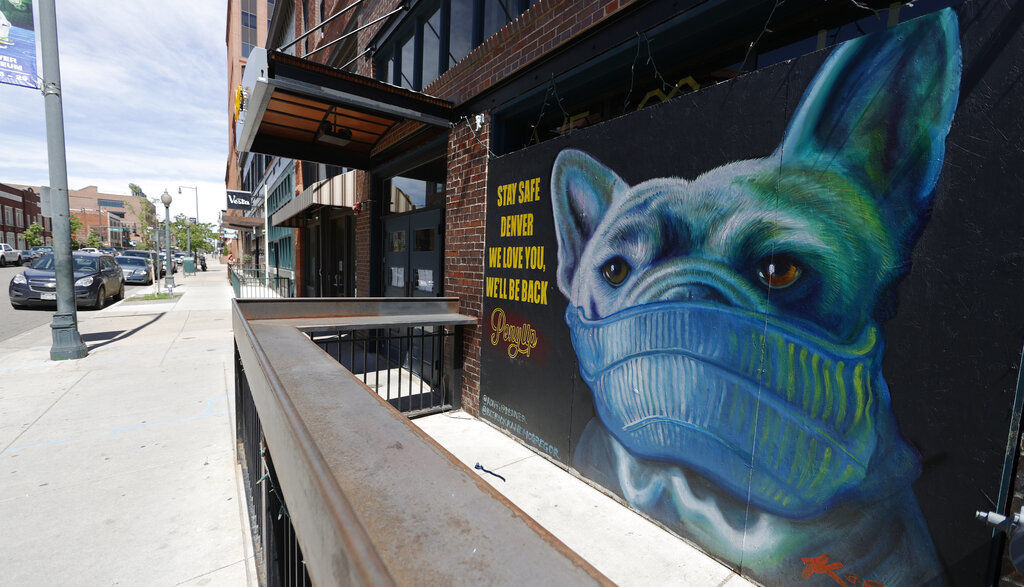 A lone pedestrian, back, walks on the sidewalk watched over by a dog wearing a face mask painted on the plywood covering the windows of a restaurant shuttered as part of the effort to stop the rise of the new coronavirus Wednesday, May 20, 2020, in Denver. 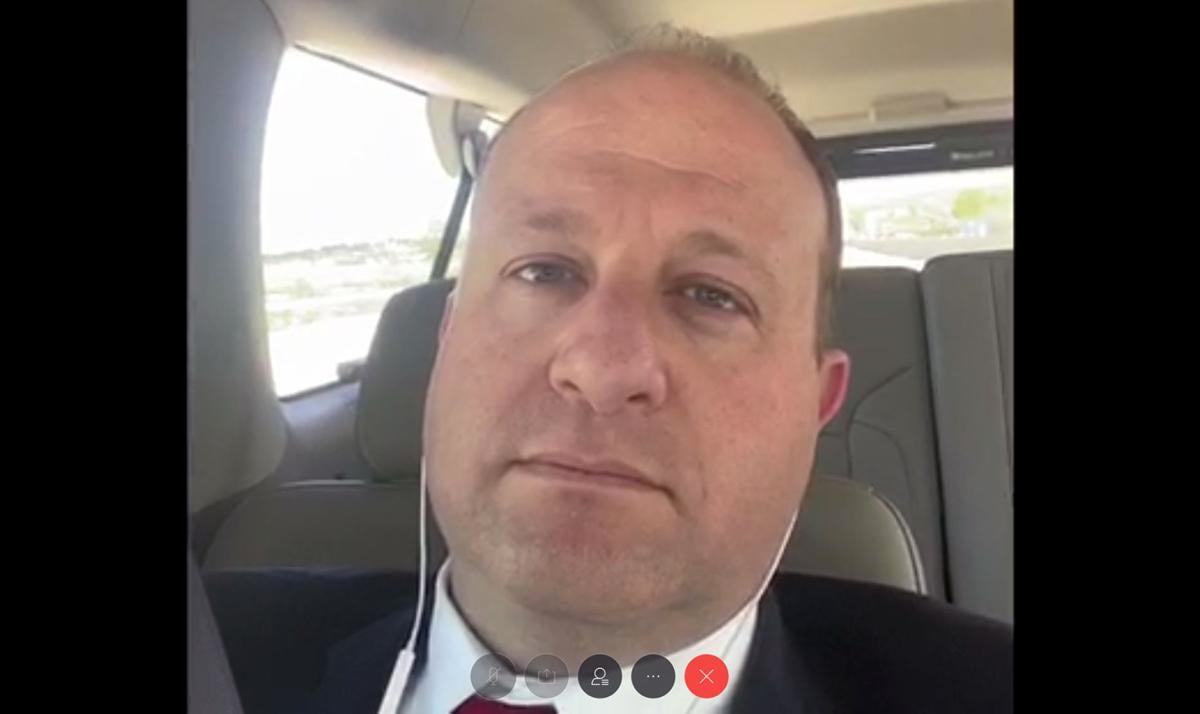 Gov. Jared Polis listens to a question from restaurant owners during an online town hall on Thursday, My 21, 2020, to discuss draft guidelines for reopening restaurants across Colorado, possibly by the end of the last week of May.

Gov. Jared Polis said Thursday that he anticipates restaurants will be able to reopen statewide by the middle or end of next week under guidelines his office plans to finalize over the weekend.

"I'm excited," Polis told restaurant owners during an online town hall. "Finally, we're nearing a time where you guys are going to be able to have customers and be open."

Since stay-at-home orders were issued in late March to stem the coronavirus outbreak, the restaurant industry has been badly wounded, losing an estimated $975 million in April, according to a recent survey by the Colorado Restaurant Association.

"Now I think the rest of the state is ready," Polis said.

Polis said he plans to release a final set of rules to govern restaurant operations by late Saturday after his office reviews feedback it will continue accepting through Friday. He hopes to announce "the exact date" restaurants can plan to start serving sit-down diners on Monday.

"Some data needs to flow in over the weekend, and we hope it's consistent with the data we've seen," he said. "Within a day or two of that, it should be fine to operate."

Once the rules are in place and restaurant owners know what they have to do to comply, Polis said, they should be able to start opening within days, since it could take a day or two to reconfigure their tables and train employees.

Polis discussed the timetable and fielded questions from restaurant owners about the guidelines in an online town hall sponsored by the Colorado Restaurant Association.

Draft guidelines released earlier this week proposed allowing restaurants to open with limited indoor capacity and extra spacing between tables. Restaurants would be encouraged to move tables outside, including into parking lots and along sidewalks and streets, where allowed by municipalities.

"Your customers are smart," Polis said. "If you have the good fortune of having a huge outdoor area and your tables are 10 feet apart, people are going to bring grandma and grandpa."

In addition, restaurants would have to take the temperature of every employee before shifts begin, with anyone showing symptoms of COVID-19 required to stay home. Parties would be limited to six diners, and employees would be required to wear face masks and gloves when interacting with customers and handling food.

"We are finding everything we can waive that gets in the way of doing your business outdoors," Polis said, acknowledging that not every restaurant has the opportunity to do so.

But for those that can, Polis said he wouldn't be surprised if some restaurants can serve customers at their full capacity.

"Nine out of 10 of our summer days are beautiful and appropriate for outdoor gathering," he said. "I want to make sure Colorado is in the forefront of having a dynamic, successful restaurant industry."

During the town hall, the owner of a Country Buffet in Centennial wanted to know if the state can help expedite a liquor license application to serve beer and wine. Polis said that wouldn't be as easy as loosening other rules, like allowing customers to pick up alcoholic drinks curbside at restaurants that already have a liquor license, but added: "There's certainly the will there for us to find out how to do it as quickly as possible."

Polis said he agreed with other restaurant owners who suggested the state revisit a draft rule to require that restaurants stop serving at 10 p.m. Being able to serve diners over a longer period, he said, would make it easier to keep them spread out.

The proposed rules won't apply to bars or clubs, which will still face restrictions on the number of people who can gather in public, but Polis noted that he hopes to revise those limits by "early June."

Even while sounding enthusiastic notes about the hard-hit industry moving back toward normal, however, Polis cautioned against assuming that opening the doors — or outdoor tables — to customers will lead to an influx of hungry diners.

"If the customers are there," he said. "In places where restaurants are open, we are not seeing people come out in close to normal numbers."

Polis added that he doesn't believe it's irrational for people to remain wary about resuming activities they've put on hold since March.

"People are being cautious, so it could take time," he said.

Pointing to current data that show 1 in 300 people in Colorado are currently contagious with the coronavirus, Polis said: "You and your workers need to treat everyone as though they're contagious."

Polis also stressed that, while the state is trying to bend over backwards to make it easier for restaurants to open — he offered to call any recalcitrant mayors to encourage them to open up streets and parks to outdoor dining — his administration plans to enforce the rules strictly.

He reminded those participating in the conference that restaurants that have violated shut-down orders have had their licenses suspended indefinitely, including a cafe in Castle Rock that opened its doors to crowds on Mother's Day and a restaurant in Rifle that defied an injunction obtained by the county health department last week.

"Everybody takes this very seriously," he said, adding, "A blemish on one of you is a blemish on all of you. When there are restaurants that people get infected at, it will scare customers from going out to restaurants for weeks."

Gov. Jared Polis issued draft restaurant reopening guidelines on Tuesday that, although still a work in progress while the state gathers stakeholder feedback, provide insight into what the new normal may look like when eating out.