A quick meeting on Wednesday between Gov. Jared Polis, real estate agents and the attorney general's office may have saved prospective homebuyers a mountain of headaches.

In order to comply with the governor's stay-at-home order to ensure proper physical distancing amid the coronavirus outbreak, a directive from the Colorado Division of Real Estate would have banned in-person showings, inspections, walk-throughs or any other part of the real estate transaction process, save for the closing itself. It was set to go into effect Wednesday.

For prospective buyers like the Arroyo family of Arvada, that created a nightmare situation.

Michael Arroyo, a retired police officer, had decided to downsize because of the hits to his finances since the COVID-19 outbreak and stock market crash. On April 3, his family listed their house and found a buyer almost immediately. A closing date was set for May 15.

After that transaction, they then turned to look for another home but ran into the directive from the Division of Real Estate, part of the Department of Regulatory Agencies. 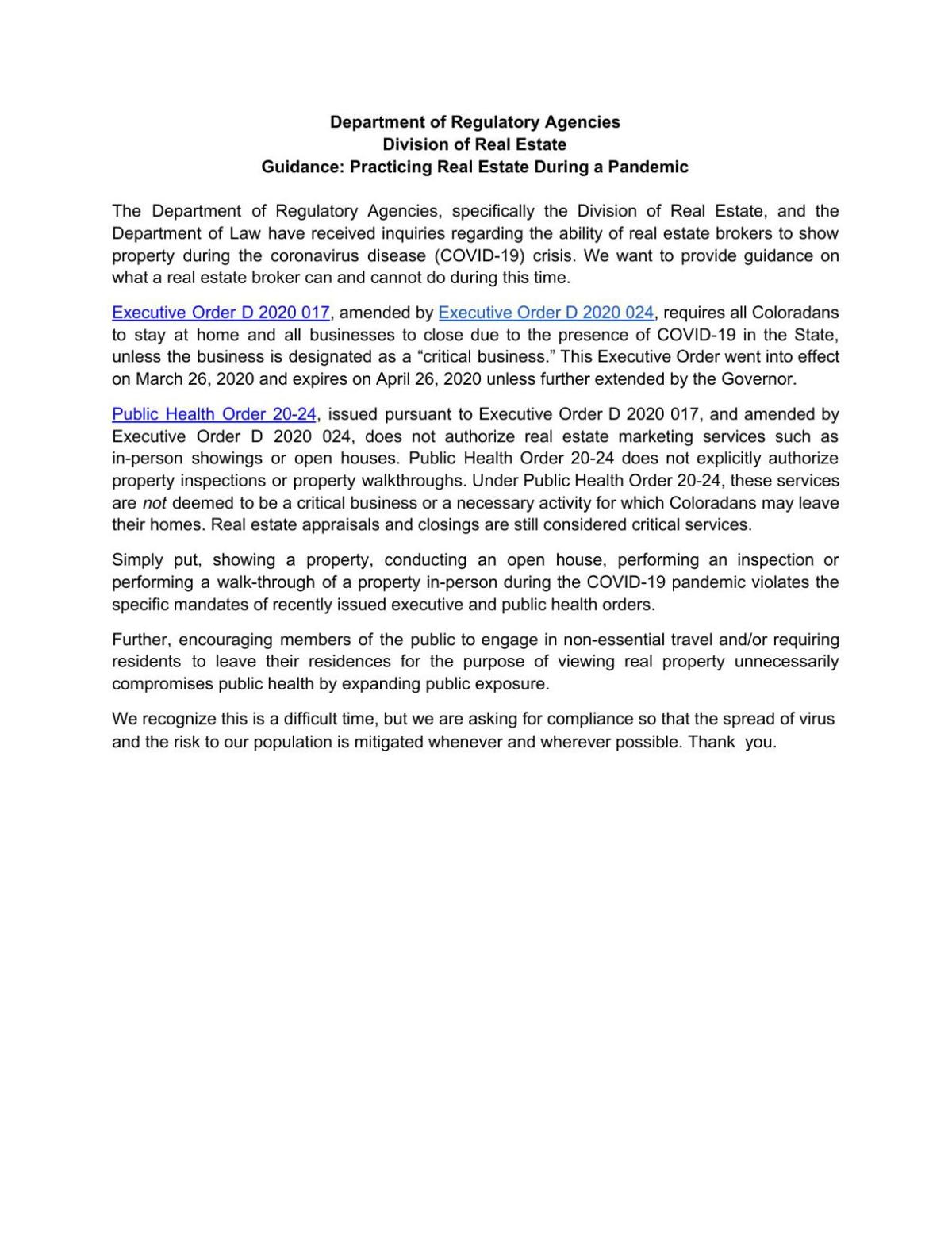 Both a March 26 stay-at-home executive order and a public health order issued in conjunction with the executive order, “does not authorize real estate marketing services such as in-person showings or open houses,” the advisory said. “Public Health Order 20-24 does not explicitly authorize property inspections or property walk-throughs. Under Public Health Order 20-24, these services are not deemed to be a critical business or a necessary activity for which Coloradans may leave their homes. Real estate appraisals and closings are still considered critical services. Simply put, showing a property, conducting an open house, performing an inspection or performing a walk-through of a property in-person during the COVID-19 pandemic violates the specific mandates of recently issued executive and public health orders,” the advisory states.

“The direction we received is that based on the attorney general’s latest visiting of that rule, in-person showings are no longer allowed,” said the Arroyo's real estate agent, David DeElena. What that means now is that a Realtor can’t even go to a seller’s home, he said. They can’t take pictures of homes, or even allow professional photographers to take those pictures, which are used to market the home and to entice potential buyers.

“That’s the scary part,” Arroyo told Colorado Politics. “We’re in a situation where it's tough to go out and purchase another home” without being able to physically see it. And who buys a home without actually walking through it? he asked. “No one wants to invest money in a home sight unseen. Pictures can be manipulated and might not show the true condition of the home.”

Arroyo said his options are limited. He and his family, which includes two grandchildren, could stay in a hotel or in the basement of a family member’s home, but basically they were going to be homeless on May 15.

The deal can’t be undone, DeElena said. The buyers had already given notice to the apartment complex where they live, so the closing date is not changeable.

“We were set to go house hunting this weekend and abide by the social distancing rules,” he said. They bought masks in order to do it. But for now, they’re on hold. 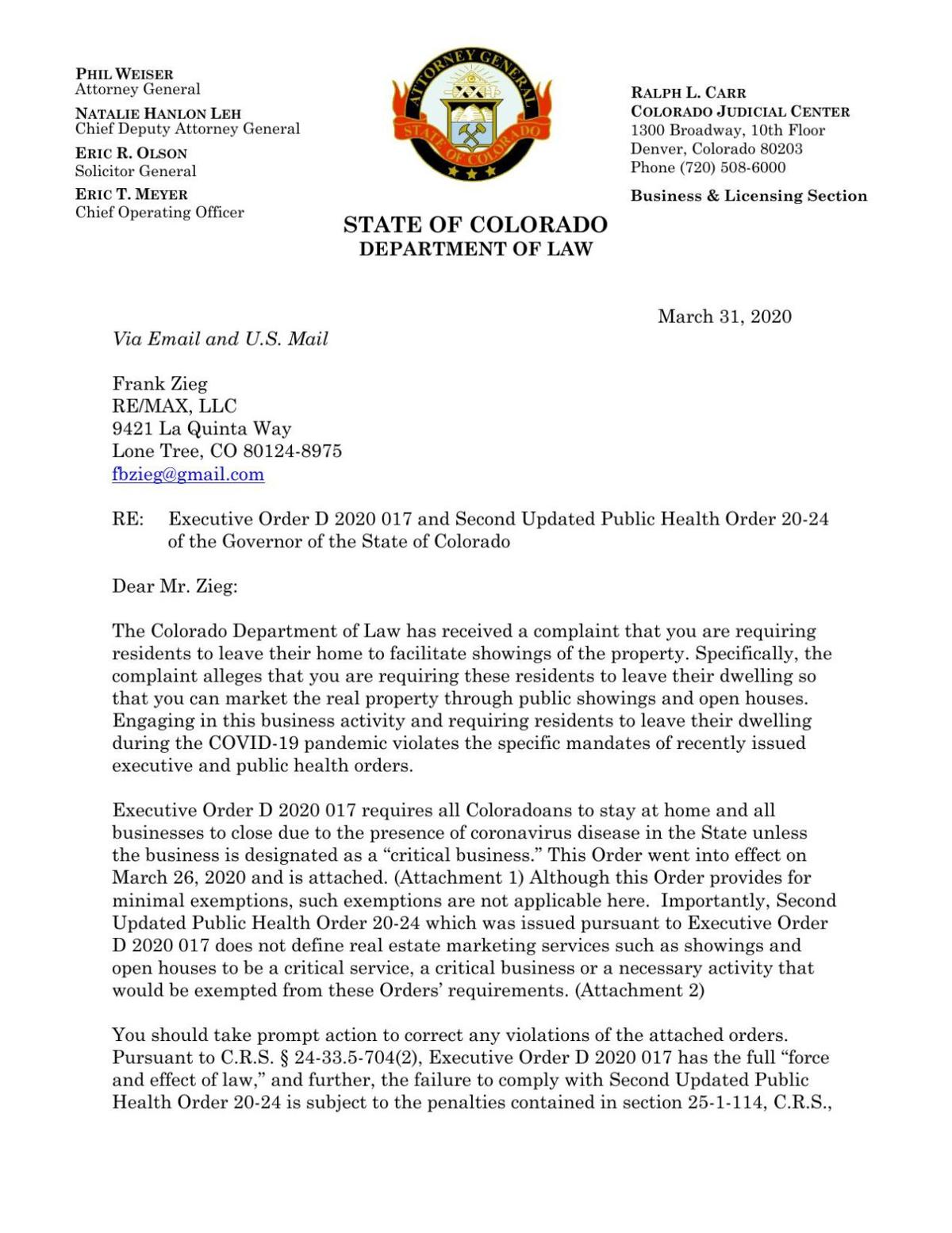 An April 8 joint letter from the Colorado Association of Realtors, title companies and mortgage lenders asked Gov. Jared Polis to rethink the limitations. Real estate services “should be clarified to be limited in nature to include any critical aspect of the real estate transaction such as property inspection, final walk-throughs and showings only if they can be done with virtual technology that would not violate the social distancing precautions under the shelter in place requirements.”

The joint letter agreed that open houses violate social distancing requirements, but other aspects of real estate transactions “can be undertaken safely by virtual tours, video technology and remote technology" and "should be allowed to continue as many other states have allowed.”

The letter warned that the prohibition of real estate transactions could have “devastating short and long-term impacts” on Colorado’s citizens and economy, and could impact industries far beyond real estate, including construction, permitting, lending, inspections, appraisals, construction, and title/closing services.

Adams County Commissioner Steve O’Dorisio heard about the problems from a constituent, realtor Sam Biller of Keller Williams. O’Dorisio, who does not speak for the county commission, said “you definitely shouldn’t have open houses,” but realtors can certainly address the health and safety issues.

"We can’t get a photographer into a house, go into vacant homes or even position a home to sell,” said Sam Biller of Keller Williams, who brought the issue to O’Dorisio’s attention. “You can buy weed or alcohol or firearms, those are essential services,” but buying a home is not?

Biller said he is dealing with a home owned by someone who died, and the house has been in and out of contract. The family is trying to take care of the funeral and those costs and would like to get this issue resolved.

But “we're getting mixed signals” from the administration. “Nobody is allowed into a home. Our hands are tied,” Biller said. “People are trying to be positive and think outside the box on how to market” homes. “There should be other workarounds to get access.”

“Health and safety is first and foremost, but isn’t there a way to do it within the confines of these rules?” O'Dorisio asked.

In a news conference on Wednesday, the governor was asked by Colorado Politics about the real estate transactions issue. Polis insisted that homes would continue to be bought and sold, and that there was no prohibition on inspections or any other part of the home-buying process.

The advisory appears to have been shelved shortly after the press conference. Sources told Colorado Politics that the questions raised Wednesday prompted discussions among the attorney general's office, the governor's office and the Realtors.

Polis spokesman Conor Cahill said Thursday that "thousands of Coloradans are successfully buying and selling homes during this crisis. The Governor has instructed us to maximize economic productivity while minimizing physical proximity. To help prevent misconceptions that might affect normal transactions, the Department of Regulatory Agencies (DORA) will be issuing further guidance to make it even clearer that homes can be bought and sold during this pandemic.

"In short, the guidance will reiterate that elements that are fundamental to a real estate transaction are deemed critical to support market activity, which includes real estate appraisals, title work, inspections and closings. Non-critical activities, such as conducting an open house in-person during the COVID-19 pandemic put individuals at unnecessary risk and should be avoided in light of the 'Stay at Home' Executive Order and the Public Health Order on the temporary closure of non-essential businesses.

"At this time, we are encouraging professions of all types to get creative about the ways in which they can conduct business virtually until we are able to allow these Orders to expire."

Both Polis and DORA Executive Director Patty Salazar plan to talk to the Arroyos and to Biller on Thursday, Cahill said.

The state’s largest real estate trade association with more than 29,000 members said the policymakers' work on the issue benefits current and future homeowners, including increasing access to information vital to the buying process and increasing transparency about property tax obligations, as well as how the legislature invests in housing across the state.

Those who offer in-person worship must follow safety guidelines, including limiting gatherings to 10 people or less, encouraging congregants to wear non-medical masks, observe strict social distancing and sanitize all equipment according to federal and state public health requirements.