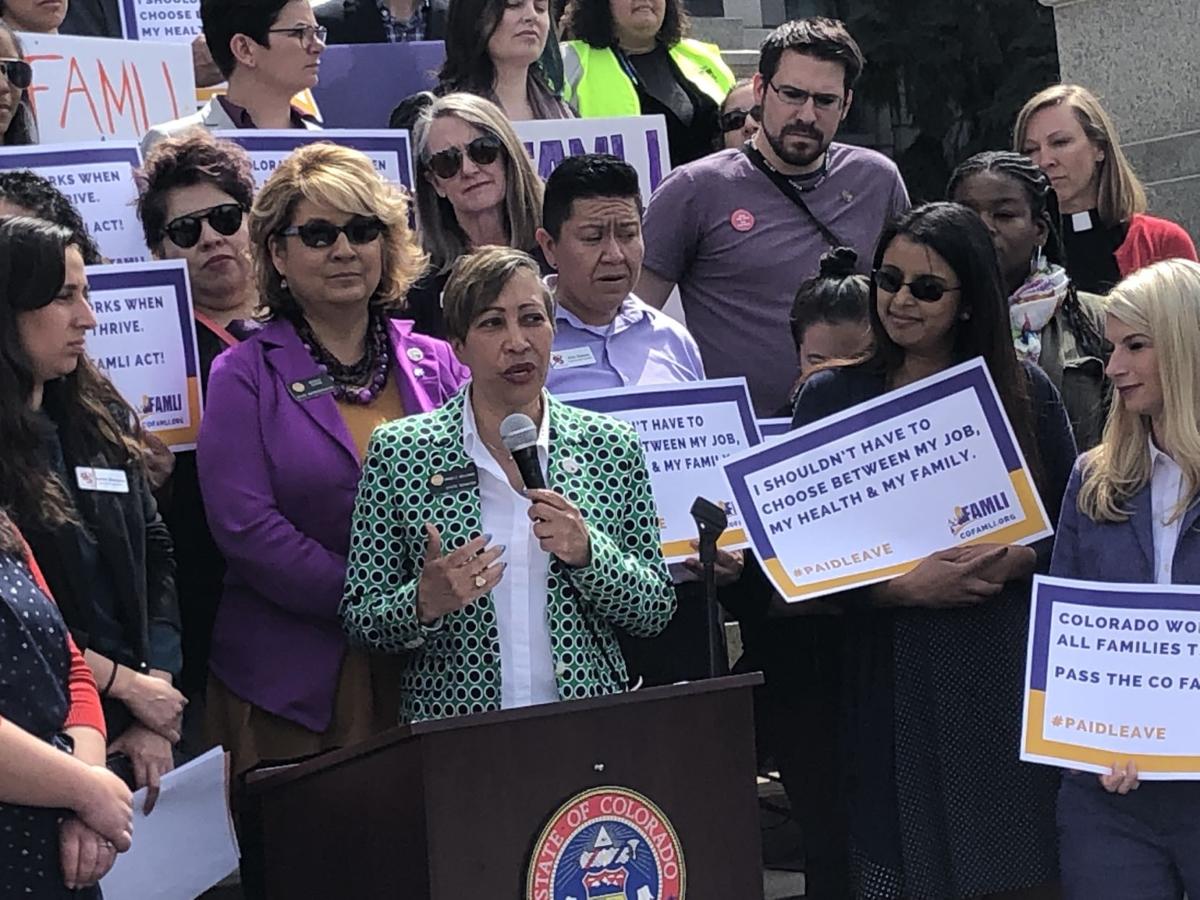 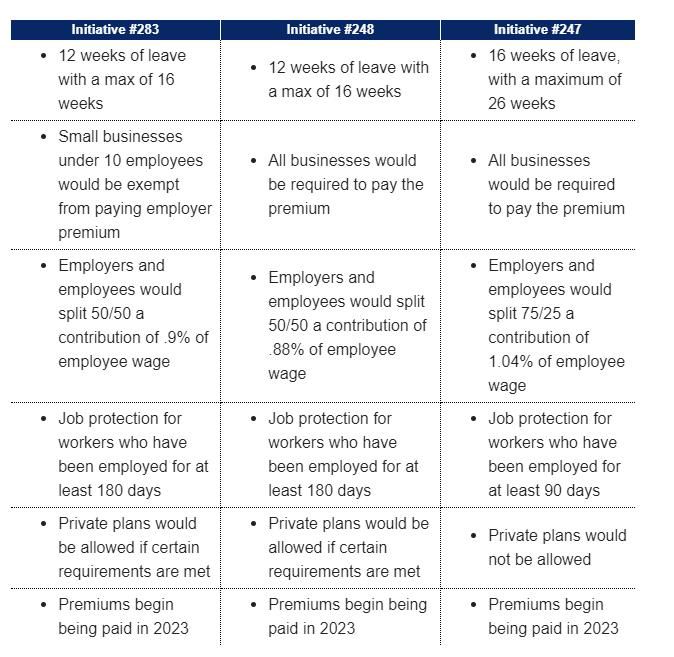 The four sponsors of a Democratic-led proposal at the state Capitol have abandoned their legislative proposal and are now endorsing the three ballot measures proposed by Colorado Families First. According to state Rep. Matt Gray of Broomfield, they don't have a preference and will endorse whatever the ballot proponents put in front of voters.

The four lawmakers talked to reporters Friday about the reasons for letting go of their five-year effort to put a paid family and medical leave program into state law and why they're backing the ballot measures.

The court orders on ballot initiatives 247 and 248 dealt with a challenge by Kelly Brough, president and CEO of the Denver Metro Chamber of Commerce, which claimed the programs proposed under the ballot measures were a tax and hence violated the provisions of the Taxpayer's Bill of Rights, which require voter approval for any tax increase. The language of all three ballot measures do not reference TABOR requirements.

Colorado Families First spokeswoman Lynea Hansen told Colorado Politics Friday that the next step in the process is to start circulating petitions* for one of the measures. that's on hold until the legal challenge on the third measure, ballot initiative 283, is completed. Briefs on that measure, which are similar to the two ruled on Friday by the Court, are due by May 5 and May 20, Hansen said.

During the legislative session that went on hiatus in March, Gray said the sponsoring lawmakers for paid leave had worked out an agreement with Gov. Jared Polis, who favored a private market approach that hasn't been tried before. But that never sat well with the sponsors, who favored what they call a social insurance model, which is much closer to what the proponents of the ballot measures favor.

"We hit hiccups" with the private market plan, Gray explained, due in part to the governor's attention being diverted to dealing with the pandemic. "They didn't have the bandwidth" or staff to continue to work on this, Gray said. A similar problem cropped out for the private insurance market, which is also dealing with the impacts of COVID-19.

The sponsors went back to the social insurance model, which has more experience. But as conversations with the business community progressed, Gray said it became clear that no matter what the sponsors proposed, the business partners would not be able to agree to the level of benefits the sponsor thought was necessary.

The three ballot measures propose the following (and at some point the proponents will pick one):

Gray added that the need for paid leave is urgent during the pandemic, which he called a choice for workers between going to work sick or being able to pay the rent.  "We're not willing to compromise on core values or to delay" any further. "This is the exact time to deal with this" and to let the ballot measures pick up the load instead of trying to get a bill through this year.

Speaker of the House KC Becker of Boulder has told lawmakers and reporters that any bill with a cost to the state is basically dead in the water for the remainder of the 2020 legislative session.

The proposal advanced by the lawmakers would have required significant increases in staffing at the state's Division of Insurance. Sen. Dominick Moreno of Commerce City, the vice-chair of the Joint Budget Committee, also was a sponsor of the paid leave proposal, but said Friday that any new costs for increasing staffing "is out of the question in this current environment."

Those budget constraints also played a role in the sponsors dropping their efforts. Sen. Faith Winter of Westminster said that the social insurance model proposed for the ballot is an enterprise and would be self-funded and would have no impact on the state's general fund.

She added that the pandemic is a "mirror on the economy" that shows just how fragile the economy is and how fragile is the support for workers. "COVID-19 has exposed these issues," Winter said. Had the legislature passed a paid leave bill several years ago, it would have been a tool for businesses and their employees now.

"We've worked on this for six years," Winter said. "Enough is enough."

Winter also pointed to a national poll, released Thursday, that said 83% of those surveyed support paid leave. The poll, from the left-leaning Roosevelt Institute, showed broad support for paid leave among all voter types. The poll drew from a sample of 1,000 voters and was conducted April 13-16.

The next step — getting a proposal onto the ballot — would not be easy under normal circumstances, but collecting signatures in the midst of a pandemic is a whole new challenge. Winter said she is confident that signatures can be collected in an era of social distancing but acknowledge it will take a lot of effort. "In a pandemic, democracy is still important," she said. Gray added that those most concerned about following public health guidelines are also the same people most concerned about having access to paid leave.

"We will be champions" for whatever ballot measure is selected, Gray said. "All of the three are better than the absolute nothing we have now."

Gray also suggested that the financial challengestied to ballot measures may also look differently in 2020. Businesses that would normally put resources into challenging the ballot measure — either the signature process or the campaign for or against in the fall — aren't as likely to have those resources to expend because of the economic downturn.

As to the governor's support, Gray said, "Ask him."

Lawmakers also addressed the paid leave currently available through the federal CARES Act, pointing out that even if the pandemic continues into 2021, the program runs out at the end of 2020.

"If you believe COVID-19 will be gone Jan. 1, 2021, you're wrong," Gray said. The federal program is a "broadly inadequate short term solution."

Winter predicted that the business community will come out against the proposals, and said that no matter whether the economy is up or down, their reaction will be that "now is not the time."

The Colorado Chamber of Commerce, which had been part of the business coalition for the 2019 task force on paid leave, issued a statement Friday criticizing the lawmakers for endorsing the ballot proposals.

"It’s disappointing that interest groups have chosen to pursue a billion-dollar program in the middle of an economic crisis,” said Loren Furman, the chamber's senior vice president of state and federal relations. “The business community came to the negotiating table in good faith to find a thoughtful legislative solution, willing to compromise in order to strike the right balance for a family and medical leave program that works for Colorado.

"Proponents should understand that any new costs on employers will directly impact their ability to recover from this crisis, Furman said. "Benefits like paid leave are meaningless if Coloradans don’t have stable employment. We need to be focusing on helping people get back to work – now is not the time for a massive and expensive new state program paid for by businesses."

“After more than six years of working to secure paid family and medical leave for all Coloradans, we can’t afford to wait any longer," said Sen. Faith Winter in a statement Thursday night. "It is time to take the power out of the lobby and give it back to the people of Colorado.”