Outbreaks in nursing homes, which account for 64% of the state's coronavirus deaths, have hit facilities that received more citations from the state for deficiencies of care, according to an analysis of data provided by the Colorado Department of Public Health and Environment.

Out of the 123 facilities listed in its report, which also now include meat packing plants, jails and correctional facilities and even apartment buildings, 109 are those housing the most vulnerable: nursing homes, rehab centers, assisted living and senior independent centers and group homes.

Many nursing homes — defined here as having at least one bed licensed for care — have received citations from state regulators, across a variety of possible deficiencies. However, a comparison of facilities on the outbreak list and the state’s nursing home citation database shows that facilities with outbreaks had twice as many citations from 2017 through 2019 as others.

The nursing homes with outbreaks had more citations for staffing issues, such as physical and verbal abuse, misappropriation of property and neglect, as well as brain injuries. The state’s citations can be issued for other deficiencies, such as missing persons, other injuries, drug diversion and anesthesia complications.

When Gov. Jared Polis issued the disaster emergency order on March 11, the Colorado Department of Public Health and Environment issued a public health order the following day, ordering that visitors be restricted in non-hospital health care facilities. Only essential visitors, such as vendors or “individuals necessary for the physical and/or mental well-being” of the residents would be allowed in. 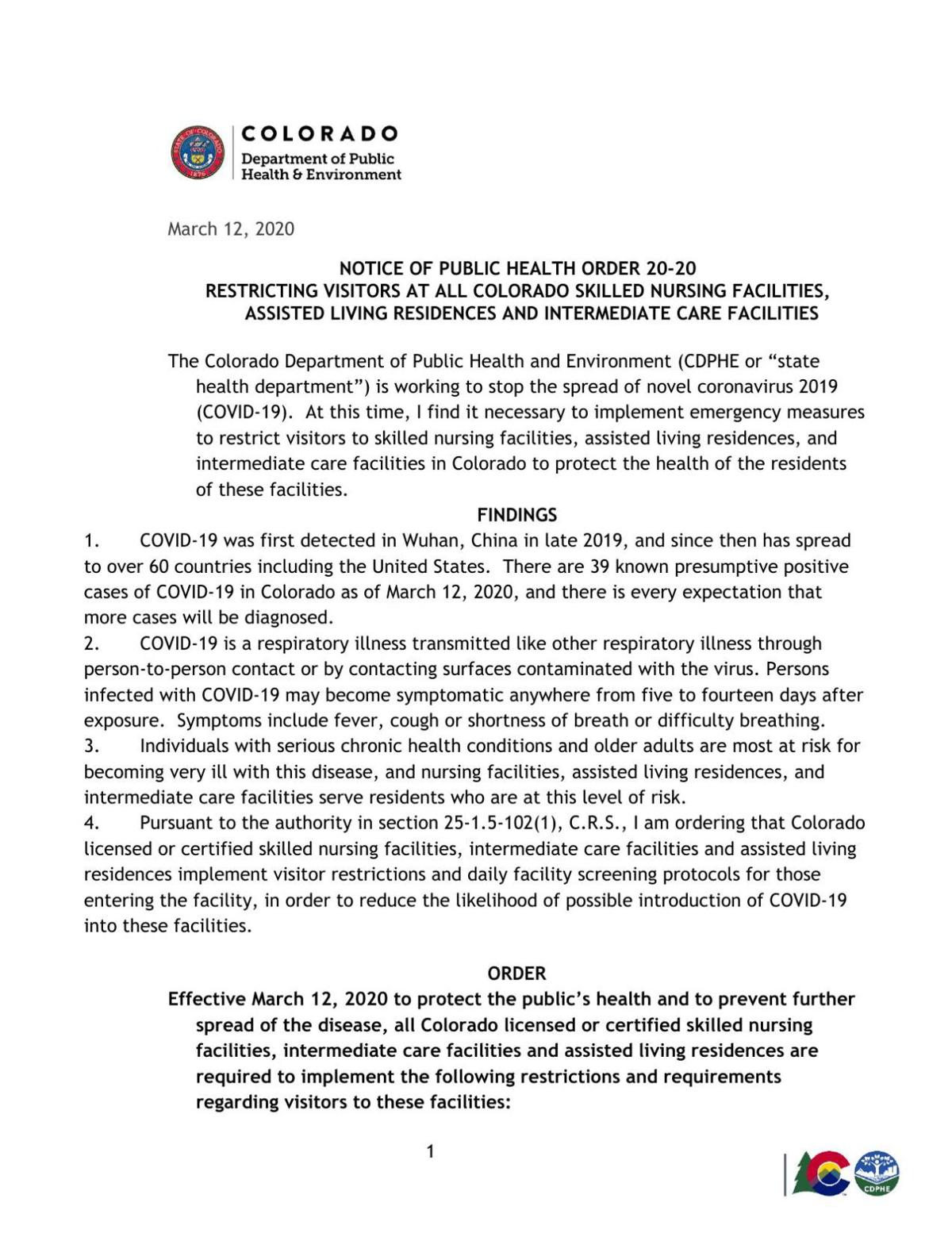 That order further said that all essential individuals entering those facilities would have to be screened, which has included checking the temperature of anyone coming in.

As of March 31, 19 days later, the CDPHE reported outbreaks at 14 facilities.

One month after the March 12 public health order restricting visitors, the number of outbreaks had grown to 72 and more than 300 Coloradans had died.

As of Wednesday, 508 people had died, and according to data supplied by the CDPHE, 323 were residents of those non-hospital health care facilities.

Polis was asked repeatedly through the month of March and April by Colorado Politics and other reporters what he was doing about the rising number of outbreaks. His standard response was to point to the March 12 order restricting visitors.

But data from CDPHE shows that the problem might not have been the visitors.

Winslow Court, an assisted living residence with 128 beds, began reporting infections on April 1, according to the CDPHE. As of April 22, the facility has had 23 residents test positive or presumed positive, a case to bed-count ratio of 18%. In addition, 12 staff members tested positive, and 10 residents died.

Laurel Manor began reporting even earlier, on March 20. The skilled nursing facility with 81 beds has had 17 residents with COVID-19, on a per-bed basis, that’s 21%. In addition, 29 staff members have tested or presumed positive, and 10 residents have died.

The number of staff in each facility is unknown.

After a month of increasing outbreaks — and the number of outbreaks has more than doubled in just the past two weeks —  Polis last Friday issued an executive order directing the Colorado National Guard to start COVID-19 testing in three of the state’s largest nursing homes that had not yet had outbreaks. All have more than 200 residents per facility.

Polis said Wednesday that the first test results showed previously undetected cases of COVID-19, although he didn’t say how many or in which facility.

In a statement to Colorado Politics, Polis spokesman Conor Cahill said “sadly, it is not surprising that we’d see this virus spread to Colorado’s nursing homes.”

One of the first actions the governor took was to “swiftly implement emergency measures to restrict visitors to skilled nursing facilities, mandated symptom screens and temperature checks for all staff and vendors entering assisted living residences, and intermediate care facilities in Colorado to protect the health of the vulnerable individuals living in these facilities.”

That order has since been updated, Cahilll said, to include mandatory face covering for all individuals and mandatory isolation plans. “Because we know that some of our most vulnerable residents live in long-term care facilities, CDPHE has been conducting infection control inspections since the original public health order."

Doug Farmer of the Colorado Health Care Association, the industry group for nursing homes, said the data doesn’t identify whether a resident infected a staff member or vice versa.

Part of the problem, according to Farmer, is staffing. “It’s a real challenge, especially as people learn about the virus,” he said. “Lots of people are making decisions about whether this is work they’re willing to do.”

Some facilities have adjusted sick leave benefits to ensure that sick  workers come back once they’ve recovered from the virus, Farmer said. But sick leave policies vary from facility to facility, and he said employers are doing as much as they can to help employees who contract the virus.

Farmer’s organization has requested waivers from various state agencies to allow for more staffing flexibility and detailed information on outbreaks to inform health care workers where there are active cases in their areas, especially for those who work in multiple settings.

The CHCA also asked Polis for guidance on transferring COVID-19 patients from hospitals to nursing homes. According to the CHCA, hospitals are putting pressure on nursing homes to take patients without test results “in the interest of freeing up” hospital bed space. The CHCA asked the governor to declare that no hospital patient transfer to a nursing home unless the facility has already developed a separate specialized unit for treating COVID-19 positive patients.

On staffing: the CHCA asked that the governor authorize an Emergency Certified Nurse Aide certification through the Department of Regulatory Agencies. Those aides could do more limited tasks than a regular CNA, the CHCA said. They also asked that the state waive requirements around background checks, which currently require the facility to have the results of the check before the employee can start working. The CHCA asked that the state allow those employees to start working first, and to hold off on in-house training and orientation until after the employee has started the job.

But the biggest ask may be that the state waive minimum staffing requirements for the duration of the COVID-19 event “so that providers are not punished for a lack of available certified and licensed workers.”

AARP, while applauding the more recent actions, believes the state is not doing enough to protect nursing facility residents and staff.

AARP Colorado State Director Bob Murphy said Thursday they are concerned about the rapid spread of COVID-19 and the rising number of deaths in nursing homes and long-term care facilities. More must be done to protect both residents and staff.

AARP also called on the state to be more transparent with families on the care being provided. “AARP has repeatedly called for virtual visitation to help residents stay connected with their families. We also urge clear and timely communication when residents and staff are diagnosed with coronavirus,” Murphy said.

In the April 22 letter to Polis, AARP’s Kelli Fritts, associate state director for advocacy, asked the state to be more transparent around identifying facilities with cases among residents and staff, more guidance around involuntary transfers and discharges of residents, more access to personal protective equipment, prioritizing testing for staff, and providing virtual visits for residents and their families

Staffing Nursing Homes Was Hard Before the Pandemic. Now It’s Even Tougher.

Residents have fallen ill with the new coronavirus in both the Worcester, Massachusetts, nursing homes where Kwaku Tsibo Bondah works. Protect…

Gov. Jared Polis, echoing public health experts who believe COVID-19 will last a while, said on Friday that he expects the virus to continue through the summer and into the fall.