Jury trials in Denver have been put on hold until early January, following a spike in coronavirus cases and a return for the city to Safer at Home level 3. On Friday, 2nd Judicial District Chief Judge Michael Martinez put a hold on juror summonses for trials until Jan. 4, 2021.

“The decision to suspend the summoning of jurors to our courts is not one undertaken lightly,” Martinez explained in his Oct. 30 order. “Due to the ongoing health issues related to the COVID-19 pandemic, it is inappropriate at this time for the courts of the 2nd Judicial District to continue hearing jury trials.”

“Judge Martinez has to weigh the health of his staff, attorneys, jurors and anyone else who has business in the courthouse against the accused’s constitutional right to an open, public and speedy trial,” Denver criminal defense attorney Ryan Brackley told Colorado Politics. “There is an incredible amount of tension between those two goals.”

Other Colorado judges have been wrestling with keeping the judicial system moving forward during the pandemic. The 17th judicial district, which includes Adams County and Broomfield, suspended jury trials until Dec. 7 and Boulder County continued all civil trials until June 2021.

When trials do happen, the coronavirus is forcing changes like nothing ever seen before, and the risk of mistrial is always a possibility. Juror deliberation often requires two courtrooms to account for social distancing, some courthouses are using Plexiglas to separate witnesses from attorneys and judges and exhibits are often handled with gloves or using hand sanitizer. In some jurisdictions, anyone who starts showing COVID-19 symptoms are required to produce a negative test. If a juror tests positive, the entire jury must be quarantined. Trials have been postponed when attorneys have become infected.

Brackley, who has worked as a prosecutor in Boulder and Denver, is a veteran of courts in crisis. He was deputy bureau chief in the Manhattan DA’s office in September 2001 when two planes hit the World Trade Center.

“Overnight, everything ground to a halt,” remembered Brackley. “We worked together as a judiciary and defense bar to figure out a way to move forward in a fair and just way.” He says the Sept. 11 suspensions only lasted for weeks, though, whereas the pandemic has been affecting the court system for months with further uncertainty going into the new year.

Michael Dougherty, District Attorney in Boulder County’s 20th Judicial District, says the backlog of trials due to pandemic hiccups is a constant concern, “Despite the pandemic, we’re doing the best that we can right now trying to balance what’s justice in the time of the pandemic.” 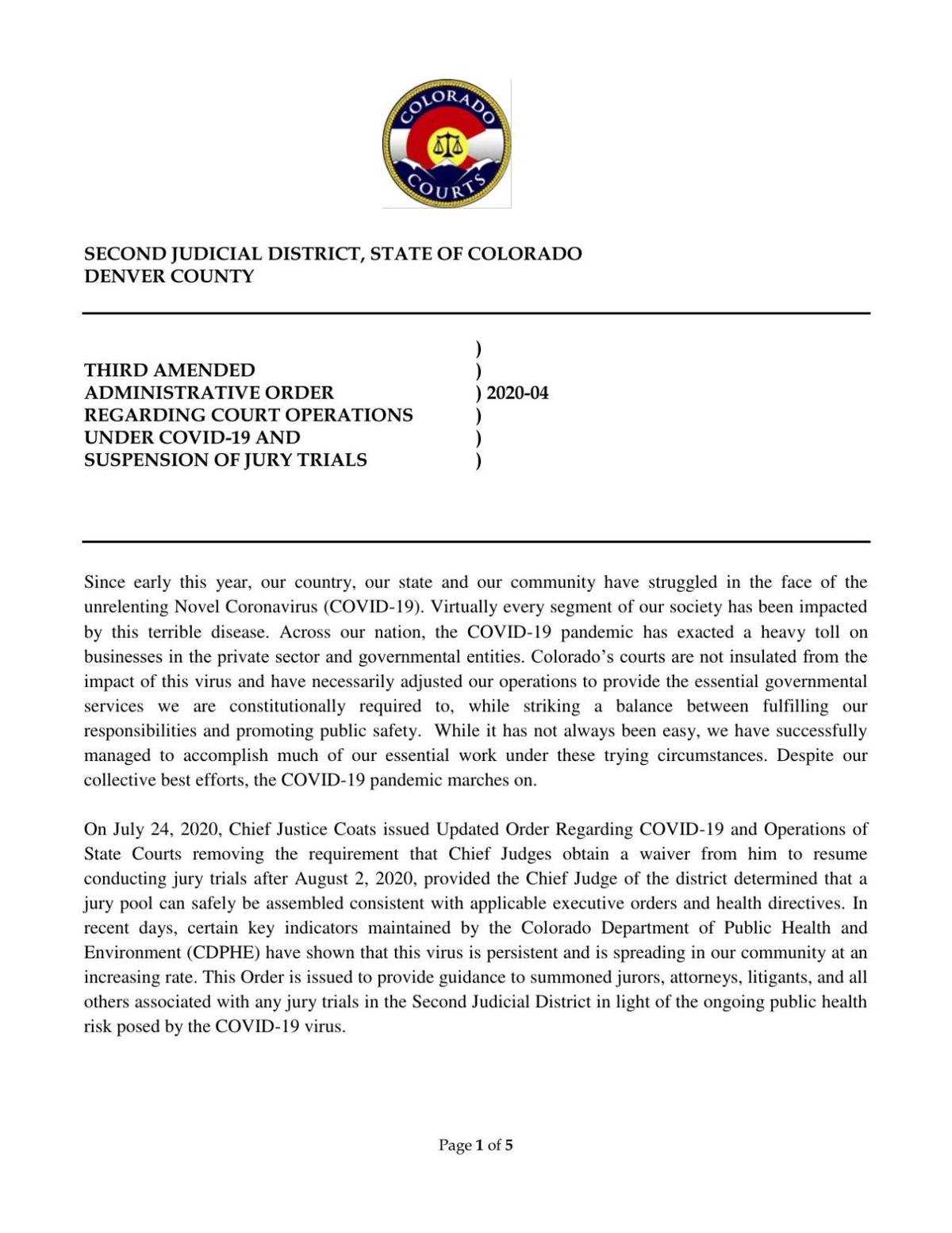